With the primary purpose of the X31 being small size we find that the front of the system is home to only the two latches which hold the screen shut while closed. Again, we have been somewhat spoiled by desktop replacement notebooks which typically have speakers and occasionally CD player controls on the front of the system but at the same time we realize that such features are not possible in a unit the size of the X31. Truthfully, we are more than ok with that. We would take the X31's size over some trivial features any day.

The left side of the X31 is more robust than the front of the system. First up is the unit's IR window and unpowered, 4 pin IEEE-1394 firewire port. It was nice to see the X31 come with firewire support especially considering that we would have likely forgiven the system for not having one as a result of its small size. Above both these ports, on the LCD panel, you may notice a long piece of plastic in the shape of a rectangle. Under here lies one of the two wireless antennas that compose the UltraConnect Antenna. The antennas support multiple frequencies and the system can actually dynamically chose which antenna to use depending on signal strength. In our use of the system we casually noted that the wireless reception of the X31 seemed very good.

Also on the left side is a single type-II PCMCIA slot. Fitting two slots into a system this size seems almost impossible and the single PCMCIA slot was a sacrifice we were more than willing to make to get a unit as small as the X31. We were surprised and pleased to find that the system also has a compact flash card slot below and to the left of the PCMCIA slot. With the prevalence of digital cameras today it was nice to see the X31 include the compact flash slot, especially considering that the X31 will likely accompany you on trips along with a digital camera with limited compact flash storage capabilities.

Above the compact flash slot are the standard audio jacks: one for microphone in, one for line out, and one for headphones out. Finally on the left side is one of the two USB 2.0 ports the system has and a few small passive cooling vents.

The back of the system is home to the remaining ports on the X31. First up are the internal modem and ethernet jacks of which the ethernet jack has a set of status lights below it. Then, after a row of passive cooling vents, comes the second USB 2.0 port, followed by the VGA-out port, parallel port, and power port.

The right side of the system is really only home to a Kensington lock port. One can also see the cooling solution employed by the X31 on this side of the system, indicated by the large vented area that serves as an exhaust for the heatsink fan. Also present is the second UltraConnect Antenna which is visible as a long rectangle on the LCD panel.

Flipping the X31 over reveals the system's internal speaker along with a few other items. The speaker is located on the bottom front right side of the unit (left side on the picture below) and is among the smaller speakers we have seen on laptops to date. The system only has one speaker meaning mono sound is the best you are going to get; muffled mono sound actually. By mounting the speaker on the bottom of the system the X31 projects sound not to the user's ears but rather to the surface the laptop is on. The battery feet keep the speaker from lying directly on the work surface by a few centimeters allowing at least some of the sound to channel away from the unit. Sacrifices like these are ones we are willing to make on ultraportable solutions but they do need mentioning.

The system battery is located in the front of the unit and easily released. The battery proved to be a 10.4V 4.4AH Lithium Ion battery pack. Along with the system battery, the hard drive in the X31 is fairly easy removed by unscrewing a single screw and sliding the drive out.

The access panel in the middle of the system is home to the unit's 2 SODIMM slots, both of which are user accessible. Our system came with one of the two SODIMM slots populated with a 256MB stick of memory leaving the second expansion slot free. Behind the access panel is the docking station port, covered while not in use by two springed doors. The metal behind the docking port and at the front of the system are used as additional electrical connections for the docking station, likely acting as grounds.

The bottom of the system is composed entirely of metal which adds greatly to the units structural integrity. 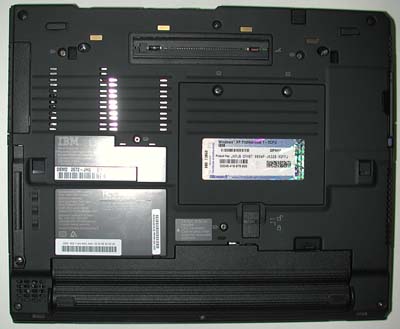 The IBM X31 fits the definition of ultraportable by measuring 10.7" x 8.8" and 0.98" thick at the front of the system and 1.19" thick at the rear. In addition, the system weighs a mere 3.6 pounds. That makes it less weighty than many of the books we find ourselves traveling with. It also makes the X31 over a pound lighter than the IBM T40, its thin and light counterpart. It is amazing how much power that IBM was able to pack into the X31 as we will see now beginning with a discussion of the hardware behind the system.