Huawei’s recent flagship phones, including the Mate 8 and P9 models, deliver a combination of good system performance and battery life thanks in part to HiSilicon’s Kirin 950/955 SoCs, whose physical implementation of four ARM Cortex-A72 CPUs on TSMC’s 16FF+ FinFET process gives them the edge in efficiency over Samsung’s Exynos 8890 and Qualcomm’s Snapdragon 820 with similar or better IPC.

The Mate 9’s updated Kirin 960 SoC still uses a big.LITTLE CPU configuration on a TSMC 16nm FinFET node, but its four Cortex-A53 CPUs get paired with four of ARM’s latest A73 big cores. The small shift in product number is deceptive; the A73 actually uses a vastly different microarchitecture than the A72. One of the bigger changes is a reduction in decoder width: 2-wide instead of 3-wide like the A72. This sounds like a downgrade on paper; however, by reducing latency in the A73’s front-end with a shorter pipeline, including 1-2 fewer cycles for the decoder, and making improvements to the instruction fetch block and memory subsystem, the A73’s instruction decode throughput may actually increase relative to the A72. 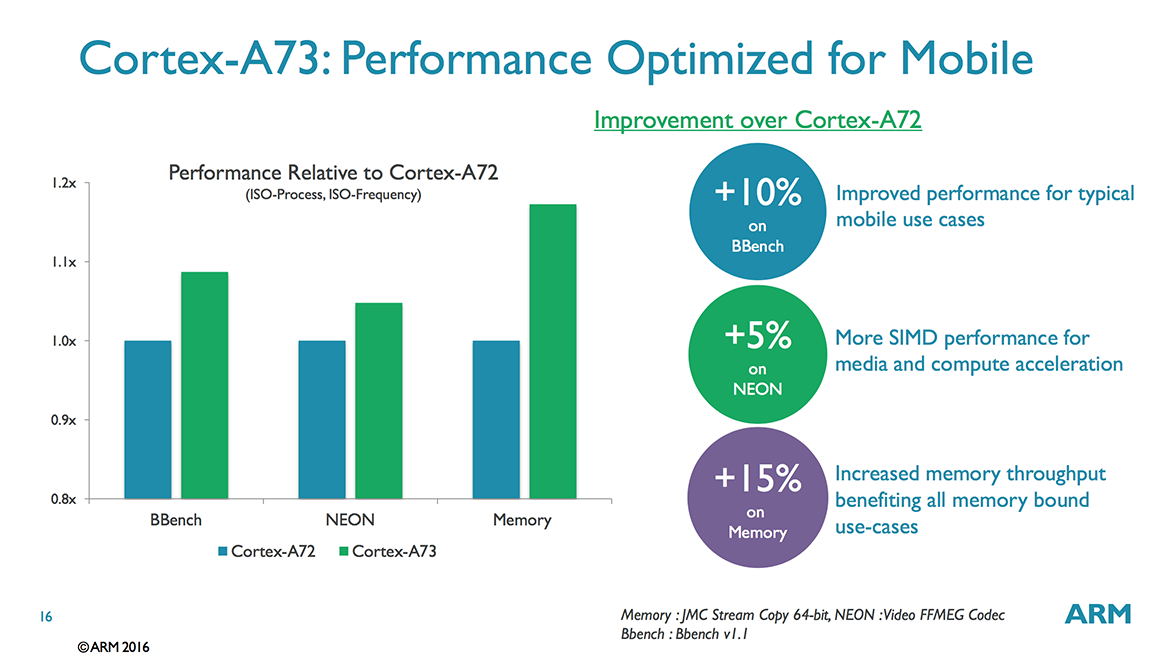 Indeed, ARM claims the A73 is 10% faster than the A72 in the BBench workload when running at the same frequency on the same process, with an even larger 15% improvement to memory performance based on JMC Steam Copy. Reducing power consumption was a higher priority than improving performance, however. The A73 consumes 20%-30% less power than the A72 (same process, same frequency), according to ARM’s figures.

Now that we have a better idea of what to expect, let’s see how the Mate 9 and its Kirin 960 SoC perform using some realistic workloads. We’ve been using PCMark for awhile now as a tool to evaluate overall system performance. It makes heavy use of Android API calls to run several different real-world workloads that test the combined effects of the CPU, GPU, RAM, and NAND storage. Unlike synthetic micro-benchmarks that run the CPU(s) only at peak frequency, PCMark elicits more realistic behavior from the CPU governor, making it a better indicator of everyday performance.

We’re now using the updated PCMark Work 2.0 suite, which includes a couple significant changes. First, the old Video Playback test has been replaced by an all new Video Editing test that uses OpenGL ES 2.0 fragment shaders to apply real-time effects to a video stream. It also tests video encoding, decoding, and muxing performance using the Android MediaCodec API. There’s also a new Data Manipulation test that measures how long it takes to parse chunks of data from several different file types and then records the frame rate while interacting with dynamic charts. 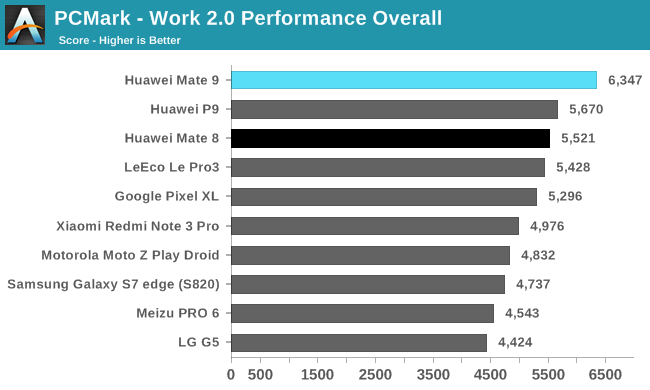 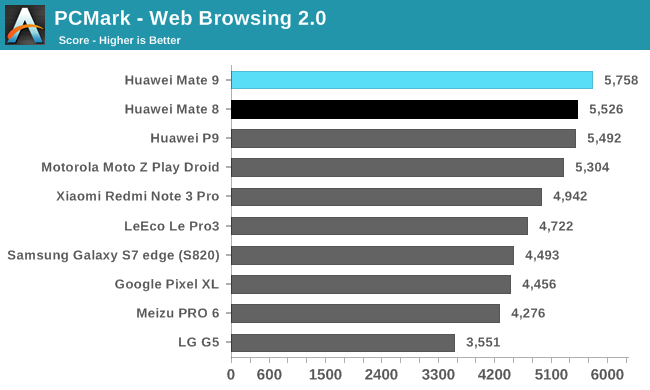 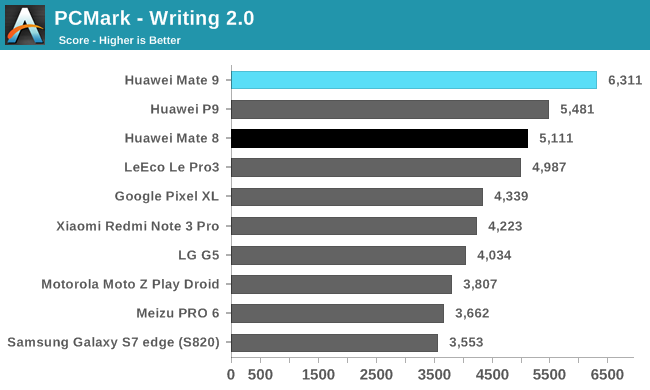 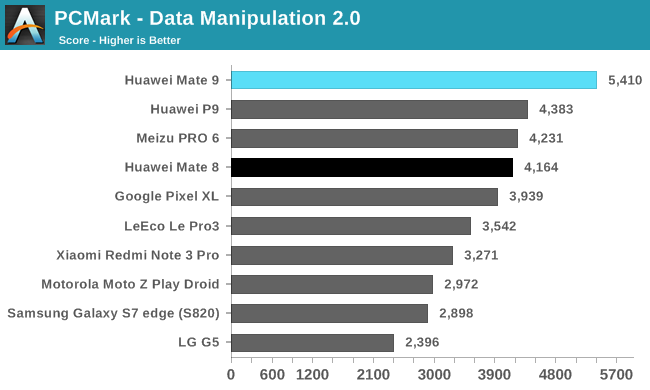 Huawei’s recent phones deliver good in-app performance, so it’s no surprise to see them lead the pack in PCMark. The Mate 9 improves upon the Mate 8’s overall score by 15% and finishes ahead of Google’s Pixel XL by 20%.

In the Web Browsing test, the Mate 9’s advantage over the Mate 8 shrinks to an imperceptible 4%, but it’s still faster than anything else we’ve tested to date. Qualcomm’s custom Kryo CPU, found inside Snapdragon 820/821, struggles with this particular workload, falling behind SoCs using ARM’s A72 and A73 CPUs. The highest performing Snapdragon 821 phone, LeEco’s Le Pro3, is 18% slower than the Mate 9.

The Writing test generates more frequent bursts of activity, exercising the higher-performing CPU cores with PDF processing and file encryption tasks. It also performs some memory operations and even reads and writes some files to internal NAND. The Mate 9 handles this workload well, showing a 23% performance improvement over the Mate 8. It does even better in the new Data Manipulation test, extending its lead over the Mate 8 to 30%. 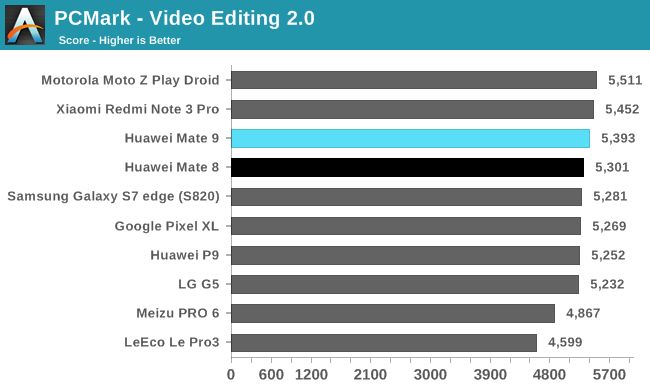 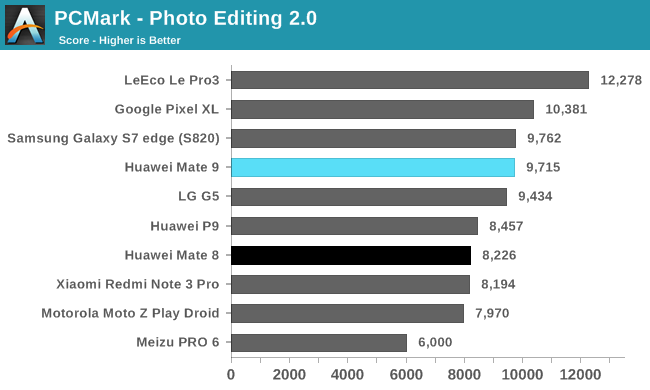 The Photo Editing test applies a number of different photo effects and filters using both the CPU and GPU. Phones using Qualcomm’s Snapdragon 820/821 SoC take the lead here, gaining an advantage from the Adreno 530 GPU’s strong ALU performance. The Mate 9 is 18% faster than the Mate 8, which is less than expected considering its GPU has a newer architecture and extra cores. 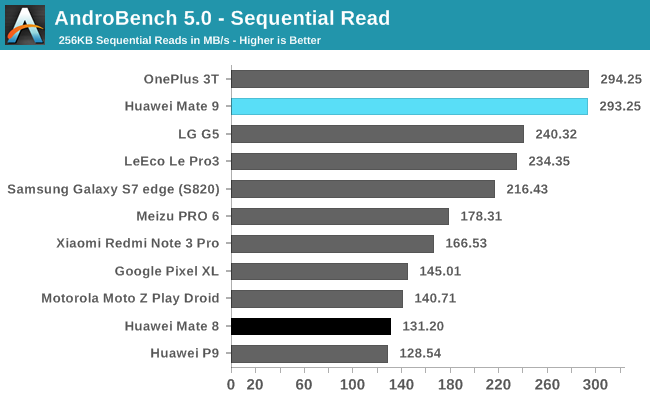 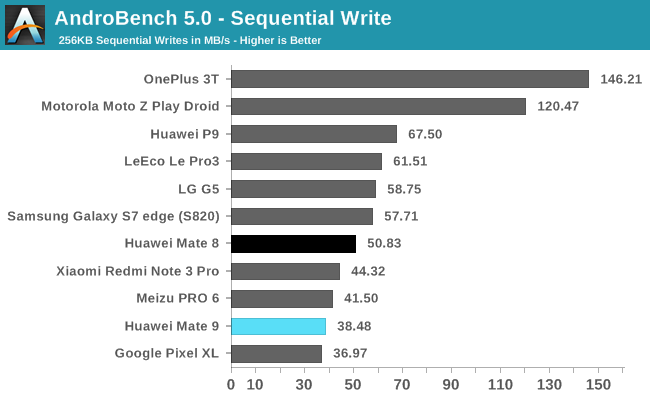 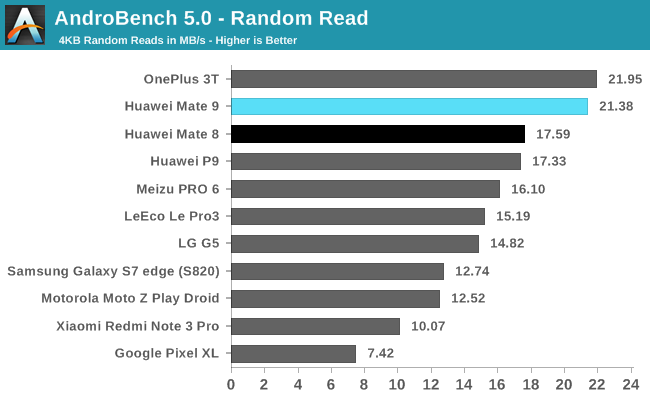 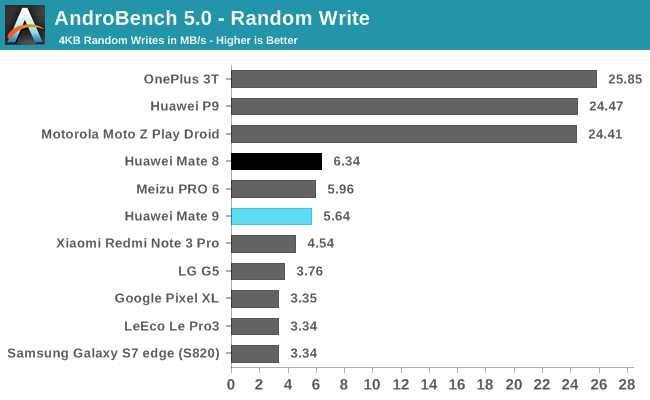 When we think about storage performance, we usually focus on the hardware—NAND, storage controller, interface—but software and the underlying filesystem also play important roles too. The EXT4 file system is the defacto standard for Linux and Android; however, the newer F2FS (Flash-Friendly File System) was designed with modern flash storage in mind and offers better performance than EXT4. The Mate 8 uses EXT4, but Huawei’s Mate 9 and P9 both use F2FS for the /data partition, as does the OnePlus 3T and Moto Z Play Droid.

It’s not too surprising then to see the OnePlus 3T perform so well in our storage tests, landing at the top of every chart. The results for the Mate 9 and P9 are not as consistent, however. For sequential reads, which occur when opening apps and loading photos, the Mate 9 matches the OnePlus 3T’s excellent performance and delivers more than twice the throughput of the Mate 8 and P9, which both use eMMC NAND. It’s surprising to see the P9 fall so far behind here. Apparently, using F2FS is not the sole reason for the Mate 9’s performance boost. The Mate 9’s sequential write performance is not nearly as good, however, but this has less impact on everyday performance.

When browsing the Web or using social media apps, file system access tends to be more random, with many small I/O transactions. Under these conditions, the Mate 9 performs well when reading files, but its random write speed is not quite as impressive. The OnePlus 3T, P9, and Moto Z Play Droid all use the F2FS file system too, and all three phones perform well when writing to storage, either randomly or sequentially. The Mate 9, for some reason, does not share this advantage, although it does not impact the perceived performance when actually using the phone; file reads are more noticeable to the user, and slower file writes are at least partially masked by buffering, which this test bypasses and does not account for. 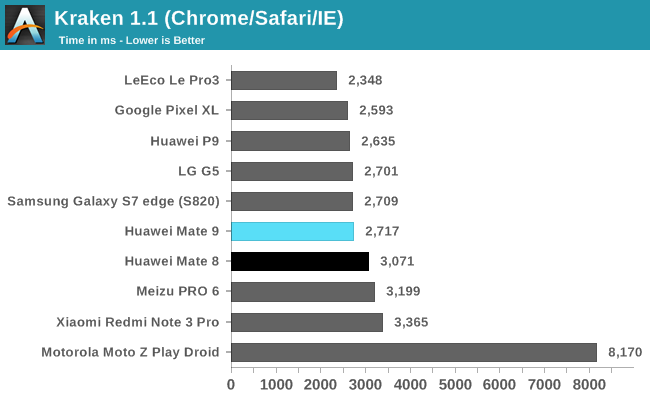 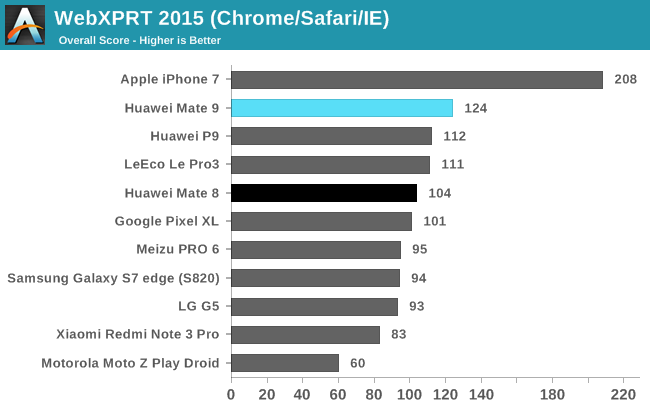 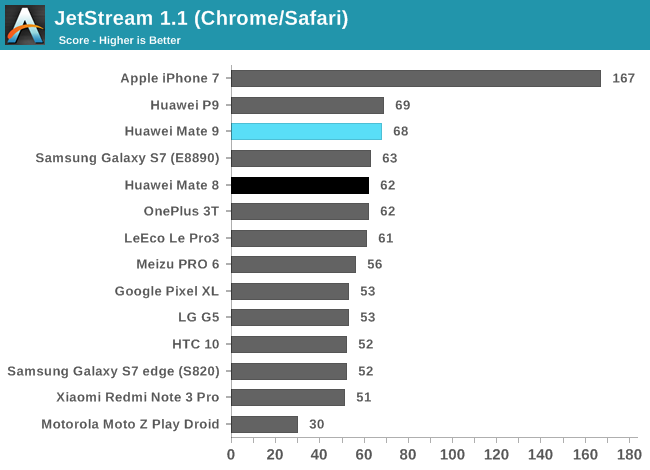 The phones using Snapdragon 820/821 all cluster at the top of the chart in the Kraken JavaScript test, with the LeEco Pro 3, whose Snapdragon 821 SoC runs its Kryo CPU cores at higher frequencies, pulling in front. The Kirin 960 (Mate 9) and Kirin 955 (P9) show similar performance in both Kraken and JetStream, with the higher frequency A72s in the latter helping to offset the A73’s architectural changes, while Kirin 960 performs about 11% better than Kirin 950 (Mate 8) and its A72 cores in the same tests. 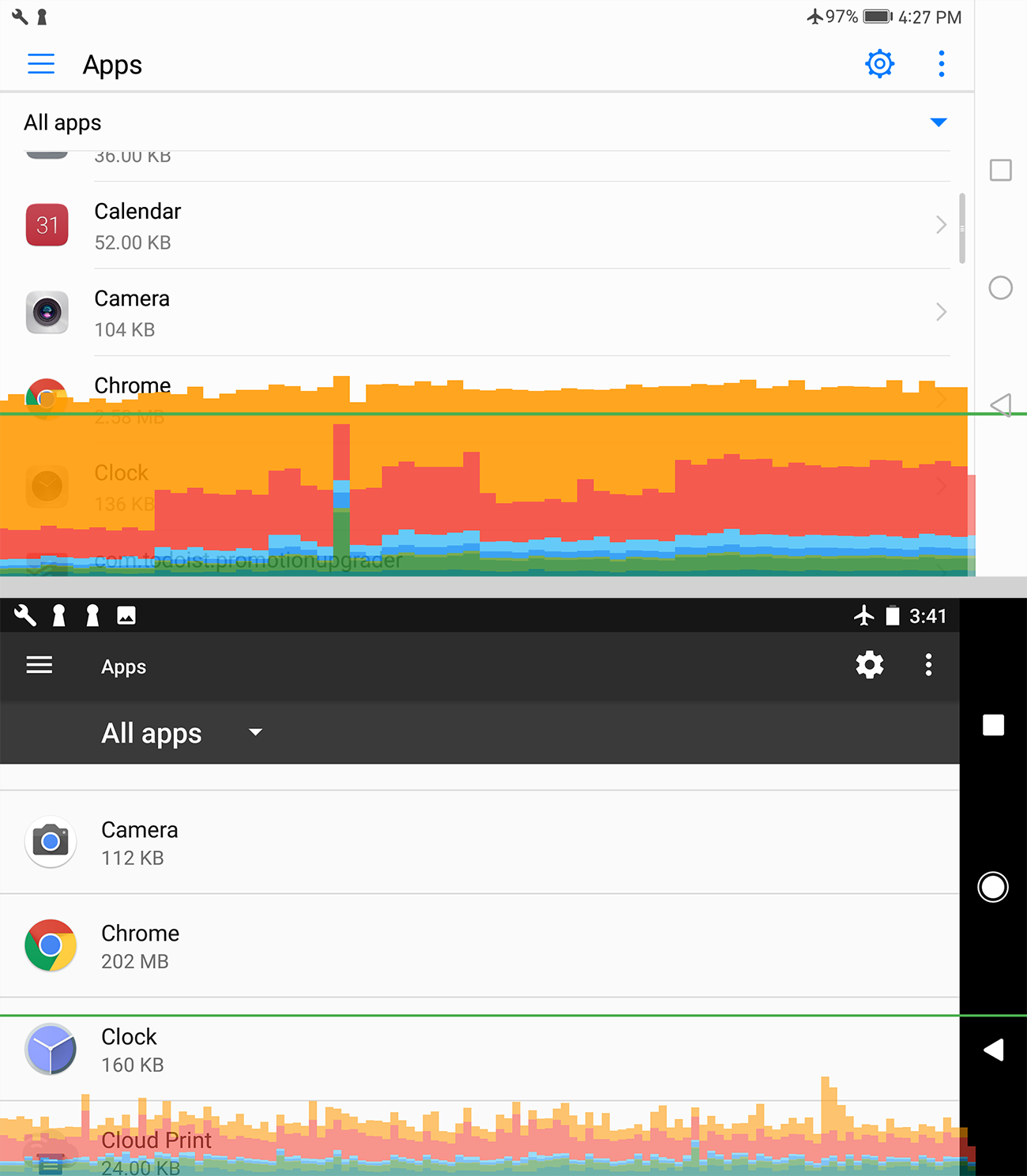 There’s one aspect of the Mate 9’s performance that’s less than perfect: UI fluidity. Its interface is very responsive and flicking between home screens, pulling down the notification shade, and system animations appear smooth; however, when scrolling through content in a browser or the Settings menu, for example, text and images do not slide across the screen as buttery smooth as they do on the Pixel XL. Granted, I’m being nitpicky. The effect is not obvious, more like on the edge of perception, and it only becomes really noticeable when viewing it side by side with the Pixel XL.

In the image above, you can see how the Mate 9 is unable to render frames quickly enough to meet the 60fps target (green line) when scrolling in the Settings menu. The Pixel XL, however, is capable of rendering frames much faster than 60fps, which makes scrolling appear smoother. OpenGL draw calls and the final buffer swap stage (the red and orange bars, respectively) suffer unusually long delays on the Mate 9. The Honor 8, which has a lower-performing GPU and runs EMUI 4.1, does not exhibit this behavior. I discussed this issue with ARM thinking it might be related to the GPU driver, but it said it has not encountered this issue during any of its testing. This could also be caused by something in EMUI 5.0, and Huawei is currently investigating this issue. Hopefully, it will be fixed in a future software update.

While not perfect, the Mate 9 is still the fastest Android phone I’ve used. Opening and installing apps, switching between apps, using apps side by side, running an email search—all of these common tasks are lightning quick. The amazingly fast fingerprint sensor also adds to the overall sense of speed, as does its ability to quickly connect to Wi-Fi networks.