The front of the Latitude D800 is bare, including only a screen release mechanism (a nice push button design that is much more user friendly than the slide style release mechanisms we are used to) and speaker ports. There are left and right speakers on the system and each is mounted about 3" from the center of the system. The front is mostly flat but angled slightly down. This prevents ones wrists from blocking the speaker output but at the same time channels the sound to the surface which the notebook lies.

The first division on the left side of the Latitude D800 is the hard drive bay. Removing the screw below the hard drive allows the bay to be removed along with the hard drive. Located in a cutout on this bay are two audio ports, on for headphones out and one for microphone in. To the left of the audio jacks is the unit's PCMCIA card slot. Despite its height, which is 0.5" inches bigger than the dual PCMCIA IBM laptops we examine later in this review, the Latitude D800 is outfitted with only one type-II PCMCIA slot. Below this slot is a card reader unlike any we have seen integrated into a notebook before: a smart card reader. Dell says that it integrated a smart card reader into the Latitude D800 as a result of direct customer feedback. Smart cards bring a new level of security to notebooks by incorporating"what you have" security into the preexisting "what you know" security systems. 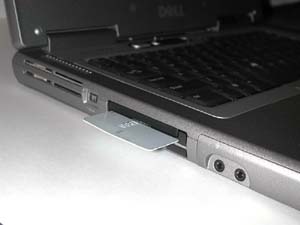 Below the PCMCIA/smart card stack is the system's IR window. To the left of the stack is the unit's single 4-pin IEEE-1394 unpowered firewire port. From our previous talks with Dell it was our understanding that they planed to move away from the mini-IEEE-1394 port and replace it with a full sized firewire port. Apparently plans have changed.

Finally on the left side is the unit's cooling vent. Cool air is drawn from before passing over the heatsink surface and exiting in the system's back.

The large holes on the back right of the system serve as hot air exhaust ports. Behind here lies the system's CPU heatsink. The next port is the power in port. Dell has finally strayed away from the keyed power plugs present on previous Latitude and Inspiron modes in favor of a circular plug which can be inserted in any direction. To the power port's left are a set of three recessed ports: a serial port, VGA-out port, and parallel port. the recessed nature of the ports prevent them from protruding out of the system's back. The back of the system is also home to a modem jack, ethernet jack, two USB 2.0 ports, and a S-video out port.

The funny looking port on the back right of the system is not a USB port (even though it looks like one) but actually a "D/Bay" connector which looks to be a USB 2.0 connection with a separate power connection. This port is used to power external modular devices produced by Dell such as an external DVD-ROM drive. The power rail is necessary to prevent power hungry external devices (like that DVD drive) from requiring a wall plug while operating. Also on the right side of the system is the Dell Latitude D800's optical drive. The system is available with a CD-ROM drive, DVD-ROM drive, or CD-RW/DVD combo drive. The modular bay can also accept a floppy disk drive, a second battery, or a second hard drive. The devices are hot swapable thanks to a release lever built into the drive bay mechanism.

The front of the right side of the system is also home to a lock port. The same style lock port is also located on the front left side of the system, meaning you no longer have to situate your computer's position with relation to where you can lock it up.

There are three access panels on the bottom of the Latitude D800. The large panel in the middle is home to the system's two SODIMM expansion slots. In our test system, which was configured with 512MB of memory, both slots were populated with 256MB of memory each. This means that expanding the total amount of system available will require the removal of at least one 256MB stick. The smaller access panel on the right is home to the mini-PCI slot and internal modem.

Only two screws hold the CPU fan in place which is user removable. The ease with which the fan can be removed shows that Dell really paid attention to detail when producing the Latitude D800. The CPU fan in notebook computers is often one of the first items to break and/or become noisy. By implementing a user accessible CPU fan, Dell now only has to send out a replacement fan in the mail when one fails as opposed to having to take the whole unit back for replacement.

The long slot along the back of the unit is the docking station connection. Dell is excited about the new docking solutions available for the Latitude D800 notebook, including solutions that offer DVI out connections and a monitor stand that allows the unit to serve as a display with an external keyboard and mouse.

The battery on the Dell unit is fairly standard but does include a push button that indicates battery charge state via a set of 5 LEDs. Each LED indicates 20% of battery charge. No longer does one have to power on a system to find out the battery state: a nice feature which has been carried over from the Inspiron C840 series notebooks. 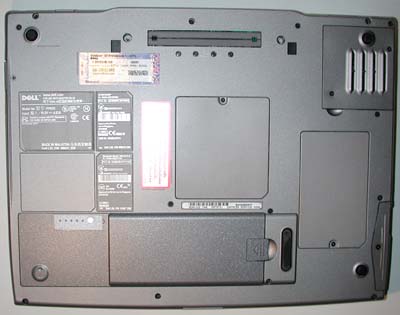 While we are on the topic of batteries, let us quickly mention the new Dell AC power adapter. Dell has revamped the power brick that the Inspiron series notebooks ship with. The brick is designed to aid in cable management by providing channels for wires to wrap around and a rubber strap to hold the cables in place. This may seem like a trivial change but we think that it has a great deal to offer. We are tired of dealing with tangled and twisted cords and the solution that the Latitude D800 brings to the table is very refreshing.

The Latitude D800 is certainly a powerful and full featured notebook, not to mention the first wide screen PC notebook we have seen to date, but how did Dell do when it came to size? Well, not as well as we would have hoped. The Latitude D800 is big: it measures 14.2" x 10.9" x 1.5", keeping it out of the thin and light category of notebooks. The system also packs quite a weight to it, at 7 pounds. The system is noticeably thinner than the previous Latitude C840 but not as small as we were hoping from a Pentium M solution. One of the major advantages of the Pentium M is its ability to feel at home in a thin and light system; an advantage that Dell did not leverage in the case of the Latitude D800. 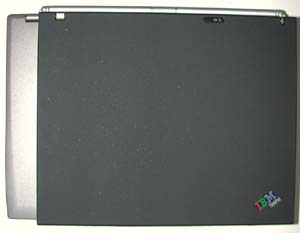 The D800 in comparision with the IBM T40 and FIC Centrino laptops.