IBM also took advantage of Centrino technology and the Pentium M processor to develop a new line of notebook computers. The result of this reworking is the ThinkPad T40 series notebooks, a replacement to the award winning T30 notebooks. Undoubtedly thin and light notebooks, we had the opportunity to look at both the IBM T40 72U and the T40p G1U, with the T40 72U being a Centrino solution (remember, that involves using Intel's Pentium M processor, 855PM chipset, and an Intel PRO/Wireless Network Connection 802.11b network card) and the T40p G1U serving as a top of the line Pentium M solution.

There are really the same with only a few minor cosmetic differences between the T40 and the T40p. As you can see above, both systems are the same size, feature the same size screen, same keyboard, same buttons, etc. Styling remains undoubtedly IBM, featuring a plentiful amount of black plastic that has been a mainstay of IBM notebooks since at least the DX2 mobile computing days.

Both the T40 and T40p are outfitted with a 14.1" TFT LCD display. The panel on the higher end T40p is an SXGA+ display, putting its maximum resolution at 1400x1050, while the T40 comes with an XGA display that runs at 1024x768. The viewing angle of both displays was very good and remained clear even when at an acute angle. The extra resolution offered by the T40p did not go unappreciated. The screen looks simply wonderful at 1400x1050 and seems to be a perfect match for the 14.1" size display. There is no UXGA (1600x1200) option of the T40 models as of yet but such a high resolution panel is not necessary on a screen of this size: text would most likely be rendered unreadable.

The keyboard on the T40 series notebooks is full sized and even comes with some extras like page forward and page back keys. Page up, page down, home, end and insert and delete keys are found in the upper right side of the keyboard while the arrow keys are placed in the standard lower right portion of the unit. The function key on the T40 keyboard is the last key on the bottom left of the keyboard in a position that is typically home to the control key. As a result the control key is shifted slightly to the right. There are a number of other keyboard on the market that are configured this way and, as we have noted a number of times in the past, we are not too fond of the function key's location: we often found ourselves hitting <function><c> or <function><v> as opposed to <control><c> or <control><v>.

Notably absent from the T40 keyboard (and all IBM keyboards presently) is a Windows key. The lack of a Windows key will not bother some users. Others out there who have become accustomed to <Windows><r> or <Windows><e> key combinations will find themselves reverting back to mouse commands. We cannot be sure why IBM leaves a Windows key off their keyboard (it seems there is plenty of room for one if the <Alt> key is shrunk some) but it may have something to do with the fact that IBM and Microsoft are competitors on the software side of things with Lotus SmartSuite and OS/2 Warp.

The tactile feedback of the T40 keyboard is astonishing. Key travel is generous and the keys large. The keyboard felt most desktop like of all in the bunch. 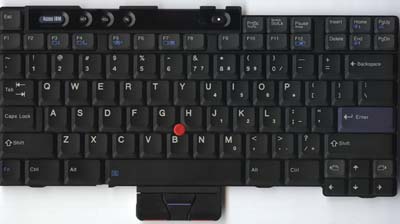 Have problems seeing your keyboard at night or while on a dark airplane? No problem says IBM. The T40 notebooks come outfitted with a small LED located on the top middle of the LCD panel housing. Hitting <function><page up> turns on the white LED which conveniently shines down directly on the keyboard below it. Below you can see the difference that the LED made in a low light situation. A nice feature to have and a sign that IBM put a lot of thinking into the T40's design.

Mouse input is provided via IBM's "ThinkPad UltraNav multi-pointing system" which includes a TrackPoint and touch pad. Each pointing device has its own set of buttons which, like the keyboard, offer great tactile response. On the TrackPoint side of things there is a "Internet Scroll Bar" located between the left and right mouse buttons. Clicking and holding this button while moving the TrackPoint or touch pad up and down scrolls around the current page. We must say that the keyboard and pointing solution on the system was wonderful, giving the T40 series the best input system we have seen to date on a notebook computer. 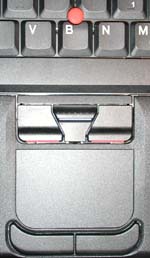 There are also status LEDs on the back of the monitor to show computer state while the screen is closed. On the T40 there are two icons, one indicating sleep state and one indicating battery status (orange while charging, blinking green while almost fully charged, and solid green while charged). Again the T40p does one better than the T40 by also including a Bluetooth status LED here.

There are five buttons located above the keyboard on the T40. The far right button, the one with a white dot in it, is the power button. To the left we have a mute button, a volume up and a volume down button. Finally there is an "Access IBM button" which launches a "Access IBM" application when pressed. As the software section of this review will tell you, the Access IBM application provides one touch access to computer settings and support options.