To examine the degree of improvement in battery life that the OnePlus 3T brings to the table I've run our standard set of battery benchmarks, which includes our web browsing battery test, and PCMark battery. 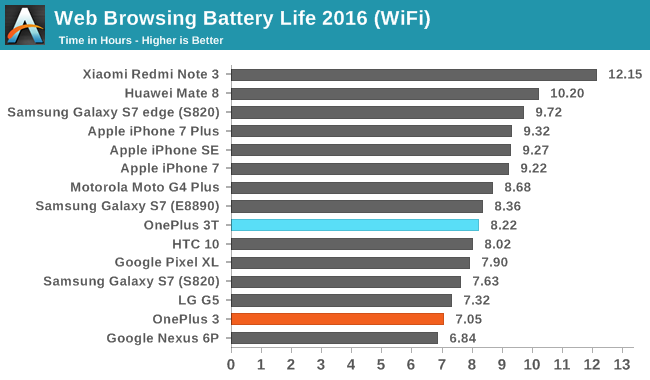 In our web browsing battery test the OnePlus 3T lasts 16% longer than the OnePlus 3, which is slightly longer than you'd get by simply scaling to match the 13% increase in battery capacity. Of course, there's always a degree of variance, along with differences in power usage for different SoCs and different bins of the same SoC, and these factors play a role in the outcome of the test. In any case, the increase in battery capacity comes without an increase in mass or size, so it's really just an extra hour or so of web browsing without compromising any other parts of the phone.

PCMark's battery life test runs through the same mix of tasks that emulate what users actually do with a device, so it provides a good idea of how much active usage a user can expect from a device. In this test the OnePlus 3T lasts 10% longer than the OnePlus 3, which is in line with the expected improvement from the increased battery capacity when you factor in slight differences in device platform power and test variance. This increase brings the OnePlus 3T slightly ahead of Samsung's Galaxy S7 Edge, which is a good improvement when one considers that the OnePlus 3 was beaten by the significantly smaller Exynos version of the Galaxy S7. 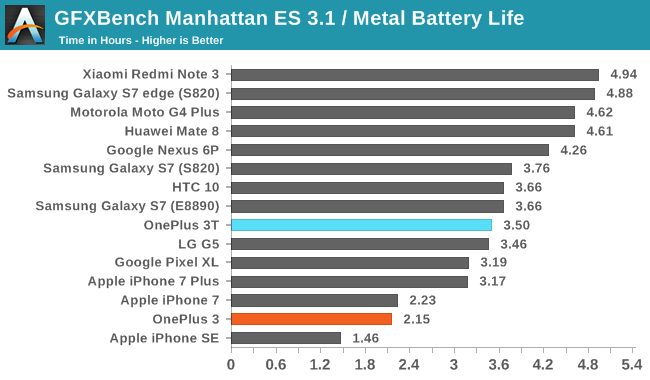 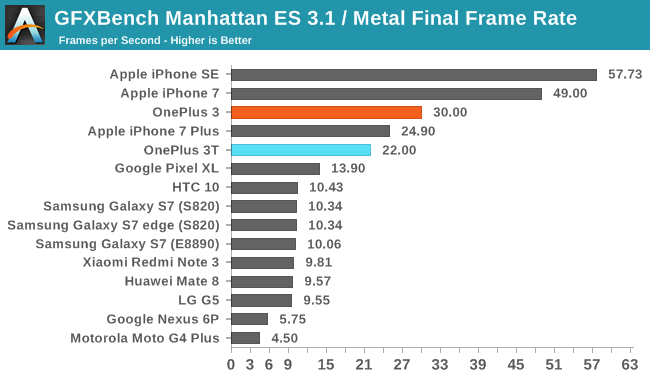 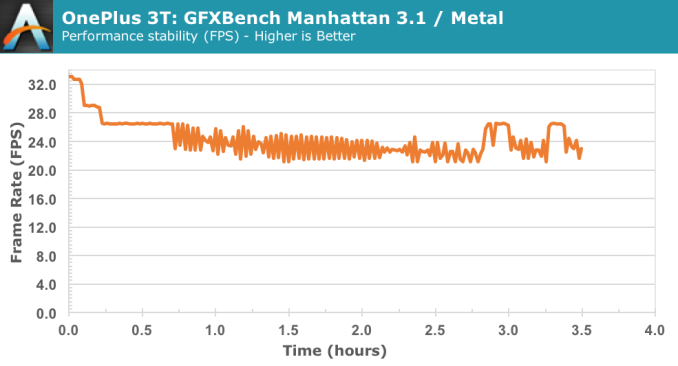 GFXBench demonstrates that the throttling behavior for the GPU has been changed either with the OnePlus 3T or in a newer version of OxygenOS than was available when I reviewed the OnePlus 3. I plan to re-run this test on the OnePlus 3 when OxygenOS 3.5.1 is made available for it to see if the behavior has changed. Essentially, the phone now exhibits more throttling during the test. The OnePlus 3 dropped down to a nearly constant 30fps in the Manhattan battery test, which meant if it were a real game you'd have a playable frame rate. The OnePlus 3T doesn't do as well. It drops from its peak of 33fps down to 26fps within the first twenty minutes, and slightly past forty minutes into the test it begins to oscillate rapidly between 22fps and 25-26fps.

Recently we have run into issues with charge time testing due to new restri ctions introduced in Android Nougat. To get around these I developed an app that we will use internally for measuring charge time. This app uses the same data set as our previous methodology, but accesses it using Android's system APIs rather than by polling the files on the disk directly. This means the results are directly comparable to ones obtained in the past, and the methodology should continue to work for the foreseeable future assuming the device's manufacturer hasn't broken the API, which unfortunately has been the case on some devices that we've tested internally.

The OnePlus 3T still ships with Android Marshmallow, so the old method of battery life testing could still be applied. However, I felt that this would be a good time to get the ball rolling with our new testing app, and I just wanted to make it clear to interested readers that we have a solution in place so we do not again encounter the issues with testing this that we did when reviewing the Pixel XL. 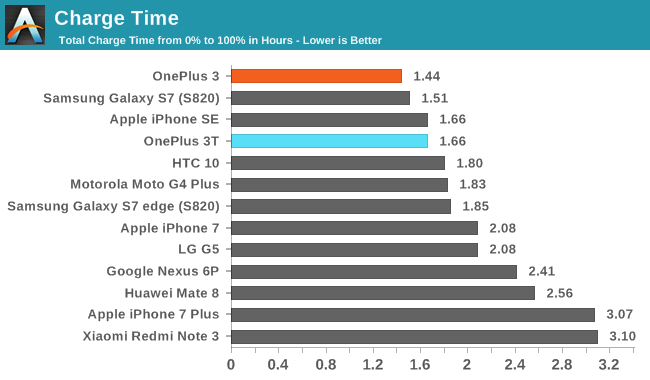 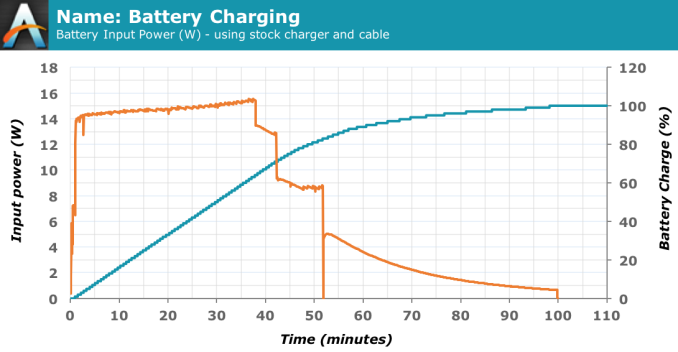 As expected, the OnePlus 3T takes longer to charge than the OnePlus 3, with the increase being strongly correlated to the amount that the capacity of the battery has increased. Dash Charge is still incredibly quick though, so I don't think users will have any complaints about the phone taking too long to charge. The only downside is that Dash Charge being exclusive to OnePlus means that you can only charge quickly using OnePlus's special charger and cable. I think most users end up using the block provided with their phone, but it does mean that you won't get fast charging speeds when borrowing someone else's charger, and if you end up having to buy another you can't buy a charger that supports USB Power Delivery or Qualcomm Quick Charge and utilize fast charging.