As ASUS’ newest high-end desktop motherboard model, the X99-E-10G WS comes out with almost all guns blazing. It is hard to escape how much functionality is present, from a full complement of PCIe lanes (x16/x16/x16/x16) to dual 10G copper Ethernet ports to a full set of DRAM (and support for ECC Registered for Xeons) as well as PCIe storage for either M.2 or U.2 and USB 3.1 ports. Pretty much everything you need, except perhaps Thunderbolt 3, is here. 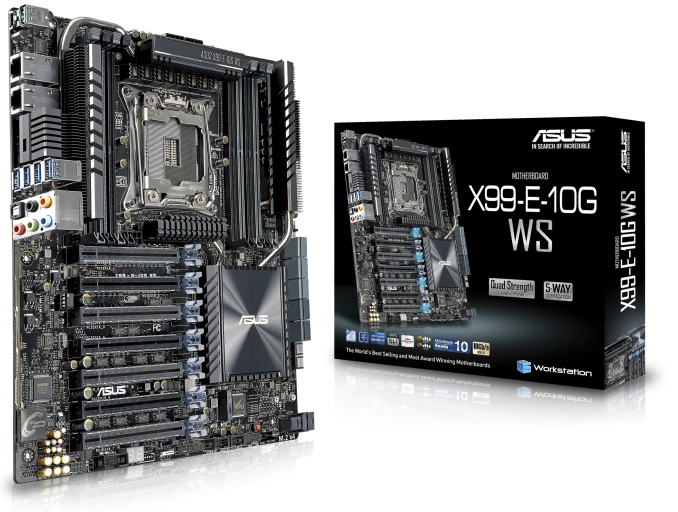 Ultimately this also pigeon holes the X99-E-10G WS into a highly specific market. Providing all this functionality isn’t cheap with the motherboard having to use two expensive Avago PCIe switches (PLX8747) and Intel’s newest PCIe 3.0 x4 X550-AT2 controller. This squares the motherboard down to users who needed 10G ports but were already lacking PCIe space. The numbers of users who qualify in that margin are set to be very low. Here’s an example of a use case: three GTX 980s with another 10G card (X540, PCIe 2.0 x8) attached in the bottom slot. 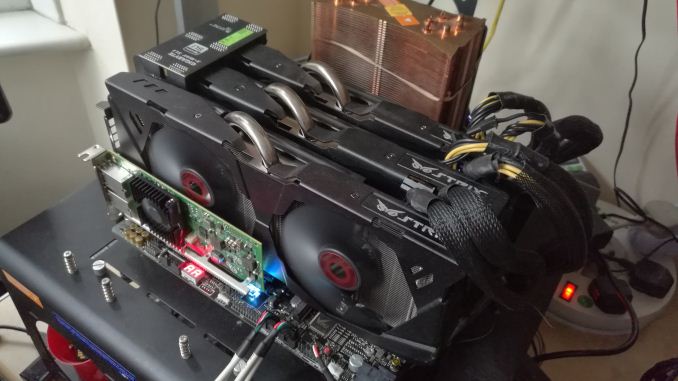 For performance, ASUS implements Multi-Core Turbo with the Core i7-5960X which gives our CPU benchmark results in the top half, but due to the PLX chip incurring a ~1% performance penalty, our gaming tests are the lowest we’ve seen for this set of tests on X99. For system benchmarks, the use of extra controllers does add to the POST time, but the audio performance is very good as well as USB 3.0/3.1 (with Turbo) and DPC Latency (one of ASUS’ recent strong points).

The BIOS and software side of the equation is ASUS’ usual consumer fare, and despite the X99-E-10G WS being a workstation focused board, aside from ECC Registered DRAM support with Xeons, there is nothing (nothing on the software side at least) that is specifically derived for workstations or prosumers that isn’t already on consumer platforms. That being said, fan controls, power and USB features are still relevant for most users.

The ASUS X99-E-10G WS does one thing really well – it offers the best single-socket option for integrated 10G support in the current market, and we will hopefully see more down the line (or at lower price points). As mentioned in our 10GBase-T motherboard overview earlier in the year, aside from the ASUS and ASRock boards available, and MSI’s C236 board with a single 10G port, options for integrated solutions are few and far between. Aside from switch pricing the ecosystem for home use, even as a prosumer play, needs to be driven by either switch availability (something like ASUS’ XG-U2008 at $250) or motherboard/PC adoption. So even at $600, the ASUS X99-E-10G WS shows how easy it can be to integrate 10G copper in the form of 10GBase-T.

Other Intel X99 Motherboard Reviews by AnandTech:
Prices Correct at time of each review