When a phone comes in two sizes, battery life is always one of the big questions on a potential buyer's mind. In general, if you have two devices with a similar hardware platform but one is able to fit a significantly larger battery due to its larger size, it's going to achieve better battery life. Obviously this is not a strict rule, as we've seen with web browsing on the iPhone and iPhone Plus, where both models have a very similar battery life. Even so, as a general rule it's usually a safe assumption.

The Google Pixel is one of those devices that comes in two sizes. There's a 5" model and a 5.5" model, both with equal thickness, and both sharing the same internal specifications. They differ only by the size and resolution of their AMOLED displays, and accordingly, the larger Pixel XL has a 25 percent larger internal battery.

Unfortunately, we don't have the 5" Google Pixel on hand, so testing will have to rely solely on the Pixel XL. As I just mentioned, it is usually the case that when a smartphone ships in two sizes the larger model provides better battery life, which is something to consider when thinking about where the normal Pixel would sit relative to the larger model. As usual, our battery testing begins with our internal web browsing test, followed by PCMark's general use battery test, and ending with a GFXBench GPU battery rundown. 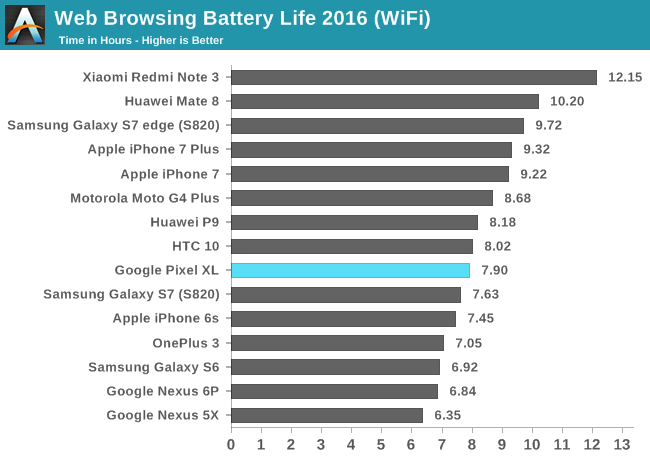 In our internal WiFi web browsing test the Google Pixel XL comes in just under 8 hours. Considering the thickness, mass, and battery capacity of the Pixel XL, this is not a very impressive result. In comparison, the thinner, smaller, and lighter Galaxy S7 edge with a display of equal size and resolution manages to last for 9.72 hours in this test. Apple's iPhone 7 and 7 Plus do similarly well at 9.22 hours and 9.32 hours, despite the fact that their batteries are significantly smaller than the Pixel XL's. The S7 edge and the Pixel XL have very similar specifications, right down to the CPU configuration and the display. The S7 edge only has a 4% advantage for battery capacity, which isn't nearly enough to explain the gap. It could very well come down to greater power usage by the display, and this appears even more likely when one considers the additional power burden of using the wider NTSC gamut instead of sRGB.

Normally we would also run this test on LTE, in order to compare battery life between devices when browsing on a cellular connection instead of WiFi. Unfortunately, the Pixel XL presents a problem here. Both Matt and I have noticed that cellular reception on the Pixel XL is not very good. In particular, Matt was unable to achieve our target signal strength of -90dBm or better in the same area where he tests all other LTE devices. The best signal he was able to achieve was -100dBm (outdoors). Because we're dealing with a logarithmic scale, the difference in transmission power is not 10% like you might imagine based on the numbers, it's ten times the power. Unfortunately, we aren't equipped to do laboratory tests on the Pixel XL to directly compare RF performance to other devices, but it does seem that the signal strength is generally not as good as other smartphones. 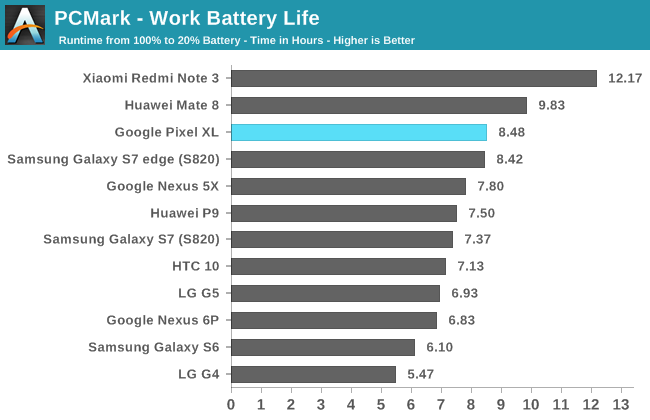 In PCMark's battery test, the Pixel XL is much more competitive than when it's browsing on WiFi. The result is actually slightly higher than the Galaxy S7 edge, which is a good position to be in. However, the reasoning behind this has more to do with the Pixel XL's poor performance in PCMark than any sort of advancements in energy efficiency. While running PCMark's workloads, the Pixel XL's CPU cores run at lower frequencies for longer stretches of time than the Galaxy S7 edge's CPU cores, which helps to explain the Pixel XL's lower performance and longer battery life. In the end, PCMark is a test of general usage, and so this shows that the Pixel XL can last for a good length of time on a single charge, but only by sustaining a relatively low level of performance during that time compared to other smartphones. 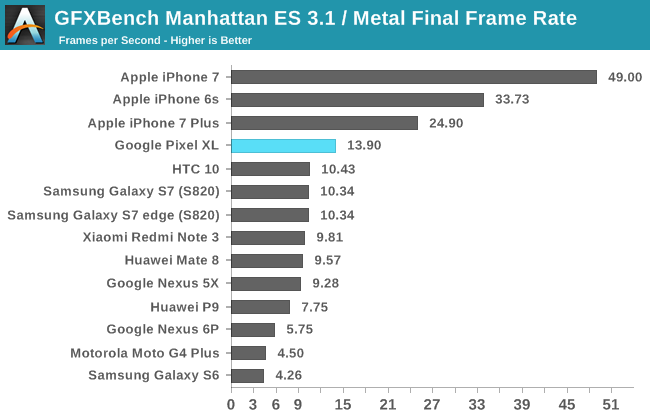 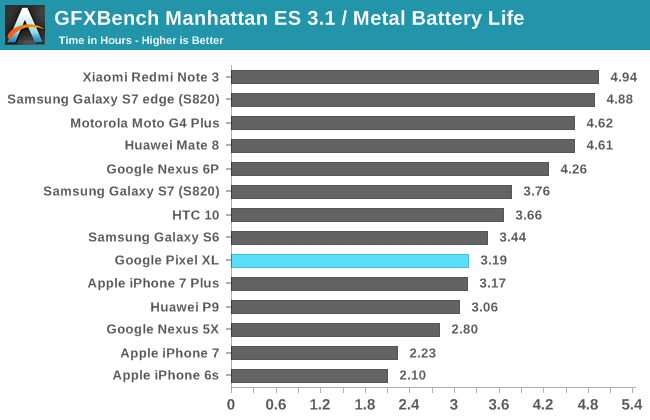 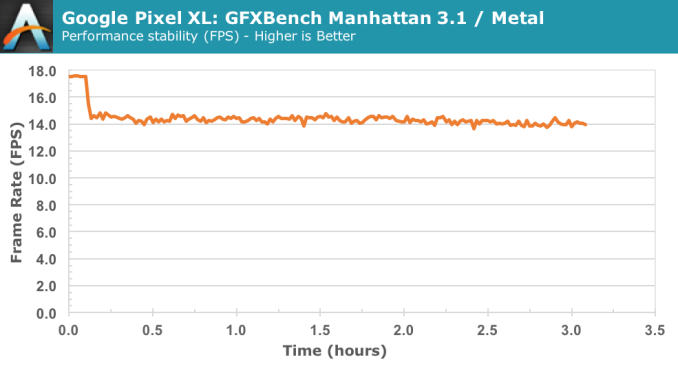 The Pixel XL does quite well in the GFXBench Manhattan battery test. The total runtime is 3.19 hours, which is lower than other Android devices, although in most cases the gap isn't enormous. The Galaxy S7 edge is an exception once again, coming in at 4.88 hours despite its small battery advantage not being enough to create such a gap.

GFXBench battery always has two sides though, and when you look at sustained performance it's clear that the Pixel XL has an advantage over existing Android devices. It's hard to say how much of this is due to improvements in Snapdragon 821 and how much could be due to differences in thermal design between different smartphones. When you consider the battery lifetime and the sustained performance, the Pixel XL definitely does a good job.

A Note About Charge Time Testing

Due to changes made to filesystem access in Android Nougat, we are unable to perform our standard charge time test on the Pixel XL. The test requires data related to current, voltage, and charge level that are no longer accessible, meaning that there's no way to produce a result that is comparable to existing data. We will be evaluating potential options going forward, and may decide to migrate to a test that measures power at the source rather than on the device.