When it was first announced at the beginning of this year, the SanDisk X400 was a good value. It raised the bar for planar TLC performance and carried a reasonable mid-range price. The X400 offered OEMs a TCG Opal-compliant self encrypting drive option and was the first single-sided 1TB M.2 SSD. 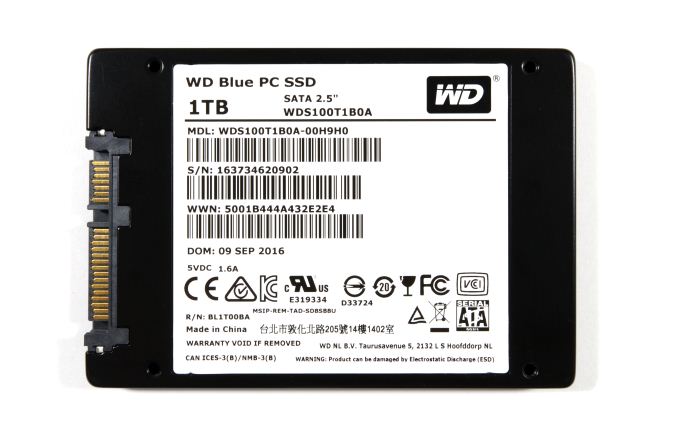 The WD Blue follows in the footsteps of the SanDisk X400 and doesn't break any new ground. The hardware is essentially identical, but the firmware has been re-tuned. The WD Blue trades some capacity for an increased write endurance rating that is above average for a mainstream SATA SSD. The extra overprovisioning allows for improved sustained random write performance, one of the few benchmarks where the X400 was not the fastest planar TLC drive. Unfortunately, the WD Blue is slower than the X400 on most other tests and is not able to secure a claim to being the fastest budget SSD, though it does offer decent well-rounded performance with no major shortcomings. In spite of the increased endurance rating, the WD Blue only comes with a three year warranty compared to the five year warranty offered on the X400.

The WD Blue does manage to push the limits of planar TLC power efficiency, but only incrementally. In comparison to the radical improvement offered by Micron's 3D TLC in the Crucial MX300, the WD Blue's progress is insignificant.

The most important difference between the WD Blue and the SanDisk X400 is the fact that the WD Blue is launching into a very different market. Planar TLC NAND is no longer the only option for budget SSDs as Micron's 3D TLC is now shipping in volume and is substantially cheaper than Samsung's 3D TLC in the 850 EVO. The Crucial MX300 based on Micron's 3D TLC is faster and substantially more power efficient than planar TLC SSDs including both the SanDisk X400 and the WD Blue.

However the market doesn't seem to have fully adjusted to this situation. The SanDisk X400 is currently more expensive than the Crucial MX300 while only offering a longer warranty period to justify the premium. More entry-level TLC drives like the OCZ Trion 150 are barely cheaper than the MX300. To compete against the Crucial MX300 and other 3D TLC drives that are coming to market, the WD Blue will have to be priced far below its starting MSRP, which seems to have been set in consideration of only the planar TLC competition. Micron's 3D TLC is driving down prices and if Western Digital can't make the WD Blue even cheaper, it will not be able to secure a place in the crowded SSD market.