There are a number of problems with today's BIOSes, for starters, there's no pre-boot support for drivers, formatting utilities, etc... If you want to flash your BIOS you're stuck with booting to a DOS boot disk, but once in the DOS shell there's very little you can do. You won't be able to find drivers for a wireless networking card in DOS, so you're basically stuck with pulling data off of a floppy or a CD, assuming you've installed the appropriate ATAPI drivers.

What this all boils down to is that today's Basic Input/Output Systems (BIOSes) are entirely too basic for the demands of users today. Imagine being able to flash your BIOS without having to copy your BIOS to a floppy or use a flaky Windows utility; imagine a BIOS with a driver model so you could get network access before ever having to boot into your OS, and imagine a BIOS where you've got a fully functional shell where you can perform basic operations on your drive (partitioning, formatting, etc...) without having to use DOS.

Solving the problems associated with today's antiquated BIOS architecture is a technology that's been around for a while known as the Extensible Firmware Interface (EFI).

Simply referred to as the thing "beyond BIOS," EFI promises to address all of the issues we brought up and more. The EFI specification calls for a driver model and has support for a shell. Not only would EFI enabled systems help rid us all of DOS boot disks, but it would also be the final nail in the floppy drive's coffin - with no need for DOS boot disks, the only purpose for the floppy these days ends up disappearing. 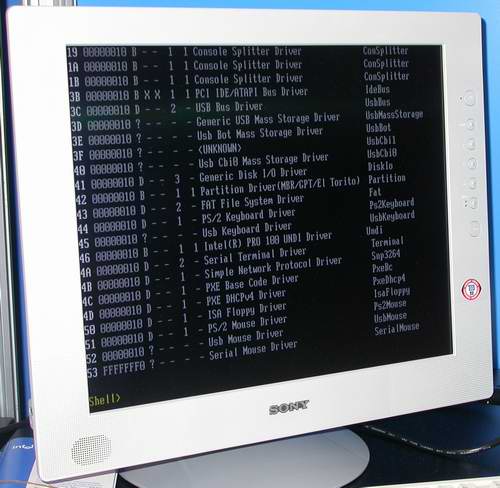 For those of you that are worried about a lot of drivers making firmware hubs entirely too large in size, you'll be able to have drivers on a USB flash disk in order to reduce the amount of drivers that have to be present in the actual firmware itself. 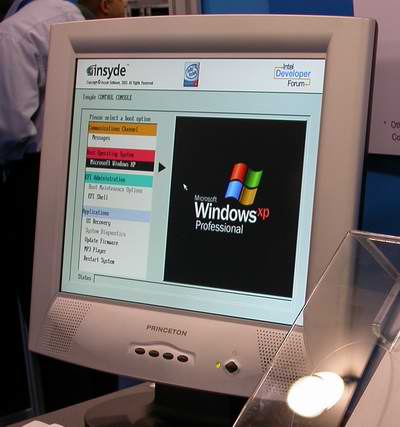 EFI technology has already been deployed in Itanium systems, but unfortunately we won't see it on the desktop for a while. What's necessary for EFI to be implemented in desktops is a desktop OS with support for the standard. Microsoft has yet to commit to releasing an OS with EFI support, although we can expect support in Longhorn.