For all but one of the processors, integrated graphics is the name of the game. AMD configures the integrated graphics in terms of Compute Units (CUs), with each CU having 64 streaming processors (SPs) using GCN 1.3 (aka GCN 3.0) architecture, the same architecture as found in AMD’s R9 Fury line of GPUs. The lowest processor in the stack, the A6-9500E, will have four CUs for 256 SPs, and the A12 APUs will have eight CUs, for 512 SPs. The other processors will have six CUs for 384 SPs, and in each circumstance the higher TDP processor typically has the higher base and turbo frequency.

The new top frequency, 1108 MHz, for the A12-9800 is an interesting element in the discussion. Compared to the previous A10-7890K, we have a +28% increase in raw GPU frequency with the same number of streaming processors, but a lower TDP. This means one of two things – either the 1108 MHz frequency mode is a rare turbo state as the TDP has to be shared between the CPU and APU, or the silicon is sufficient enough to maintain a 28% higher frequency with ease. Obviously, based on the overclocking results seen previously, it might be interesting to see how the GPU might change in frequency without a TDP barrier and with sufficient cooling. For comparison, when we tested the A10-7890K in Grand Theft Auto at a 1280x720 resolution and low-quality settings, we saw an average 55.20 FPS. 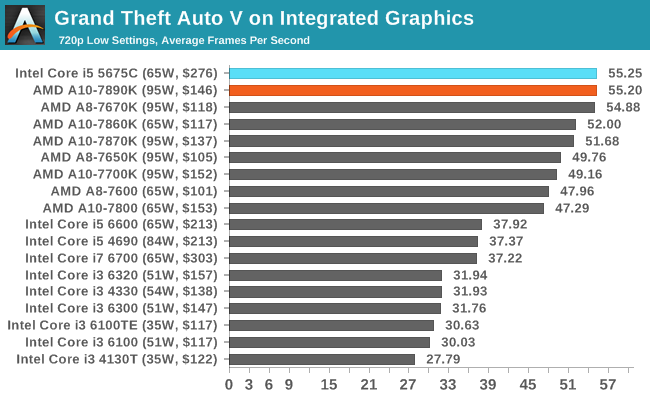 Bearing in mind the change in the cache configuration moving to Bristol Ridge, moving from a 4 MB L2 to a 2 MB L2 but increasing the DRAM compatibility from DDR3-2133 to DDR4-2400, that value should move positive, and distinctly the most cost effective part for gaming.

Each of these processors supports the following display modes:

Technically the processor will support three displays, with any mix of the above. Analog video via VGA can be supported by a DP-to-VGA converter chip on the motherboard or via an external dongle.

For codec support, Bristol Ridge can do the following (natively unless specified):

AMD still continues to support HSA and the arrangement between the Excavator v2 modules in Bristol Ridge and the GCN graphics inside is no different – we still get Full 1.0 specification support. With the added performance, AMD is claiming equal scores for the A12-9800 on PCMark 8 Home with OpenCL acceleration as a Core i5-6500 ($192 tray price), and the A12-9800E is listed as a 17% increase in performance over the i5-6500T. With synthetic gaming benchmarks, AMD is claiming 90-100% better performance for the A12 over the i5 competition.