Up until recently, the de-facto wide gamut mode for displays was Adobe RGB. This makes sense when you consider that many cameras either let you capture in sRGB or Adobe RGB, and Adobe RGB actually covers the color space of a CMYK printer quite well, which makes it a good fit for editing photos for print. Keeping with that tradition, the Lenovo X1 Yoga OLED has a photo color mode which uses the Adobe RGB gamut, a 2.2 gamma, and a white target of D65.

Greyscale accuracy in the Adobe RGB mode is not as good as the sRGB mode. The gamma does look straighter, but since this is a 21 point test I can't say that for certain. what is clear is that it's not as far off of the desired 2.2 target as the standard mode, which is a good sign. However, the greyscale presents a problem, with shades being shifted toward red even more strongly than in the sRGB mode, causing generally higher levels of error. Again, these results definitely do not match the advertised 2.2 gamma and white point of D65, and even though the error isn't incredibly severe, it's disappointing from the perspective of not getting what was advertised to you. The error is also high enough to pose a problem with color-critical work. 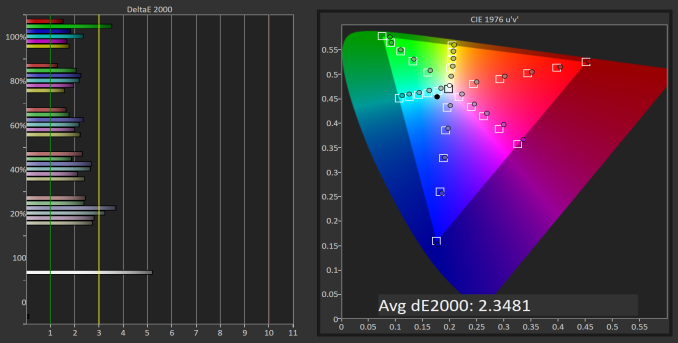 At first glance, it looks like the X1 Yoga OLED is actually more accurate in Adobe RGB mode than sRGB. While this is possible, I want to stress the fact that a 20% saturation sweep is not comparable to a 4 bit step sweep which tests 64 points. It could be that the Adobe RGB mode is more accurate, or it could just be that errors between these measurements points caused by irregular gamma are being missed. In any case, it does appear that the general accuray in the Adobe RGB mode is quite good, and there are only a few shades that have an error greater than three. Curiously, the green primary shows one of the largest errors, likely due to some issue with the color transform caused by the batch calibration profile not being a true characterization of this exact display. However, the overall accuracy is perfectly suitable for your average photographer or artist. 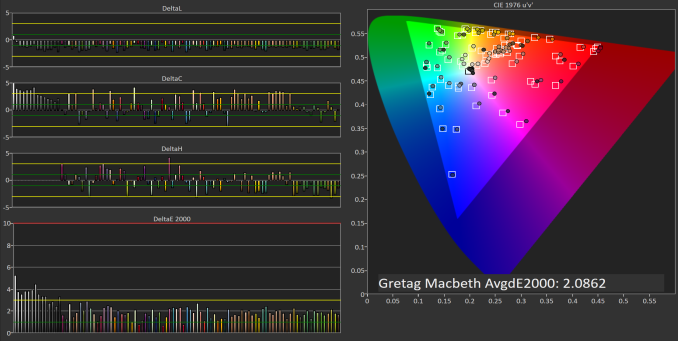 Accuracy in the GretagMacbeth ColorChecker test is actually better than in the sRGB mode. This result is comparable between the two tests because I used the same pattern set. The fact that it's significantly more accurate is just an artifact of the fact that the accuracy of your color transform is limited when you don't have a device profile that specifically characterizes the display, leading to different errors depending on which smaller gamut you constrain the display to. In any case, the biggest error contribution comes from the grey shades, and the accuracy of colors is quite good.

The X1 Yoga OLED's Adobe RGB calibration is alreaady quite good for color, but the greyscale accuracy could definitely use some work. While I was at it, I decided to try a display calibration with an Adobe RGB target to see how accurate I could get it.

After calibration the greyscale performance in the Adobe RGB mode is outstanding. There's no way to totally fix the errors at the brightest levels because there's limited room to adjust the RGB components, but the general accuracy is very high. The gamma is now straight, and there's a good RGB balance for each shade of grey up until 85% where it is still slightly red-shifted. 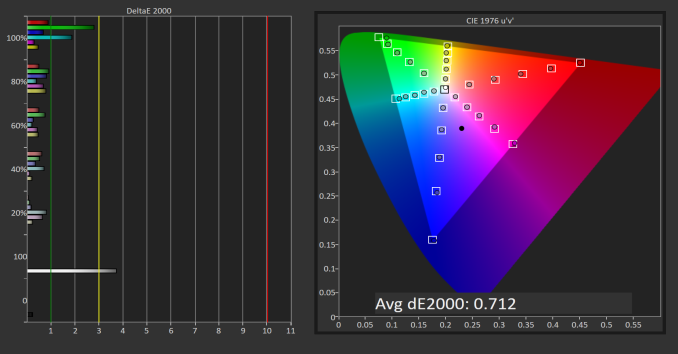 Saturation accuracy is also outstanding after calibration. The only issue is the green primary, which was an issue prior to calibration and isn't really something that can be fixed with a greyscale calibration. Apart from that, and a slightly higher than average error in 100% cyan, every other color has an error value below one, meaning you cannot distinguish it from the actual reference color.

With great greyscale and saturation accuracy comes great accuracy for color mixtures. Only a few shades in the Gretag-Macbeth ColorChecker test can even be distinguished from the reference color once the display has been calibrated. The only issue that stands out is white, which I already discussed in the greyscale section. After calibration, this is truly a display that can be used for professional-grade color-critical work.

For my final test I decided to try defining a custom color mode. This is honestly the most interesting feature on the X1 Yoga OLED, and I've never seen anything like it in another product. Some monitors let you choose a color gamut and a gamma target, but seldom allow for this level of control over the white point as well. Something that bothered me was the fact that the X1 Yoga OLED's movie mode uses the actual DCI-P3 standard, including the non-standard white point of D63 and a gamma of 2.6, neither of which are acceptable for a laptop's viewing conditions/ For this test I defined a target using the DCI-P3 gamut, but with a gamma of 2.2 and a white point of D65, which should maintain the rendition of greyscale shades that a user would be used to in sRGB.

Greyscale accuracy in my custom P3 mode has the highest error of the modes that I've tested. Again, Lenovo advertises that you have a power 2.2 gamma and a white point of D65, and it's not even close. The gamma would actually be decent if it weren't for the huge ramp at the start, but even in the areas where the gamma value is close to what it should be the severe imbalance between red and blue in the greyscale poses a big problem. The funny thing is, Lenovo's color modes should have absolutely no greyscale variance for a given gamma and white point, because greyscale rendering is independent of the color gamut chosen. This again suggests problems relating to the core device profile only being an approximation of the display's true output characteristics. 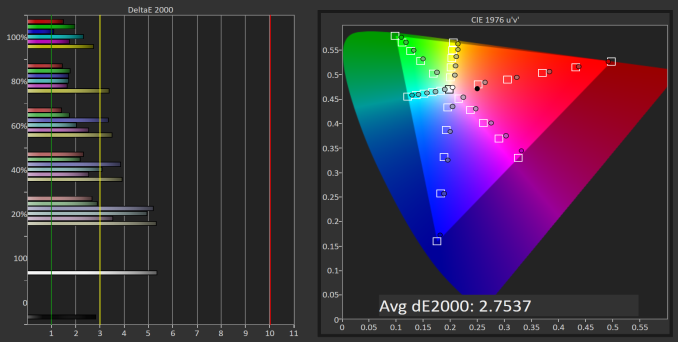 Saturation accuracy is good, although there are some significant errors with the lowest saturation levels tested. Yellow seems to have the highest degree of error overall, while red has the lowest. The result certainly isn't bad, but I just find myself wishing Lenovo had taken the extra step to factory calibrate each laptop individually, which would have enabled extremely high levels of accuracy in every color mode. The current accuracy isn't bad at all, but there's so much being left on the table on the hardware side, even though all the necessary software is in place.

Color accuracy in the Gretag-Macbeth ColorChecker test is not near as good as the Adobe RGB mode. The increased greyscale errors certainly play a part, but when looking at the specific color patterns the general trend is an error value around three, while in Adobe RGB mode it's close to two.

Unfortunately, I wasn't able to perform a calibration for the custom display mode that I set. I've never run into this before, but I suspect that something related to the custom nature of the display mode was causing changes that prevented calman from properly calibrating the greyscale. Without knowing how Lenovo's underlying implementation works I can't really say anything for certain, but the issue only cropped up when using a custom color mode, while the pre-defined standard and photo modes that correspond to sRGB and Adobe RGB worked perfectly well.

Lenovo's color modes on the X1 Yoga OLED are very ambitious, and it's possibly the best color system I've ever seen on a Windows device. While having system-wide color management is more optimal, Lenovo's software team has put a ton of effort into making software to ease the pains of lacking color management on Windows. Unfortunately, their hardware and product teams haven't gone to those same lengths by doing the per-unit calibration that is required to pull these features off. If you don't have a profile that perfectly characterizes the output of the display, you cannot hope to apply a transformation matrix to convert that display's output to another color space, especially aribitrary ones defined by the user. Lenovo's software team has put all the necessary building blocks in place to pull it off, and in the future the product team needs to follow through on their side by individually calibrating and profiling each display.