The dual Gigabit LAN feature of the GB-BSi7HAL-6500 is unique. We have already discussed the networking appliance use-case for the PC. Other aspects that differentiate various Skylake-U UCFF PCs include the PCIe peripherals and the OPI configuration. On the former front, GIGABYTE has chosen to connect a ASMedia ASM1142 bridge chip to the PCH via a PCIe 3.0 x2 link. The other side of the bridge chip is configured to provide one Type-A and one Type-C USB 3.1 Gen 2 port in the front panel. The ASM1142 chip also has a x1 uplink configuration that could limit the simultaneous bandwidth availability. Fortunately, the ASM1142 in the GB-BSi7HAL-6500 is configured to provide maximum possible performance. To evaluate this, we connected the Netac Z5 and the SanDisk Extreme 900 to the system at the same time. In the first pass, we ran the sequential read and writes (queue depth of 1) one after the other. In the second pass, we triggered the QD32 sequential tests on both units at the same time.

It appears that the bridge chip is able to support around 800 MBps of traffic. We will check out the effects of a PCIe x1 uplink to the Skylake-U PCH for the same bridge chip in one of the upcoming reviews.

In terms of scope for improvement, the BIOS could definitely do with some more options such as the ability to operate the USB 3.0 ports in USB 2.0 mode and some control over the DRAM timing parameters for power users. Instead of a power brick adapter, GIGABYTE could opt for the more compact wall wart (such as the one bundled with the Intel NUC6i5SYK). An extra USB 3.0 port adjoining the second LAN port on the side could turn out to be useful under certain usage scenarios. On the platform side, we find it hard to see a situation where the ASMedia USB 3.1 Gen 2 controller is a better option compared to the Intel Alpine Ridge controller. The GB-BSi7HT-6500 sells for $485 and comes with a Thunderbolt 3 / USB 3.1 Gen 2 Type-C port, a SDXC slot and HDMI 2.0. For more than $100 extra, the GB-BSi7HAL-6500 provides one additional USB 3.1 Gen 2 Type-A port and an extra RJ-45 port, but loses Thunderbolt 3 and the SDXC slot. Given the versatility of Thunderbolt 3, a GB-BSi7HTL-6500 at $500 would have been perfect.

Coming to the business end of the review, we can discuss two different angles - GIGABYTE's Skylake BRIX lineup in general and the GB-BSi7HAL-6500 in particular. On the former front, it can be safely said that GIGABYTE has analyzed the target market for UCFF PCs extensively. They have managed to create a single platform that only needs slight tweaks in order to cater to specific market segments. The wide variety of offerings range from Thunderbolt-capable UCFF PCs to units focused on industrial applications and targeting specific embedded market segments such as networking appliances. GIGABYTE's comprehensive Skylake BRIX offerings include more than 20 different SKUs that can cater to every market need and budget. All other vendors have restricted themselves to two or three SKUs for their Skylake-U products, differentiated only by the processor. 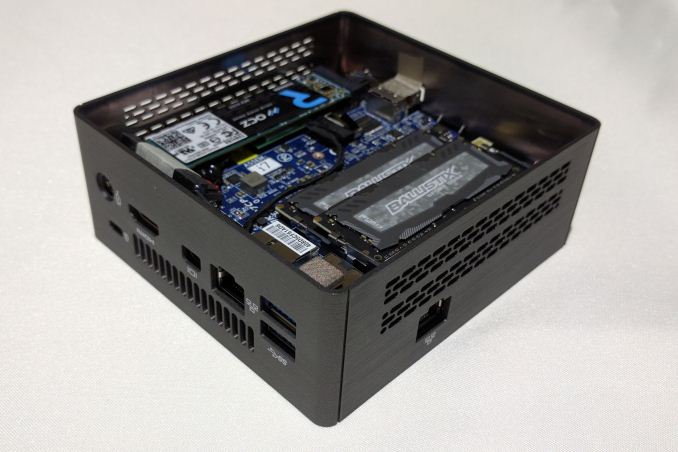 The GB-BSi7HAL-6500 is currently priced at $591 on Amazon. From the viewpoint of x86 networking appliances with comparable horsepower, the pricing seems par for the course. However, in terms of being a generic PC, it is difficult to recommend it against something like the Skull Canyon NUC (NUC6i7KYK) which costs less than $30 more, but handily scores better in the benchmarks while also being quite extensible (thanks to Thunderbolt 3 and the number of docks that are coming into the market). That said, the NUC6i7KYK, based on a 47W Skylake-H CPU, is not as compact or as power-efficient as the GB-BSi7HAL-6500.

All said, the GIGABYTE GB-BSi7HAL-6500 is a compact, yet powerful networking appliance platform. Thanks to its configuration and feature set, it also emerges as the best performer amongst all the Skylake-U platforms that we have evaluated so far.