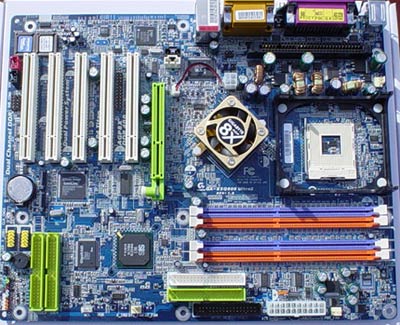 We will keep you updated on 800MHz FSB support as we continue to receive information throughout the month.

When Gigabyte introduced their E7205-based motherboard (the 8INXP) last November, they also introduced a new marketing campaign centered on the word "dual". Today, Gigabyte is continuing that campaign with the Gigabyte SINXP1394 (the “1394” stands for FireWire support), based on Silicon Integrated System’s dual channel DDR chipset, aptly dubbed the 655. Just as the 8INXP was marketed as "The 6-Dual Miracle”, so will Gigabyte’s SINXP1394. We’ll recap what Gigabyte considers “The 6-Dual Miracle” for your reference here:

1. Dual Power System (DPS): this is a separate, add-in card that gives the SINXP1394 6-phase power circuitry instead of 3-phase. Gigabyte claims that, in Parallel mode (versus Backup mode), DPS is able to deliver better system stability (especially while overclocked) in addition to longer onboard components life. Skip to the BIOS and Overclocking section for our test results with DPS installed. 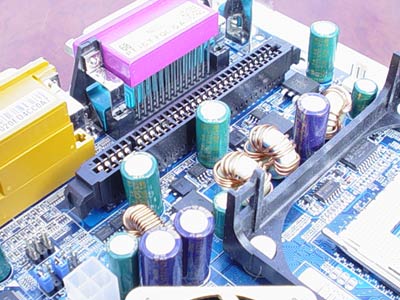 2. Dual Logical Processors: this is nothing more than Gigabyte's way of saying their board supports Intel's Hyper Threading technology. Supposedly, later SiS 648 steppings (B revision) support Hyper Threading as well.

3. Dual Channel DDR: essentially, a chipset that supports dual channel operation effectively doubles the peak memory bandwidth available (versus the traditional single channel solutions that currently dominate the market of course). For example normally, if you had two DDR400 modules installed in a conventional single channel motherboard, the available peak bandwidth would never exceed 3.2GB/s. However, with a dual channel motherboard like the SINXP1394 that peak bandwidth is now doubled to 6.4GB/s. In fact, 6.4GB/s of peak bandwidth is exactly what the SINXP1394 is capable of offering simply by choosing a specific BIOS ratio. This is despite the fact that the SiS 655 chipset “officially” supports no higher than Dual DDR333 operation.

4. Dual RAID: this is Gigabyte's way of saying their board supports both Serial ATA RAID (via the SI3112A controller) and IDE RAID (via the GR IT8212F controller). Read on to find out more about these two features.

5. Dual BIOS: this feature is also fairly self-explanatory. The SINXP1394 supports two BIOS chips. This feature is nice to have if you corrupt your first BIOS chip (e.g. you lose power to your system as you're updating your primary BIOS). You can switch over to the second BIOS chip in this situation, and not have to go through the trouble of correcting the issue through other, time-consuming means such as a board RMA or the swap-trick.

6. Dual Cooling: this is the least interesting of the six "Dual Miracles". The North Bridge HSF and DPS HSF form the "Dual Cooling" feature. We’d like to reiterate to Gigabyte that calling this a feature is beyond tacky.

We see that Gigabyte opts for Intel’s Gigabit LAN chip, dubbed RC82540EM. The Gigabit Ethernet standard will eventually go mainstream, but for now we see it only being used on high-end boards as Gigabit switches/hubs are not as common among end users. There are very few motherboards that use this LAN chip; some include ASUS’s P4G8X, MSI’s 845PE Max2-FIR and Tyan’s S2662.

For onboard sound, Gigabyte chose a common controller; Realtek's ALC650 chip. This chip is standard among motherboards based on NVIDIA’s nForce2 chipset, and we have had no complaints about the quality of its DACs.

There’s nothing of note about the SINXP1394’s I/O configuration. Included are two PS/2 ports, two serial ports, one parallel port, a Game port, two rear USB 2.0 ports, a Gigabit LAN port, and Mic In, Line In, and Line Out, which drive the onboard sound. We’d like to see Gigabyte (and all motherboard makers for that matter) standardize their I/O ports to reflect that of ABIT’s I/O setup, which is a bit more feature-rich and useful. For example, parallel, serial and game ports are becoming less and less useful everyday. We’d like to see more USB 2.0, FireWire and SPDIF ports instead, as ABIT has continually done with their MAX series of motherboards. 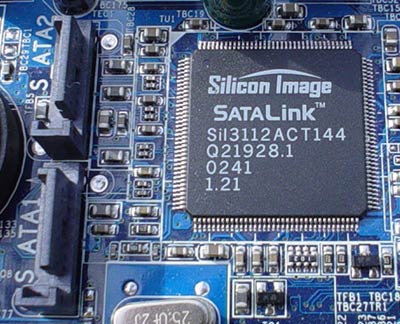 The SINXP1394 carries over yet another feature that can be found on the 8INXP, and that is its Serial ATA controller from Silicon Image, dubbed the SI3112A. This particular Serial ATA RAID controller has been gaining lots of momentum recently, especially with high-end motherboards. Some of the motherboards we’ve reviewed over the last few months that have the SI3112A controller onboard are the ABIT NF7-S (nForce2 SPP), ASUS P4G8X (E7205), ASUS A7N8X Deluxe (nForce2 SPP), Intel D845PEBT2 (845PE), Epox 4PEA+ (845PE) and ECS L4S8A (SiS 648). If you don’t already know by now, the 3112A is capable of supporting up to two independent Serial ATA devices, as well as RAID 0 (striping) and RAID 1 (mirroring).

The SINXP1394’s IDE support is more than adequate for most users. The Primary and Secondary IDE connectors support two channels each, or up to four IDE devices total. There are an additional two IDE connectors, which is powered by the GigaRAID IT8212F controller. This is the first motherboard we’ve encountered that utilizes this particular RAID controller, so we haven’t had much experience with how it compares to onboard RAID solutions from Promise, HighPoint and others. This GigaRAID controller was developed by ITE, and is in fact RAID 0 (striping), RAID 1 (mirroring) and RAID 0+1 capable (as well as compatible with the ATA133 interface). You can read more about this IDE RAID controller here.

Both IDE RAID connectors support 2 channels each or up to four IDE devices total. Therefore, you should be able to have 8 IDE devices running at once with the SINXP1394. However, what makes this GigaRAID controller even more special is the fact that it can support ATAPI devices (i.e. optical drives like a CD-ROM, DVD-ROM, CD-RW, etc.). Most motherboards feature onboard RAID controllers that lack support for ATAPI drives, and therefore you’re only able to connect hard drives or some derivative thereof. For those serious users looking to hook up four optical drives and four hard drives to their system, the GigaRAID IT8212F-powered Gigabyte SINXP1394 is a great choice.