Because the Hasselblad True Zoom Mod covers up the Moto Z’s rear camera when attached, it’s only natural to wonder if it actually provides a boost to image quality. To help answer this question, we’ll be comparing pictures taken with the True Zoom in various lighting conditions to those from all three Moto Zs (Moto Z Play Droid, Moto Z Droid, Moto Z Force Droid) along with the LG G5 and Galaxy S7, which have some nice cameras.

Right out of the gate the True Zoom produces the worst image of the group. Its white balance is good and it avoids overexposing and clipping the white clouds like all three Moto Zs, but it has significantly more noise in the sky than all the other phones—visible even when zoomed out—and it shows less detail. The corners and edges of its image look particularly soft.

The Moto Z Play, despite being the entry level Z, captures a better image than the Moto Z and its older Sony IMX214 sensor. The Moto Z Play still overexposes its image like the Moto Z Force, but it does a good job setting the white balance and captures a lot of fine detail. 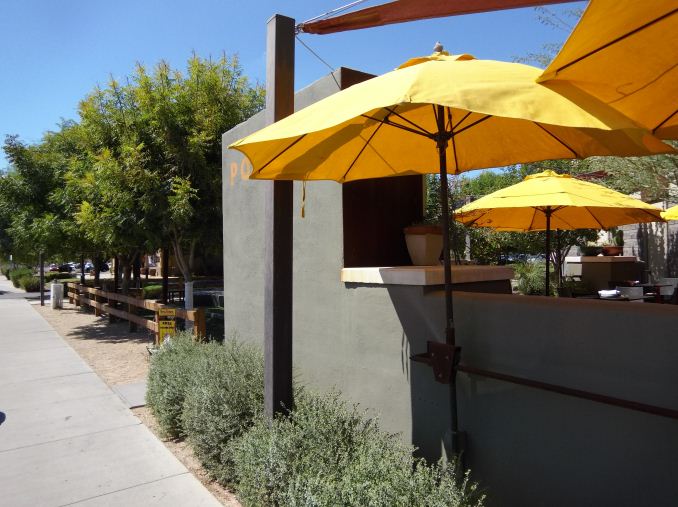 Most of the cameras do well setting exposure and white balance in our second daylight scene, where I kept HDR disabled even though there’s an equal mixture of brightly lit and shadowed areas. The Moto Z and Moto Z Force capture brighter images, but clip the bright reflection on top of the umbrella. The Moto Z’s white balance is just a hint warm, while the Moto Z Force’s image is just a tad yellow, although these are not major issues. Once again the True Zoom gets the exposure and white balance correct.

The Moto Z Force, Moto Z Play, and Galaxy S7 all capture a lot of fine detail, although the latter’s 12MP sensor runs out of resolution when trying to resolve the text on the signs and texture on the building in the far background. The detail the S7 captures is very sharp, however. With heavier noise reduction processing, object edges in the G5’s and Moto Z Force’s images look just a little blurrier. The Moto Z Play’s image sharpness is just a step behind the Force’s, but still significantly better than the more expensive Moto Z’s, whose aggressive noise reduction processing smears away texture on the gray wall along with everything else in the picture. The True Zoom does a little better than the Moto Z, but is still noticeably worse than the Moto Z Play.

While noise is not an issue for either the G5 or S7 in this scene, all three Moto Zs do a little better job smoothing away noise grain. This is not the case with the True Zoom, which, once again, shows significantly more noise than the other cameras in this roundup, to the point that it becomes visibly distracting. There’s also some purple fringing along a few edges in its image that appear to be byproducts of post-processing.

The Moto Z Play, despite being the entry level Z, captures a better image than the Moto Z and its older Sony IMX214 sensor. The Moto Z Play still overexposes its image like the Moto Z Force, but it does a good job setting the white balance and captures a lot of fine detail. 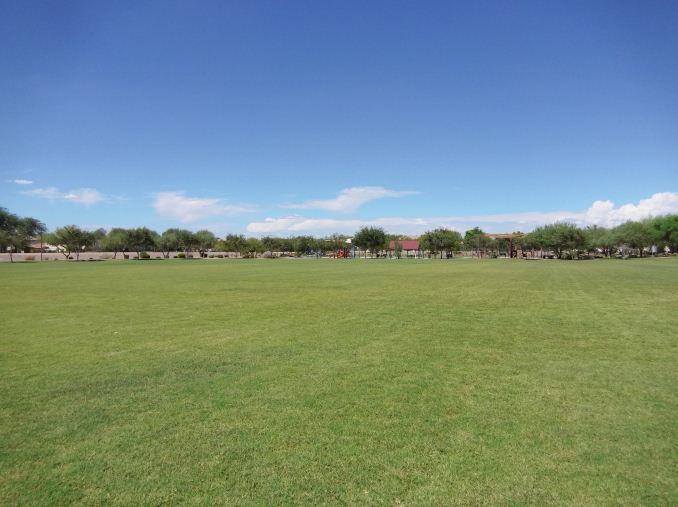 The True Zoom’s headlining feature of course is its 10x optical zoom. Zooming in on the park across this field, the True Zoom just blows the other cameras away. There’s a lot of detail visible in the trees and grass, and it’s even possible to count how many lines of text there are on the white sign to the right of the orange slide. There’s a little bit of noise and edge fuzziness, but it’s certainly a useable image.

This is in stark contrast to the digital zoom used by the other cameras and their fixed focal length lenses. Digital zoom involves cropping and blowing up the original, non-zoomed image, resulting in a substantial loss of resolution, coupled with some post-processing to try and enhance the mess this creates. The LG G5 does pretty well, considering, producing an image that still shows some detail. The Moto Z clearly does the worst; I mean you can tell it’s a picture of a park if you look closely, but I would not consider it a useable picture. 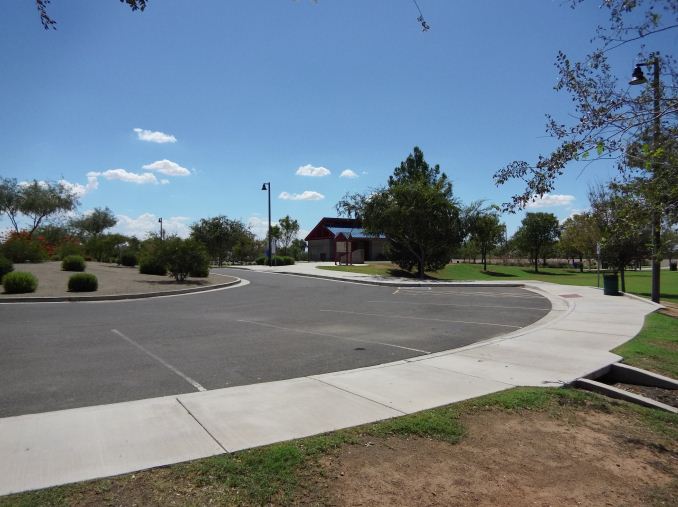 In this second example, the LG G5 and Galaxy S7 produce acceptable images using their digital zoom features, clearly showing the individual bricks on the building but not able to resolve their texture. Likewise, it’s possible to see which areas of text and images on the sign out front, but it’s impossible to read the text or see what the pictures show. All three Moto Zs show even less detail, and there’s very obvious white halos around the building and trees from edge sharpening; apparently Motorola’s unsharp mask filter does not scale with zoom level, resulting in very wide, light-colored bands around dark objects.

The True Zoom’s image is actually quite impressive. We can actually see some texture on the bricks and the hatch pattern on the green trash receptacle. Even the photos and some of the text on the sign are visible! This photo basically explains why this product exists. 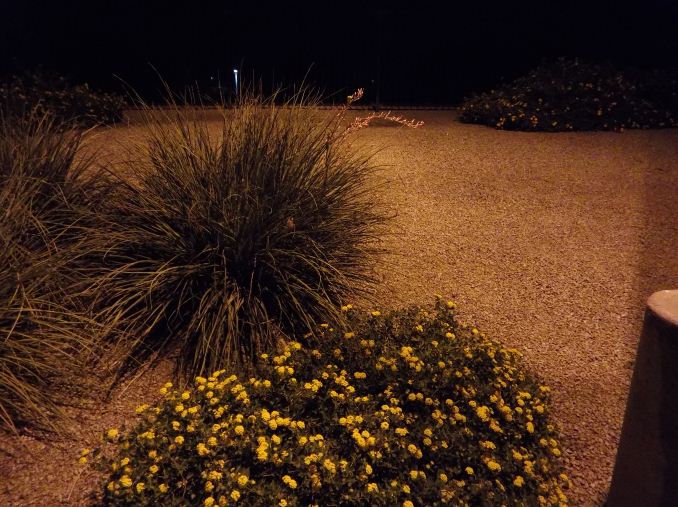 It’s difficult to pick a winner in this dark scene lit by a single yellow sodium lamp, because each camera falls short in at least one area. The LG G5, Moto Z Play, and Galaxy S7 capture the brightest images, while the True Zoom’s is the darkest of the group. It also sets white balance too warm, a problem shared with the Moto Z, G5, and S7. The image with the most accurate colors belongs to the Moto Z Play.

Looking closely at the rocks and bushes, it’s clear the S7 and Moto Z Force capture the most detail. The rocks in the True Zoom’s picture also show quite a bit of detail, but its noise reduction processing produces some yellow splotches. The Moto Z Play had difficulty focusing, resulting in a blurred image, and the Moto Z’s aggressive noise reduction leaves the rocks and bushes looking unnatural. The G5’s noise reduction processing performs poorly here, simultaneously smearing away a significant amount of detail while leaving behind the most visible noise grain.

The Hasselblad True Zoom Mod’s main competition is small point-and-shoot cameras, which is reflected in its design, features, and price. It certainly looks like a camera, and when it’s attached to any of the Moto Zs, the total package is about the same thickness as a standalone camera. The downside to the modular approach, however, is weight. With about twice the heft of a typical point-and-shoot, it’s far less pointy. Fortunately, the rubberized coating and raised, textured grip make it easy to hang on to with one hand. Its dual-stage shutter button works well, but the plastic zoom dial feels a bit cheap and works like an on/off switch, making it difficult to zoom smoothly or select an intermediate zoom value.

Having a true 10x optical zoom, brighter flash, and AF assist light all extend the capabilities of the typical smartphone camera experience. Its 1/2.3" format sensor is common in point-and-shoots and even in some smartphones, though, and for this reason, the True Zoom’s image quality is not any better than what’s attainable with a flagship phone. The cameras in the Moto Z Force and Moto Z Play produce better images in all lighting conditions, and while the True Zoom captures more detail than the Moto Z, its images are noisier. 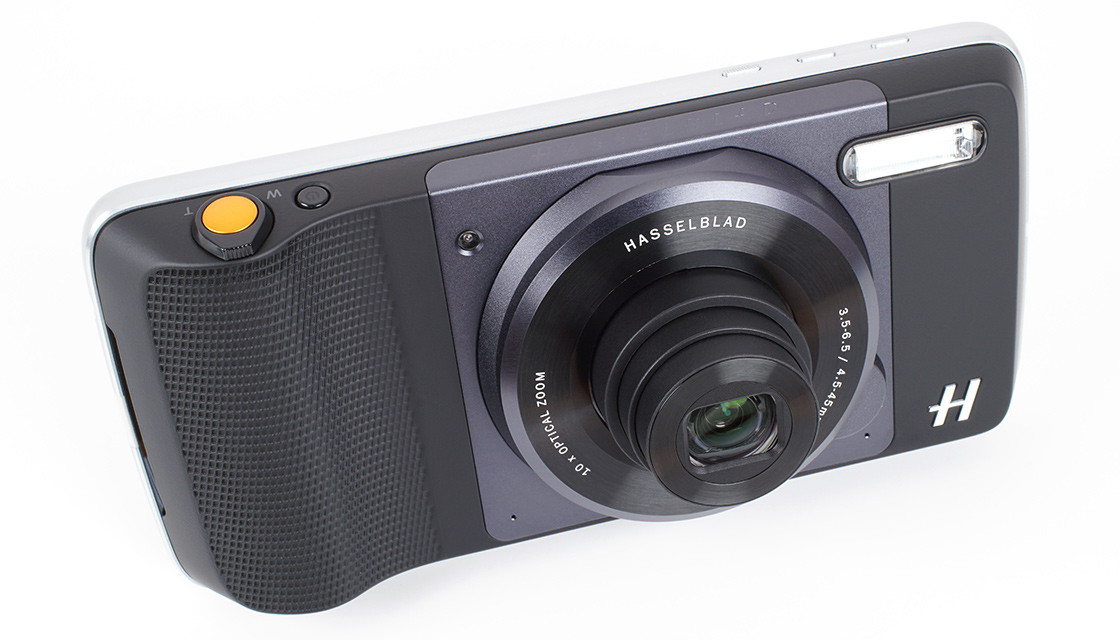 The True Zoom’s video recording capabilities are not as robust as the Moto Zs’ native cameras either. It only supports up to 1080p24, which makes scenes with any motion or panning look rather choppy. The lens’ zoom motor makes a fair bit of noise too, which comes through loud and clear in the recorded video. The True Zoom does have very good electronic image stabilization, though.

Based on its performance and weight, the True Zoom is not a camera replacement that would be left attached all the time, but rather a tool that augments the existing cameras in the Moto Zs in situations that require the use of its headline feature: 10x optical zoom. Not only can it magnify objects at a pretty significant distance, but its image quality at maximum zoom is phenomenal compared to the blurry mess that comes from using a smartphone’s next-to-useless digital zoom.

The True Zoom costs $300 directly from Motorola or $250 from Verizon, which is about the same price as a standalone point-and-shoot. If the True Zoom delivered better performance than the Moto Zs’ built-in cameras at all zoom levels and in all lighting conditions, it could be a worthwhile upgrade. It does not, however, which makes it specialized tool that’s best used for taking good pictures of objects more than about 20 feet away.