Improved memory bandwidth and reduced latency constitute the performance benefits of using high frequency SODIMM kits in the NUC6i7KYK. Another aspect is the difference in power consumption between the various modules. Intel's Skylake-H datasheet mentions that increasing the DDR4 rate from 1866 MHz to 2133 MHz may lead to a TDP power penalty of up to 400mW. This is only on the processor side, and doesn't consider the memory kit at all. To get a full view of the impact of different memory kits, we monitored the power consumed at the wall by the Skull Canyon NUC with an idle desktop and averaged it over a duration of 1 hour. 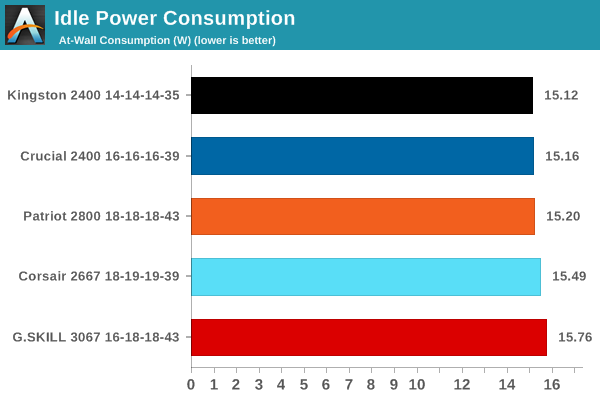 As expected, higher frequency kits do consume more power, but, again, the differences are minimal and may even vary from one idle time interval to another. 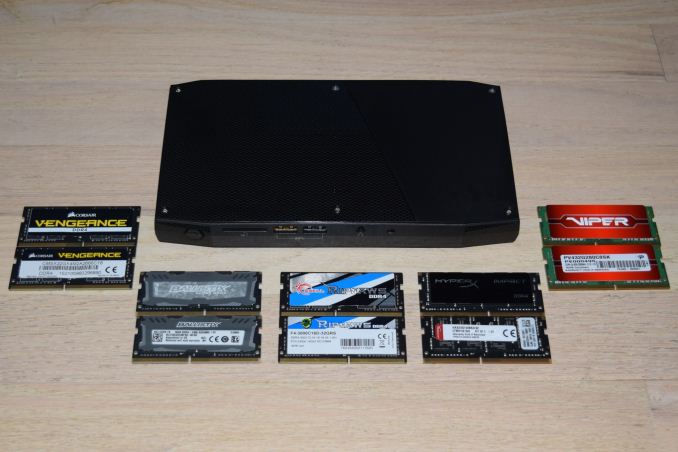 We looked up the pricing for the various 32GB kits prior to posting, and found that the street price varied from $140 to $190. Thanks to its stellar specifications, the G.Skill Ripjaws F4-3000C16D-32GRS is able to command the highest street price. The Crucial kit is the most economical of the lot.

Wrapping things up, we have put various 32GB DDR4 SODIMM kits through different benchmarks in the NUC6i7KYK, and what we have found is that they all largely perform the same when it comes to real-world workloads. Strict speaking, faster kits do improve average performance, but the ever so slight performance increase isn't enough to matter. With that said, there are a few workloads that can definitely benefit from the faster memory kits, but they tend to be professional use-cases rather than the kinds of consumer workloads Skull Canyon was meant for, such as entry level gaming.

I suspect that the processor configuration (128MB eDRAM) is playing a major role in ensuring that the experience with normal real-world workloads remains the same irrespective of whether it is running a 2400 MHz C16 kit or a 3000 MHz C16 one. The eDRAM keeps the obvious memory bottleneck - the iGPU - from being bandwidth starved, and it can also better feed desktop applications in some situations as well. However if that's the case, then desktop and notebook system users with a different non-eDRAM processor might observe different results. Ultimately if price is not a major concern, going with the G.Skill Ripjaws 3000 MHz kit is good for any system that supports DDR4 SODIMMs operating at that frequency. Otherwise, we recommend that consumers go for the kit that offers the best value for money at the time of purchase.