What goes on in Dresden?

AMD’s Fab 30 was the home of the first Athlon processors to use Copper interconnects and it will be the exclusive home of Athlon 64 and Opteron processors upon their launch. Fab 30 started out as a 0.18-micron manufacturing facility but as of Q4 2002 has completely transitioned to manufacturing 0.13-micron parts, exclusively. AMD will continue to manufacture only 200mm wafers (8”) in Dresden but the plant will transition to 90nm manufacturing in 2004. With AMD’s CPUs in 2003 being manufactured out of Fab 30, that leaves Fab 25 in Austin to handle the production of flash memory.

As we mentioned in the introduction, AMD Saxony is more than just Fab 30, it also encompasses AMD’s Dresden Design Center (DDC). The Dresden Design Center was started as AMD’s focus for chipset design, but now that their task is almost complete the DDC will shift to handling AMD’s PCS (Personal Connectivity Solutions) devices. The DDC’s concluding task at this point is the development of AMD’s 8th generation chipset logic, primarily the enabling chipsets for Athlon 64 and Opteron. With AMD’s 8000 series development complete and strong industry support to continue to develop future Athlon 64/Opteron chipsets, AMD can shift the focus of the DDC to other things. 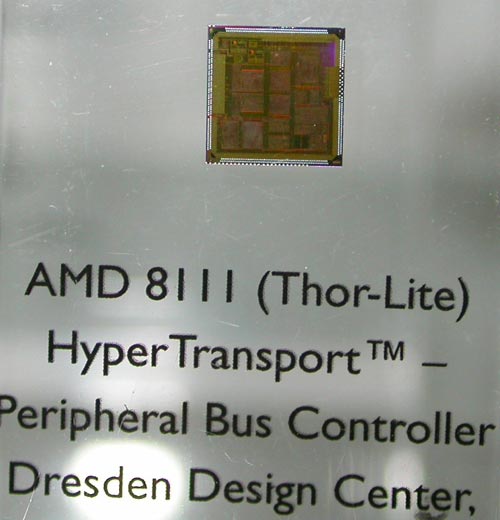 The combination of the Fab and the Dresden Design Center (DDC) was said to require a $2.3 billion investment, with close to $2B already spent and the remaining $300M due to be used by the end of 2003. For an advanced microprocessor fabrication facility like Fab 30 this is the going rate for start-up costs, which is a major part of the reason why there are only two big competitors in the desktop CPU market; with such high barriers to entry, it’s very difficult to become a mass market competitor in the CPU business.