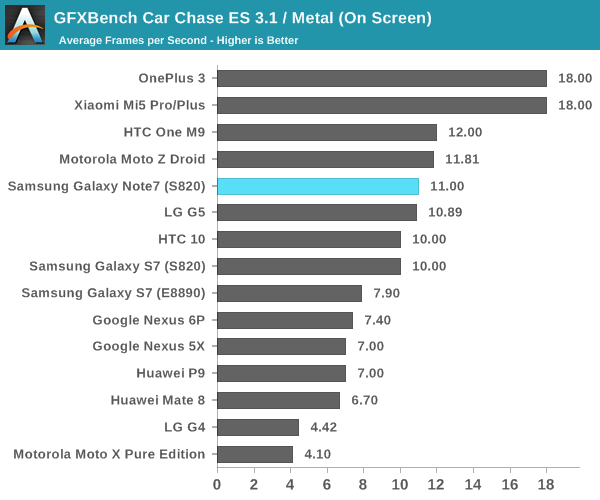 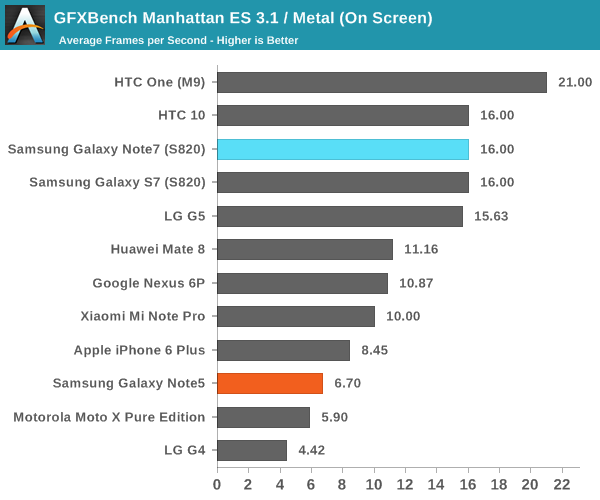 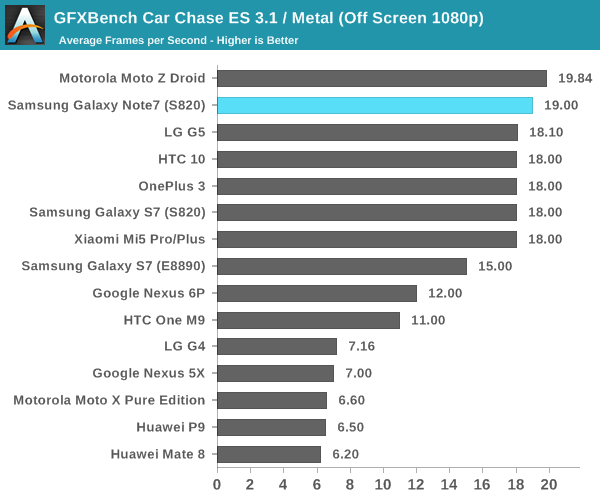 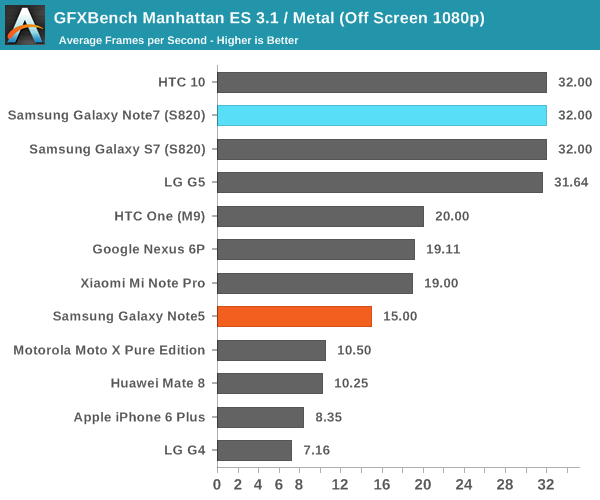 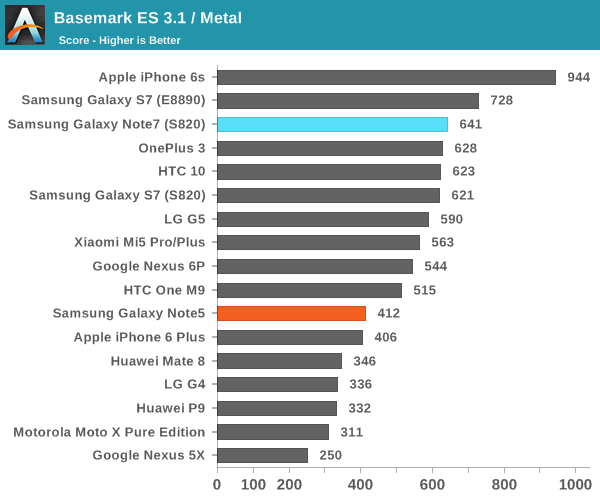 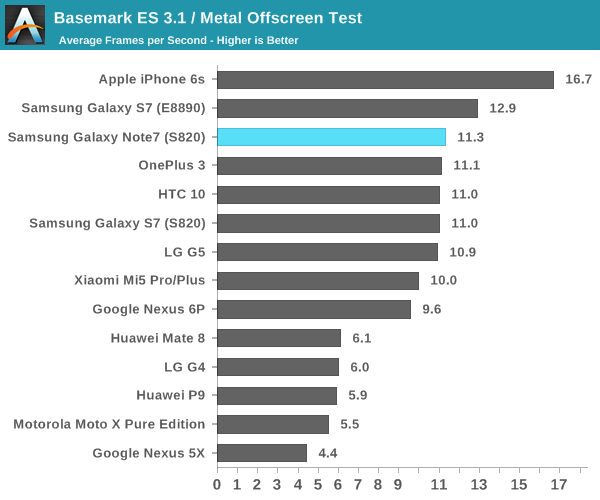 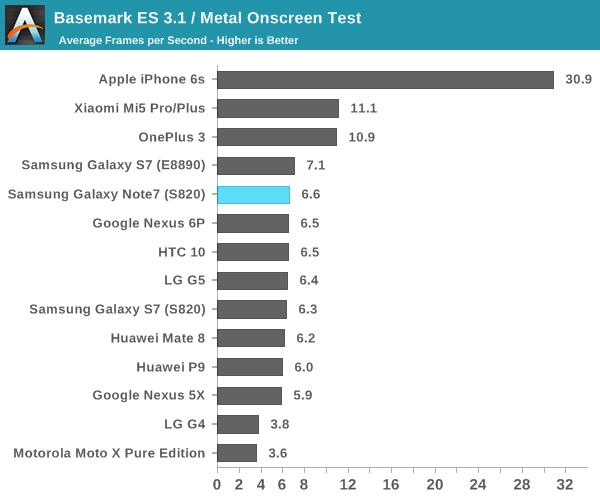 It's probably no surprise, but the Galaxy Note7 performs as expected with the latest drivers and in ideal thermal conditions. The Adreno 530 should be more than sufficient for the forseeable future but for maximum performance it's best to enable 1080p rendering or lower to maximize frame rates in games like Real Racing 3 that tend to really use the GPU to its fullest extent.

Of course, while Discomark provides a sort of holistic view of performance for a specific task, it’s also important to at least try and break down the various aspects that impact system performance so rather than simple black box testing we can further understand what factors influence performance and therefore provide additional information to make better buying decisions. One of the major contributors to general purpose performance is going to be storage performance, which is often something often ignored by marketing as the nitty gritty details of NAND storage realistically require some background in solid state physics and devices to understand, as well as some understanding of computer science and engineering.

While I’m not really happy with the state of our mobile storage benchmarks, for now I don’t really see another option here as the publicly available storage benchmarks for Android and iOS are fairly basic. Putting aside the state of the benchmarking industry, our current benchmark remains AndroBench 4 which provides at least some basic storage benchmarking capabilities. We use custom settings with this benchmark which attempts to make the test more realistic as the default settings are just wildly unrealistic. This includes adjusting the buffer size, increasing the file size to 100 MB, and only using one thread instead of 8. 256KB file size is targeted as this is the most common block size if you profile this kind of thing for sequential writes and reads, while 4KB block sizes are the most common for other tasks as the vast majority of computer architectures use 4KB pages for virtual memory. Single-threaded I/O is common in most cases because multi-threaded programming is still difficult for most people to reason about in an effective manner because conscious thought is inherently serial in nature with some multiplexing. In addition to this, many eMMC solutions on the market don’t really perform well with multiple threads simultaneously as the controller can’t do anything with extra requests other than reply with a busy signal which already happens with a single thread.

Putting aside discussions of testing we can take a look at the storage solution used in the Galaxy Note7 before getting into the actual results. The Note7 continues to use basically the same storage solution as the Galaxy S7 and S6, which is to say an MLC-based solution that has a UFS Gear 3 single lane interface for bandwidth up to 600 MB/s and basically has the exact same model number if you check the SCSI devices attached to the system save for some changes that indicate the higher 64GB storage relative to the 32GB chips that are most common in the Galaxy S7. 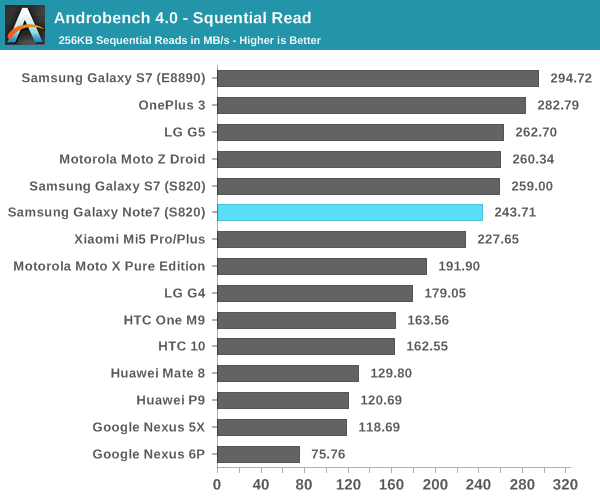 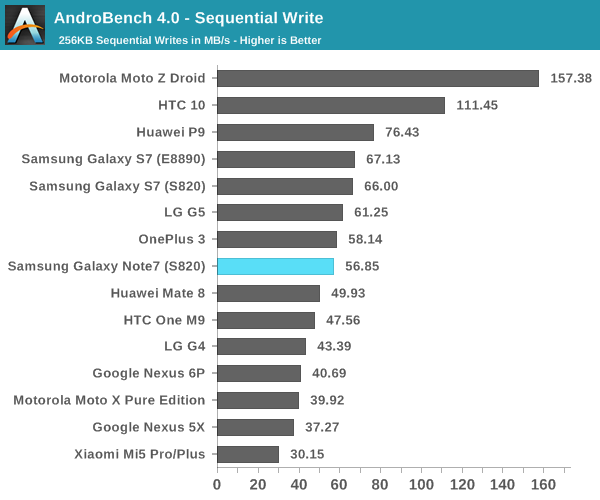 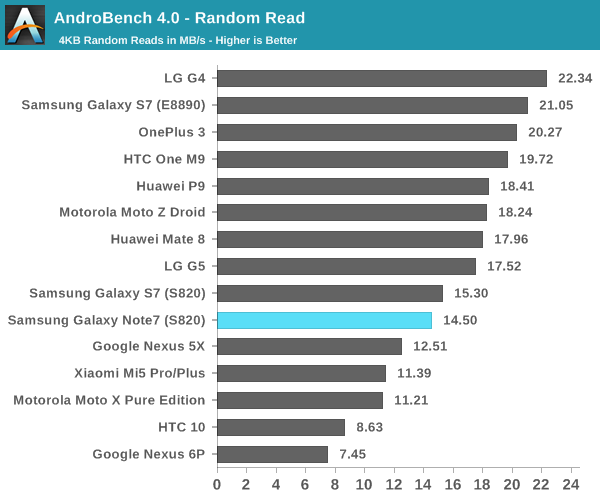 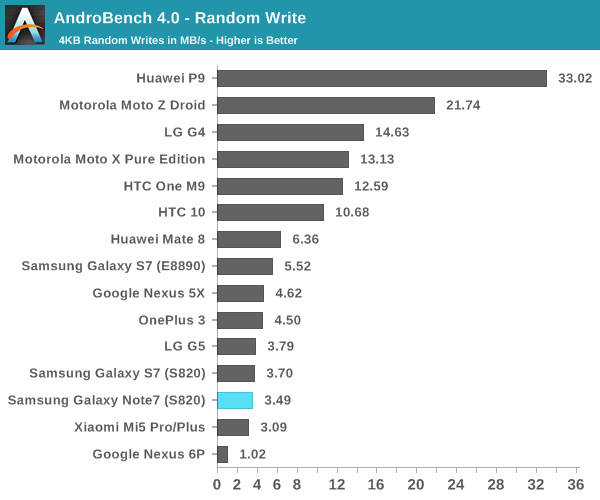 Looking at the test results it performs exactly as quickly as you’d expect from this MLC solution as we’ve tested it in the Galaxy S6, S6 edge, S6 edge+, Note5, S7, S7 edge, and now the Note7 as well as the LG G5. The performance here is acceptable but obviously if you look at burst performance the iPhone 6s has a faster solution due to the hybrid SLC/TLC storage solution. The main benefit of pure MLC NAND is that performance is more consistent as there’s no precipitous drop when the SLC buffer fills. There’s always room to improve but I don’t really see how it’s going to happen unless Samsung moves to V-NAND for the next generation.