This has been a fairly long review despite the Galaxy Note7’s similarity to the Galaxy S7 edge so it’s well worth recapping everything that has been said thus far before we get into whether the Galaxy Note7 is worth buying or not. The first and most obvious place to start is the design of this phablet. For better or worse, this looks a lot like the Galaxy S7 edge, but it’s been cleaned up in noticeable ways. The Note7 has USB-C and USB 3.1 gen 1 which improves the design with a reversible USB connector, and the design in general is much more symmetrical with things like the volume buttons, power buttons, SIM tray, USB port, 3.5mm jack, and speakers all aligned to some extent. However, things like the top microphone port and the sensors flanking the earpiece are not really symmetrical. ID detailing does matter to some extent, but given how hard Samsung was pushing this narrative of symmetrical design I really fail to see how they can miss on these small details. The design is still acceptable now, but I think by next year Samsung really needs to have a new design ready that isn’t just two slabs of 3D glass with an aluminum frame in the middle. It doesn’t need to be something completely new but it does need to be different enough that you don’t have to closely examine the phone to figure out what model it is. 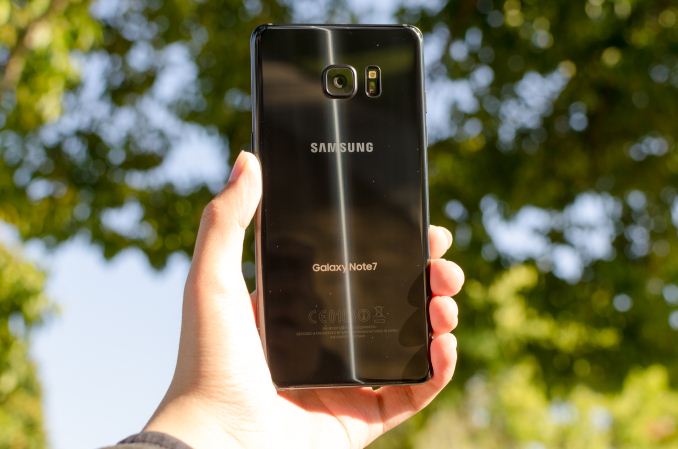 Moving past design the display of the Note7 is just clearly great. It’s one of the brightest on the market and has great contrast as well as excellent color accuracy. The reduced curvature relative to the Galaxy S7 edge also significantly improves the viewing angles of the edge although the subpixel arrangement still negatively impacts viewing angles. While the display is great it’s basically the same exact display that shipped with the Note5 for better or worse with the addition of an HDR mode that I was unable to use at all. A minor bump in power efficiency or improved viewing angles would go a long way to making the Note7 more attractive, but as-is there’s nothing really wrong with it. I’m not a huge fan of the edge display as far as usability goes but if you don’t use screen protectors there’s absolutely nothing wrong with the design of the display. 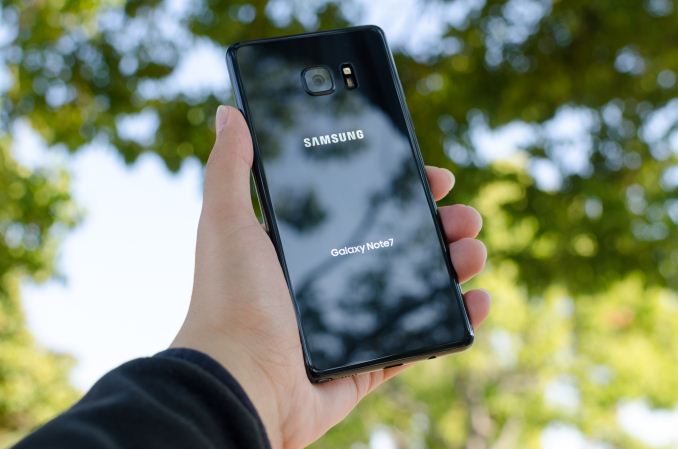 Of course, if we’re talking about power efficiency it also means that we need to talk about battery life. While the Note7 delivers solid battery life, it’s definitely a step down from the great battery life of the Galaxy S7 edge due to the addition of the S-Pen. If you care a lot about battery life you’ll have to make the choice between whether the S-Pen is worth the minor drop in battery life relative to the S7 edge. The lack of updated SoCs or really anything significant here means power efficiency is identical to the Galaxy S7 lineup. Charge time remains fast, but the lack of QC 3.0 or anything more advanced makes the device get fairly warm and reduces battery lifespan. 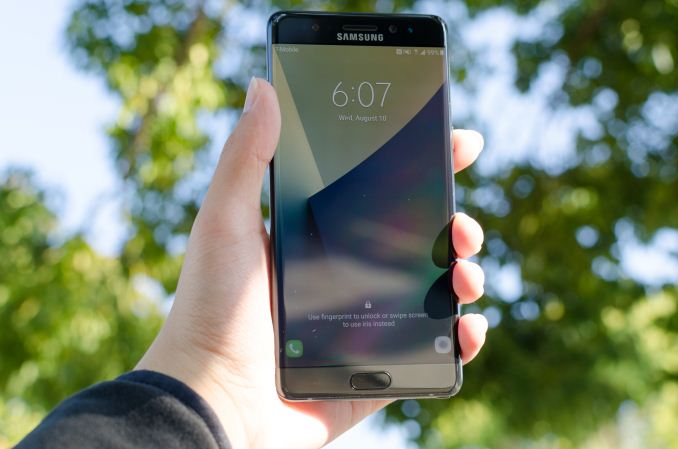 As far as system performance goes the Note7 is pretty much a dead ringer for the Galaxy S7. It actually gets even slower in Discomark on cold runs although thankfully it improves over the Galaxy S7 for hot runs. The Galaxy Note7 performs well in benchmarks but the closer we get to real-world testing the more apparent it is that Samsung is not really doing well in real-world benchmarks which is concerning. Obviously if Samsung continues to see rising profits they’re going to completely overlook everything written here, but I wouldn’t be surprised to see people notice relative differences in performance more and more as people get used to devices like the HTC 10 and iPhone 6s which are smooth and fast in real-world usage. Performance in game-based benchmarks continues to be excellent given the Adreno 530 GPU and NAND performance is also good, although burst performance is not as high as competing SLC/TLC hybrid solutions on the market. 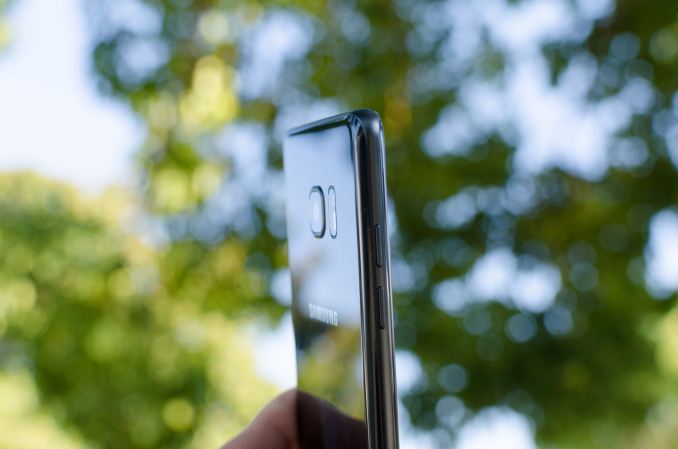 As far as camera goes, the Galaxy Note7 continues to ship with the fastest camera on the market. Focus latency and capture latency are really unlike anything else on the market and the Note7 rolls back some of the excessive sharpening but I’m not really a fan of the lack of fine detail on most of the camera shots produced by the Note7, nor is the lack of proper stabilization in video all that impressive. These are things that should be fixed by default and I think the drive for the thinnest module possible has significantly impacted camera quality relative to the Galaxy Note5. If you only value speed, dynamic range, and extreme low light capability then the Note7 is probably still the best camera on the market, but if image quality outside of extremely dark situations matters I would argue that HTC has done a better job with the HTC 10’s camera even with its issues with optics and lack of 1080p60 or 720p240 video modes. 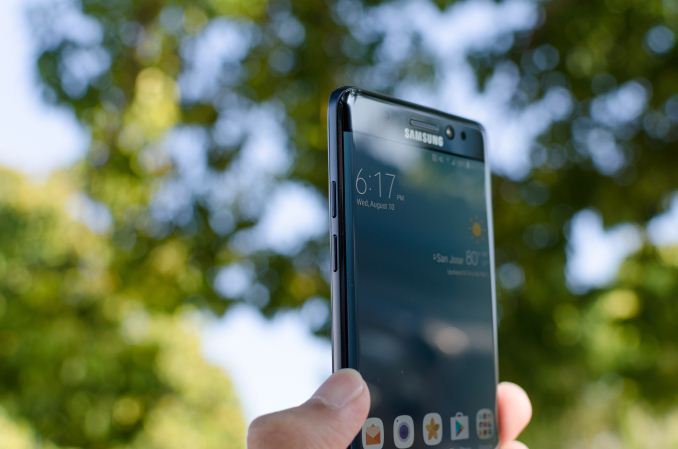 The final piece worth discussing before we discuss overall value and evaluation is software. TouchWiz has been redesigned which is good and it looks a lot better than before and things like the iris scanner are actually useful and work well which is amazing considering how this is the first Android smartphone with an iris scanner. However, TouchWiz still has some strange navigation behaviors that need to be cleaned up before it’s completely free of usability issues, and things like the S-Pen Translate function are just really pointless from the time I’ve used it and don’t need the S-Pen at all to function well. Animated GIFs work well, but are not really a must-have feature. My major complaint here continues to be a general lack of performance as things like scrolling don’t feel like they have the momentum or response that they should and I still see frame drops that don’t happen in comparable devices. 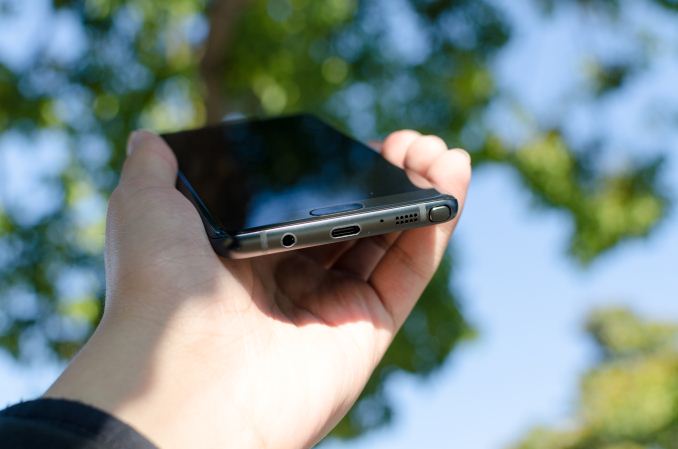 With all of this said I think the Note7 is fairly checkered. I’m sure there are people that want to buy one because it’s the only phablet on the market that really does a stylus well and if you’re someone that wants the Note7 for the stylus then you should stop reading now and go buy one because everything else on the market won’t meet your needs. If the stylus is just something that’s nice for you to have then the calculus gets much more difficult and the recommendation is no longer unconditional. The Galaxy S7 edge is currently about 750 USD and you can easily find people reselling new ones for any operator or international variants on Amazon for 600 USD or so. The Note7 does appreciably improve on the Galaxy S7 Edge, but it’s basically the S7 edge in a new package and with an S-Pen. You also get an extra 32 GB of storage which does justify the extra 100 USD that bumps the Note7 up to 850 USD. 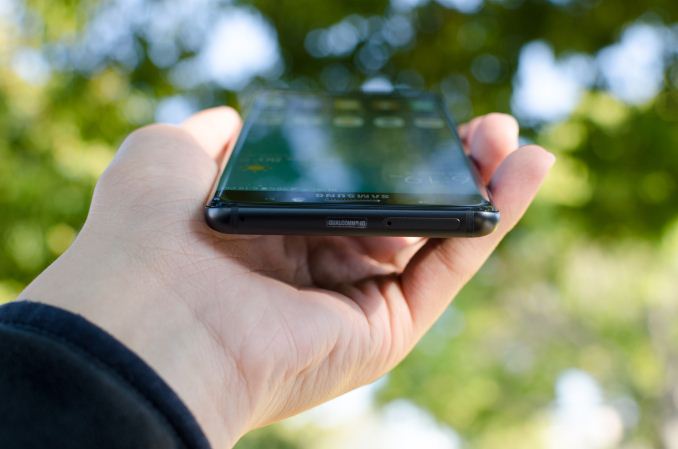 With all of that said, I get the distinct sense that it will be much harder to justify the price well before the end of this year. The camera quality is kind of a disappointment given all of the hype at the launch of the Galaxy S7 given the dual pixel sensor and larger 1.4 micron pixels when the camera quality itself is not really an improvement over the Galaxy Note5 and is beaten out by the HTC 10. The software experience still shows dropped frames. There are still software features that feel like obvious gimmicks. The design is still lacking ID detailing. I’m sure other people will praise this device anyways but when a phone is this expensive and with smartphones in general getting polished to a mirror sheen each scratch becomes more obvious no matter how minor. 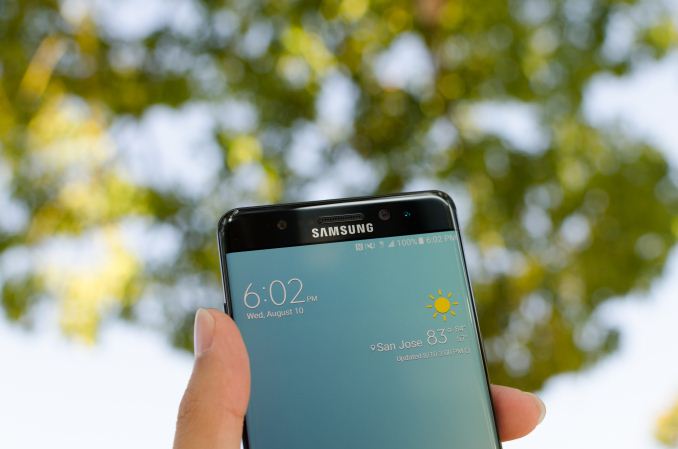 A lot of things are going to seem like nitpicks but the whole point of paying 400 USD more is so that the ID and engineering in both hardware and software bridges the last mile. Again, this is still a good phone and it really is as good as it gets for now, but with so many fall launches coming up I find it very hard to whole-heartedly recommend this phone. The only audience I can really recommend this to are people that are absolutely set on a Samsung phablet, and even then if you won’t miss the S-Pen I think the S7 edge is pretty much the same experience for 100-200 USD less when the extra money gets you so little other than an extra 32GB of internal storage.

The Galaxy Note7 goes on sale August 19 on all four major carriers and at least a few preorders will be arriving within the coming days for an average price of 850 USD for the 64GB SKU in Blue Onyx, Silver Titanium, and Black Onyx.