Meizu’s PRO 5 is notable for being the only non-Samsung phone to use the Exynos 7420, the first SoC to use Samsung’s 14nm FinFET process. Meizu’s decision to use the MediaTek Helio X25, the first SoC with ten CPU cores, makes the PRO 6 noteworthy too. The X25, which is just an X20 with higher peak frequencies, arranges its ten cores in a tri-cluster topology. An extension of ARM’s big.LITTLE strategy, the additional CPU cluster is supposed to improve efficiency in the same way that adding gears to an automobile’s transmission improves fuel economy by making the best use of the engine’s power curve. The lower-power cluster uses four ARM Cortex-A53 cores at up to 1.547GHz for light workloads and basic background tasks. The second cluster also uses four A53 cores but their higher 2.002GHz peak frequency provides better performance for general workloads. The third, high-performance cluster uses two A72 cores at up to 2.522GHz.

The Helio X25 should give the PRO 6 a performance boost over the PRO 5. The PRO 6 matches the PRO 5’s 1.5GHz A53 cluster and provides the option to reach up to 2.0GHz on the second A53 cluster. For more demanding workloads, the PRO 6’s A72 cores hold a 20% frequency advantage over the PRO 5’s 2.1GHz A57 cores. The A72’s architectural enhancements should help too.

System performance is affected by more than just CPU frequencies and architectural differences, however. Software configuration plays an important role in how workloads are distributed among all the CPU cores and at what frequencies they operate at. The PRO 6’s Helio X25 also uses LPDDR3 RAM giving it significantly less memory bandwidth than the PRO 5 and current generation flagship phones that use LPDDR4 RAM. Another factor to consider is the potential for thermal throttling. The Helio X25 uses TSMC’s 20nm planar process instead of the 14nm/16nm FinFET processes of newer SoCs.

Meizu’s Flyme OS also provides the following power modes: Saving, Balance, and Performance. The Saving mode prioritizes battery life over performance by shutting down the A72 cluster and only using up to six A53 cores, where two cores have a max frequency of 1.547GHz and the other four are capped at 1.82GHz. The Balance mode can use all ten cores if necessary with four A53s at up to 1.547GHz, the other four A53s capped at 1.885GHz, and the two A72s also capped at 1.885GHz. The Performance mode makes all ten cores available at their max frequencies.

We tested the PRO 6 using both the Balance and Performance modes to see what effect these have on battery life and performance and present the results in the charts on the next few pages. 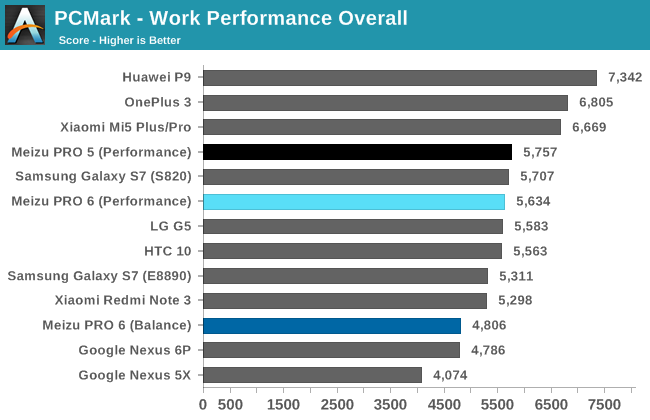 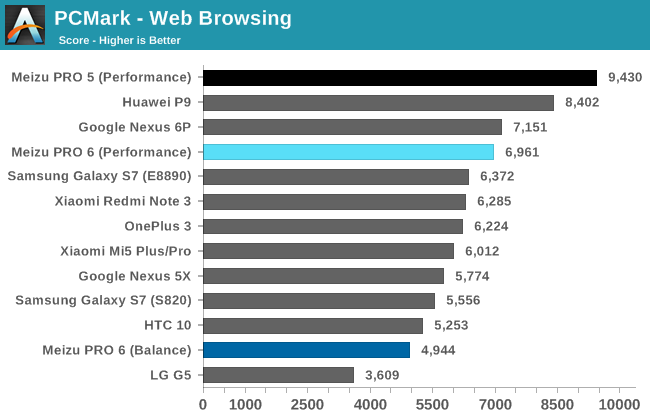 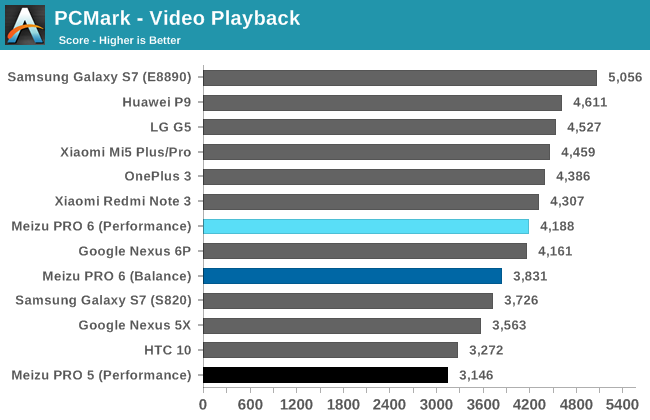 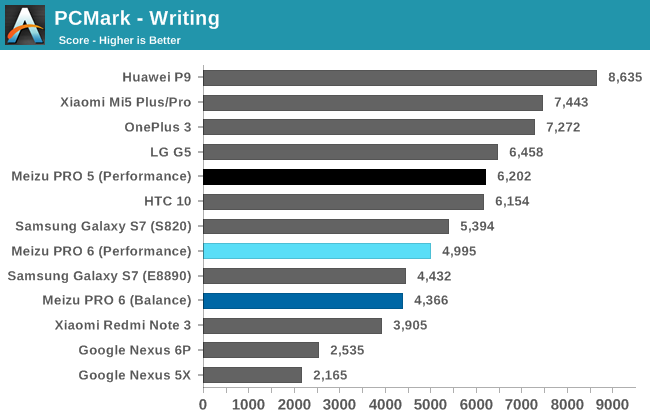 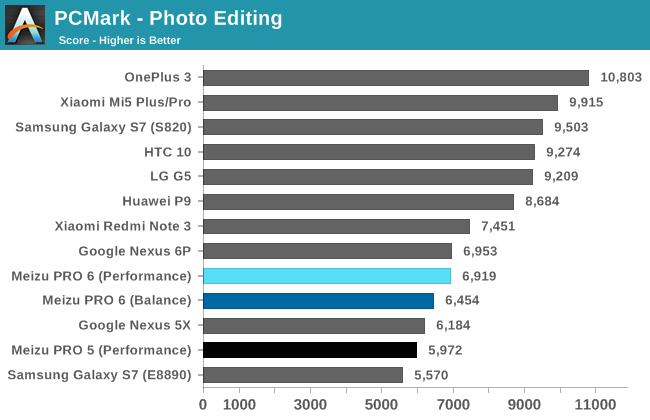 PCMark’s real-world workloads, which lean heavily on Android API calls, evaluate overall system performance by exercising the CPU, GPU, RAM, and NAND storage. The behavior it evokes from the CPU governor is also similar to the apps we use everyday.

There’s essentially no difference between the PRO 6 and PRO 5 when looking at the overall score, which is a little disappointing, although the PRO 6 is on par with the HTC 10, LG G5, and Samsung Galaxy S7, so it’s hardly a poor result. The PRO 6’s Balance mode is 15% slower overall than the Performance mode, putting it at the same level as the Nexus 6P.

The PRO 6 does well in PCMark’s Web Browsing test, outperforming several current generation flagship phones. It fails to match the PRO 5’s exceptional score, however, and sits between the other two phones in this chart with Cortex-A72 CPU cores. Huawei’s P9 performs 21% better in this test even though the four A72 cores in its HiSilicon Kirin 955 SoC have the same max frequency as the PRO 6’s cores. The Snapdragon 650 SoC in Xiaomi’s Redmi Note 3 contains two A72 cores with a max frequency of 1.8GHz. Despite an almost 40% frequency advantage, the PRO 6 is only 11% faster than the Redmi Note 3 in this particular test.

The PRO 6 performs similar to the Galaxy S7 in the PCMark Writing test, but trails the other phones using the Snapdragon 820 SoC. Once again we see Huawei’s P9 and the older PRO 5 outperform the PRO 6, this time by 73% and 24%, respectively. This is a surprising result and shows that in both the browsing and writing test workloads, the PRO 6 is underutilizing its two A72 cores. Running the PRO 6 in Balance mode only reduces performance by about 13%.

The Photo Editing test performs photo processing on the GPU, although spotty driver support for Android’s RenderScript API handicaps the performance of some phones. I suspect this is why the PRO 5 does so poorly in this test, getting beat by the PRO 6 by 16% despite having a much better GPU. While it shows a small improvement relative to the PRO 5, the PRO 6 cannot match the performance of other flagship phones and even falls behind the much less expensive Redmi Note 3. 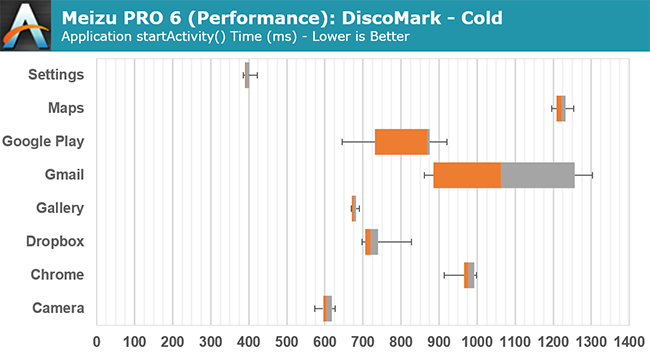 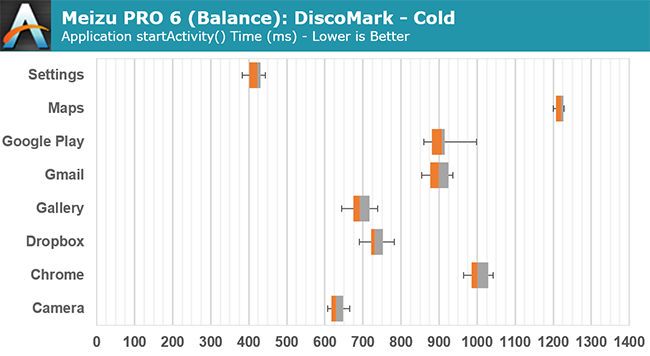 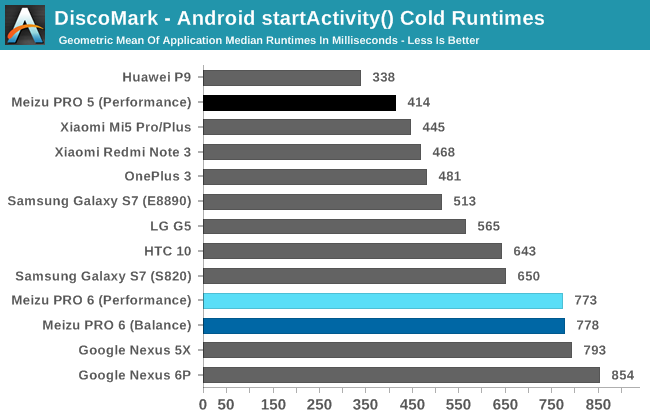 DiscoMark measures application launch times by monitoring the startActivity() method that signals the start of building the app’s UI elements. This provides a more accurate, repeatable method for quantifying a common task that directly impacts user experience. Unfortunately, the PRO 6 shows a serious regression when opening apps from internal storage, taking nearly twice as long as the speedy PRO 5. There’s essentially no difference in aggregate time between the PRO 6’s Performance and Balance modes, with both offering similar performance to Google’s Nexus phones. In my experience, devices that take longer than about 700ms to 800ms in this test begin to exhibit noticeable lag when opening apps. This is certainly true for the PRO 6, which feels just a little slower than the PRO 5 and other recent flagship phones. It’s not slow enough to be annoying, just slow enough to be noticeable. 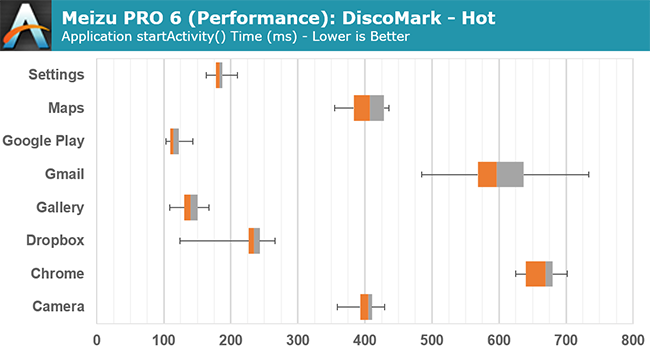 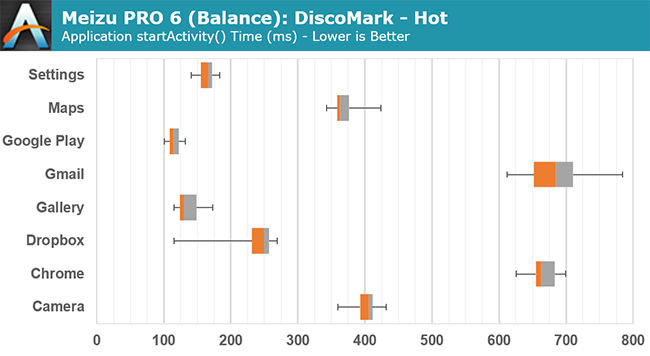 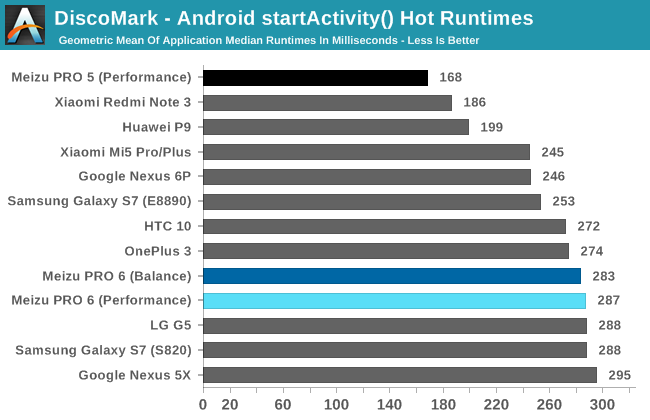 The hot DiscoMark times denote how quickly a device can switch between already open apps loaded in RAM. Once again the PRO 6 is slower than the PRO 5, with no difference between the Performance and Balance modes; however, its aggregate times are similar to other flagships, and the small time differences are not something you would be able to perceive in everyday use. 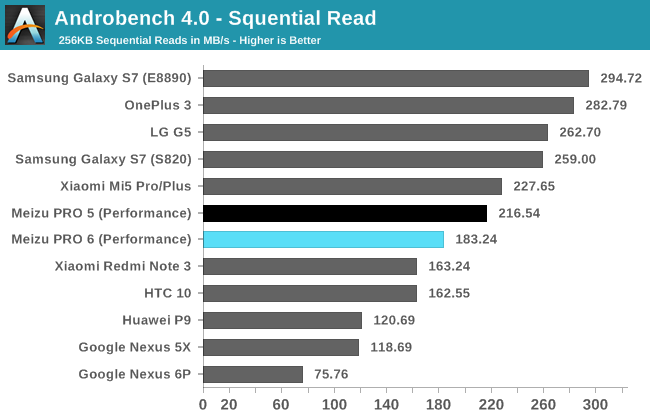 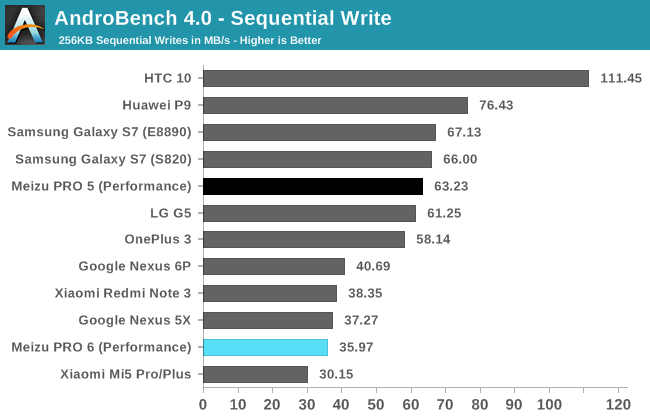 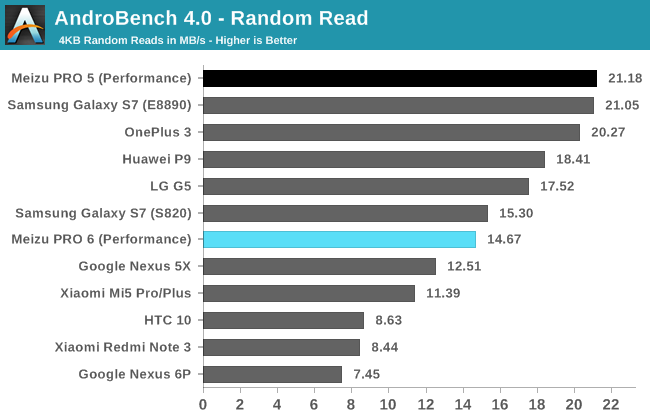 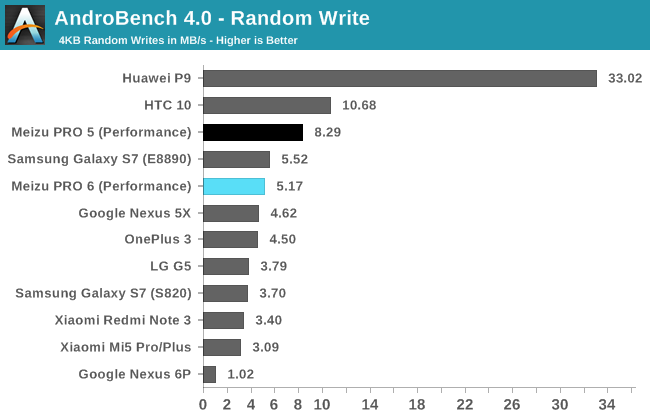 While Meizu’s PRO 5 uses the same KLUBG4G1BD-E0B1 NAND, controller, and UFS 2.0 interface as Samsung’s Galaxy S6 phones, the PRO 6 uses a different storage solution with an eMMC 5.1 interface. This does not hurt sequential read performance too much relative to the PRO 5, but it fails to keep up with Samsung’s Galaxy phones. Sequential write speed is not in the same class as most other flagships, however; the PRO 5 is 75% faster, for example. Random read and write speeds are respectable, but once again the PRO 6 fails to match the PRO 5’s performance. 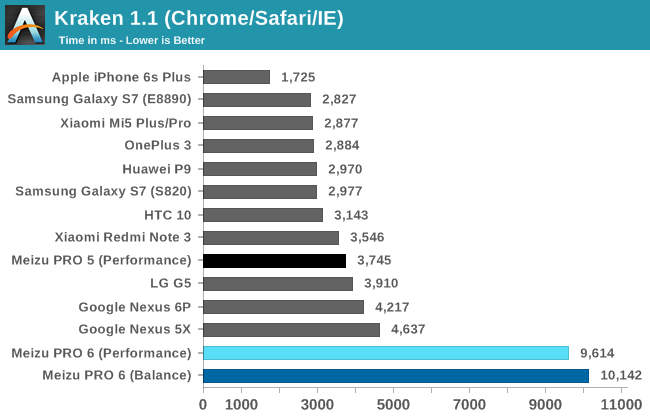 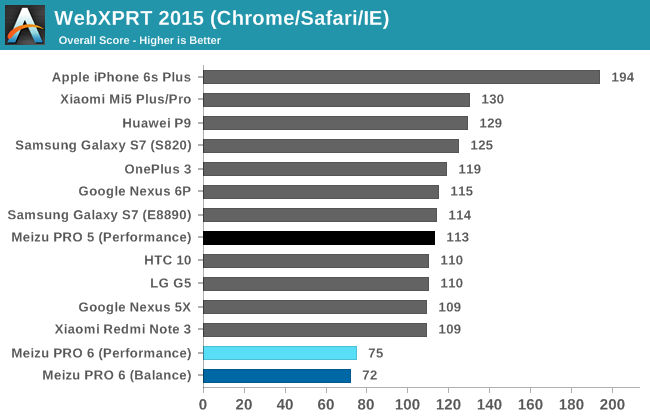 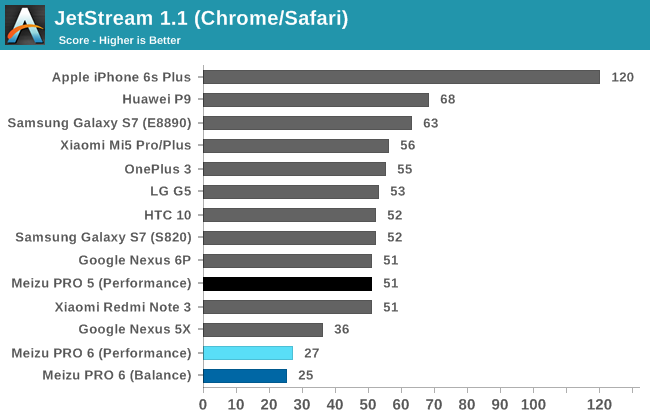 The PRO 6 performs extremely poorly in the browser-based JavaScript tests. Compared to the PRO 5 and the the Redmi Note 3’s two, lower-clocked A72 cores, the PRO 6 is about 2.5x slower in Kraken, 1.9x slower in JetStream, and 1.5x slower in WebXPRT 2015. There’s also less than a 10% difference between the PRO 6’s Performance and Balance modes. These results are not limited to just Google’s Chrome browser either. Meizu’s stock browser performs almost the same as Chrome, with results within ±9%.

Clearly something is wrong here, and the PRO 6’s deca-core CPU is the most likely culprit. Using the Linux kernel’s CPUFreq statistics with a sample period of about 200ms, we’re able to track the cumulative time each core spends at a given frequency with a reasonable degree of accuracy. While we were unable to peer into the PRO 6’s CPU run queue and determine exactly how many threads were scheduled on each core, the frequency measurements should still give us a good idea of what’s happening because the CPU governor generally is not going to keep a core online at a high frequency for very long if it does not have any work to do.

While running the Kraken and JetStream benchmarks using the PRO 6’s Performance mode, only two A53 cores running at 2.0GHz are online and doing work, which explains the poor results in these tests; however, the PRO 6 actually performs reasonably well in PCMark’s Web Browsing test. Using this same method reveals the PRO 6 generally prefers using two A53 cores at 2.0GHz for this workload too, but there are several stretches where it keeps two A53 cores from the first cluster at 1.5GHz, all four A53’s in the second cluster at 2.0GHz, and both A72 cores at 2.5GHz. Again this does not mean it’s actually using all six cores simultaneously, but this behavior clearly leads to better performance in this test.

The PRO 6 also underperforms in the PCMark Writing test. This workload is a bit more bursty, making core activity patterns harder to track, but the PRO 6 generally prefers keeping only one or two A53 cores active during this workload, with brief 2-3 second periods where it keeps six cores active at their max frequencies just like in the PCMark Web Browsing test. To see the effects of a more intense workload, I ran Basemark OS II’s multi-core CPU benchmark. While all ten CPU cores were online very briefly, the PRO 6 quickly settled into a stable state where it kept two A53 cores active at 1.5GHz and all four A53’s in the second cluster at 2.0GHz.

Unfortunately, Meizu’s use of the Helio X25 and its deca-core CPU does not translate into a better user experience. The UI at least remains responsive, whether flipping through home screens or cards in the recent apps menu. And despite the poor JavaScript performance, browser scrolling is also smooth with very few dropped frames. However, the PRO 6 is consistently slower than the PRO 5 when opening apps and running various workloads. Its performance generally lags behind other current flagship phones too, primarily because its higher-performing A72 cores remain offline most of the time. Yes, in MediaTek’s tri-cluster design the role of the A72 cluster is to only service short bursts of activity, but we’ve shown several cases where the A72s should be used to improve performance and are not.

Update 1/19/2017: After updating to Flyme OS 5.2.5.0G, the PRO 6 performs substantially better. The Kraken, WebXPRT 2015, and JetStream scores improve by about 2x-2.5x. Meizu apparently adjusted the load threshold value, allowing threads to migrate to the A72 cores more frequently for better performance.