Camera quality on mid-range smartphones has gotten much better during the past few years, but it hasn't advanced to the same degree that other aspects such as the display have, and so it still ends up being one of the weaker aspects of a non-flagship smartphone. In general, we're at the point where still image quality with ample lighting is more than acceptable even on phones that only cost $200, but the relatively small sensors and less advanced ISPs on mid-range phones tend to produce poor images in low light and less than stellar video quality.

In the case of the Moto G4 and G4 Plus, there's a different camera in each model. The Moto G4 is advertised as using a 13MP sensor, while the Moto G4 Plus uses a 16MP sensor with PDAF and laser autofocus as well. This can be useful when shooting in low light, as pretty much every PDAF implementation on a phone with the exception of the Galaxy S7 fails to work in low light, while laser AF continues to work well. One would think that the Moto G4 Plus simply uses a higher resolution sensor in the same line as the sensor used in the Moto G4, but the story is actually more complicated than that. I've arranged data on the cameras for the previous Moto G and this year's Moto G4 and G4 Plus in the chart below to give a more comprehensive picture of their respective camera systems.

My original assumption about the Moto G4 was that the G4 Plus simply shipped with a higher resolution sensor of the same size. However, further investigation has shown that this is definitely not the case. The normal Moto G4 ships with the same Sony IMX214 sensor as the 2015 Moto G, although one can hope that the improved ISP built into Snapdragon 617 will help to improve image quality. As for the G4 Plus, it actually uses an OmniVision sensor, and it's a lot larger than IMX214. In addition to being 16MP compared to 13MP on the G4, the increased sensor size means that those pixels are also larger, at 1.3µm compared to 1.12µm. This is a very interesting situation, because in all likelihood it means that the Moto G4 Plus will be much better at low light photography than the less expensive model, and that's not what I expected from a $50 price bump. 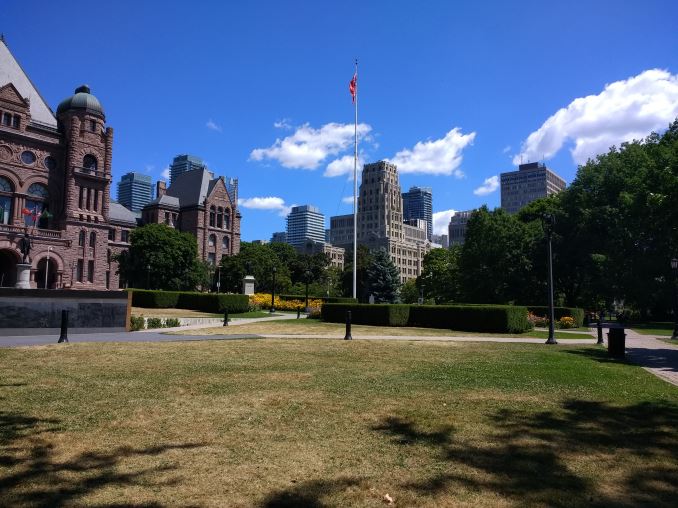 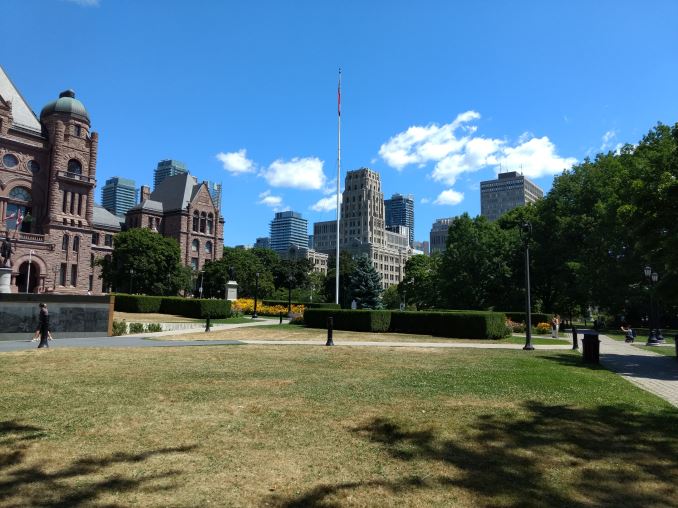 In this first scene both Moto G4 phones do a good job of retaining detail in the image. One can't really say that the G4 Plus has a noticeable advantage when it comes to sharpness. The one area that did stand out to me is the text on the base of the statue sitting to the left of the flag pole, which isn't legible at all on the Moto G4's image, but is in the image taken by the G4 Plus.

More noticeable than the small sharpness differences is the fact that the Moto G4 Plus pulled off a much more natural exposure than the G4. In the Moto G4 image it almost seems like the photo was taken on a cloudy day where the light from the sun was obstructed. In reality there were only a few clouds in the sky and the sun was shining down directly, and this is better reflected in the photo taken by the G4 Plus. 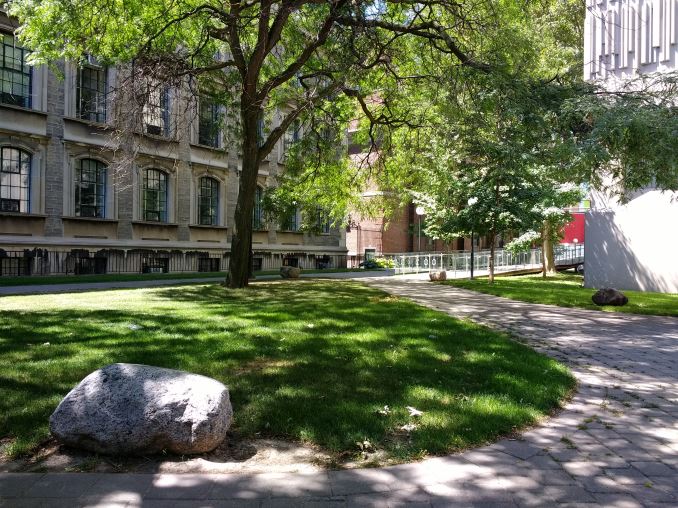 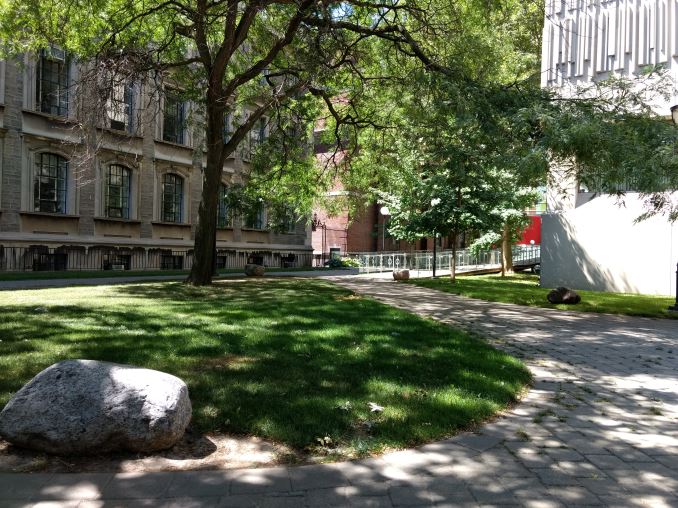 In my next outdoor scene there's shade provided by the trees, and many phones attempt to trigger their auto HDR, although I disabled it for the purposes of camera testing. The mixture of dark areas and highlights makes it a more difficult scene to get a good exposure than the previous one.

In this scene the Moto G4 and G4 Plus perform similarly. Much like the first scene, the exposure of the two shots is different. Given that both phones share the same ISP, I'm going to attribute this to either different processing being done for the different sensors, or different sensor attributes in general. In any case, both images are similar as far as detail, noise, and sharpness are concerned. The one thing I would note is that the G4 Plus does a better job of maintaining detail in the grassy patch.

One other interesting comparison is between the 2015 Moto G and the Moto G4, as they differ only in their image processors. It's clear when examining the images that the Moto G4 provides superior image quality, and this is especially obvious when looking at details like the tree branches and leaves. In the 2015 Moto G's image it's just a blurry mess of green and brown, while the Moto G4 actually resolves a good level of detail and allows you to see the thin individual branches and different leaves. 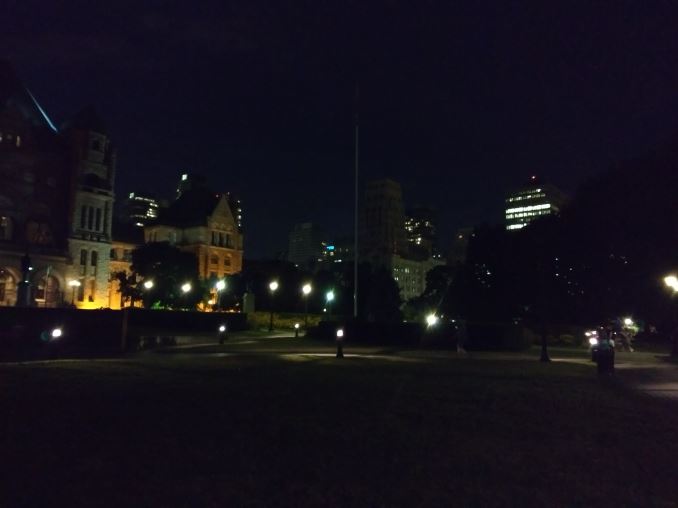 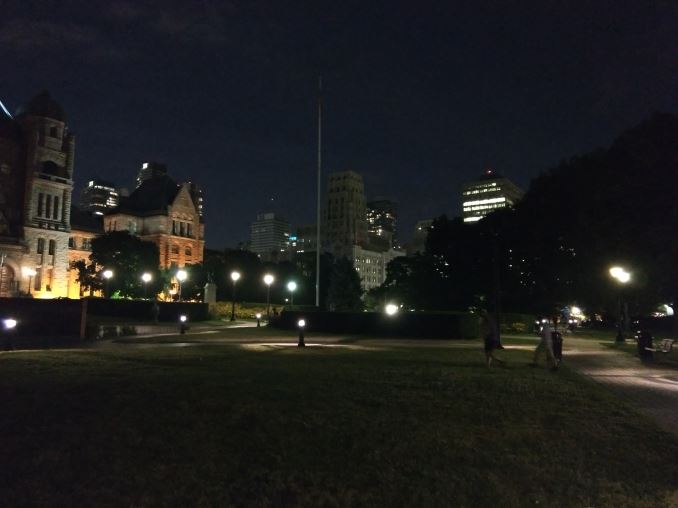 It's pretty clear from the photos above that the Moto G4 Plus is in a completely different class than the normal Moto G4. Looking back to the 2015 Moto G, it's hard to say whether the Moto G4 actually improves in its image quality. Snapdragon 617 provides a better featured ISP, but in the end it's still down to the quality of the sensor and the image processing algorithms to produce a good shot. In this case, the Moto G4 doesn't have the distracting color noise that made the 2015 Moto G basically unusable for low-light photos, but the tradeoff is that the photo is quite blurry and devoid of detail due to heavy noise reduction. In fact, because both phones can only manage similar levels of exposure, I would have to say that the 2015 Moto G actually did a better job here because it maintains a good level of detail and sharpness in the exposed areas despite the color noise.

As for the Moto G4 Plus. the difference can be seen instantly. The phone is able to show much more of the scene by virtue of its larger sensor capturing more light. You can see details on the right side of the frame and in the distance that are obscured on the normal Moto G4 due to its dark exposure. The level of detail and sharpness is also improved, and the photo is actually much better than what you'll get on Google's latest Nexus devices with the HDR+ mode disabled. 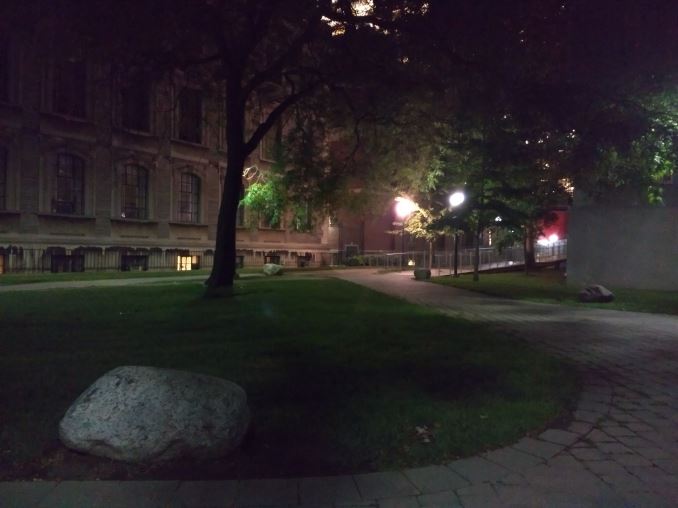 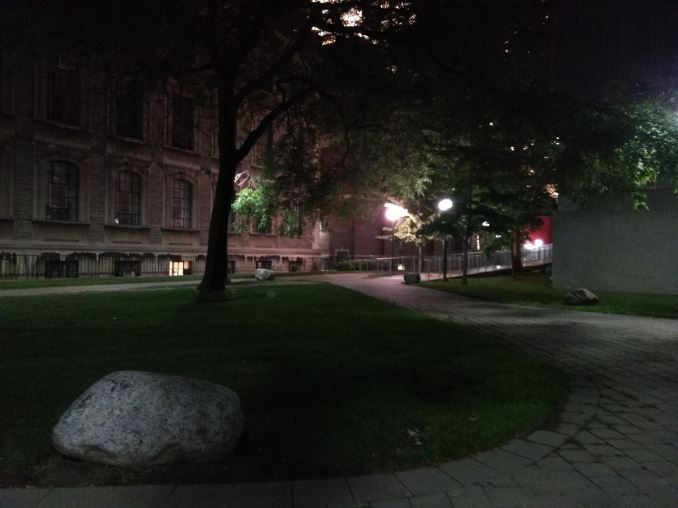 The Moto G4 suffers from the same blurry output in this next test as it did in the previous one. However, in this circumstance the brighter exposure of the images means that the color noise on the 2015 Moto G is much more distracting, and so I would probably opt for the Moto G4's image this time around. As for the Moto G4 Plus, there is an improvement over the normal Moto G4 but not to the same degree as the previous image as both phones manage a similar exposure in the scene. What is clear is that the Moto G4 Plus isn't using the same heavy noise reduction that smears away detail, leading to a slightly noisier but also much more detailed result.

Overall, I think the Moto G4 provides acceptable image quality for a $200 smartphone. IMX214 is definitely showing its age, although it's funny how Google's less-than-optimal image processing leaves the Nexus 6 with worse image quality despite having a much more powerful SoC and OIS paired with the same sensor. The Moto G4 does outperform the Huawei Honor 5X, which has been my general recommendation at this price point. As for the Moto G4 Plus, it has surprised me in how well it performs for a $250 smartphone. The low-light image quality is much better than any other $200-300 device that I've personally used, and I think it's definitely worth the $50 if you're a user who likes to take a lot of photos but is on a tighter budget for a smartphone.

Both the Moto G4 and G4 Plus can record 1080p video at 30fps. I've opted to do my test with the Moto G4 Plus, but in general there's not really any difference between the two. If you decided to do video recording at night the circumstances may change due the G4 Plus's larger sensor, but I don't think either phone is going to produce any sort of usable video at night.

The Moto G4's video quality is acceptable for a mid-range device, but there's nothing exceptional about it. Video is encoded using the H.264 High profile, with an average video bitrate of 17Mbps. It's good to see devices leaving behind the H.264 Baseline profile, which was used by several devices last year and is missing many features that can improve video quality at a given bitrate. The audio is a 96kb/s stereo track. In general, the video isn't too detailed, but Motorola does a good job of managing the exposure and maintaining a smooth frame rate, both of which have been issues on inexpensive smartphones in the past.