As our frequent readers know, DRAM prices depend on supply and demand. While demand for DRAM depends on makers of computers and consumer electronics, supply depends on output of memory manufacturers. All sides will always try to cut down their costs, which is why the manufacturers introduce new manufacturing technologies every 18 to 24 months (producing more ICs per silicon wafer) and continuously try to improve their yields (higher percentage of usable ICs per wafer).

Since smaller fabrication processes can increase the production of memory ICs without needing to expand the manufacturing fabs, DRAM IC output as a result increases significantly every couple of years. In a bid to slowdown such natural decrease of costs and prices, according to analysts, leading DRAM manufacturers intend to slowdown transitions to smaller process nodes. This sounds slightly counter intuitive, as any manufacturer with a smaller node will have the advantage over the competition (anyone interested in this should go look at Game Theory).

Market observers from DRAMeXchange point out that while new process technologies are getting more expensive to develop, and fabs are getting costlier to equip, manufacturers of memory are cutting their research and development spending. This comes about as a result of decreasing revenues, which will inherently slow down adoption of new process technologies and therefore slow down reductions of DRAM IC costs and prices. Avril Wu, research director at DRAMeXchange, believes that in 2016 the total DRAM bit output will slow down and we will only see an increase of 23.1% year-over-year, compared to a 30% to 50% increase typically seen.

According to Mr. Wu, this is going to happen because of the slow transition to 10 nm class process technologies, as well as insufficient yields at 20/21 nm at other manufacturers (a claim that cannot be verified). 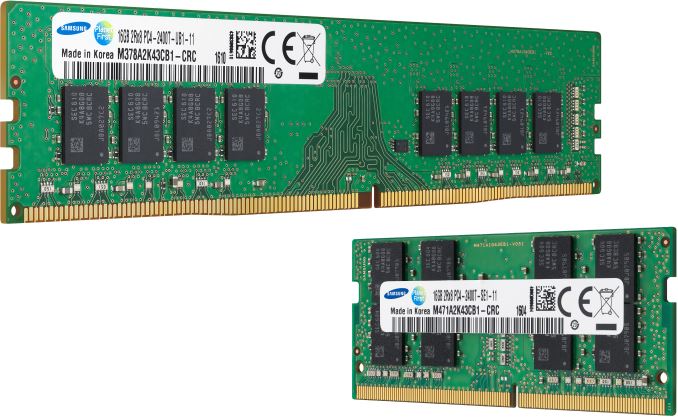 Samsung has already started mass production of DDR4-3200 ICs using its first-gen 10 nm-class fabrication technology (which some market observers call 18 nm) and plans to make LPDDR4 chips using the same process in the second half of the year. To stay competitive, Micron and SK Hynix will simply have to follow their rival with their 1x nm fabrication technologies. As a result, depending on yields, DRAM bit supply will increase, whereas DRAM prices will likely decrease if demand cannot catch up with supply.

18 nm and 16 nm process technologies will inevitably increase output of DRAM, but they are not the only factor that will affect production of computer memory in the coming years. Samsung’s giant manufacturing facility near Pyeongtaek, South Korea, will begin operations in 2017. The new fab is said to be two times larger than Samsung’s S1 plant in Giheung, South Korea, and is expected to accommodate up to five semiconductor production lines. The total cost of the initial fab required investment of 15.6 trillion won ($13.5 billion today) and in 2015 the company announced plans to expand it even further (by pouring in additional $8 to $9 billion). The fab will be used primarily for DRAM production, but Samsung could also use it to make other chips (i.e., NAND). We do not know exact production capacity of the new fab, but the S1 can process up to 170,000 wafers (300 mm wafers) per month and the addition of a fab twice as big will have a drastic effect on the DRAM supply. As a result, prices will be affected.

One predicition about DRAM supply gravitates around major purchasers of large about of ICs. One company gets mentioned a lot in this case: Apple. A good news story for DRAM makers in the short term should be that Apple is expected to release its next-generation iPhone in the second half of the year, and hence it will require a lot of memory (analysts predict that this will be LPDDR4). Quite naturally, manufacturers will have to shift production from PC DRAM to Mobile DRAM, which will lower supply of DDR3 and DDR4 amid increase of demand from PC makers in the second half of the year. As a result, memory makers will be able to sell more high-margin LPDDR4 memory (not only to Apple, of course) and either stabilize or even increase prices of mainstream memory.