The Qualcomm Snapdragon 820 SoC inside the Moto Z Droids has proven to be a popular choice for flagship phones this year. Its four custom 64-bit Kryo CPU cores and Adreno 530 GPU are at the heart of nearly every high-end phone currently available. We’ve already tested the performance and battery life of several of these phones, so we already have a good idea of what to expect from the Moto Zs. In this review then, we’ll limit our focus to only a few tests from our usual suite to see how Motorola’s implementation stacks up against its competitors. 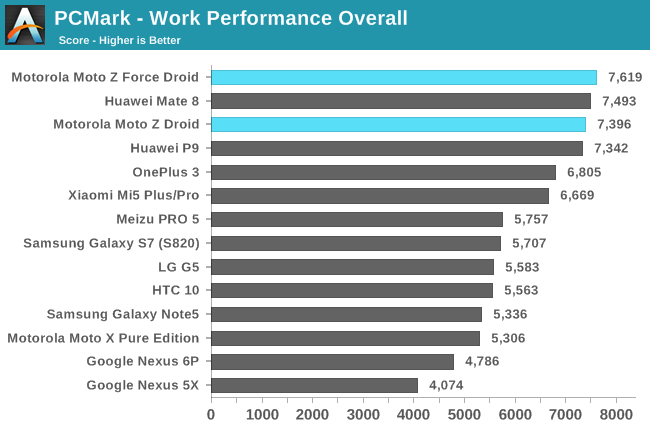 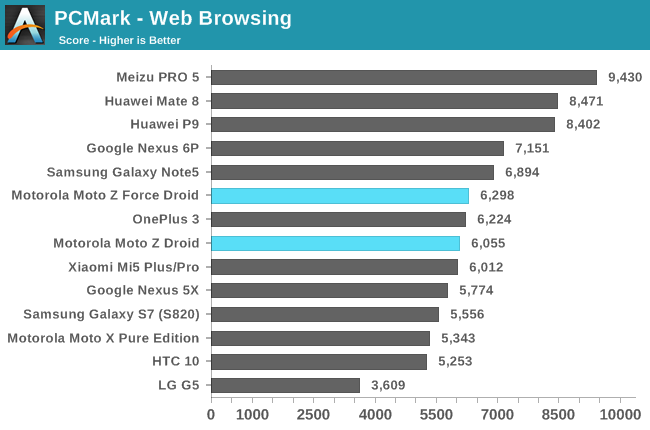 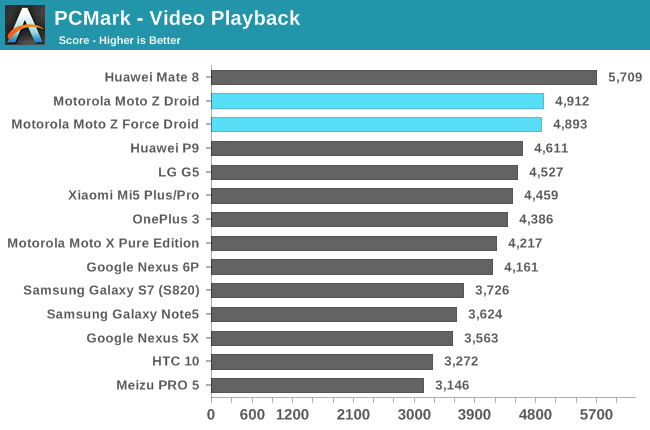 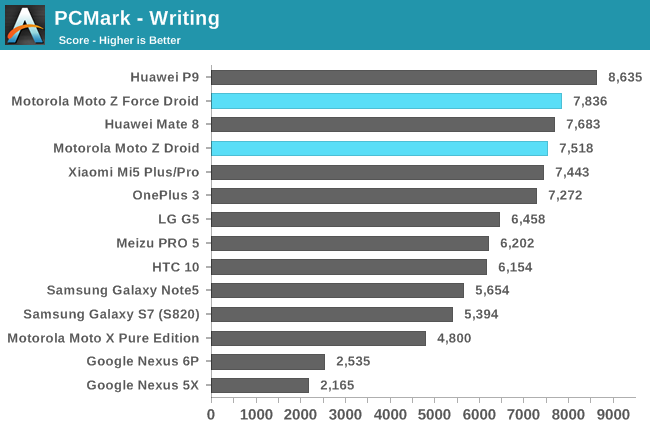 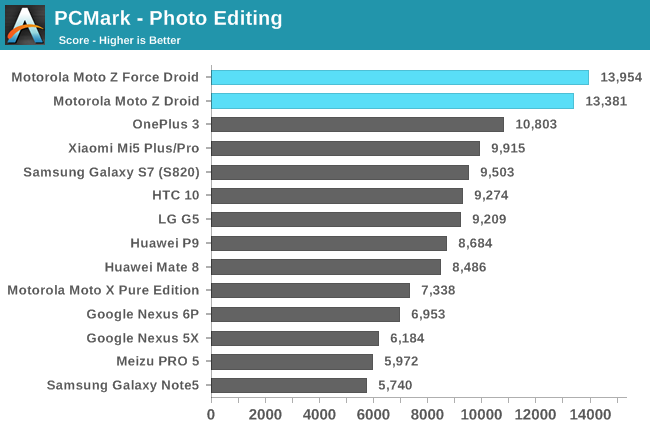 Because PCMark relies heavily on Android API calls to run real-world workloads that exercise the CPU, GPU, RAM, and NAND storage, it’s a good indicator of general system performance for apps we use everyday. Looking first at the overall score, the Moto Z Droid performs quite well, outperforming the other Snapdragon 820 phones and even the Kirin 950/955 in the Huawei Mate 8 and P9.

Diving a bit deeper reveals that most of the Droids’ advantage comes in the Photo Editing test that performs photo processing on the GPU (if supported). Snapdragon 820 generally does well in this test—it occupies all of the top positions in this chart—but the Droids are at least 24% faster than even the OnePlus 3 and 45% faster than the LG G5, which both use the same SoC. The Droids’ performance boost comes from an updated GPU driver.

The Moto Zs also do well in the Video Playback and Writing tests, again outperforming the other phones running Snapdragon 820, albeit by a much smaller margin. The phones using ARM’s Cortex-A57 and -A72 CPUs perform better than those using Qualcomm’s custom Kryo cores in the Web Browsing test, but the Droids are once again the fastest of the Snapdragon 820 group. 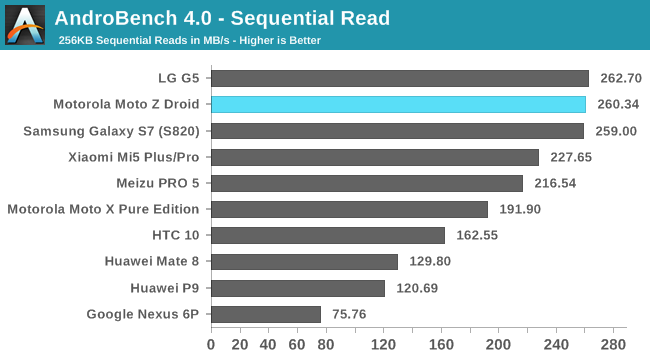 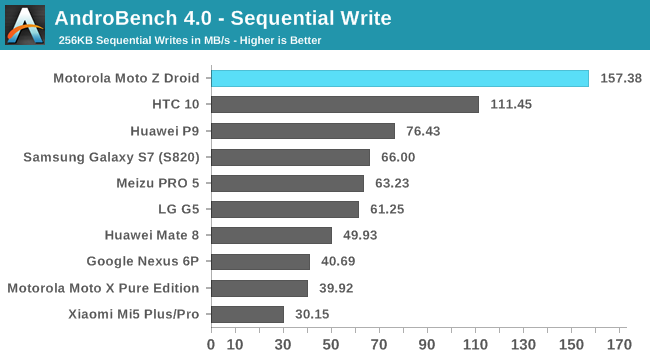 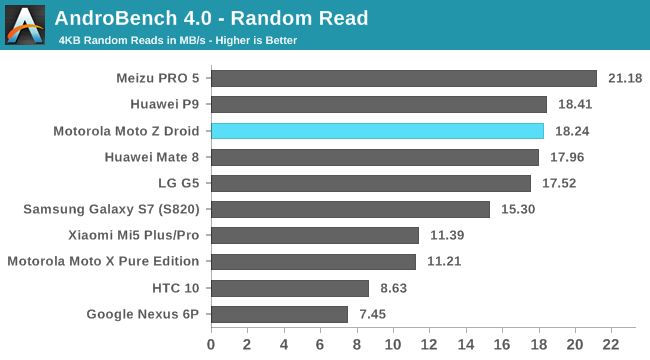 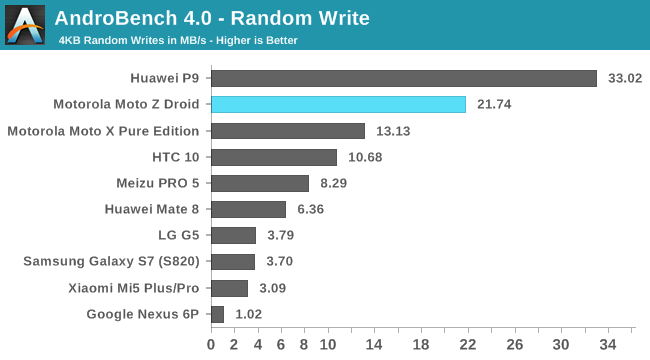 The Moto Z Droid and Moto Z Force Droid we tested are both using 32GB of Samsung KLUBG4G1CE-B0B1 UFS 2.0 NAND. This is the same NAND used by the Galaxy S7 (Snapdragon 820) we tested, so this alone cannot account for the difference in performance. It seems Motorola has done some software tuning to improve internal storage speed. 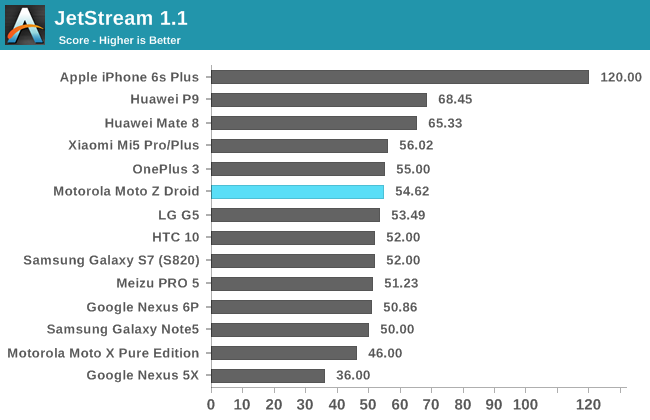 Similar to PCMark’s Web Browsing test, there’s a clear hierarchy in JetStream based on CPU architecture and frequency. The higher-clocked Cortex-A72 cores in Huawei’s P9 and Mate 8 give them a 25% and 20% advantage over the Moto Z Droids, respectively. All of the phones with Qualcomm’s Kryo cores clump together as expected, followed by the phones using the previous generation A57 cores. 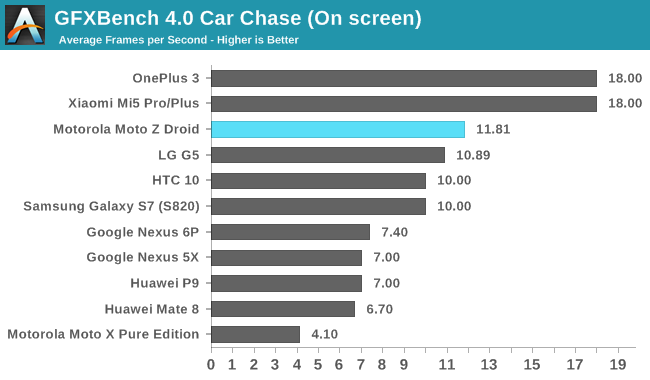 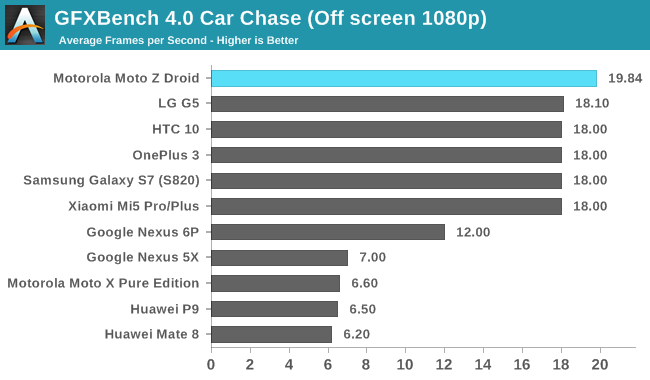 The Adreno 530 GPU in Qualcomm’s Snapdragon 820 performs well in GFXBench Car Chase, a game simulation that uses OpenGL ES 3.1 plus Android Extension Pack (AEP) features, including hardware tessellation. All of the phones with this GPU inside hit 18fps in the offscreen test except the Moto Z Droids, which see a 10% boost from their updated GPU driver. The OnePlus 3 and Xiaomi Mi5 pull ahead in the onscreen test because of their lower-resolution 1080p displays, but the Moto Z Droids still outperform the other QHD resolution phones. 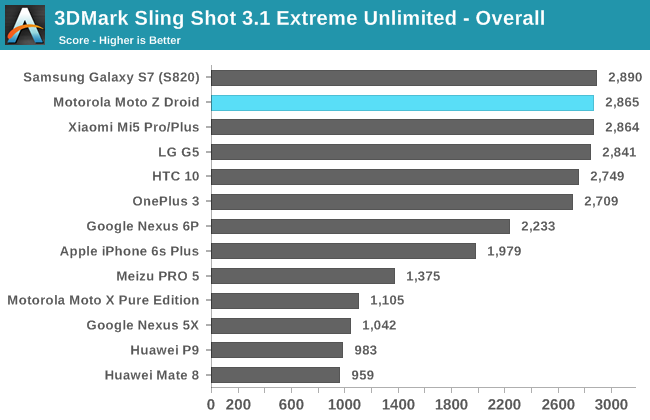 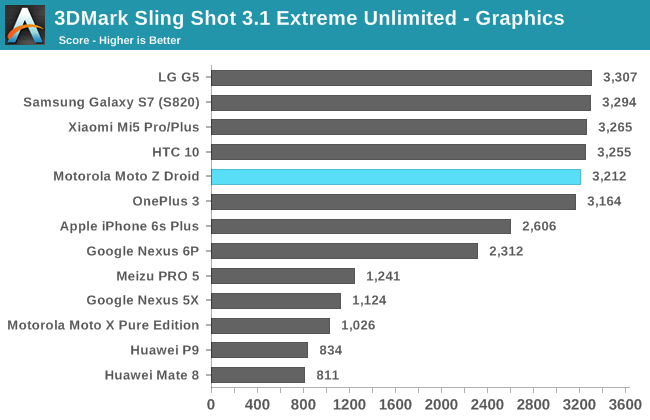 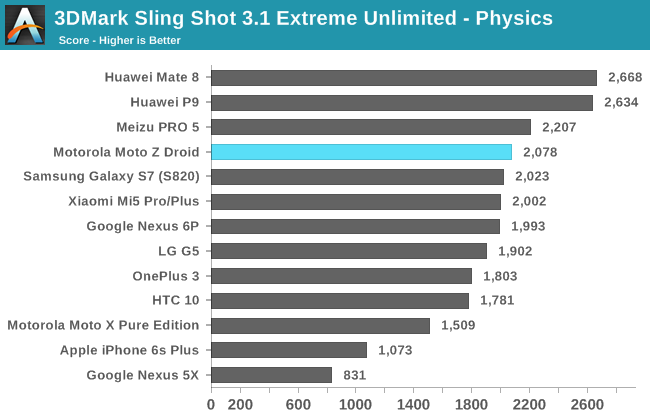 3DMark Sling Shot Extreme is another OpenGL ES 3.1 game simulation that renders offscreen at a higher 1440p resolution than our other tests and does not use hardware tessellation. Once again we see the phones using the Adreno 530 GPU perform well in the Graphics test. Interestingly, the Moto Z Droids see no uplift in performance here from their newer driver.

Both Moto Z Droids deliver excellent performance. Even though they share much of the same internal hardware with other current flagship phones, an updated GPU driver and other software tweaks give them a slight edge in most workloads. Internal storage performance is excellent, leading to quick app loads and installs. Poking around in the UI and scrolling in web pages seems just a little faster when compared to the Galaxy S7 edge, too.