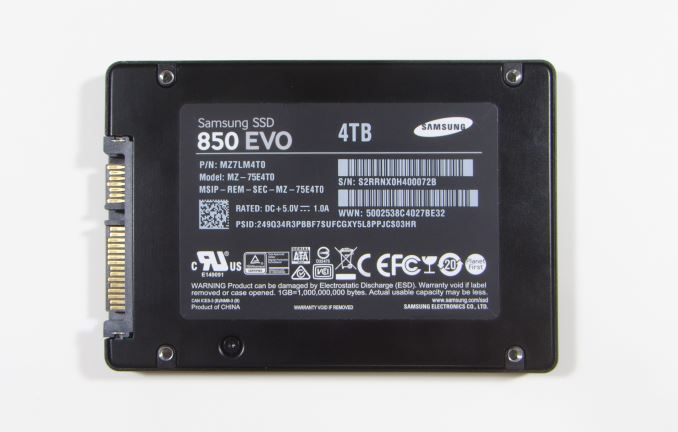 The 4TB Samsung 850 EVO set new highs for a few performance sub-tests, but ultimately the only important record it breaks is for its storage capacity. On that front it is without equal in the consumer market and even among enterprise SATA drives higher capacities are only available from drives that are more than 7mm thick.

Samsung's new 256Gb 48-layer V-NAND chips made it straightforward for them to create this product, but it doesn't quite seem necessary. We were already quite impressed with their 2TB drives, and they still don't face any serious competition. The 4TB 850 EVO is a stark illustration of Samsung's seemingly insurmountable lead in the marketplace, but it is far too expensive for any ordinary desktop or NAS use. There simply aren't many consumers who can afford this much SSD, but if you're a consumer with the budget for 4TB of SSD storage the 850 EVO can deliver it in a single 2.5" drive with none of the complexity of RAID. The drive may also be very welcome in the professional video space, but the relatively low write endurance rating of 300TB (75 total drive writes) could scare off those customers.

Putting aside the concerns about the suitability of this drive for today's market, it is a good sign for the future. Samsung is finally putting their new generation of 3D NAND on shelves in large quantities. As promised it doesn't seem to bring any new performance issues, but a SATA drive can't really prove that conclusively. The improvements to power efficiency are modest but real and every bit of that will be welcome as the 48-layer V-NAND finds its way into the rest of the product line. It is hard to tell whether the new V-NAND will be pushing prices much lower in the short term, but it looks like it will at least be competitive with what's already out there. Samsung is well positioned to continue their dominance for another round.

The 4TB 850 EVO also gives us another light push towards a future where mechanical hard drives are gone from the consumer market. Building a SSD that can entirely displace hard drives is now possible using controllers and DRAM that are cheap commodity parts. (SSDs larger than 4TB could be made using two controllers plus a RAID controller at the cost of some peak performance, a technique used by drives like the 2TB Mushkin Reactor TC.) The per-GB price of NAND flash is the only front on which SSDs still need to improve; SSDs have far surpassed mechanical hard drives in performance and power consumption and have caught up in terms of capacity and density.

The performance of the 4TB 850 EVO also makes it clear that there is even less need for a 4TB 850 Pro. An MLC counterpart simply isn't needed to reach the highest speeds that can be expected of a SATA drive, because 3D TLC drive done right and in such abundant capacity is plenty fast. The only reason Samsung should bother shipping a 4TB 850 Pro is if they're going to give it a vastly higher write endurance rating for a small price premium. Otherwise, they should save that new 3D MLC for the PCIe drives.