I don't think anyone would say that the move to SSDs in laptops was a step backward, but the transition meant computers that once included a 500GB or 1TB hard drive in the base model now come with a 128GB or perhaps a 256GB SSD. Meanwhile, the amount of data that users keep has continually increased as they take more photos, record more videos, and listen to more music. Streaming content has alleviated storage pressure to some extent, but in the end you simply have less local storage to work with nowadays than in the past.

macOS Sierra brings some new features to help users reduce storage pressure. Some of this has to do with leveraging the cloud for file storage, while other parts are designed to help with cleaning up things on a Mac that can be removed. It's no secret that computers running Windows and macOS both end up accumulating files that the user doesn't want and often doesn't even know exist. Unfortunately, it has never been easy to track all of these files down, which opened up a market for computer cleaner software that is sometimes less than reputable. In macOS Sierra there's now a central area for tracking what is taking up a lot of space on your Mac, along with controls and recommendations on how to free up space.

When you open the new storage management panel in Sierra you'll first see the screen that shows recommendations. Most of these are fairly standard, such as setting the trash to automatically empty itself, removing old mail attachments and iTunes movies, and using optimized photos instead of storing the original full resolution images on your device. There's also an option to reduce clutter by removing old documents stored on the Mac, which opens up a screen that additionally shows you some of the largest files on your Mac, which can be a great way to clear out the largest files that you don't need anymore. In fact, on my test device this feature found several temporary files related to the beta that were over a gigabyte in size each, and I definitely wouldn't have found them by just looking through Finder. 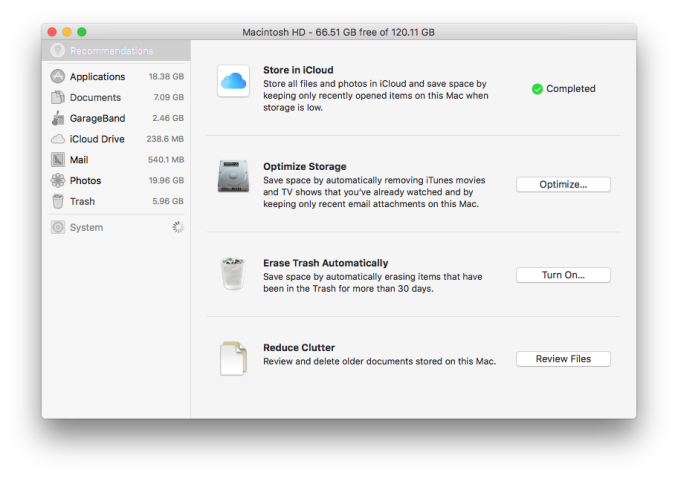 Among all the options to help reduce storage pressure, there's one that stands out. The new Store in iCloud feature claims to store all files and photos in iCloud and keeps only recently utilized files on your local drive. I'm not sure if "all files" is a bit of an exaggeration, but the list of things that it will move to the cloud is quite comprehensive, and it includes files like unused fonts, language packs, unused Mac App Store apps, and many other things that you would never have time to clean off your computer even if you never use them. Most important of all is that this does not count against your iCloud storage. The justification for this is likely that many of these things are actually parts of macOS that can be downloaded on demand, and even in the case of your own files it's not as if they're being synced across your devices so it's not using iCloud in the same way that file syncing does. This means that users who have kept the standard 5GB storage allotment don't need to worry about all the files from their computer suddenly filling up their iCloud Drive.

As someone who uses a 256GB iMac for iOS development, the new Store in iCloud feature in macOS Sierra interests me greatly. Even though I keep my media stored on a NAS, there are still times where there's storage pressure just due to files I'm currently working on and media that I've downloaded locally without having moved it to the NAS yet. At WWDC Apple stated that turning on all the storage optimization options in Sierra brought a 250GB Mac with 20GB free to 150GB free. While I doubt this is typical, and it certainly wasn't just due to moving data to iCloud, even a few extra gigabytes here and there would go a long way to help Mac users with smaller SSDs.

A feature separate from optimized storage is iCloud Desktop and Documents. This feature does utilize your iCloud storage, but it also provides a very useful way of syncing files across all your macOS and iOS devices. With this feature enabled all files and folders that are within the Desktop and Documents folders on your Macs will be synced across iCloud. This means that every Mac you use will have the same desktop, and all of your documents. On iOS these can be accessed via the iCloud Drive app, and assuming the format is something that can be handled by a system-level or third-party iOS app you'll be able to open it there as well. 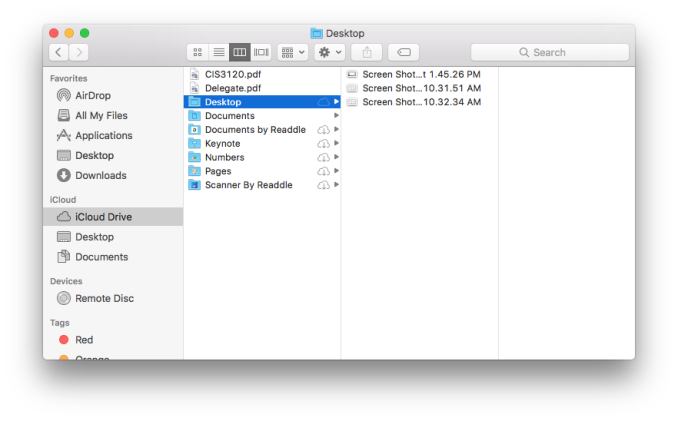 One apparent oversight with iCloud desktop and document syncing is the ability to have a limit on the size of files that will sync. For example, I don't want large video files on my laptop that end up in documents or on the desktop to then be uploaded to iCloud and downloaded to my other Macs. My desktop computers don't store media locally at all because it's all streamed from a NAS, and the laptop only has local media content so it can be accessible when I'm not at home. It would be helpful if Apple provided mechanisms to exclude certain files or folders within the desktop and documents folders from iCloud syncing, as well as some setting that stopped files above a certain size from syncing to iCloud unless you explicitly tell it to.

I'm sure someone within Apple is already aware that this feature needs some configurable options, and by the time macOS Sierra releases later this year I'm sure there will be a solution in place. Beyond that there's not a whole lot else to say about the feature. I've been in a number of situations where I wished I could get at a file on the desktop of my home computer from my work computer, but without SSH or VNC set up there was no way to do so. Having things sync to the cloud on their own means that's never something you have to worry about again, and sometimes the best features are the ones that just give you a bit of peace of mind.