Luckily enough, there weren't too many layout issues to point out with the ABIT NF7-S.

We really weren't too keen on the positioning of the ATX (20-pin) connector on the ABIT NF7-S. Instead of being on the left-hand side of the motherboard, we would have preferred to have seen it located on the right-hand, upper portion of the motherboard. This is the best place to position an ATX connector, as the thick wires won't obstruct the installation/uninstallation of the CPU's heatsink. 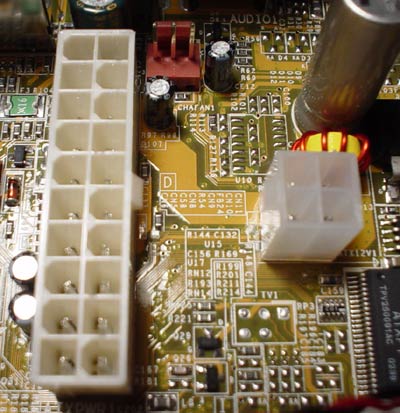 Oddly enough, the ABIT NF7-S had an AT12V connector located on its PCB. We've seen maybe two Athlon XP motherboards with an ATX12V connector in the past. We wonder what the purpose of this connector is for Socket A, considering AMD hasn't set any new guidelines as far as needing to implement ATX12V to feed enough juice to the CPU; though, as the Athlon ramps up, this may be inevitable.

One feature we felt ABIT shouldn't have missed was the four mounting holes around the CPU socket that are so vital to all those Swiftech and Alpha users and cooling fanatics in general. However, the official word from ABIT is that the NF7-S will indeed ship with four mounting holes even though our sample didn't have this feature. Admin and owner of Hexus.net, David Ross, was good enough to alert us to this fact. 12-10-02 UPDATE Apparently, the first few thousand NF7-S motherboards will ship without the mounting holes.

Too many motherboard makers like to place the DIMM connectors right next to the video card. Unfortunately, ABIT is one of those motherboard makers with the NF7-S. The DIMM connectors are basically impossible to unhinge unless you go through the hassle of unscrewing and then physically uninstalling your video card just to throw in a stick of memory. For those that are picky about memory and frequently like to install different types of modules, the DIMM connector's position will be an annoyance. However, this won't be an issue with video cards that are shorter in length than our ASUS GeForce4 Ti4600.

The USB and FireWire headers are positioned fairly well. There are two USB 2.0 headers located near the bottom of the NF7-S PCB, but not quite far enough to our liking. The way these USB headers are positioned makes it difficult if you decide to use the onboard Serial ATA connectors for a future SATA hard drive or something. Despite the small size of Serial ATA cables, USB bracket cables can still overlap them and this just causes a mess.