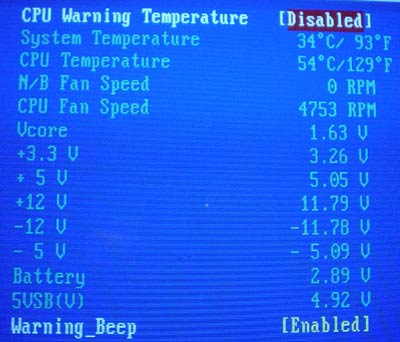 BIOS hardware monitoring can be found in the PC Health section. In general, we see a fair amount of readings, ranging from system and CPU temperature, North Bridge and CPU fan speed, Vcore, PSU readings (all rails), battery voltage, and options for enabling or disabling CPU Warning Temperature and Warning Beep. All in all this is a very basic PC Health section. Worthy of note is the available North Bridge fan speed reading that is present, despite the fact that the North Bridge is passively cooled. Therefore, you should have no trouble replacing the passive North Bridge heatsink for an active cooling solution in the future. 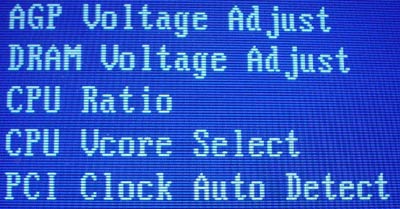 The FSB options top out at 200MHz (1MHz increments) in the K7N2-L BIOS unfortunately. We hope to see an updated BIOS with higher FSB adjustments in the future simply due to the fact that some overclockers will want to run their 400MHz FSB Athlon XP Bartons higher than their stock FSB setting. For example, a 250MHz setting would be nice to see in a future K7N2-L BIOS update. 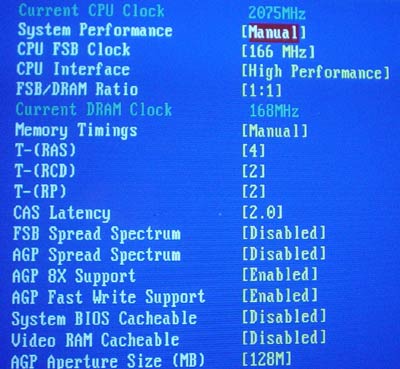 Voltage tweaking is made possible by the "Frequency/Voltage Control" section. In this section you'll find options for adjusting AGP up to 120MHz in 1MHz increments, VAGP, VDIMM, CPU multiplier, Vcore, and what appears to be a PCI lock control option (which we're not sure about yet).

There will be many users disappointed with the lack of flexible Vcore adjustment in this BIOS version. The max attainable Vcore via the K7N2-L BIOS is 1.80V, and what's even worse is that actual Thoroughbred-B Vcore fluctuates between 1.61-1.62V (instead of 1.65V). This means that consumers that planning on using their Palomino processors in the K7N2-L (and plan on doing some overclocking) will have to stay very near to the 1.75V spec of those CPU's. However, for Thoroughbred-A/B users, the actual attainable Vcore of 1.77V or so should be enough, though there will undoubtedly be some who won't be satisfied with 1.77V.

VDIMM adjustments weren't all that impressive either. You can "only" adjust VDIMM as high as 2.7V. Though having the potential to go any higher than 2.7V probably won't yield you a better memory overclock, it's still nice to have for some overclockers. We should remind you that running much higher than 2.8VDIMM is bad for the longevity of your memory.

We still haven't been able to get confirmation from MSI as to whether the K7N2-L locks the PCI bus at 33MHz. There is an AGP lock at 66MHz for this board (as with all nForce2 boards). We'll immediately update you with more information as we receive it from MSI. 12/04/02 UPDATE: MSI sends word that the K7N2-L indeed does not have a PCI bus lock at 33MHz, meaning you will overclock your PCI bus to a certain level at a certain overclocked FSB speed.

With this very common overclocking setup, we were able to hit 186MHz FSB, which was exactly what the ABIT NF7-S was able to achieve and 1MHz higher than the ASUS A7N8X. It's obvious that a good chunk of the nForce2 boards tested here today are limited to somewhere in the mid-180MHz FSB range, while only Epox's 8RDA+ and Chaintech's 7NJS are able to reliably operate at anything above that FSB range (190MHz and 194MHz respectively).

MSI includes some fairly limited multiplier options, ranging from just 7X to 13X in 0.5X increments. This will be a disadvantage to some power users, but should satisfy most overall. For our FSB tests, we lowered the multiplier to 8X. The MSI K7N2-L is yet another motherboard that is able to unlock factory locked Thoroughbred-B processors. Therefore, we were able to unlock our Athlon XP 2400+ with ease on the K7N2-L.