Update: OnePlus has since addressed the issues with calibration. Click here for my follow-up article.

One of the most disappointing aspects of the OnePlus 2 was its display. Like the OnePlus One it was a 5.5” IPS LCD display, but the similarities ended there. The OnePlus One shipped with a very well calibrated display, and at the time that wasn’t something you could always expect from devices priced around $300. With the OnePlus 2 the display got a much appreciated boost in peak brightness, but the color accuracy regressed severely. The display was heavily blue shifted, and to say that it tied the Nexus 6 as the most inaccurate display tested in recent years would actually be generous. With how good the display on the OnePlus One was, the OnePlus 2 was a huge letdown.

The OnePlus 3 is a chance for OnePlus to fix the mistakes they made with the OnePlus 2. Like the past two OnePlus flagship devices, we’re still talking about a 5.5” display. However, OnePlus has moved to an AMOLED panel. OnePlus calls this an Optic AMOLED display, although they don’t go into much detail on what that means, beyond claiming that the display uses “Custom-engineered gamma corrections that help create a more natural viewing experience”. It’s generally not a good sign when the description of a technology is very vague and just throws in some technical jargon instead of quantifying and explaining what is actually going on. OnePlus also claims that the display “produces colors that are more vivid and true-to-life than other AMOLED displays”, which sounds like good news given how accurate the AMOLED displays on other smartphones already are. 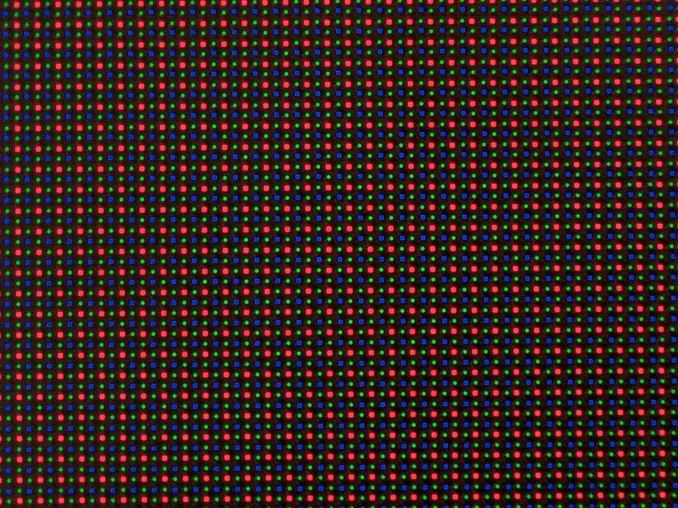 Before covering display accuracy, I want to comment on OnePlus's use of a 1080p AMOLED panel. According to comments made by OnePlus, a 1080p display was chosen as it provides superior battery life, and because resolutions above 1080p are not useful outside of VR. I have to respectfully disagree with both points, especially because this is a PenTile AMOLED display. It has been well demonstrated that good battery life is achievable not just with 1440p AMOLED smartphones, but with 1440p LCD smartphones. While I do feel 1080p is a good resolution to choose for a 5.5" RGB LCD panel, it is simply not adequate for a PenTile AMOLED display.

When you consider the effective resolution of red and blue on the OnePlus 3, you're really dealing with a display that is roughly equivalent to the iPhone 6s in chroma resolution, except on a 5.5" display instead of a 4.7" one. The resolution for green is equivalent to a 1080p display, and subpixel rendering is what allows you to make the claim that it's still a 1080p display, but for everything except pure green your effective resolution is going to be lower. In addition to that, the uneven size and spacing of the subpixels, along with their diamond pattern, makes them less than optimal for rendering the latin alphabet which contains many vertical lines. This kind of screen door effect has long been noticed on PenTile displays, and for the most part the push for 1440p AMOLED panels has mitigated those complaints.

On the OnePlus 3 it's pretty obvious that text is rendered less clearly than the iPhone 6s, which has a pixel density of only 326ppi, well below that of flagship Android devices. With the OnePlus One and OnePlus 2 for comparison it's completely obvious that the OnePlus 3 has a lower effective resolution, with text exhibiting distracting artifacts, and solid patterns that are red, blue, or white having a crosshatch pattern that simply isn't visible on OnePlus's older smartphones. I completely agreed with OnePlus's choice of 1080p on their past smartphones, but saying that there's no benefit to going higher on a PenTile AMOLED display is simply false, and there's no getting around the fact that the OnePlus 3 has a lower effective resolution than its predecessors.

While OnePlus isn't off to a great start with their display resolution, there are many other aspects of a display that need to be considered beyond the number of pixels. To examine the OnePlus 3’s display I’ve run our standard display workflow on it. As always, measurements are performed with an i1Pro 2 spectroradiometer, with the exception of contrast which is done with an i1Display Pro colorimeter. Data is collected and managed with SpectraCal’s CalMAN 5 software. 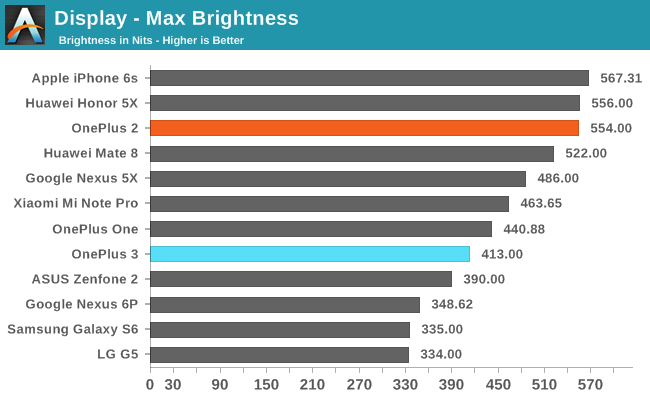 Right out of the gate things are not looking good for the OnePlus 3. Peak brightness only hits 413 nits, which is a huge regression from the OnePlus 2’s 554 nits. The impact that this has on outdoor usability is very significant, with the display being much harder to use in the sun than the OnePlus 2. To make matters worse, there’s no brightness boost mode that activates when you have the auto-brightness on. At this point I really don’t think it’s acceptable to ship a phone that can’t hit 500 nits when you’re in the sun, and Samsung is pushing 600 nits on their AMOLED displays when they boost brightness so OnePlus is well behind the competition.

Given that the OnePlus 3 uses an AMOLED display, you technically have infinite contrast when there’s no ambient light. In practice the OnePlus 3 definitely has better black levels than any LCD device that I own, but the OnePlus 2 still had a great static contrast ratio, and the better blacks weren’t worth sacrificing the 550 nit peak brightness at all. 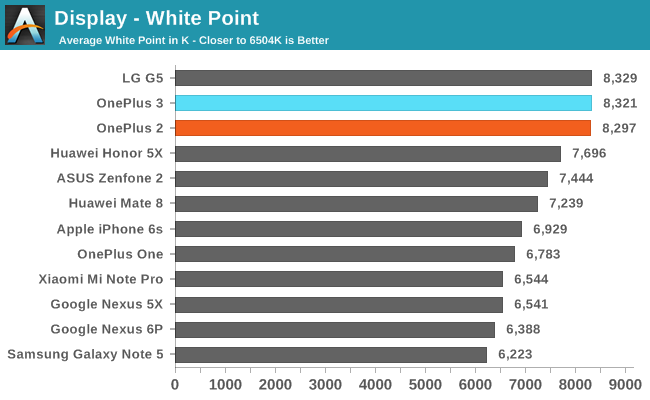 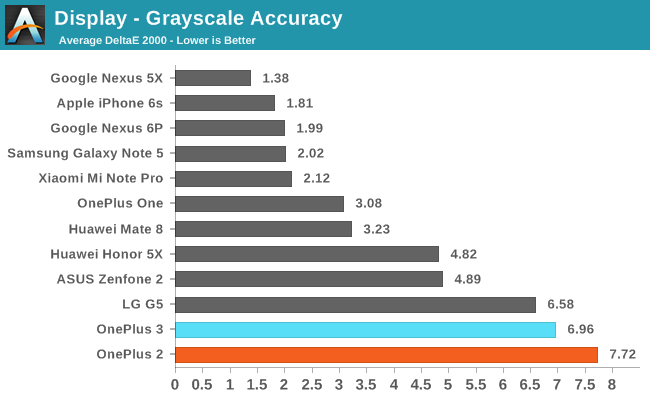 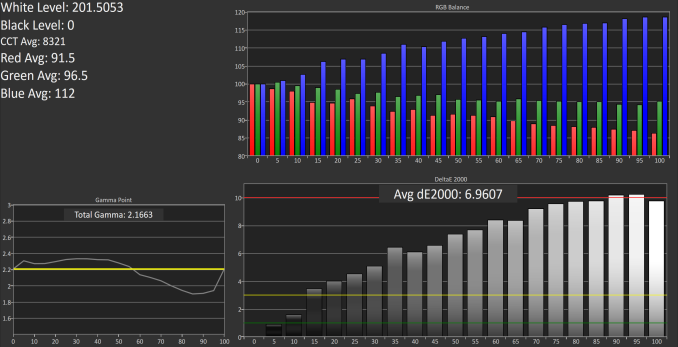 Greyscale accuracy on the OnePlus 3 is very poor. It’s not as bad as the OnePlus 2, but given how severe the errors are, it’s entirely possible that I just happened to get an exceptionally bad OnePlus 2 unit and an exceptionally good OnePlus 3. Whatever the case may be, the OnePlus 3 still has severe issues with greyscale rendition. Gamma is somewhat more accurate than the OnePlus 2 that I received, but the display has even more severe blue shifting, and it’s immediately apparent right from the very first setup screen when you turn on the phone. 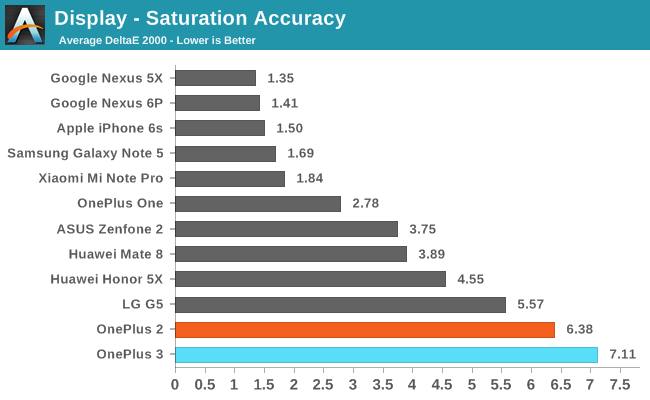 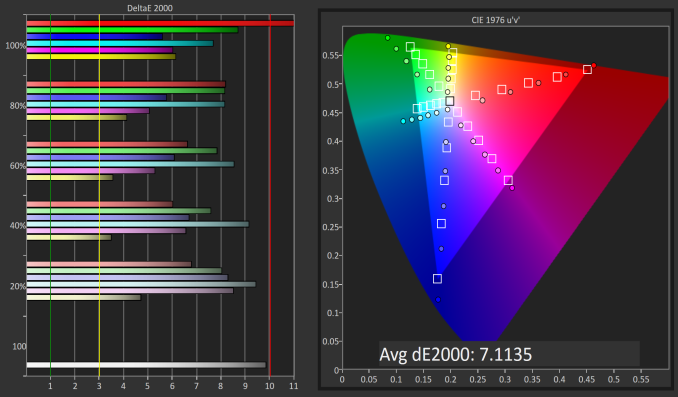 In the saturation sweep test, the OnePlus 3 performs even more poorly than the OnePlus 2. You can tell from the gamut that they’re actually targeting NTSC, which makes me feel like I’ve been sent back in a time machine to 2010 where this was the problem with AMOLED displays on smartphones like the Nexus One and the original Galaxy S. I really thought that we had moved past this, past the point where AMOLED phones would ship with nonsensical gamut targets that you can’t change, but clearly I was wrong.

What I really don’t understand is why the NTSC gamut was chosen as the target. With very old AMOLED phones this was chosen under the mistaken belief that NTSC was the correct gamut to use for displaying videos on smartphones, which was absolutely wrong. The gamut defined in the NTSC standard is over sixty years old, it was never even reproduced properly on the CRT displays of the time because they couldn’t do so with an adequate brightness level, and it was replaced as a “standard” gamut decades ago, basically not ever being used outside the Americas at all. When a smartphone targets Adobe RGB you can at least see the misguided but well-intentioned attempt to give a wider gamut using a color standard that actually is used in some cases, but when NTSC is the target it just shows a severe lack of understanding of modern displays and color standards. 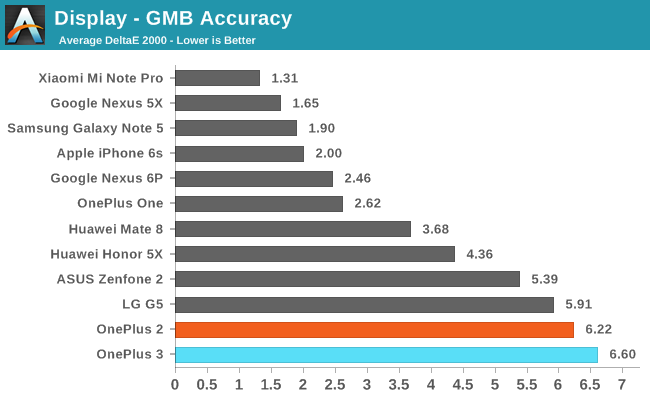 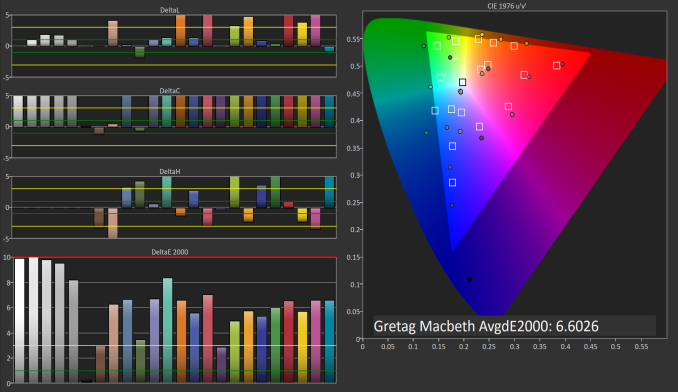 With poor greyscale and color reproduction, there’s absolutely no hope for proper color mixture rendition. As expected, the OnePlus 3 also regresses here, and beats the OnePlus 2 as the most inaccurate display on the chart. I really don’t have anything else to say here, as I’m just so frustrated by OnePlus’s choices here.

It’s evident that OnePlus didn’t learn from the issues I demonstrated with the OnePlus 2’s display. It was a serious regression from the OnePlus One, and with the OnePlus 3 they’ve somehow found a way to regress even further. Of all the aspects of a phone to mess up, the display is the absolute worst. There’s basically no use case where you use a phone without looking at the screen, and right from the very first moment I turned on the OnePlus 3 I could tell that the colors are completely wrong. It’s just a huge disappointment.

There is one glimmer of hope. After reaching out to OnePlus, explaining why the choice of the NTSC color space as a target doesn't make any sense, and showing the errors it causes with sRGB rendition, they told me that they now intend to offer an sRGB mode as an option in an upcoming OTA update. There's no firm timeline for this which makes me uneasy, and I can't make a recommendation based on an update that isn't guaranteed, but it's worth making note of. Unfortunately, I am unsure of whether or not this is something that can be fixed after the phone has already shipped. OnePlus has left the display extremely blue which is often indicative of little or no white point calibration, which would mean it's impossible to tune the phones because you don't even have an idea of what the panel characteristics are. For that reason, I remain hopeful but somewhat skeptical, and I plan to revisit the display of the OnePlus 3 if and when OnePlus adds this feature.

While an sRGB mode may be coming, right now the display accuracy you get on the OnePlus 3 reminds me a great deal of early AMOLED devices from 2010, and that's not a good thing at all. I really expected OnePlus to fix their mistakes from the OnePlus 2 because they did so with so many other aspects of the phone. The only explanation I can think of is that nobody actually understood the negative impact of shipping a wide gamut display on a non-color-managed operating system. This actually seems like the most likely explanation, as the choice of NTSC as the target gamut was definitely not an informed decision. Regardless of what path led to the OnePlus 3's current display, the end result is that the poor display calibration ruins the phone for me, because the screen is just unpleasant to look at. If display accuracy doesn’t matter at all to you it may be possible to overlook it, but for anyone who cares even the slightest bit the issues with the OnePlus 3’s display will be too severe to live with.