We normally run several tests to quantify battery life; however, because of some Flyme OS software issues, our PRO 5 battery testing was cut short. For the tests we were able to run, all of the devices were configured the same and each display was calibrated to 200 nits. 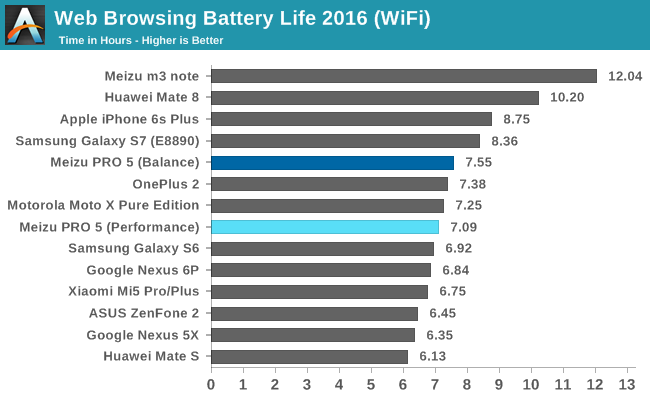 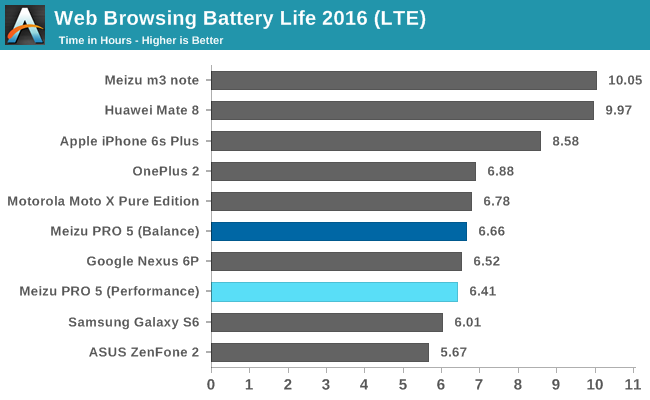 The PRO 5 lasts just over 7 hours in our Wi-Fi browsing test, which is an average result. The Mate 8’s significantly larger battery, 4000mAh versus 3050mAh for the PRO 5, helps it last over 10 hours by comparison, with an average platform power (APP) of 1.49W. The PRO 5’s APP is higher in both the Performance mode (1.63W) and Balance mode (1.54W). The Moto X Pure Edition, which also has a 5.7-inch display and similar size battery, lasts just a few minutes longer with a similar APP of 1.57W.

Switching to the cellular radio, the PRO 5’s result is again typical for a higher-end smartphone. Because the PRO 5 does not support the necessary US LTE frequency bands, it was using HSPA+ for this test. Comparing APP numbers again shows an interesting trend. While the APP for the Mate 8 and Moto X Pure Edition increases by only 2% and 7%, respectively, relative to the Wi-Fi test, The PRO 5’s APP increases by about 12%. The Galaxy S6, which also uses Samsung’s Shannon 333 baseband processor and RF components, sees its APP increase by 15%. This seems to imply that Samsung’s RF components are not as efficient as HiSilicon’s or Qualcomm’s parts; however, there are several variables in play here, and without more precise measurements and perfectly controlled test conditions, we cannot say for sure. 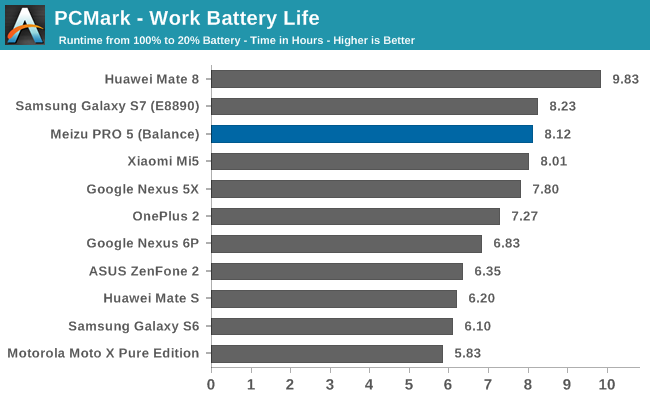 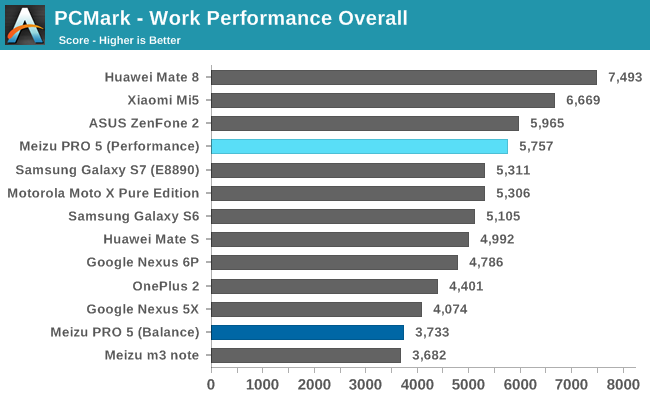 Unfortunately, we are unable to show PCMark battery life test results for the PRO 5 in Performance mode, because the DVFS bug that affects the PCMark test while running in this mode causes wildly erratic performance swings that invalidate the results. The test runs fine when using Balance mode, however, giving the PRO 5 just over 8 hours of runtime, similar to the Galaxy S7, Xiaomi Mi5, and Nexus 5X. But all three of these phones deliver substantially better performance than the PRO 5’s Balance mode in the Video Playback and Writing tests.

We also encountered a software issue that prevents us from running the GFXBench battery life and throttling test. Flyme OS 5.1 sets the phone’s battery status to charging whenever the screen is turned on even if the phone is not plugged in, which terminates the GFXBench test. Conversely, it reports the screen as being on when the phone is plugged in and charging even when the screen is off, which means the battery statistics shown in the battery section of the settings menu are wrong. 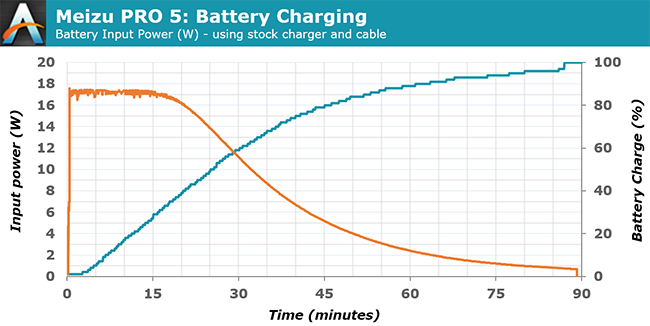 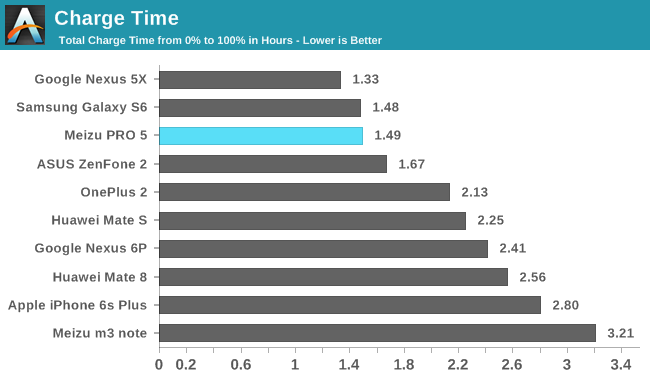 The PRO 5 supports Meizu’s mCharge 2.0 fast charging technology that incorporates Texas Instruments’ power metering solution. The included charger is rated for 5V, 9V, or 12V operation at 2A. This provides up to 24W (we measured closer to 25W) at the wall, which translates to a maximum 17.4W fast charge at the battery. If the battery gets too hot, the charger will step down to 18W at the wall. Turning the screen on disables fast charging to keep the phone from overheating, reducing power draw at the wall to the standard 10W, which translates to 6.2W at the battery.

The graph above shows the PRO 5 charging to 50% in just 20 minutes and reaching a full charge in 90 minutes, effectively matching the Galaxy S6’s charge time despite the S6’s smaller 2550mAh battery. The Nexus 5X charges its smaller 2700mAh battery in less time than the PRO 5, but the average charge rate is the same.

This second path is well-suited for audiophiles with high-end headphones, particularly those that use an open back design or have a high impedance. The es9018k2m SABRE32 DAC includes an integrated DSP and supports 16/24-bit audio from 44.1kHz to 192kHz. It also specifies a dynamic range of 127dB and low noise performance. The dual-channel OPA1612 also boasts low-noise output and uses independent circuitry to reduce channel crosstalk. Meizu provides options for adjusting gain to match the headphones being used, as seen in the screenshot below. 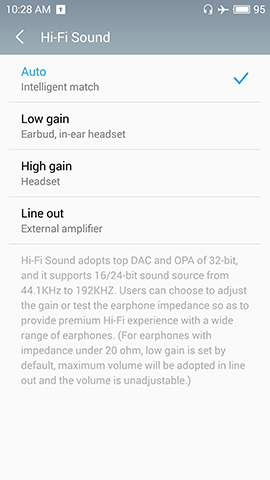 The headphone audio path is determined by which app is used for audio playback. Meizu includes a configuration file that lists which apps, such as Google Play Music, Spotify, and Meizu’s own audio player, get access to the Hi-Fi path. Audio players not on this list use the traditional path. This leads to an obvious question: Why include circuitry for two separate audio paths? Perhaps the biggest reason is power consumption. The higher current draw of the Hi-Fi path’s output stage helps it drive more demanding headphones, but will obviously consume more power. If you’re on the move and are just using some cheap earbuds, you can switch to the traditional audio path by using a different app and improve battery life. Choice is good but we would like to see a toggle added in the settings menu to select the path without having to switch apps.

After plugging in a pair of low-impedance NAD VISO HP50 headphones, I first listened to a selection of music using the traditional audio path. Overall sound quality is average for a smartphone and is good enough to satisfy less critical listeners; however, the iPhone 6s definitely sounds clearer, better able to render subtle details. With the PRO 5’s traditional path, instruments have a tendency to blend together and soft background sounds can get overpowered and lost.

Switching to the Hi-Fi path results in a completely different listening experience. Music sounds louder at the same volume setting and reaches a higher max volume thanks to the higher current output. Frequency response also improves: The extended range at lower frequencies gives music more low-end punch, similar to the iPhone 6s. The PRO 5 surpasses the iPhone, however, when it comes to clarity and channel separation. Instruments and voices remain distinct even at high volumes, and the PRO 5’s ability to render even the most subtle background sounds crisply and clearly is impressive. The iPhone has always been my go-to reference, and while several phones have been able to match its sound quality, Meizu’s PRO 5 is the first I’ve heard that beats it.

The PRO 5’s single external speaker is located on the bottom edge of the phone. Powered by an NXP TFA9890 class-D audio amplifier that delivers 3.6W (RMS) into 8Ω (1.0% THD+N) or 7.2W peak into 8Ω, the speaker gets plenty loud. The amplifier’s internal signal processing does a good job reducing clipping and distortion at high volume levels. It also protects the speaker by using a feedback loop to monitor temperature and excursion.

Like most downward-firing speakers, the PRO 5’s is very sensitive to what’s around it. Placing it on a table or cupping your hand around the speaker dramatically changes the volume level and sound that reaches your ears. Low-frequency response is predictably limited, with the bass track on “Solar Sailer” from the Tron soundtrack nearly inaudible, but bass notes a little further up the spectrum sound tight. The speaker places too much emphasis on midrange frequencies, elevating vocals above instruments. If you primarily rely on the external speaker for ringtones and speakerphone duties, then this will not be an issue, because it helps make voices sound clearer. It's not great for music, though, and making equalizer adjustments cannot overcome its shortcomings.