Like ARM’s associated Cortex-A73 announcement, today’s Mali-G71 revelations are being made ahead of actual silicon availability. To that end a lot of ARM’s projections are based on early prototyping of manufacturing process and architectural simulations, though at this late stage those simulations tend to be pretty close. 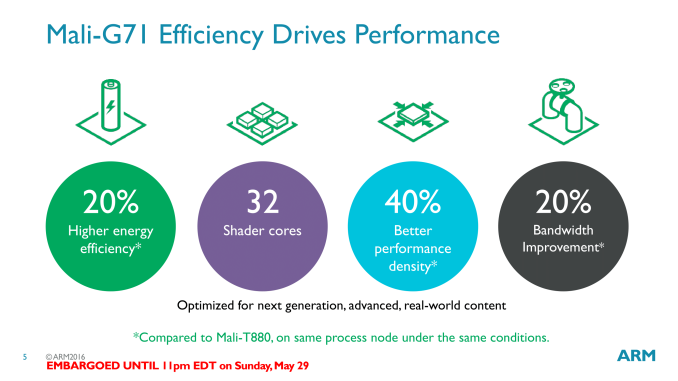 ARM’s official numbers for G71 call for it to offer significant improvements over a same-process Mali-T880 with respect to both energy efficiency and density. For the former ARM is expecting G71 to deliver 20% better energy efficiency over T880, and on the latter to offer 40% better performance density – or in other words, the same performance at 40% less die space. Though ARM has not been heavily penalized for area efficiency, the latter has been one of the few areas where they haven’t done quite as well, and is something competitor Qualcomm is keen to call them out on.

From a performance standpoint, ARM is expecting G71-based devices to offer around 1.5x the performance of current, T880 devices. This is a slightly fuzzier metric – it’s not 50% faster at the same MP configuration – but rather a combination of manufacturing improvements, a larger number of shader cores, and Bifrost architectural improvements. Andrei also suspects that if we were looking at apples-to-apples ISO-power/ISO-area numbers where everything was held equal, the actual performance gains would be even greater. 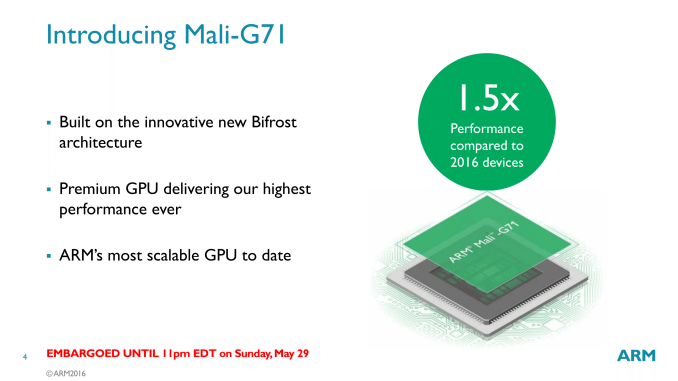 With all of that said, expect to see G71 operate a lot like a drop-in replacement for current Mali GPUs when it comes to graphics. Bifrost is an architectural update for Mali rather than a feature update. There are no major graphics features that G71 supports that T880 does not; both deliver on the same OpenGL ES and Vulkan graphics functionality. The heterogeneous compute functionality on the other hand stands to make a big impact for general compute tasks, just not for graphics.

Ultimately what this gets ARM is a chance to recalibrate their architecture for the future, to better align with both what software developers are writing and what device manufacturers need in their GPUs. Bifrost is the new modern Mali, and the shift to a TLP-centric design should serve ARM well in the future based on what we’ve seen similar shifts do for AMD and others. Meanwhile the overall performance gains will allow ARM and its customers to hedge their bets on things such as 4K phones and mobile VR, giving them a more suitable GPU design to use if those innovations prove popular. 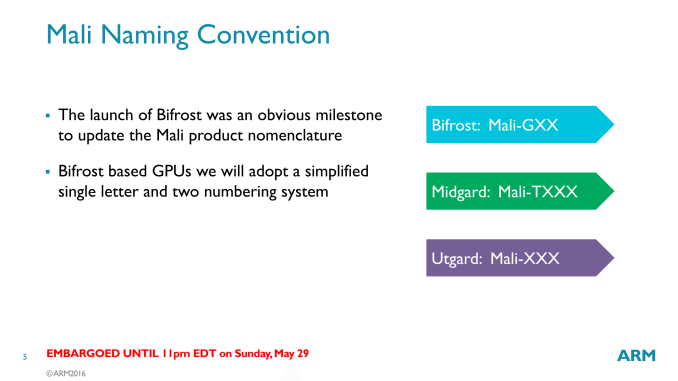 Wrapping things up, while ARM is only announcing the Mali-G71 today, the company has clearly left the door open to future GPU designs. As a high-end GPU design, G71 is the immediate successor to the T880, but I expect in time that ARM will want to produce GPU designs suitable to replace Mali T820 and the like. That ARM started at G71 is a good hint of what’s to come; future Bifrost GPUs will use the two digit G numbering scheme, so you can easily see where future GPUs may slot in.