Power consumption was tested on the system while in a single MSI GTX 770 Lightning configuration with a wall meter connected to the OCZ 1250W power supply. This power supply is Gold rated, and as I am in the UK on a 230-240 V supply, leads to ~75% efficiency > 50W, and 90%+ efficiency at 250W, suitable for both idle and multi-GPU loading. This method of power reading allows us to compare both the power management of the BIOS and the board's ability to supply components with power under load, and includes typical PSU losses due to efficiency. 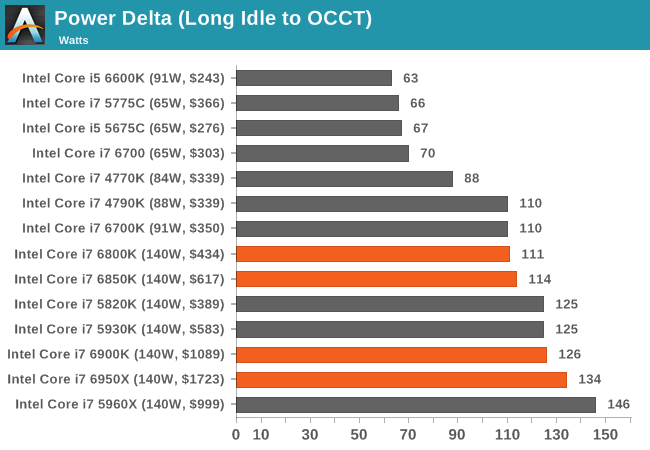 Each of the Broadwell-E SKUs are rated at 140W, however they vary between 6 cores and 10 cores and with different frequencies.  Normally one would assume that the core/frequency ratio would be adjusted to match TDP, but ultimately using more cores can consume more power. We see a distinct increase in power consumption moving up the product stack.

For this review, we also looked into peak delta power draw when varying the number of cores using Prime95’s mode for peak power consumption. Prime95 identifies cores with multiple threads and adjusts its loading/pinning accordingly. 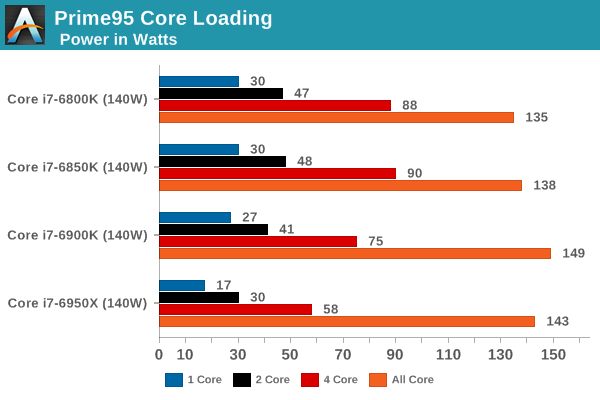 Our standard overclocking methodology is as follows. We select the automatic overclock options and test for stability with PovRay and OCCT to simulate high-end workloads. These stability tests aim to catch any immediate issues with memory or CPU errors.

For manual overclocks, based on the information gathered from previous testing, we start off at a nominal voltage and CPU multiplier, and the multiplier is increased until the stability tests are failed. The CPU voltage is increased gradually until the stability tests are passed, and the process repeated until the motherboard reduces the multiplier automatically (due to safety protocols) or the CPU temperature reaches a stupidly high level (100ºC+). Our test bed is not in a case, which should push overclocks higher with fresher (cooler) air. 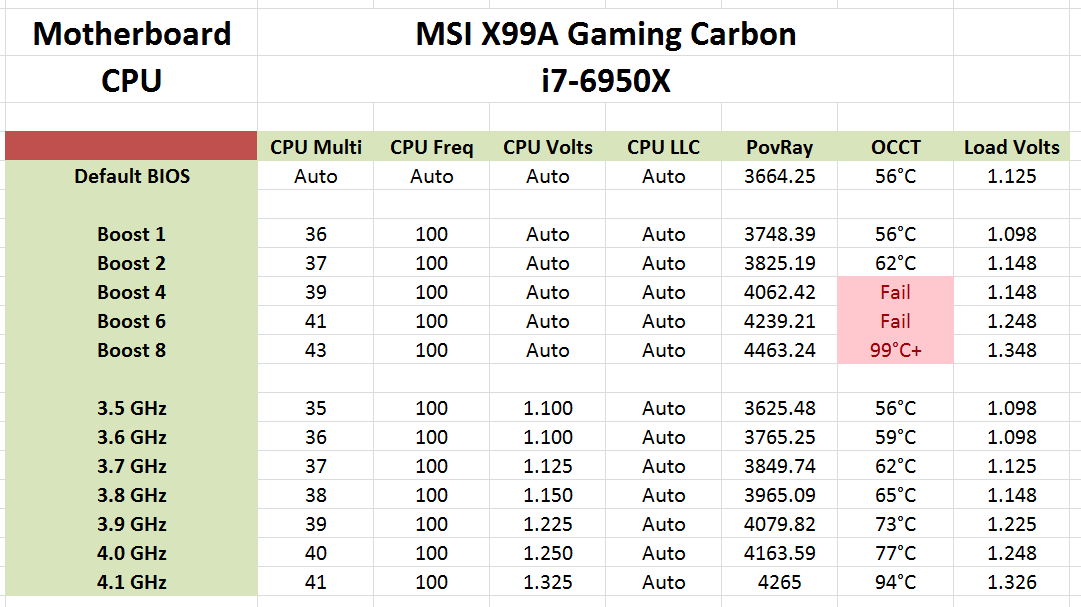 Due to time constraints we were only able to overclock the i7-6950X using the MSI X99A Gaming Carbon motherboard. MSI has improved its overclocking options as of late on the Z170 platform to make it easier to use, but our BIOS did not have those most recent updates, particularly for load line calibration. However, our sample hit 4.1 GHz at 1.30 volts before the OCCT load temperatures were prohibitive to move up any further. We saw similar things when testing the mainstream Broadwell parts with Iris Pro, which shows that this sort of overclocking performance might be indicative of the silicon itself.

That being said, speaking with our contacts at various motherboard manufacturers, we're told that 4.1 GHz is a reasonably average processor result for Broadwell-E. Some processors will hit 4.3 GHz on air at around the same voltage, whereas others need up to 1.4 volts, and thus results will depend on the cooling setup used or the thermal characteristics of the silicon. I have also been told that AVX is a different story: for any peak frequency attained normally, AVX overclock stable frequencies will be around 200-300 MHz lower.