Though we’ve covered bits and pieces of synthetic performance when discussing aspects of the Pascal architecture, before we move on to power testing I want to take a deeper look at synthetic performance. Based on what we know about the Pascal architecture we should have a good idea of what to expect, but these tests none the less serve as a canary for any architectural changes we may have missed. 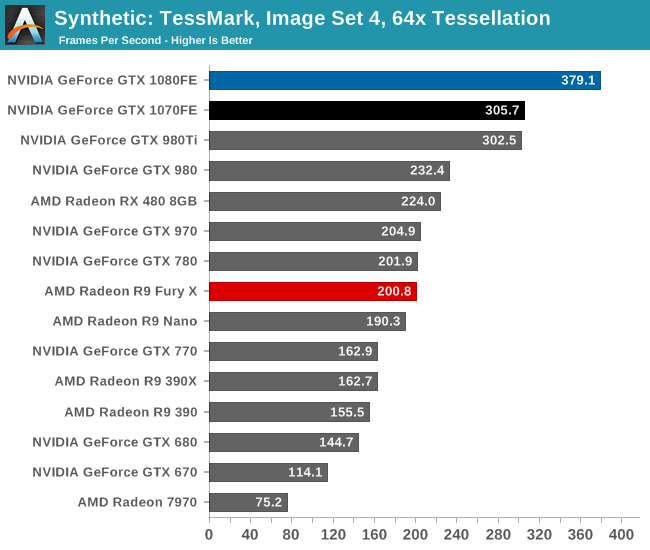 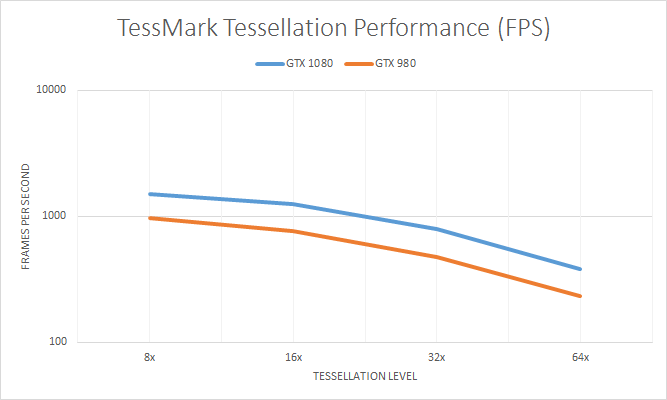 Breaking down performance by tessellation level to look at the GTX 980 and GTX 1080 more closely on a logarithmic scale, what we find is that there’s a rather consistent advantage for the GTX 1080 at all tessellation levels. Even 8x tessellation is still 56% faster. This indicates that NVIDIA hasn’t made any fundamental changes to their geometry hardware (PolyMorph Engines) between Maxwell 2 and Pascal. Everything has simply been scaled up in clockspeed and scaled out in the total number of engines. Though I will note that the performance gains are less than the theoretical maximum, so we're not seeing perfect scaling by any means. 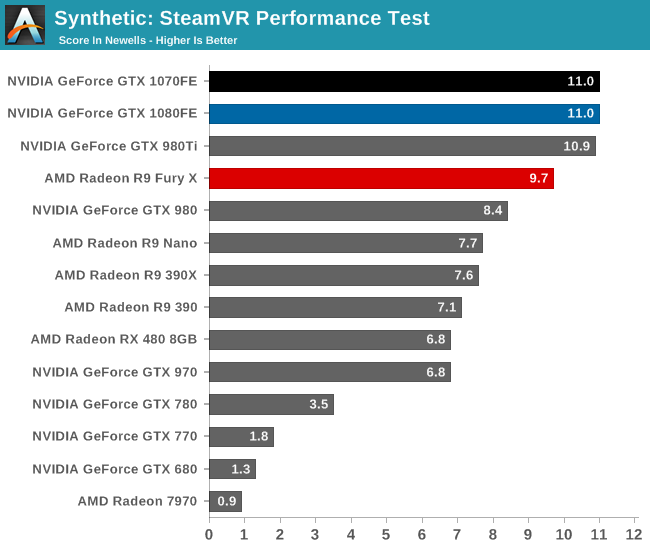 With the minimum recommended GTX 970 and Radeon R9 290 cards get in the mid-to-high 6 range, NVIDIA’s new Pascal cards max out the score at 11. Which for the purposes of this test means that both cards exceed Valve’s recommended specifications, making them capable of running Valve’s VR software at maximum quality with no performance issues.

Finally, for looking at texel and pixel fillrate, for 2016 we have switched from the rather old 3DMark Vantage to the Beyond3D Test Suite. This test offers a slew of additional tests – many of which use behind the scenes or in our earlier architectural analysis – but for now we’ll stick to simple pixel and texel fillrates. 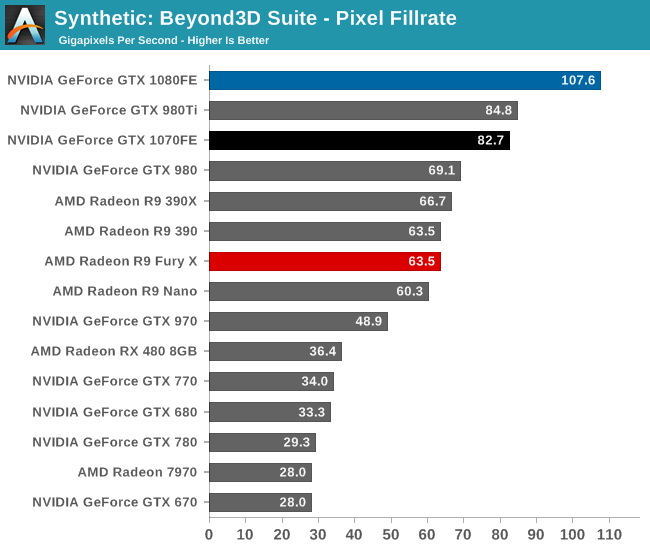 Starting with pixel fillrate, the GTX 1080 is well in the lead. While at 64 ROPs GP104 has fewer ROPs than the GM200 based GTX 980 Ti, it more than makes up for the difference with significantly higher clockspeeds. Similarly, when it comes to feeding those ROPs, GP104’s narrower memory bus is more than offset with the use of 10Gbps GDDR5X. But even then the two should be closer than this on paper, so the GTX 1080 is exceeding expectations.

As we discovered in 2014 with Maxwell 2, NVIDIA’s Delta Color Compression technology has a huge impact on pixel fillrate testing. So most likely what we’re seeing here is Pascal’s 4th generation DCC in action, helping GTX 1080 further compress its buffers and squeeze more performance out of the ROPs.

Though with that in mind, it’s interesting to note that even with an additional generation of DCC, this really only helps NVIDIA keep pace. The actual performance gains here versus GTX 980 are 56%, not too far removed from the gains we see in games and well below the theoretical difference in FLOPs. So despite the increase in pixel throughput due to architectural efficiency, it’s really only enough to help keep up with the other areas of the more powerful Pascal GPU.

As for GTX 1070, things are a bit different. The card has all of the ROPs of GTX 1080 and 80% of the memory bandwidth, however what it doesn’t have is GP104’s 4th GPC. Home of the Raster Engine responsible for rasterization, GTX 1070 can only setup 48 pixels/clock to begin with, despite the fact that the ROPs can accept 64 pixels. As a result it takes a significant hit here, delivering 77% of GTX 1080’s pixel throughput. With all of that said, the fact that in-game performance is closer than this is a reminder to the fact that while pixel throughput is an important part of game performance, it’s often not the bottleneck. 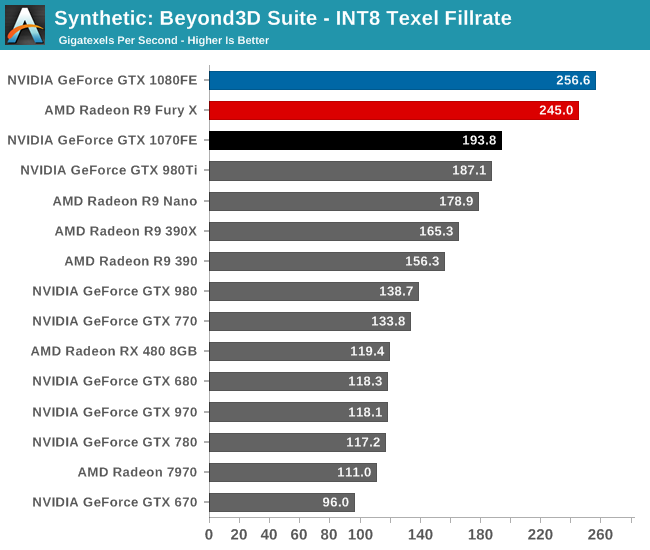 As for INT8 texel fillrates, the results are much more straightforward. GTX 1080’s improvement over GTX 980 in texel throughput almost perfectly matches the theoretical improvement we’d expect based on the specifications (if not slightly exceeding it), delivering an 85% boost. As a result it’s now the top card in our charts for texel throughput, dethroning the still-potent Fury X. Meanwhile GTX 1070 backs off a bit from these gains, as we’d expect, as a consequence of having only three-quarters the number of texture units.