Overall, we’re not expecting a significant difference in compute performance compared to Maxwell 2 for standard compute benchmarks. The fundamental architecture hasn’t changed – the CUDA cores, register files, and caches still behave as before - so there’s little reason for compute performance to shift. GP104 for all intents and purposes should perform like a higher clocked and slightly wider Maxwell 2, similar to what we’ve seen in most games.

However in the long run there is potential for Pascal to show some improvements. The architecture’s improved scheduling features are geared in part towards HPC users, and instruction level preemption means that compute kernels can now be a lot more aggressive on consumer systems since they can be paused so easily. That said, to really leverage any of these improvements, applications utilizing GPU compute need to have work that benefits from better scheduling and be written with Pascal in mind, and for consumer workloads the latter is likely a long way off. 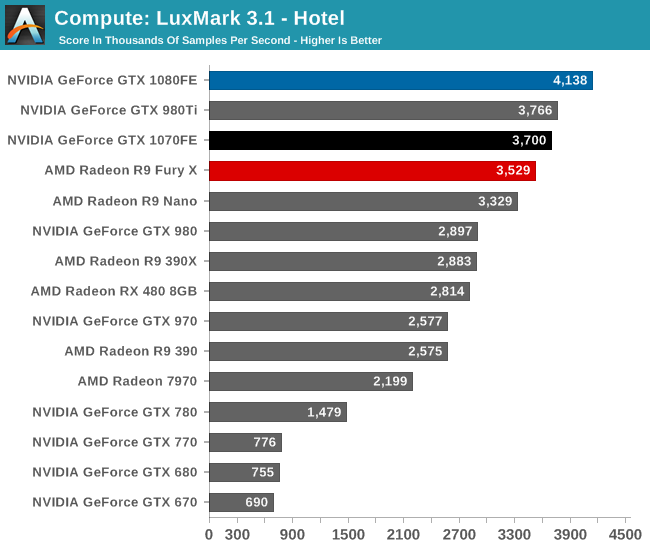 As with games, when it comes to LuxMark, the GTX 1080 is uncontested; this is the first high performance FinFET GPU in action. That said, I’m surprised by how close some of these results cluster. Though GTX 1080 is not a full generational replacement for GTX 980 Ti, normally it outperforms the Big Maxwell card by more than this. Instead we’re looking at a lead of just 10%, notably less than a simple extrapolation of CUDA core counts and frequencies would tell us to expect (GTX 1080 has almost 50% more FLOPs).

That said, GTX 1070 still places very close to GTX 980 Ti – albeit below it – so what we’re seeing isn’t just Pascal being a laggard. Especially since as a consequence of this, GTX 1080 only beats GTX 1070 by 12%. In any case, this may be a case of early drivers, particularly as OpenCL has not been an NVIDIA priority for the last couple of years. Alternatively, as strange as it may be, I’m not ready to rule out LuxMark being CPU limited. It’s something that we’ll have to keep an eye on. 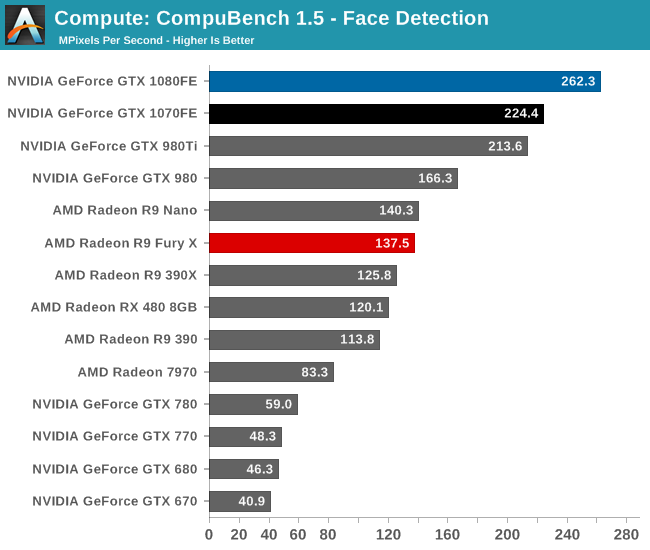 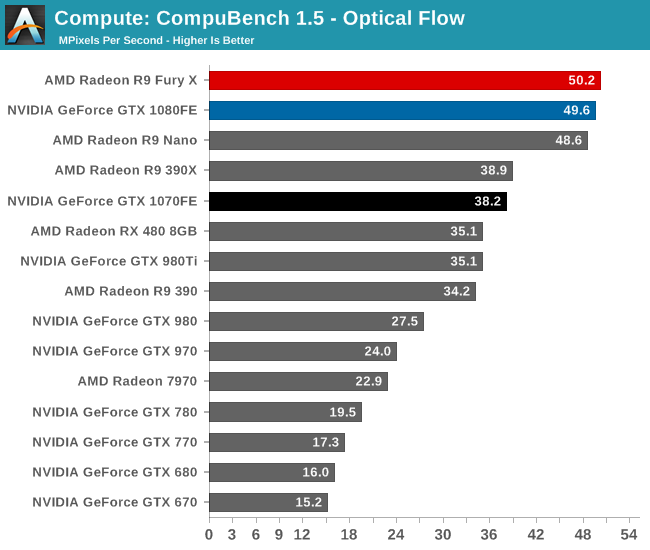 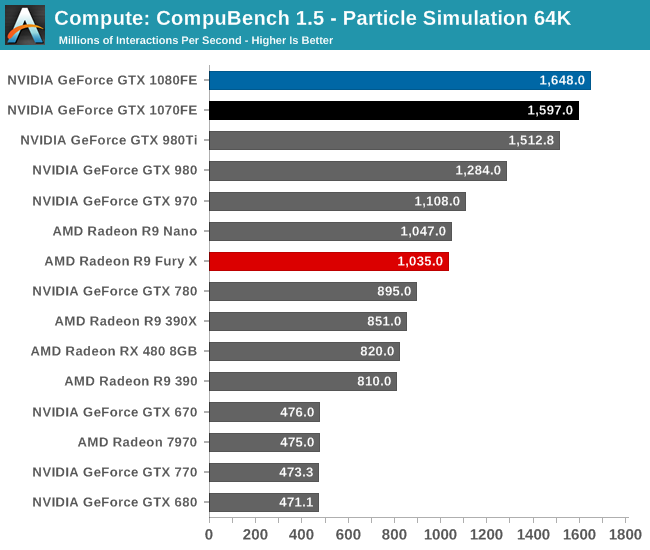 Depending on which sub-test we’re looking at, CompuBench is all over the place. In Face Detection the GTX 1080 takes a commanding lead, with GTX 1070 easily slotting into second place. On the other hand we have Optical Flow, which NVIDIA cards have traditionally struggled with, where even GTX 1080 can’t unseat Radeon Fury X. Finally in the middle we have the 64K Particle Simulation, which has GTX 1080 in the lead again, but not unlike LuxMark, it also has some interesting clustering going on.

Ultimately each test stresses our GPU collection in different ways, which as we can see greatly influences how the results pan out. Face Detection has always played well to NVIDIA’s strengths, and on a generational basis we get solid scaling from Maxwell 2 to Pascal. Even Optical Flow, which seems to favor raw FLOPs more than anything else, still shows very good gains with Pascal.

Particle Simulation is the outlier in this regard; Pascal’s generational gains are not insignificant, but they’re less than what we’d expect. Furthermore GTX 1080 and GTX 1070 are very closely clustered together despite their much larger difference in FLOPs. This may mean we’re looking at a CPU or driver bottleneck, or possibly some sort of internal path bottleneck. GTX 1080 has more FLOPs and a similar advantage in memory bandwidth, but once you get on chip things get much closer. If nothing else this goes to show that compute benchmarks are much more architecture sensitive than games, which is why we can’t make very broad generalizations for all compute workloads. 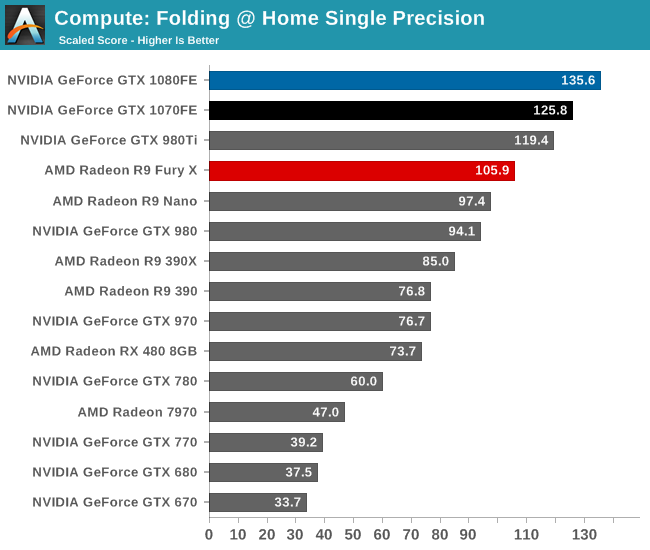 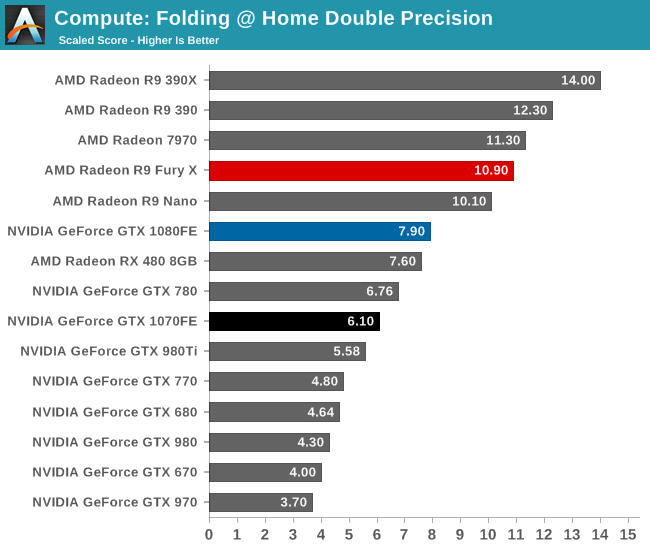 In single precision performance, to the surprise of no one the GTX 1080 is solidly in the lead, followed up by the GTX 1070. On a generational basis performance gains are decent, but at 44% for GTX 1080 they aren’t quite as great as we’ve seen from the card elsewhere. Meanwhile the two Pascal cards are again closer than we’d expect, with GTX 1080 leading by only 10%.

As for double precision performance, we can see that even with the higher overall compute throughput of GP104, it still can’t make up for the fact that FP64 performance on the GPU is capped at 1/32 by virtue of so few FP64 CUDA cores, which puts even NVIDIA’s latest and greatest at a disadvantage here. But if nothing else, generational scaling versus Maxwell 2 looks very good, with performance gains closely tracking the theoretical increase in FLOPs.