Long gone are the days when shipments of client HDDs by Seagate and Western Digital were around 75 million units per quarter. When PC sales drop to 60 – 66 million of units per quarter, it is simply impossible to sell that many drives. The two leading makers of HDDs supplied 45.7 million of hard disks in Q1 2016, down from 63.4 million from the same quarter last year. While Toshiba’s consumer drives should not be forgotten, it is evident that the increasing amount of new PCs use SSDs these days. 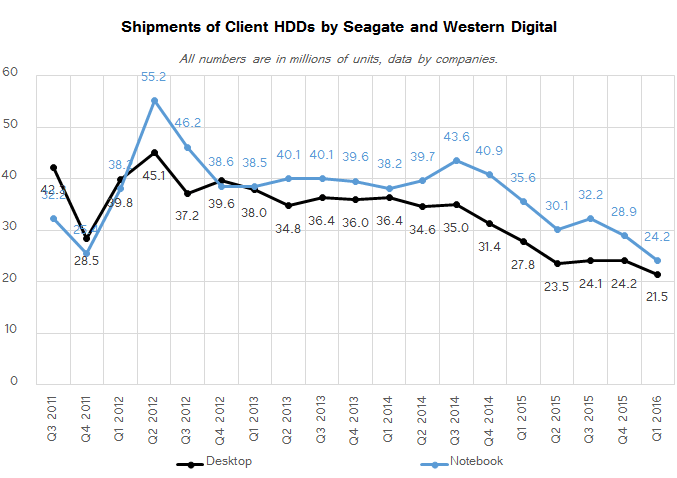 The SSD adoption rate in the notebook market in Q4 2015 was approximately 25~26%, according to TrendForce. In the first quarter that figure could easily go up because Seagate admitted that it did not want to play a part in certain areas of the low capacity notebook market. Moreover, as HDD platforms get more expensive in the coming years, hard drive makers may simply leave low-end bulk storage to SSD makers. In the end, it is relatively easy to build SSDs these days (it is not easy to manufacture NAND flash, of course), but HDD production involves a lot of R&D and state-of-the-art manufacturing facilities. As a result, companies like Seagate or Western Digital may simply lose interest in entry-level hard drives, especially given the fact that soon Western Digital will become a supplier of consumer SSDs as well. 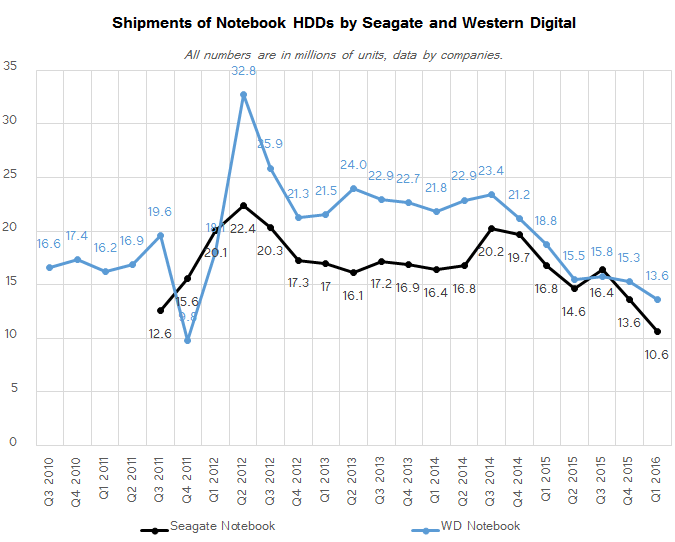 As pointed out in the previous report, Seagate includes shipments of hard disk drives it sells for game consoles into its 2.5” client HDD category, whereas Western Digital includes its drives for consoles into its consumer electronics category. As a result, the picture is somewhat noisy here. Seagate sold 10.6 million 2.5” client HDDs in the first quarter, which is a drop of 37% from the same period a year ago. Since the company deliberately decided not to fight for low-end notebook deals, such a sharp decline is not something unexpected. Meanwhile, Western Digital supplied 13.6 million of its 2.5” client hard drives in Q1 2016, 28% less than in the same quarter last year. 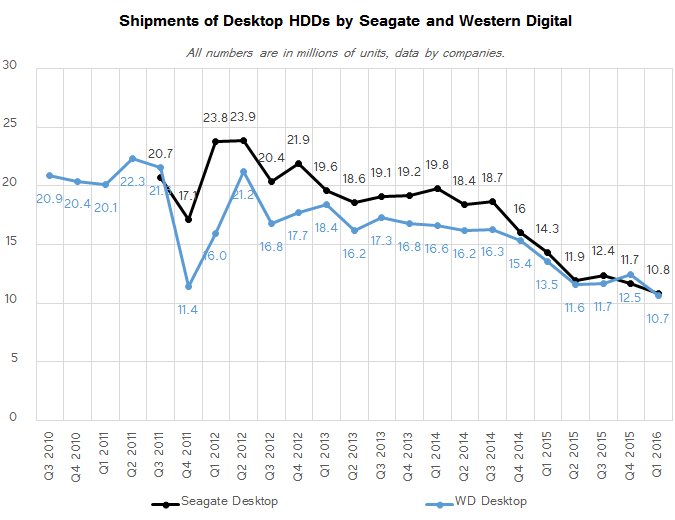 Sales of client 3.5” HDDs by Seagate and Western Digital declined by 22.8% year-over-year, in line with the deterioration in the HDD market. Moreover, actual shipments of desktop hard disks were on the same level for the two leading makers: Seagate supplied 10.8 million units (a 24.5% drop YoY), whereas Western Digital shipped 10.7 million devices (a decrease of 21% YoY). We do not know how many 3.5” client hard drives Toshiba shipped in Q1, but it is safe to say that the market is on the decline in general and it does not make a lot of sense to fight for desktop market share these days.

In its recent conference call with investors and financial analysts, Seagate re-emphasized that it expected sales of its client drives to continue declining, but to keep gaining capacity. Historically, sales of Seagate’s client HDDs accounted for 60% of its revenue, whereas sales of enterprise products accounted for 40% of its revenue. Given the current market trends away from installing HDDs into tablets, 2-in-1 hybrid PCs or ultra-thin notebooks, client HDD revenue will eventually drop to 40% of Seagate’s revenue whereas enterprise hard drives will account for 60% of its revenue, the company revealed. With that said, it is expected that Seagate will focus on higher-capacity drives rather than on inexpensive devices that help to boost unit sales, as the latter is not something that is needed ion a weakening market.

Because the number of PCs that cannot house more than one internal storage device is growing, external storage is getting some traction. Seagate and Western digital offer broad lineups of DAS and NAS devices under their own trademarks as well as under G-Technology and LaCie brands. While shipments of branded storage products do not drive huge volumes, this is a rather lucrative business for manufacturers offering higher ASPs. 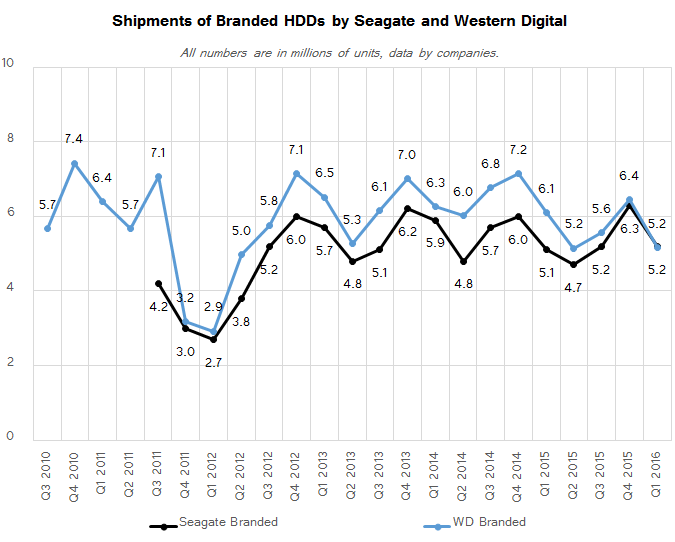 Sales of branded DAS and NAS devices by Seagate and Western Digital totaled 10.357 million units in the first quarter of 2016, down 7.5% from 11.190 million units in Q1 2015. The two manufacturers sold an equal amount of external storage products: Seagate shipped 5.200 million branded devices (up 2% YoY), whereas Western Digital sold 5.157 million branded products (down 15.3% YoY). Historically, Western Digital outsold its main competitor with its My Cloud and My Passport external HDDs, but in the recent quarters Seagate has begun to catch up whereas sales of WD began to decline.

One thing that should be kept in mind when analyzing branded storage is that no matter how many HDDs are inside a DAS or a NAS, they are all considered as one unit (e.g., a WD My Book, a WD My Book Duo and a fully-populated My Cloud DL4100 are equal from accounting perspective). As a result, while we do see that unit sales of branded external storage by the two large makers have been slowly declining in the recent quarters, we do not know anything about the exact amount of drives inside as well as their storage capacities.

The vast majority of consumer electronics (CE) devices nowadays use NAND flash memory. However, applications like set-top-boxes, DVRs, surveillance systems and game consoles remain sizeable consumers of hard drives, which is why makers of HDDs develop platforms specifically tailored for such devices. 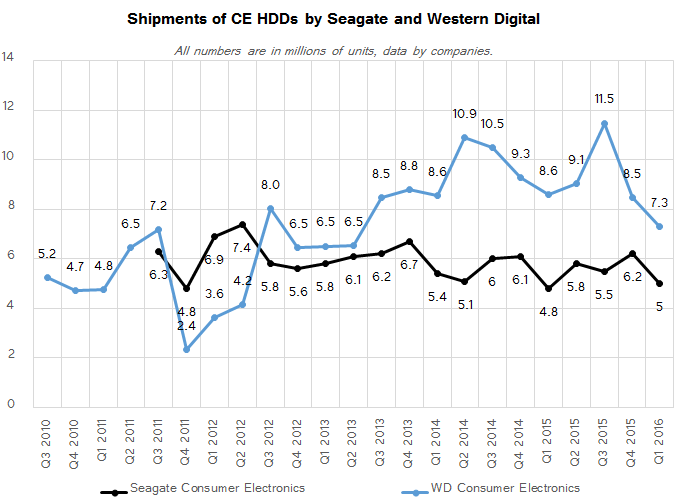 Since shipments of Seagate’s CE HDDs do not include drives it supplies for game consoles (they are included in client 2.5” HDD sales), its CE business looks relatively stable and mostly driven by seasonality. In the first quarter of 2016, Seagate sold 5 million of CE HDDs, slightly up from 4.8 million supplied in the same period a year ago.

By contrast, Western Digital recognizes HGST Travelstar HDDs for Sony’s PlayStation 4 as consumer drives, which is why its CE numbers significantly depend on the production of PS4. Since in Q1 console sales and manufacturing are not on the rise, sales of Western Digital’s CE HDDs declined to 7.3 million units, down 15.2% from Q1 2015. The reasons for the drop are unclear - perhaps Sony decided to slow down PS4 production, or perhaps shipments of some other Western Digital products were not strong.

Anyway, due to account policies of the two leading makers of hard drives, it is impossible to compare their CE HDD businesses directly.