As a low cost motherboard, there are two ways a power reading can be interpreted. If it’s low, then due to the lack of controllers compared to the high end motherboards, this is to be expected. If high, then the power delivery might be a budget implementation with reduced efficiency. For the MSI Z170A SLI PLUS, we got an impressive 73W delta from long idle to load in our test, with the load power being the lowest we’ve seen on a Z170 motherboard so far. 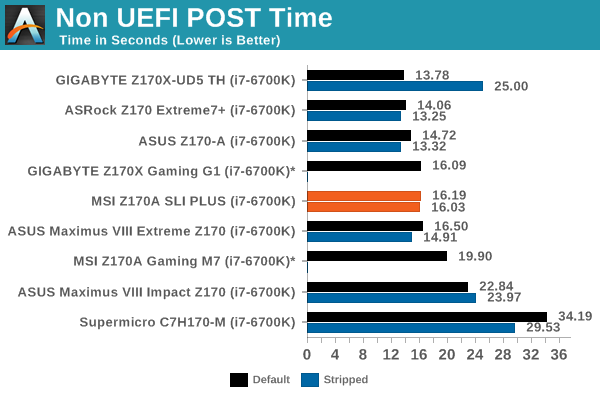 For whatever reason, when Z170 was launched there was a regression in POST times from most motherboard manufacturers. DDR4 training does take longer than DDR3 used to, but instead of sub 10-seconds being a good target, for Z170 anything under 15-seconds is good to see. The SLI PLUS floats on the 16 second boundary here, with not much change when the BIOS is stripped and controllers disabled.

We noted earlier in the review that for a low-cost motherboard, MSI still implemented the Realtek ALC1150 codec with a few modifications like PCB separation and filter caps, but not the big modifications we see on more expensive products. The ALC1150 still performs reasonablt well on SNR, although THD+N isn’t the best we’ve seen. 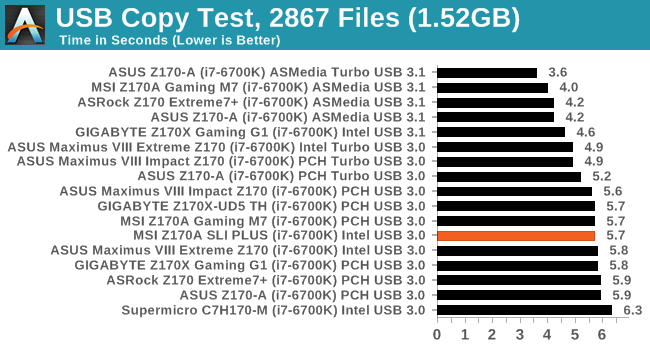 Unfortunately, due to the USB Type-C on the motherboard and my lack of a cable that isn’t cat-chewed, we were only able to run USB 3.0 results in time for the review. This came in at 5.7 seconds, a nice medium between the two collections at 5.6 and 5.8.

Similarly to POST times, DPC Latency seems to either be quite good or rather bad on the current crop of Z170 motherboards. The SLI PLUS is better than most, hovering just above 110 microseconds at its peak.