In line with everything else in the motherboard space, MSI’s software package also gets an iterative update with the new Z170 platform. In previous years, we have heralded MSI for providing some of the best automatic update software available for motherboards with Live Update 6, which continues in the Z170 package. On the other side of the spectrum, we’ve criticized MSI for offering a 2.1+ volt user-facing setting for the processor in software with virtually no safety fence as even sub-zero overclockers do not go that high. Perhaps somewhat ambivalently, this is still true with Z170 as well, although to a lesser degree.

The first thing noticeable with an installation from the driver disk is that MSI puts in a custom logo / background: 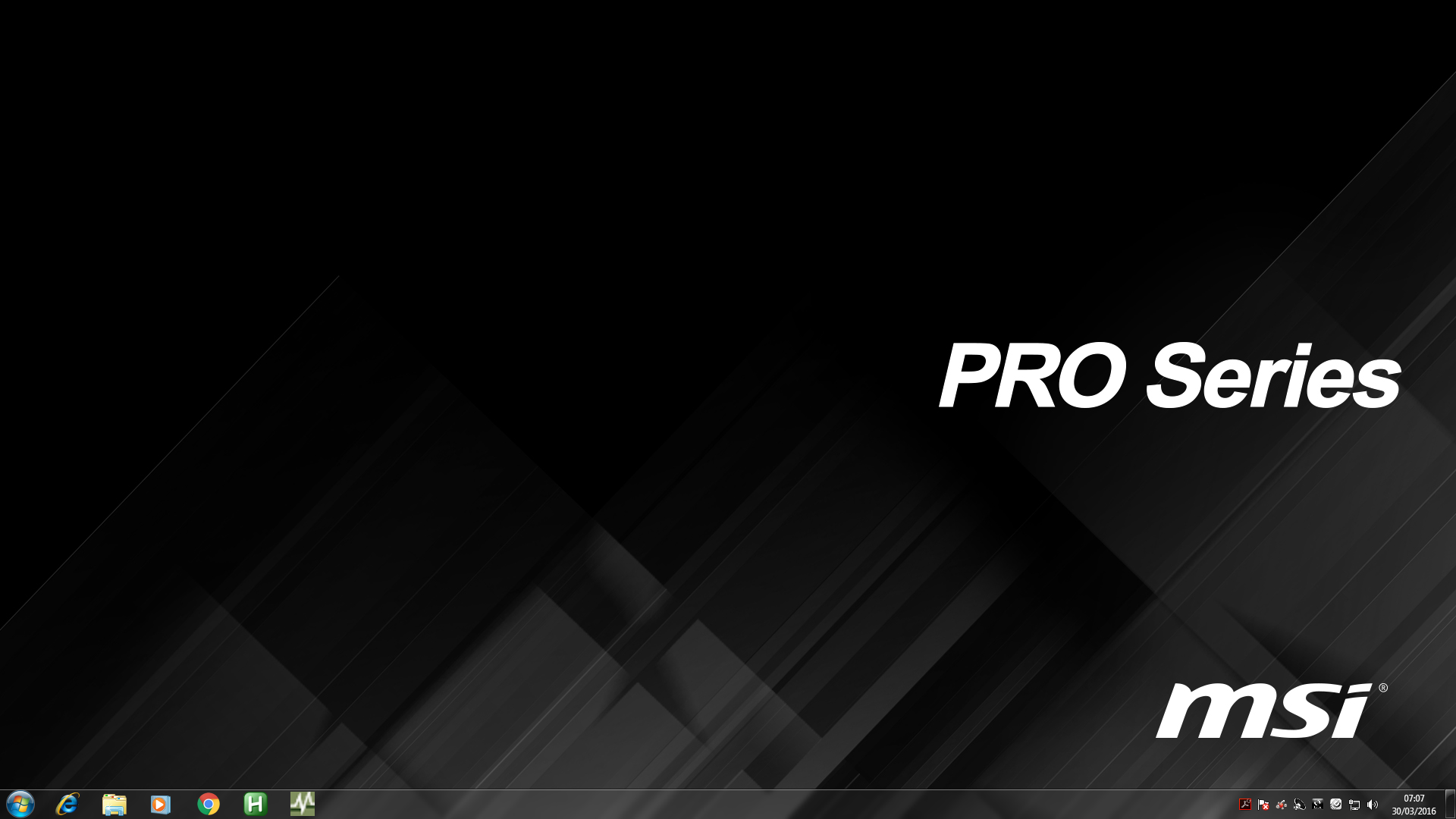 It might sound superfluous, but in most PCs built today, users do not know the motherboard make inside. So by implementing a custom background design on installation, even if it is changed, at least the user gets another hint about what is inside. It’s also a no-brainer. This sort of background appeals to a wide range of users who would be buying this motherboard, and it is such as easy near-zero cost value-add to a system bundle I am surprised that not many other motherboard manufacturers do it.

The Live Update tool continues is usual display pattern, available to regularly check for updates and showing what drivers/utilities are available online that can be updated to the next version. In recent versions of this software MSI has included the size of the download as well as the current/online versions to allow users to make a more informed choice. 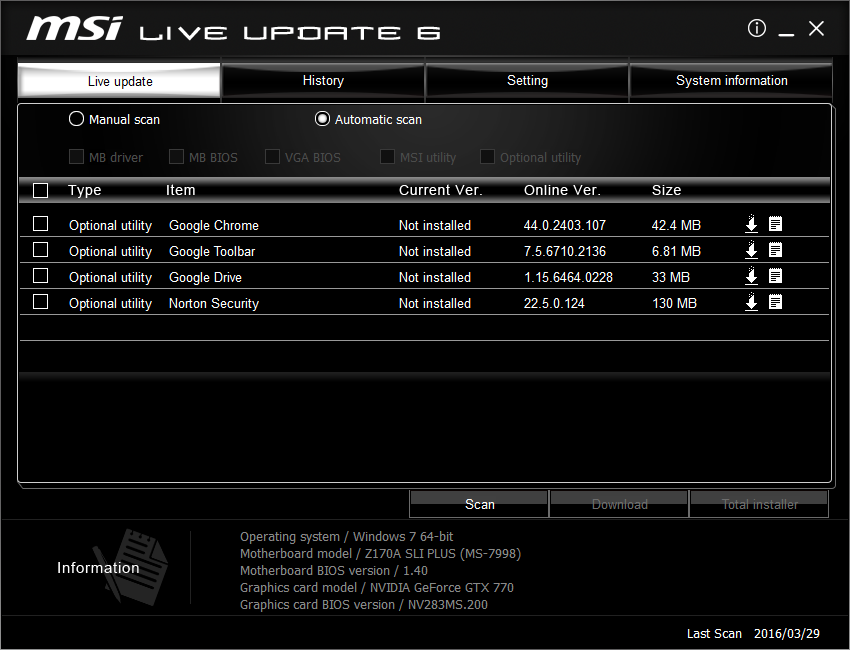 We had no issues with this software, and it still remains one of the easiest update tools from motherboard manufacturers to use.

One of the tools I love to see in motherboard software packages is a fast boot / restart in BIOS mode option. This is partly selfish – when testing the system it makes it easier to enter the BIOS through this method rather than repeatedly pressing F2/Del during a long POST sequence, but it can yield benefits for those who like to fine tune their system over several months. 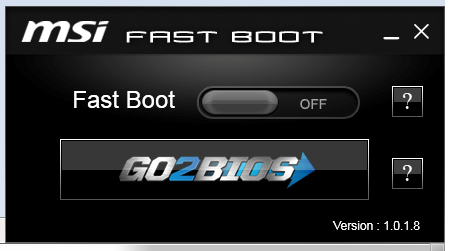 CPU-Z is a shareware tool used by some enthusiasts to get details about their processor and system, but also to verify overclocks and the whole package is used as a verification tool when it comes to competitive overclocking, featuring in screenshots. As a result, the developers of CPU-Z allow manufacturers to develop skins (for a fee) for the software and distribute as necessary. MSI went in with this for the gaming range, and the gaming version is included in the bundle. 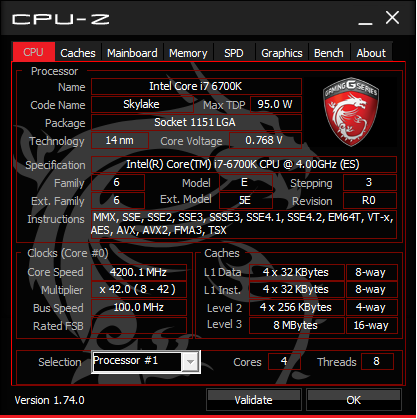 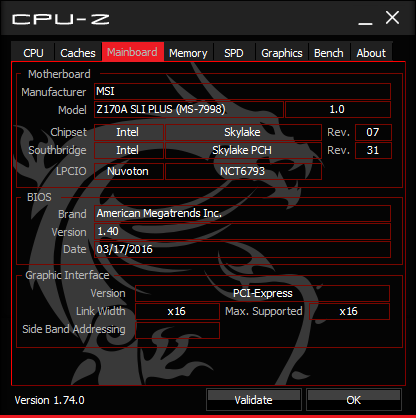 Having a personalized home storage cloud, as opposed to just having home storage, is starting to become a thing. As a result, some motherboard manufacturers have started to include software to make this possible using their products – typically this software is just a skinned variant of a licensed package. 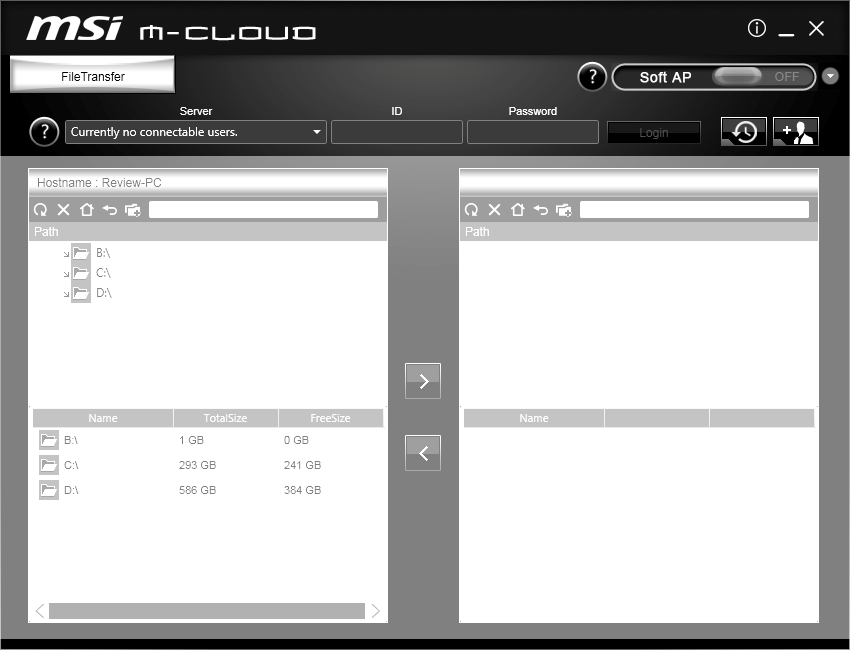 MSI’s RAMDisk utility has been part of the package for a couple of years, with the concept being that users with large amounts of DRAM might want to partition some of it into a quick read/write cache valid when the system is in use. In the last generation we lamented the fact that the tool needed to enable a RAMDisk before you could adjust the size – this changes with Z170 by implementing a small 256MB RAMDisk on install, and it becomes a separate software element in its own right. 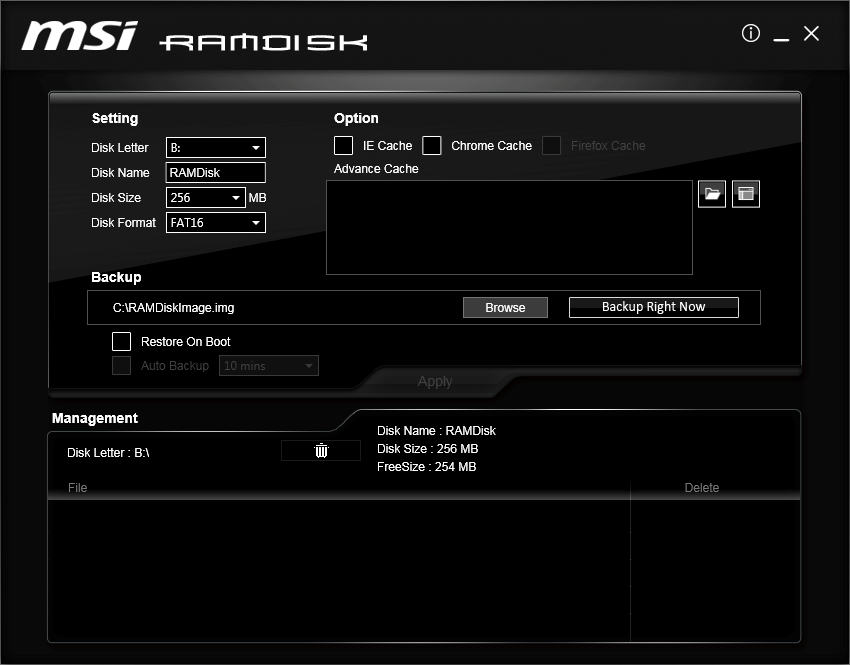 The Extreme Tuning Utility from Intel is now an easy gateway to allow users to both overclock and benchmark their system. Some motherboard manufacturers include it with their driver packages, although anyone with a modern Intel based system can download it and see more information about what they have. 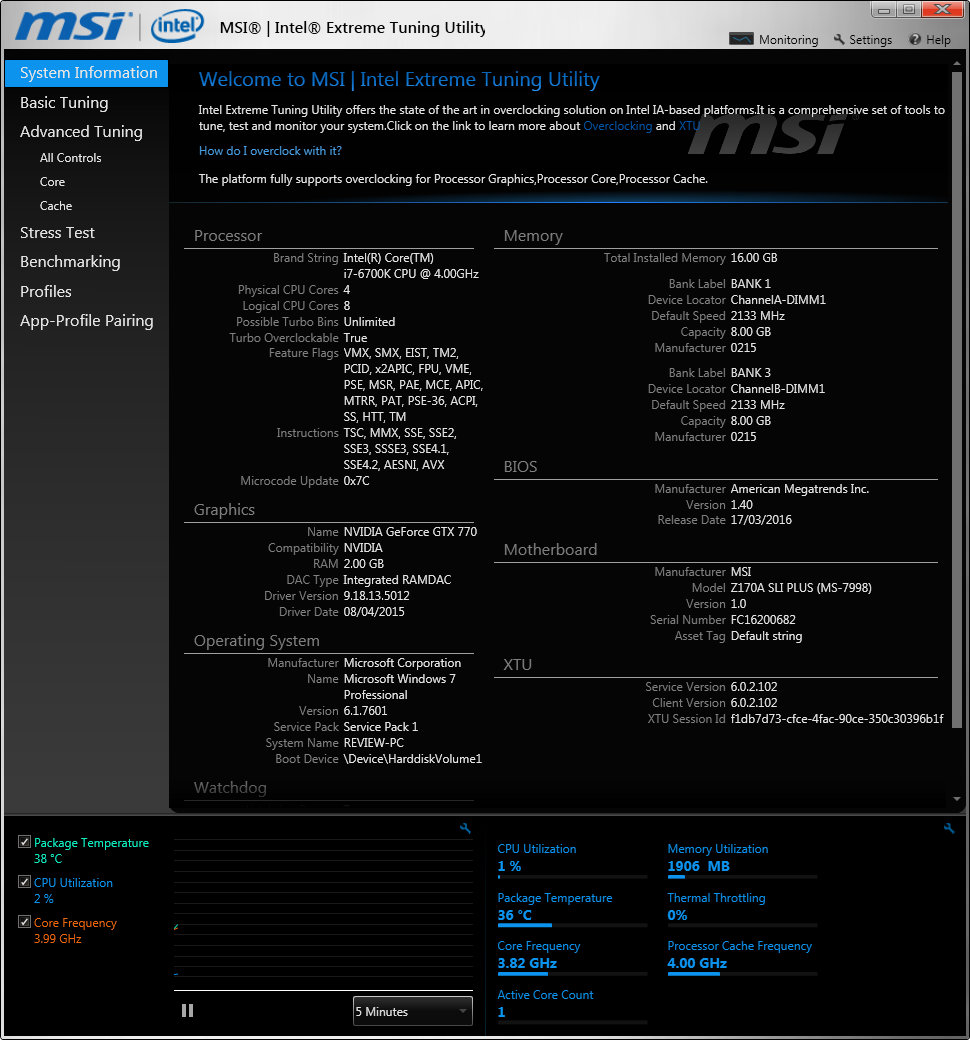 We also ran the XTU benchmark, and scored 1238. The screenshot is in the photo gallery below.

The previous implementations of MSI’s software have focused around the Command Center, with the idea that the other tools would all be accessed through this hub. For Z170 that idea has sort of melted away, leaving Command Center as a tool for overclocking, fan adjustment and monitoring. 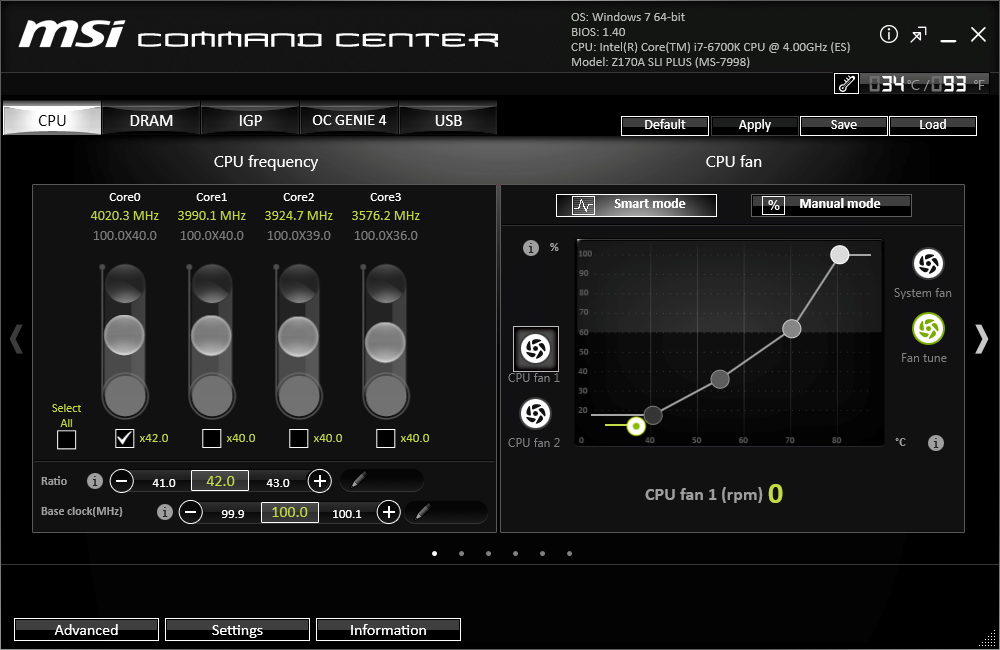 From previous versions of the software, not a lot has changed. RAMDisk as mentioned above has been removed into its own package, and the OC Genie functionality has been updated for the new automatic overclock tool. 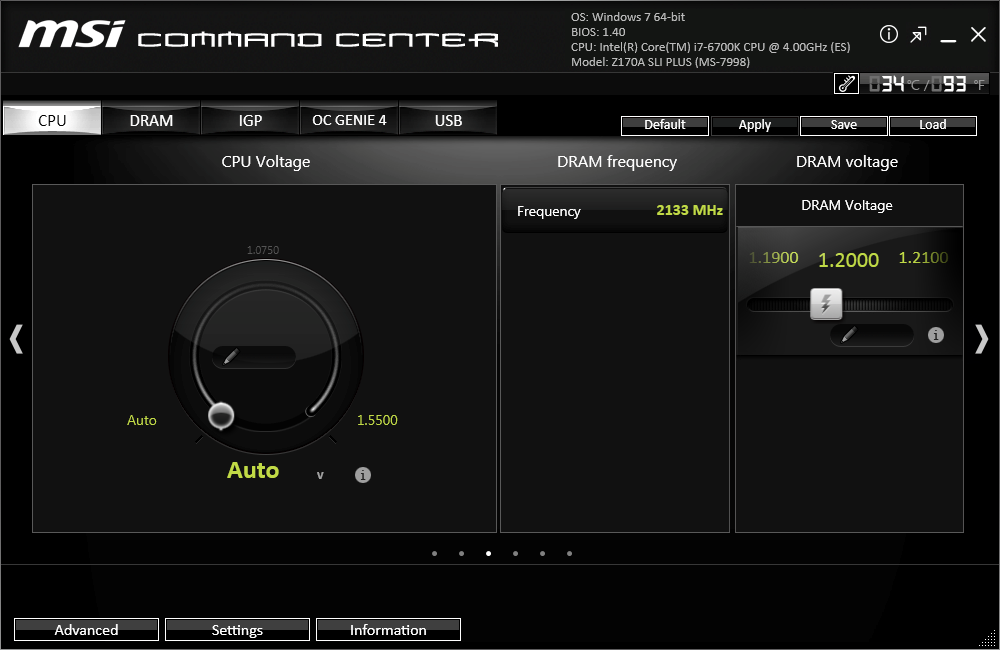 My main criticism of this tool is still here, although MSI have at least adjusted the severity – the voltage overclock dial still shows ‘1.55 volts’ as the maximum to which the CPU can be placed (it used to say 2.1 volts). This is despite the fact that this voltage will cause the system to overheat pretty quickly under air/water cooling and potentially damage the processor, the motherboard or something else. Sub-zero overclockers (and some extreme water setups in air conditioned environments) go this high, so it is a little extreme for 99% of users. What I would like to see is it go from 0.9V to 1.3V, and then require an ‘advanced mode’ button which would unlock anything above 1.3V. 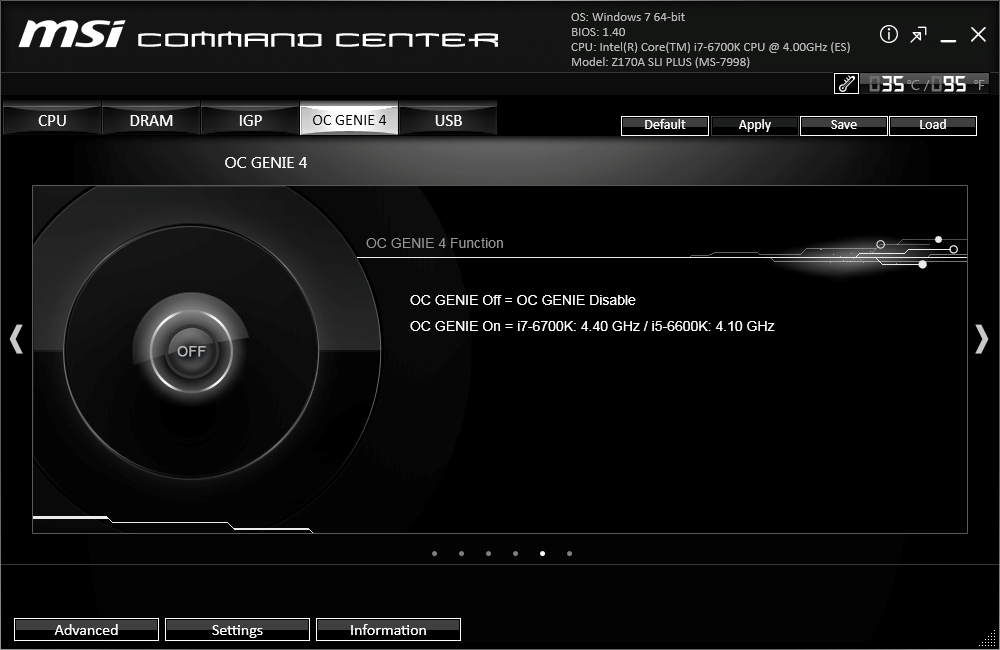 OC Genie only has one mode here, and 4.4 GHz is a reasonable overclock for an i7-6700K. Your mileage may vary, as our CPU was not completely stable with the OC Genie setting (it failed OCCT after 4 minutes).