By the nature of being a large E-ATX motherboard with a number of extra controllers, one would expect the M8E to draw a fair bit of power, even under CPU load. 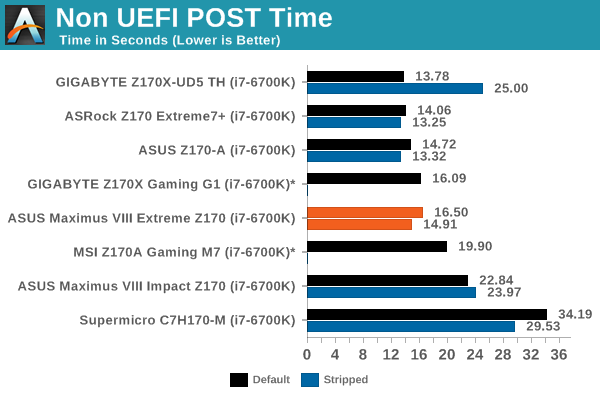 Perhaps due to the emergence of Windows 10 and fast boot sequences, fewer motherboard companies are worrying about POST times, although they are now arguably the longest part of a start-up process, especially with the additional DDR4 training needed for validation. The Extreme is reasonably comfortable for its size at 16.50 seconds.

Audio performance from the Extreme gives it the highest SNR of any 100-series motherboard we’ve tested before. 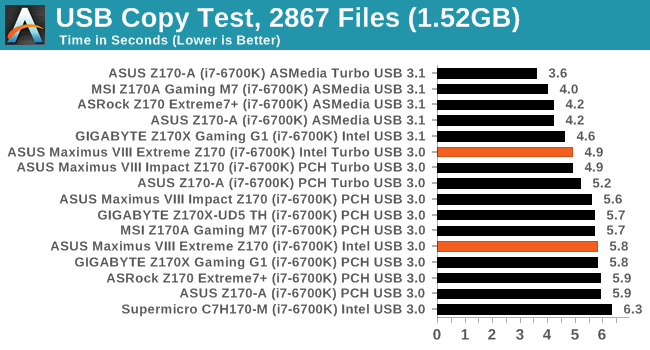 With ASUS’ USB Turbo, we get great performance in our USB 3.0 test. Unfortunately due to the nature of the Intel USB 3.1 controller, our testing software reports erroneous results stating that a transfer is complete faster than could be possible (and it’s a highly variable result). Interestingly we also had problems with the ASMedia controller, which behaved similarly.

For better or worse, DPC Latency has been a wild ride on Z170. Some companies care deeply, others are not too fussed. Despite this, ASUS seems to have nailed down the formula for a great DPC Latency, and the Maximus VIII Extreme takes the crown from its smaller sibling in style.