The first question to ask about the Radeon 9500 Pro is how does it differ from the Radeon 9700 Pro? 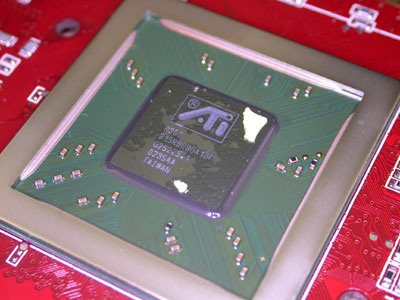 The Radeon 9500 Pro uses the same R300 GPU but with a one noteworthy modification:

The Radeon 9500 Pro has two 64-bit DDR memory controllers instead of the four in the Radeon 9700 Pro. This cuts the 9500 Pro's memory bandwidth to half of the 9700 Pro at identical clock speeds, and puts it in line with the GeForce4's 128-bit DDR memory subsystem.

Then there's the Radeon 9500 (non-Pro) which also has the reduction in memory bandwidth, but along with that it also loses half of its rendering pipelines. This makes the regular Radeon 9500 a significantly worse performer as it still only has one texture unit per pipeline, giving it a disadvantage when compared to the GeForce4.

ATI implemented a new (for ATI at least) design and manufacturing procedure when they introduced the R300 to make transitions to scaled down cores much easier. If you remember back to the days of the first Coppermine128 based Celerons, they shipped with half of the L2 cache of the Pentium III. In actuality, the same 256KB L2 cache from the Pentium III was present on die but only half of it was enabled; the remaining 128KB was either bad or not tested.

As you can guess, along with the scaled down GPUs the 9500 series also runs at lower clock speeds than the Radeon 9700 Pro.

The Radeon 9500 Pro runs at a 275MHz core clock with 270MHz DDR memory (effectively 540MHz) for 8.64GB/s of memory bandwidth. This is just slightly lower than the 8.8GB/s of bandwidth of the GeForce4 Ti 4400 which should be the performance target for the Radeon 9500 Pro (they also share the same core clock speed and theoretical fill rates).

The Radeon 9500 runs at the same clock speeds as the Radeon 9500 Pro, but again only comes with half of the rendering pipelines of the 9500 Pro.

The decrease in transistor count, lower clock speeds and subsequent increase in yields allows ATI to manufacture the 9500 series at a lower cost and thus offer them at a much cheaper price point than the Radeon 9700 Pro. The Radeon 9500 Pro has a suggested retail price of $199 and the Radeon 9500 has a SRP of $179. Both cards will be found for much less online but those are the price ceilings.