Because of Supermicro’s big story regarding base clock frequency overclocking on non-K processors with non-Z platforms, it was imperative that we also get a non-K processor in to test with it. Typically Intel only seeds the top processors for review, and we had not had a chance to get other processors in to test when this motherboard arrived, so Supermicro also seeded us a Core i3 processor.

The Core i3-6100TE is an unlikely candidate for this testing. It’s not a processor that a user can go out and buy. The TE designation is a variant of Intel’s low power processors, whereby a T processor is typically 45W and the TE models are even lower - in this case 35W. These processors are typically for larger customers only, or the bigger OEMs, so you are more likely to see them in mini-PCs or all-in-ones rather than custom builds. If you are lucky, a big system distributor (think Dell or Lenovo) or even a large system integrator might have access to them and offer them for sale as part of a system. But by and large, aside from eBay, you would be lucky to find one for sale on its own unless you have a distributor nearby that sells OEM parts.

There are several angles to testing the CPU as well. Firstly, as a processor in its own right – where does it sit in the stack and if the price merit the performance and power characteristics. Secondly, as a tool for overclocking, and can we verify that the changes Supermicro have made to the C7H170-M to enable base clock overclocking on processors like this actually works. Then the third angle, which is perhaps the biggest: How well does an overclocked i3 processor actually perform, and why does Intel not offer an i3-K equivalent?

We will be addressing each of these questions as part of this review.

For those who are not keeping many tabs on the processor market, Intel’s mainstream desktop processor line comes in five flavors:

Not all processor segments (C/P/i3/i5/i7) combine with every type (K/S/T/TE), and it mostly ends up being a pick and choose depending on how Intel sees the market. So for example, for desktop processors, Skylake has three Core i7 (one K, one T), five Core i5 (one K, one P), seven Core i3 (two T, one TE, one P), six Pentium (two T, one TE) and four Celeron (one T, one TE) parts.

Choosing the CPU, and the Overclocking Conundrum

When a user, or an OEM/SI, needs a processor, several factors come into play. Assuming that they definitely need a Skylake part, the three things most people focus on are performance, cost and power. Depending on which one is the most vital automatically limits the choices – if a user needs the most performance, then a Core i5 or Core i7 is on the cards, or if the user needs something under $120, then the low-model Core i3 parts are as high as you go.

Most enthusiasts who want to overclock have a different set of requirements. At current, only two Skylake processors allow multiplier overclocking – the Core i5-6600K and Core i7-6700K, which we reviewed and looked into overclocking scaling last year. These are 91W parts that start at $242 for the i5, making entry into this market for mainstream enthusiasts only.

It wasn't always like this. Several generations ago, overclocking (via the base frequency) occurred with every CPU that was on sale, and users would regularly go after the mid-range part with a good cooler and overclock it to be the equivalent of a high-performance processor. It made computing fun, and got me into the world of competitive overclocking which actually ended up with me working for AnandTech, so I’m a nice big advocate for it. To reach back into the nostalgia stakes, back in 2014, with the launch of Haswell’s Devil’s Canyon parts, Intel also launched an overclockable Pentium processor, the Pentium G3258.

The idea behind the G3258 was to offer a cheaper processor (~$72) that could be overclocked and offer a low cost entry into the world of overclocking. As with every review website, we tested the Pentium G3258 in both default and overclocked mode. There were two main conclusions. Firstly, the single core performance at 4.2 GHz was great and it felt like a high-end processor for day-to-day tasks like browsing the web and email. Secondly, because it was physically still a dual-core Pentium processor, overclocking it did not elevate it to the status of a coveted Core i5 at a third of the cost. So despite the price, enthusiasts looking at some interesting cheap overclocking and performance were not impressed, and went back to the Core i5/i7 processors because of the fundamental performance difference.

Intel did not release a Pentium G3258 equivalent for Skylake, so we cannot probe that segment. But one thing that did come out of the G3258 testing was a question on a lot of people’s lips: would an overclockable Core i3 provide enough performance to go after some of the big guns?

Intel has never expressed much interest in an unlocked Core i3. Some users might argue that the G3258 felt more of a forced part because it was never given a name with the ‘K’ unlocked designation, such as the G3240K (the base processor was a G3240 underneath). Despite Intel’s PR enthusiasm for overclocking, it seems they only want it at the high end of their product stack. An astute observer might point out that offering a cheaper part might cut into sales, especially average selling price, and Intel has no competition beyond an i3 right now so it makes sense they do not want to talk about it. But everyone wants to know ‘if’ an i3 can branch out in performance.

So this is where Supermicro’s C7H170-M motherboard, our Core i3-6100TE sample, and this review comes in. 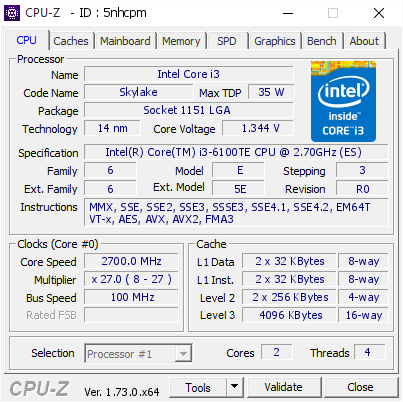 It also makes the story regarding base clock overclocking being enabled, then removed, then kind of enabled again interesting to follow.

The next few pages will showcase our usual CPU benchmark suite. Alongside the Core i3-6100TE at stock frequencies, we will also put in our overclocked numbers for our 135% stable overclock (moving from 2.7 GHz to 3.645 GHz) as well as results from processors in that range to which we have data for. After the results, we will discuss the actual process of overclocking, and the results of scaling the base frequency from 100 MHz to 145 MHz. Then we will take a page to answer the question: is overclocking a Core i3 actually worth it?