The GIGABYTE board is surprising low for idle loading, beating out the mini-ITX ROG model, but the load-to-idle delta of 122W is the highest we’ve seen from any Z170 motherboard so far. 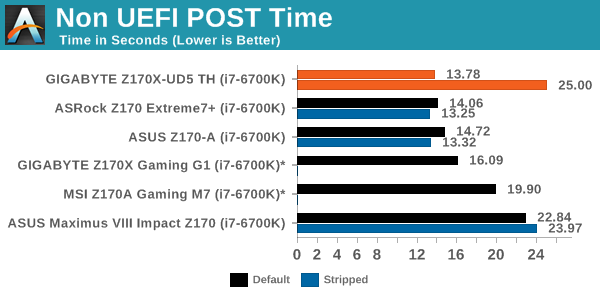 The GIGABYTE Z170X-UD5 TH also does really well in our POST time analysis, making the default POST time the fastest we’ve seen. Attempting to do a ‘stripped’ POST time through disabling controllers caused the system to take longer however. 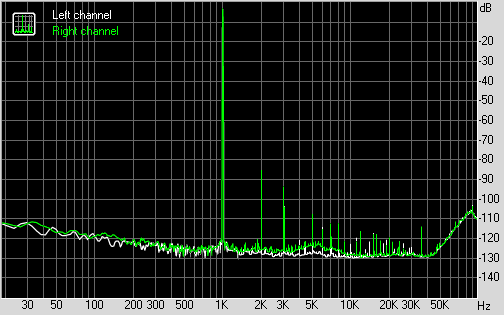 We’ve had issues with GIGABYTE’s premium audio interface and our testing in the past; either due to driver settings or the additional software, running the speaker volume at 100% causes a large amount of distortion in our signal resulting in very poor results. In fact, any volume over 67% caused this issue. We reduced the volume to 50% to take some measurements, with all the audio software tools uninstalled as much as possible, and we had some reasonable performance out of it in the end. Ultimately GIGABYTE has told us in the past that 100% volume in most circumstances is probably not a realistic interpretation of user experience, but I’m still not keen on the large amount of software interference and the user should be able to use the codec bare if wanted.

In USB 3.0 performance, the Z170X-UD5 TH runs a similar line to the other Z170 motherboards tested. Also like other Alpine Ridge motherboards, it breaks our test for USB 3.1 and we were unable to get a result. Our software indicates the copy being finished before it actually has finished (essentially reporting when the ‘send’ signal completes rather than the ‘received and correct’ signal comes back), reporting speeds in excess of USB 3.1 is capable of. This seems to be due to Alpine Ridge rather than anything else.

It would seem that some manufacturers are still feeling out DPC Latency on the platform, with ASUS going below 100 and almost everyone else hitting over 200. I expect this should get better over the life cycle of the platform.