A proportion of this page was posted with our GIGABYTE Z170X-Gaming G1 review due to similarities within the same generation of products. Text has been updated to match the specific features for this review.

I mentioned in the overview that GIGABYTE’s software stack has improved for the Z170 generation of motherboards, and that was no joke. Previously we had the high-contrast operations of APP Center and the small applications therein which might have strained the eyes of users as well as not making it easy to see what options were where. This changes for the Z170 platform, with a much smoother aesthetic and the options are split out into enough mini-applications that can be called on individually to increase loading time. This also enables GIGABYTE to update each mini-app independently of each other, giving smaller download updates, but it can also split up some of the apps to only appear on certain models of motherboard (such as the 3D OSD on the Gaming line).

We could call it the APP CENTER, because all caps are clearly needed or at least that’s what the title says, but here is GIGABYTE’s new interface for their more integrated options.

As a visual display, barring the poor attempt to implement shadows by flat pictures on the icons, this is a lot easier to digest than the previous implementation. Apps are also moved apart, splitting several options into different menus and making it easier to find what you want. The base preferences for the App Center menu offer color changes and an update schedule, which worked well during our testing.

If we go straight in to the updates, it offers what software is currently due for update along with a description and the size of the download. For software that is not currently installed in the system but is offered as part of the package (such as Norton Antivirus or Chrome), these are siphoned off into the ‘not installed’ menu, which is a good thing. A very good thing indeed. 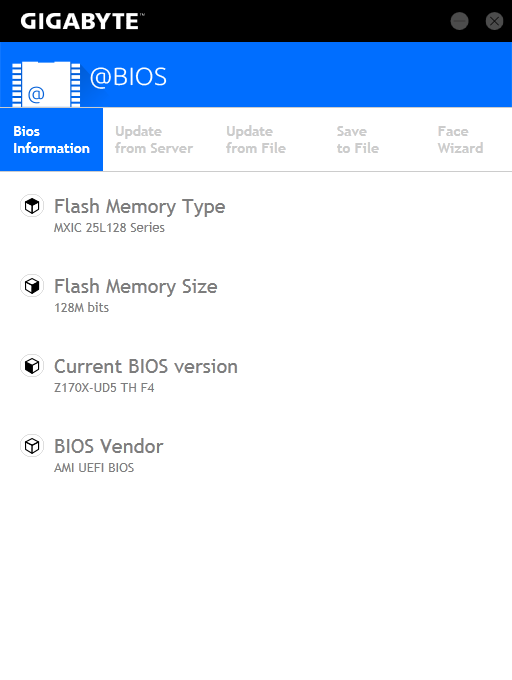 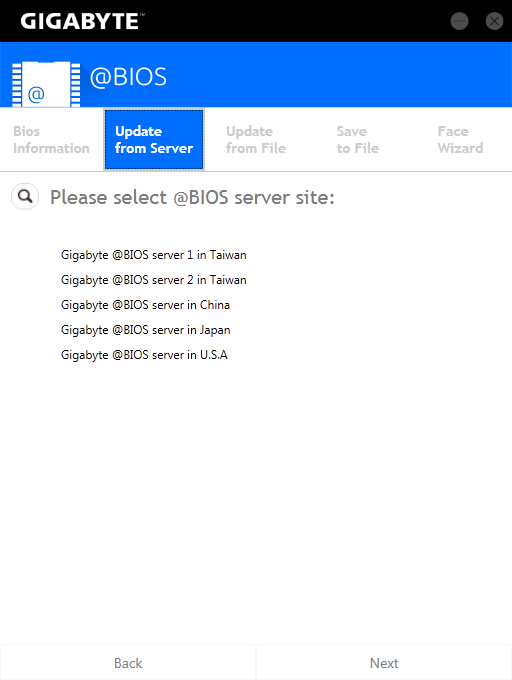 @BIOS is a stable of GIGABYTE’s software package, allowing updates either from a download or detecting what is new on their servers. Some vendors wrap this feature in with the App Center updates, which would perhaps be an idea for GIGABYTE to do so (or have two places where BIOS updates can be applied, in the App Center Updates and @BIOS). 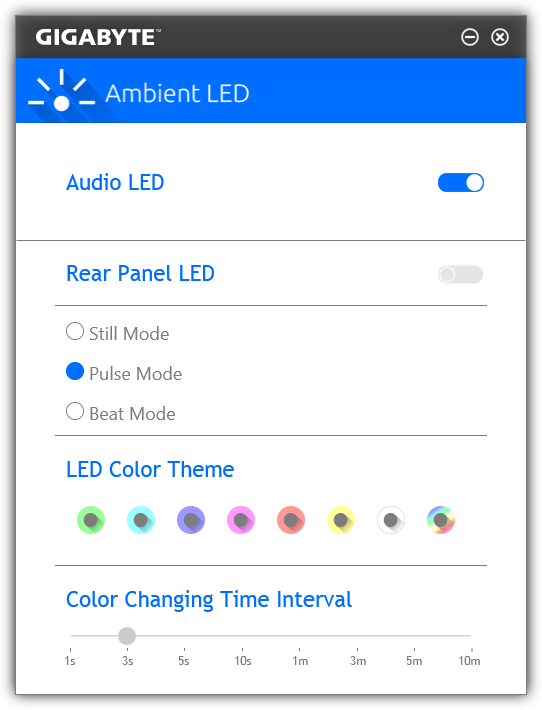 With the LEDs on the audio separation traces of the motherboard, GIGABYTE has enabled a 7-color system that can offer different modes that can be controlled through the Ambient LED App. The Still Mode keeps a constant color, whereas the Pulse Mode will bring the light on and off in a slow interval. The Beat Mode keeps tabs on the audio output and adjusts the intensity of the light accordingly. On top of all of these, the multi-color option can also cycle through the LED colors with an interval. Also, the LEDs can be turned off, as they may only appeal to a certain section of users.

Possible update suggestions for GIGABYTE to consider include the choice for a limited/custom set of colors, or to control the different LED colors independently around the motherboard. I would also offer the ability for custom time intervals (0.3 seconds on green, 2.2 seconds on red), or linking certain keys on the keyboard to different colors. That way for example, when playing a MOBA, MMO or FPS, when you activate a skill or select a weapon, the color of the system changes with that skill/weapon. If it could be hooked to change color or run a script of color with certain game events, then all the better. Time to get stabby on a knife round methinks, and make the system is red. 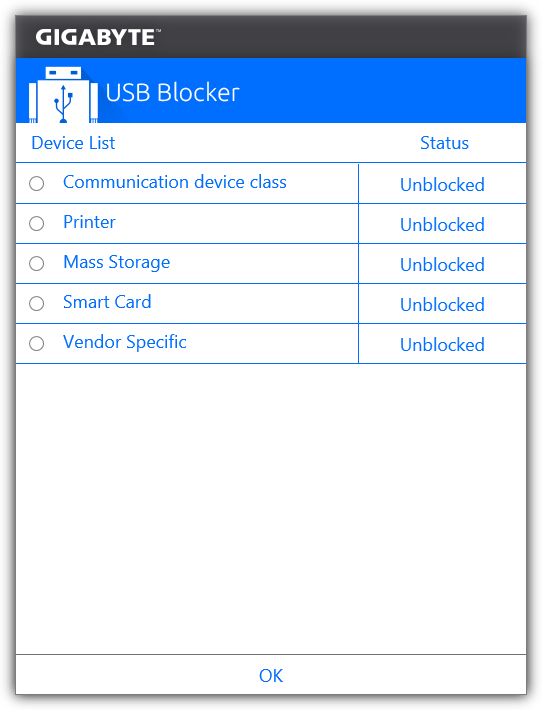 The USB Blocker app allows the administrator to block the use of certain USB devices to protect the system. This app is mainly for professional or public systems rather than a gaming rig, but is included here because it is easy for GIGABYTE to implement. 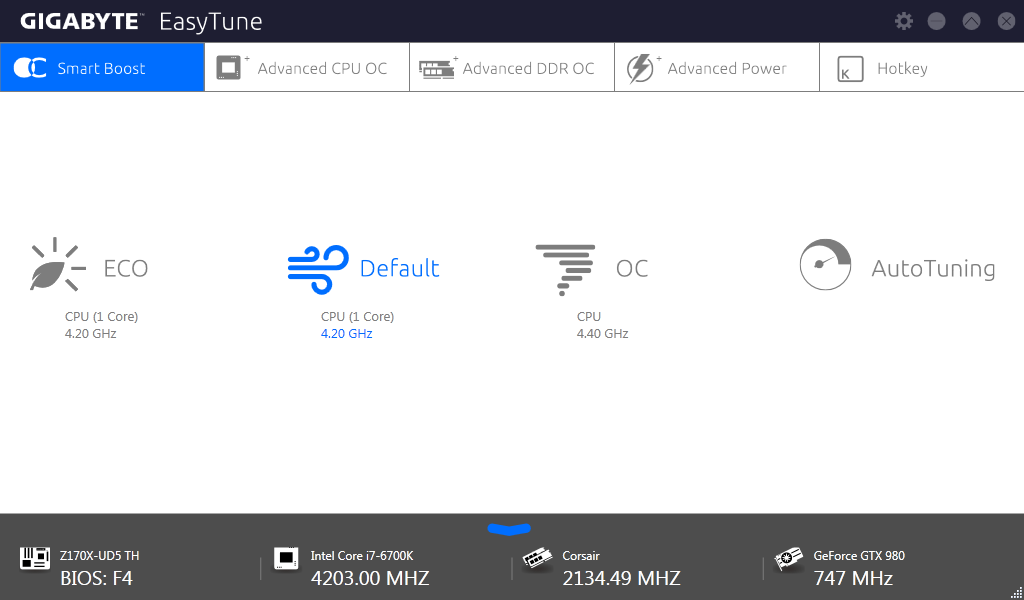 EasyTune is GIGABYTE’s graphical overclocking tool for Windows which offers this SmartBoost set of easy options alongside the deeper menus for manual overclocking. We tested both the OC option (a 4.4 GHz preset) and the AutoTuning overclock mode that tests for a peak frequency (we got 4.6 GHz) and both worked, although it is worth saying that the AutoTuning option is fairly basic with no room to select custom temperature ranges, voltage limits or stress test/stress test durations. 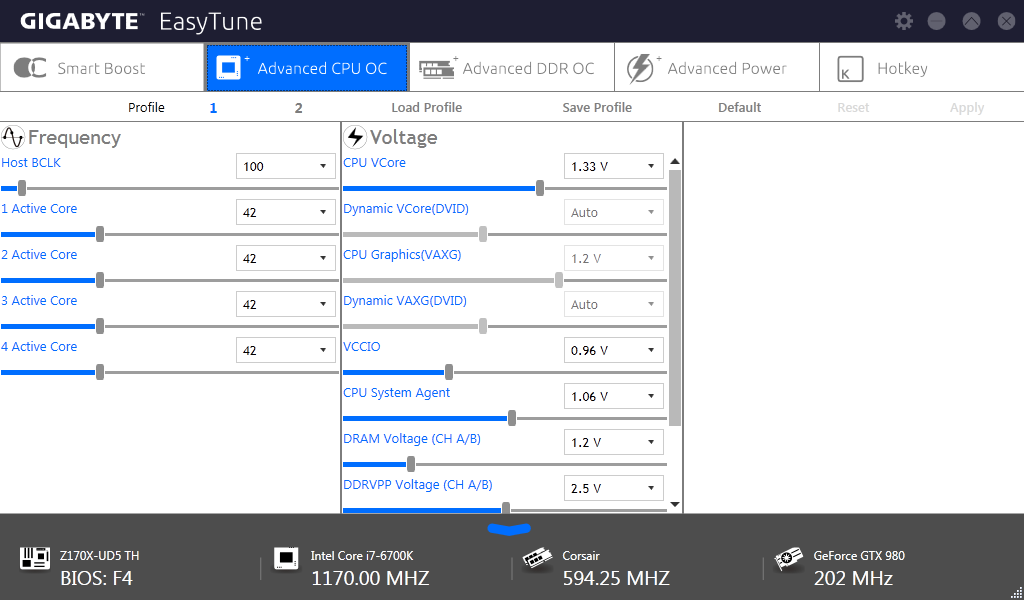 The other tabs in EasyTune give a similar set of options to the BIOS but with sliders and dropdowns. There is also a HotKey mode for users to apply an overclock on the fly. Users will have to download the GIGABYTE Tweaker tool if they want to adjust overclocks using a simple keyboard interface. 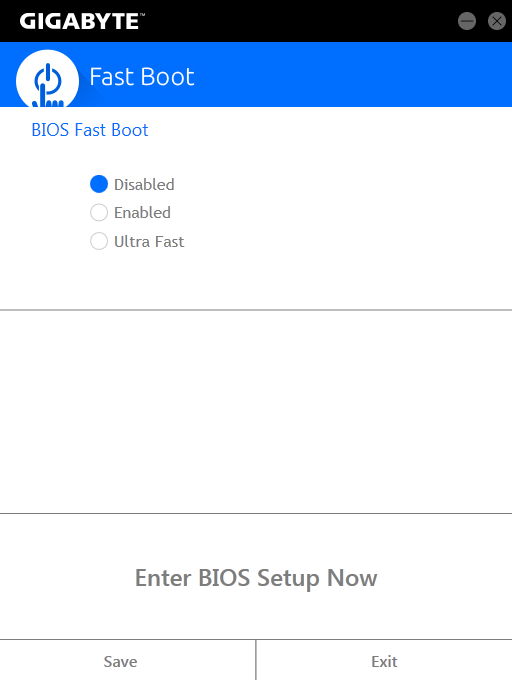 The Fast Boot software is something we use a fair bit, purely based on that ‘Enter BIOS Setup Now’ option which simplifies BIOS based overclocking without needing to break fingers or keyboards by hammering F2 during POST or entering the BIOS while in UEFI Quick Boot mode. 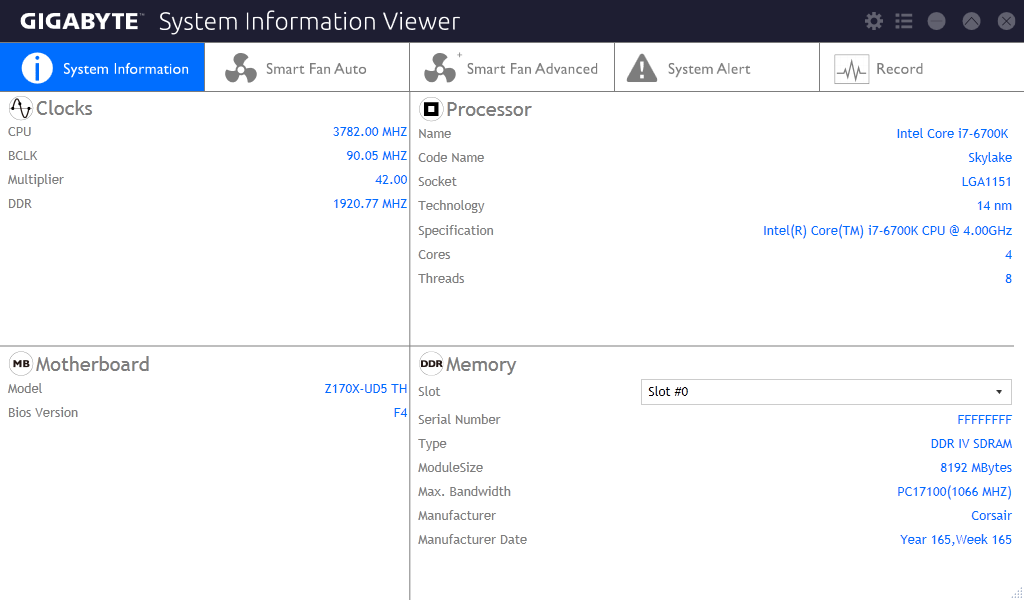 The System Information Viewer gives a breakdown of what is inside the system (we’re still waiting for a system browser, similar to MSI/ASRock), but also contains all the fan options as well. 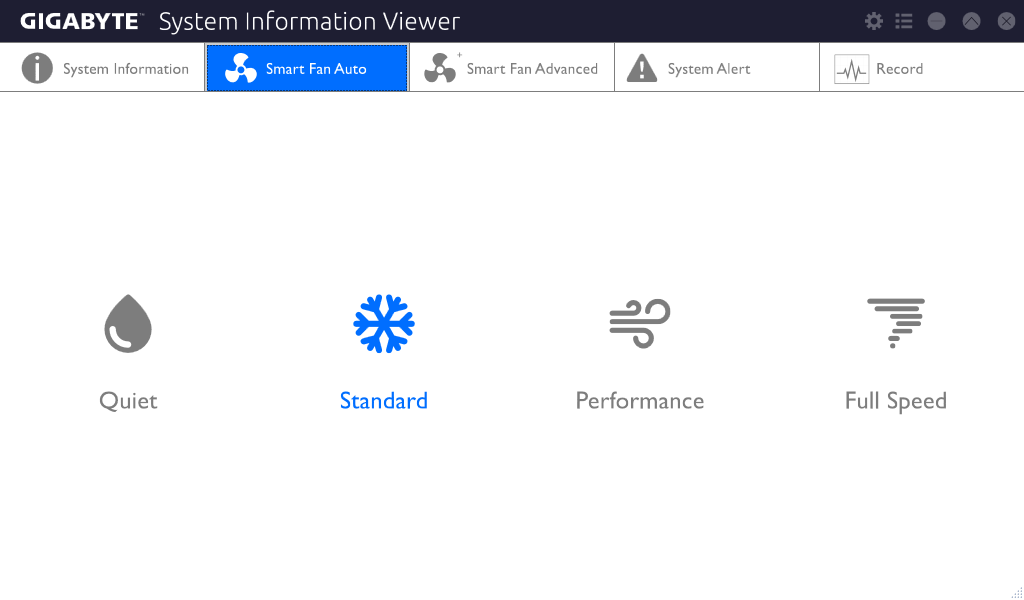 For a series of simple presets, GIGABYTE offers these four: Quiet, Standard, Performance and Full Speed. For anything more than this, we move to the Advanced tab: 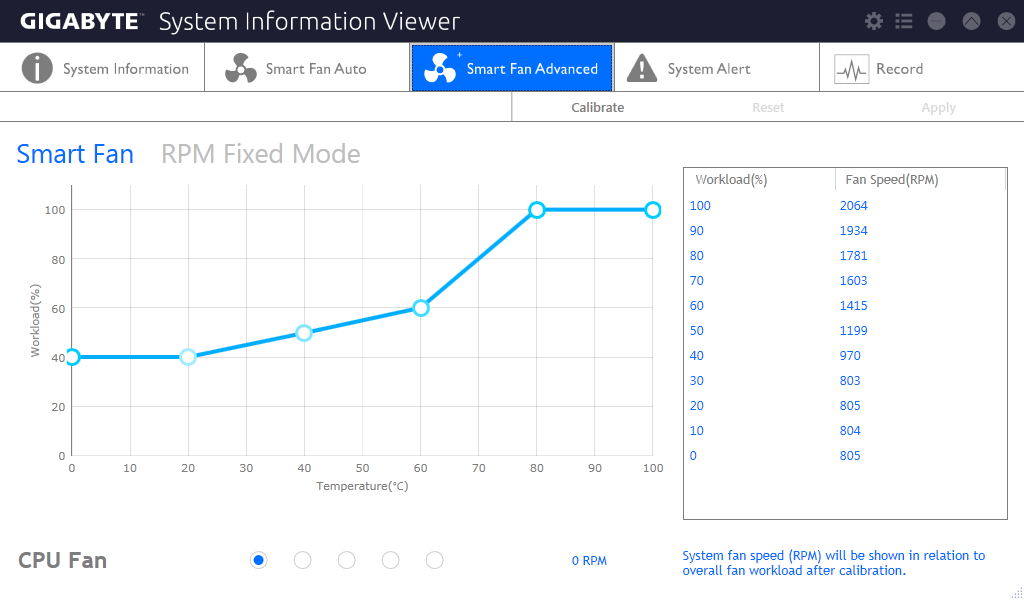 Through this we can test each fan for its fan RPM speed as a function of workload (that’s the PWM % value from the BIOS), and then configure a multiple point gradient for each of the fans. This is a great step up from what the BIOS offers, missing only one other feature worth suggesting to GIGABYTE - hysteresis. This means that if the system is running warm and slowly cools down, the fans stay running at a high workload to help cool the system down quicker until a threshold is met. So basically this means that as the system heats up it goes up the first gradient, and as the system cools down it goes down a different gradient. 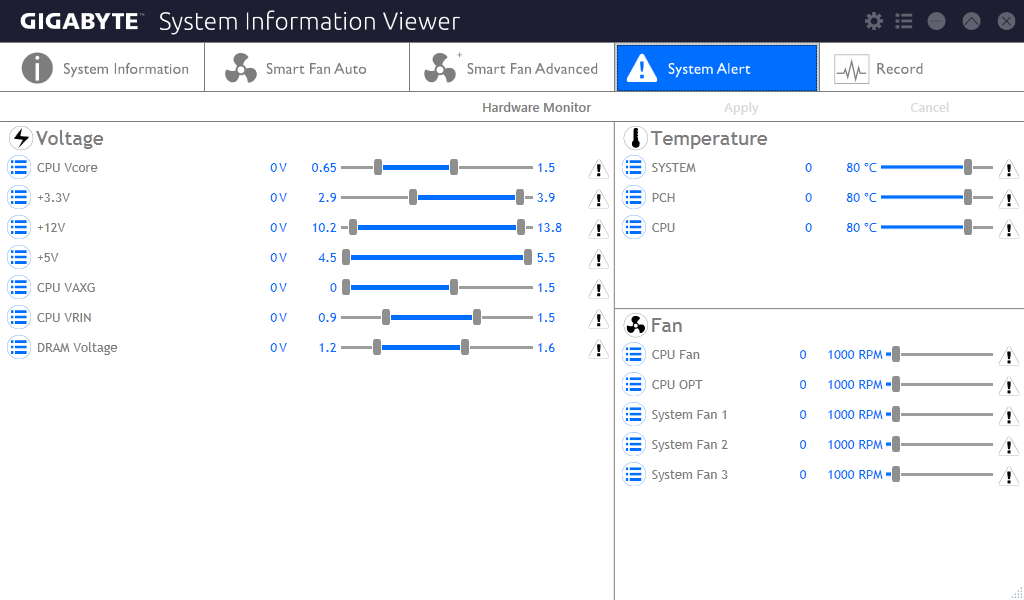 Through this app we can also set the system alerts such that if one of the settings fluctuates beyond a safe range (e.g. temperature of the processor goes above 80) then a notification will appear. This software can also record the values of these sensors over time for a log file. 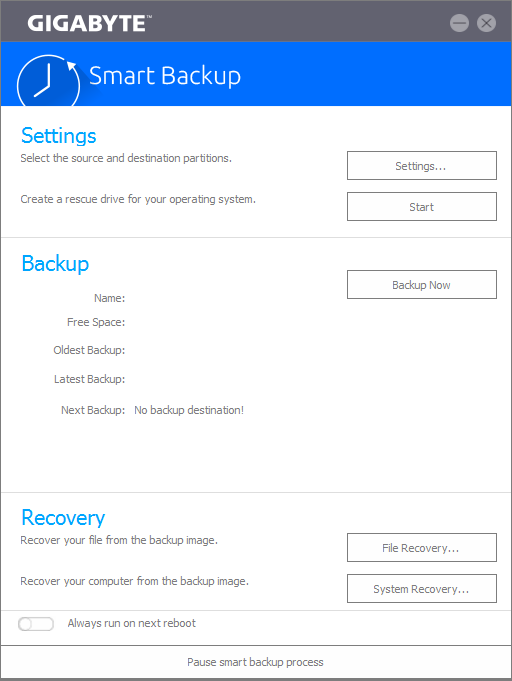 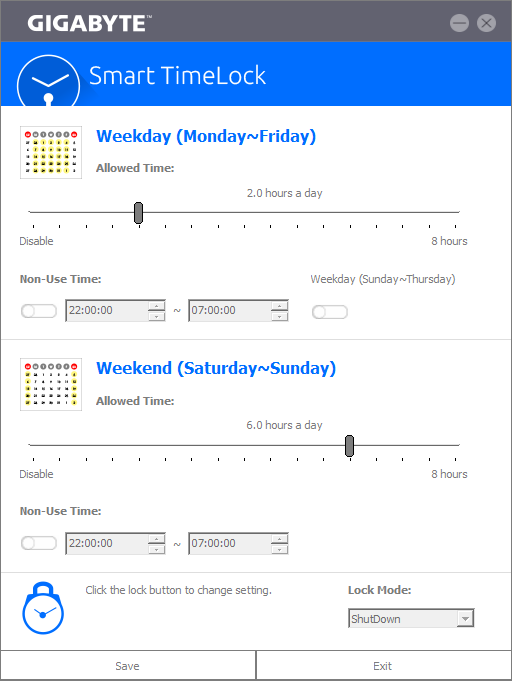 As part of the App Center, GIGABYTE has included a backup utility. This is good for keeping safe copies of hard drive partitions, or rescuing partitions to restore from an early date.

For parents that want to limit the time their children spend on the computer, or for users to limit their complete PC time, the TimeLock option will track the time the PC is on and take necessary steps to limit use after the allotted time. It doesn’t stop anyone rebooting the system with a Linux LiveCD though and accessing the internet through that. 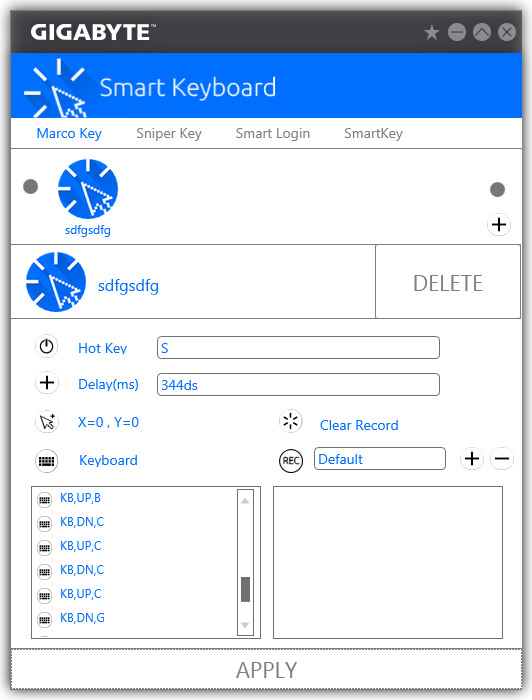 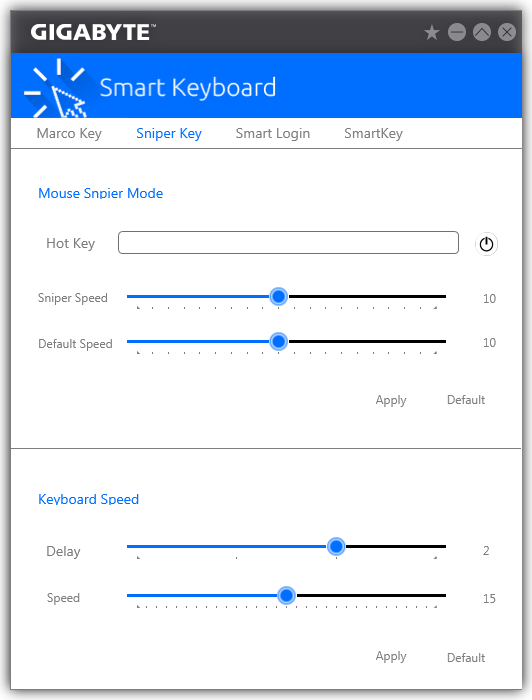 The Smart Keyboard functionality is akin to the macro generator and sniper key apps we saw in previous generations of GIGABYTE software. While it is nice to see, it only remains useful for very simple macros (or Marco, as the text says above in the image).