Initially, television was brought to the personal computer thanks to an add-on TV-tuner card. As TV-tuner and video card technology advanced, the idea of mating these two products into one became a distinct possibility. ATI started this trend with their All-in-Wonder cards which originally included a Rage II+ graphics chip and a TV-tuner on one card. Since then the concept has taken off and the notion of what an All-in-Wonder card should do has evolved.

Springing from the simple idea that watching television on your personal computer could be fun, All-in-Wonder cards now offer functionality far superior to that of a television alone. Today's All-in-Wonder products act as a digital VCR, TIVO, home video editing system, television, and high performance graphics card all in one. We have reported on TV-tuner video cards time and time again and each article we come to the same conclusion: that TV on a PC entertainment is exciting.

Apparently video card manufactures and ourselves are not the only ones who think that turning your PC into a personal video recorder is a good idea. Microsoft recently jumped on the TV-tuner bandwagon with their Windows XP Media Center Edition release announced at the Fall 2002 Intel Developer Forum. As we reported, Widows XP Media Center Edition makes watching television on a PC all the more enticing by including a very user friendly front end while still maintaining Windows XP Professional functionality. 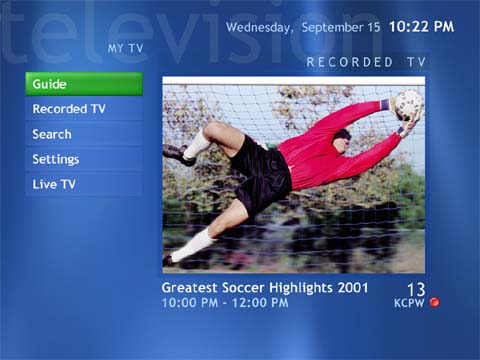