Here are our results from our CPU tests. A reminder of our systems: 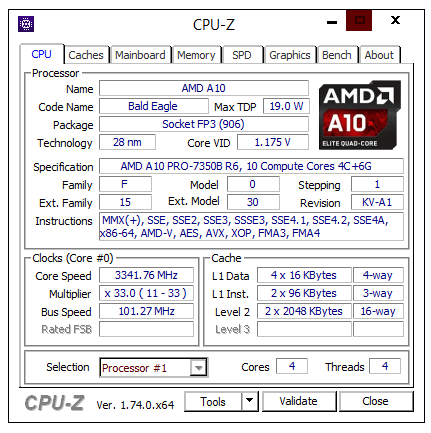 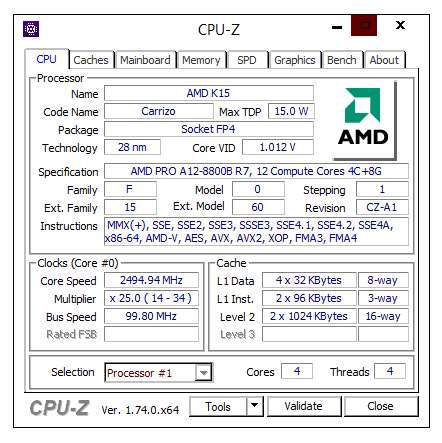 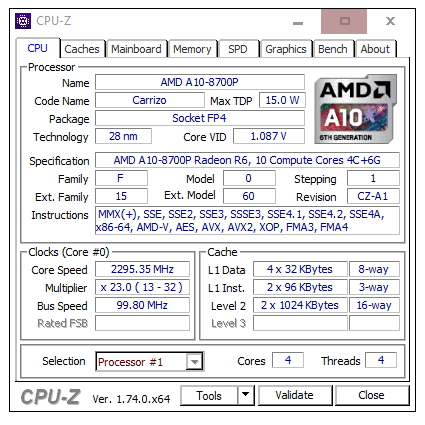 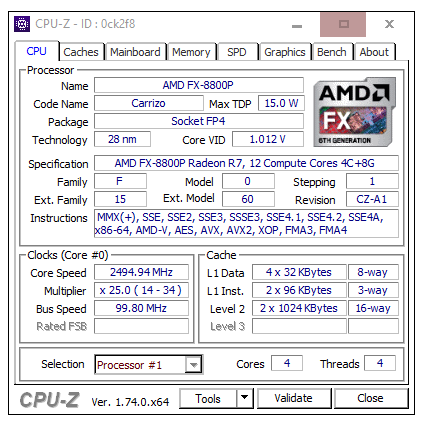 3DPM is a self-penned benchmark, derived from my academic research years looking at particle movement parallelism. The coding for this tool was rough, but emulates the real world in being non-CompSci trained code for a scientific endeavor. The code is unoptimized, but the test uses OpenMP to move particles around a field using one of six 3D movement algorithms in turn, each of which is found in the academic literature. This test is performed in single thread and multithreaded workloads, and uses purely floating point numbers. The code was written in Visual Studio 2008 in Release mode with all optimizations (including fast math and –Ox) enabled. We take the average of six runs in each instance.

In the single threaded mode, the 35W part is able to boost to a higher frequency, giving it the lead. The interesting element here is the mix of 15W and 19W results, putting the Pavilion with the A10-8700P at the bottom. This comes through in the frequency charts, where the Kaveri was able to boost above 3000 MHz often: 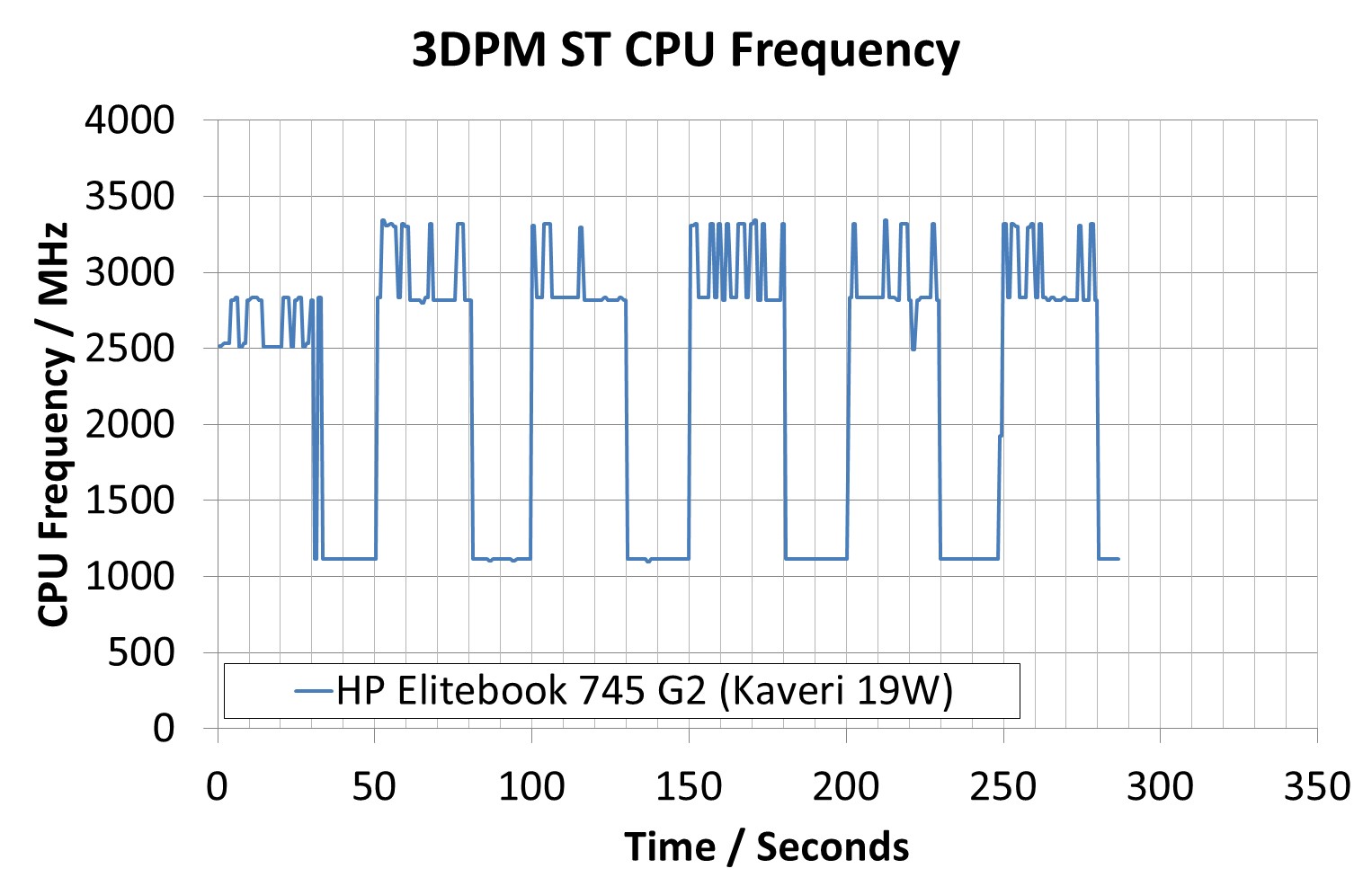 The processors line up more as expected, with the 8800P still taking the top spot with Carrizo’s architecture resources showing the ability to scale better.

WinRAR is a compression tool to reduce file size at the expense of CPU cycles. We use the version that has been a stable part of our benchmark database through 2015, and run the default settings on a 1.52GB directory containing over 2800 files representing a small website with around thirty half-minute videos. We take the average of several runs in this instance.

WinRAR is a benchmark which loves DRAM speed, hence why the dual channel Kaveri system wins despite the increased horse power and thermal benefits of the Lenovo Y700. Unfortunately, the single channel design methodology permeates through the OEMs because of the factor of price and upgradability – if a machine is sold with only one module, it can be upgraded later. The other element is that the Y700 design also caters for Carrizo-L as pin compatible, so despite having two modules in there the system will always be limited to single channel. This is, perhaps, a grave error with any situation that is memory limited.

POV-Ray is a common ray-tracing tool used to generate realistic looking scenes. We've used POV-Ray in its various guises over the years as a good benchmark for performance, as well as a tool on the march to ray-tracing limited immersive environments. We use the built-in multithreaded benchmark.

For whatever reason, our script failed to record the score when it came to the Kaveri system and we only realized after the systems were returned. Nonetheless, the capabilities of the other systems shine through, showing that the A10-8700P can seem to have a big frequency discrepancy against the FX-8800P models. In actual fact this can be attributed to the temperature limitations on the Pavilion: 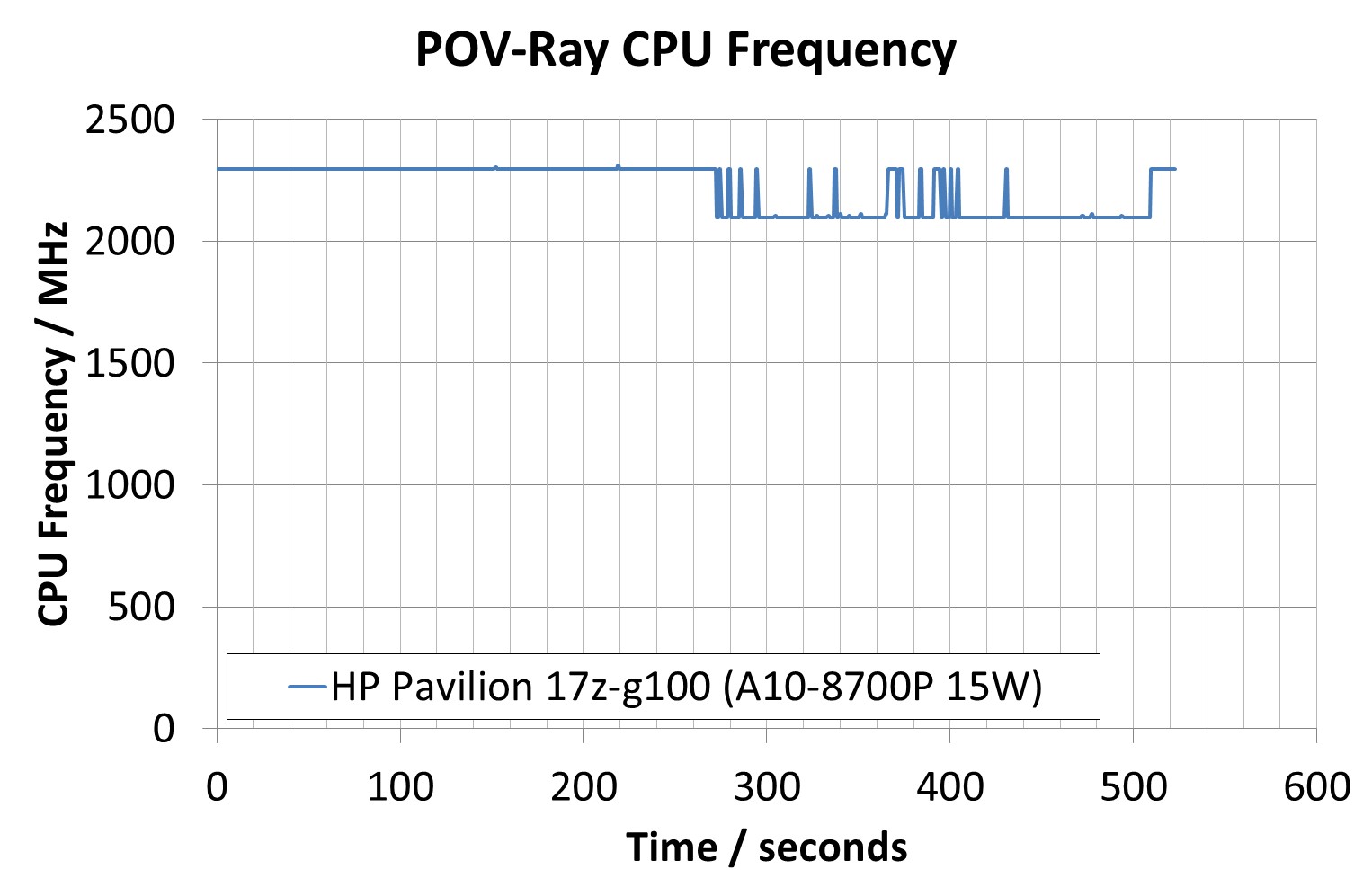 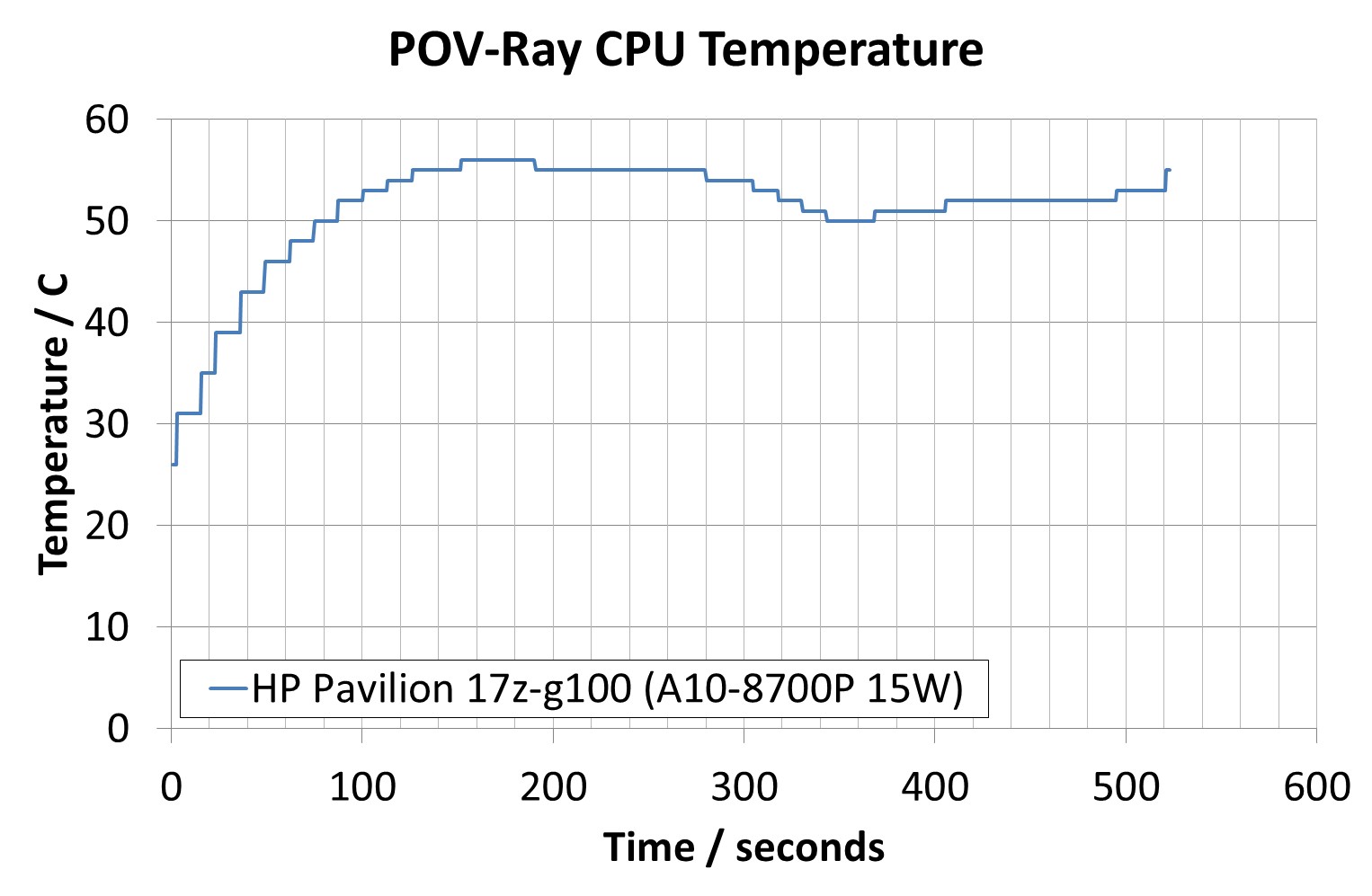 The full threaded nature of POV-Ray means that we’re on the limits of the A10 APU already, but when the system hits 55C or so, it clocks back to 2100 MHz to save a few extra degrees.

If we compare that to the Toshiba: 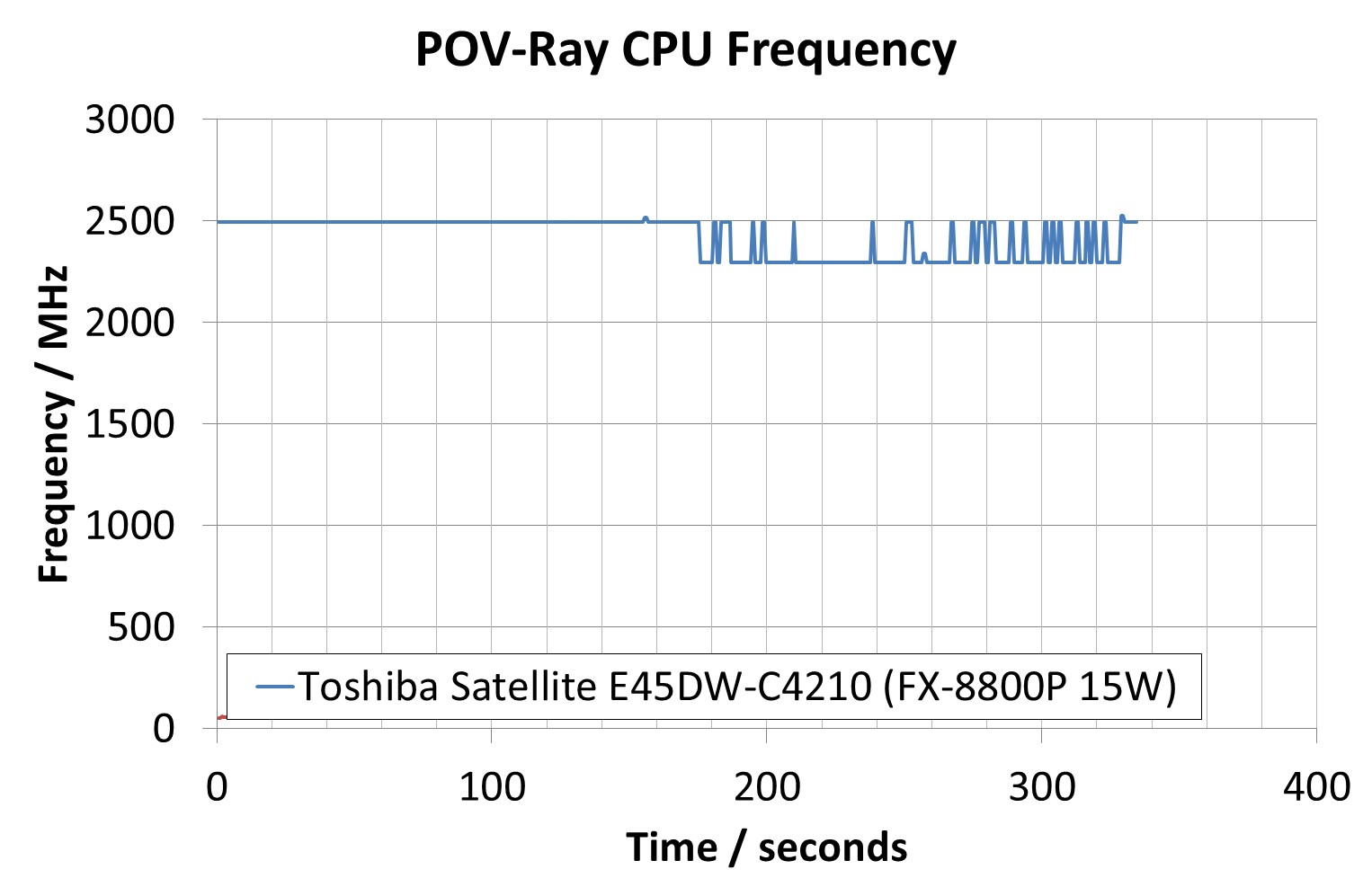 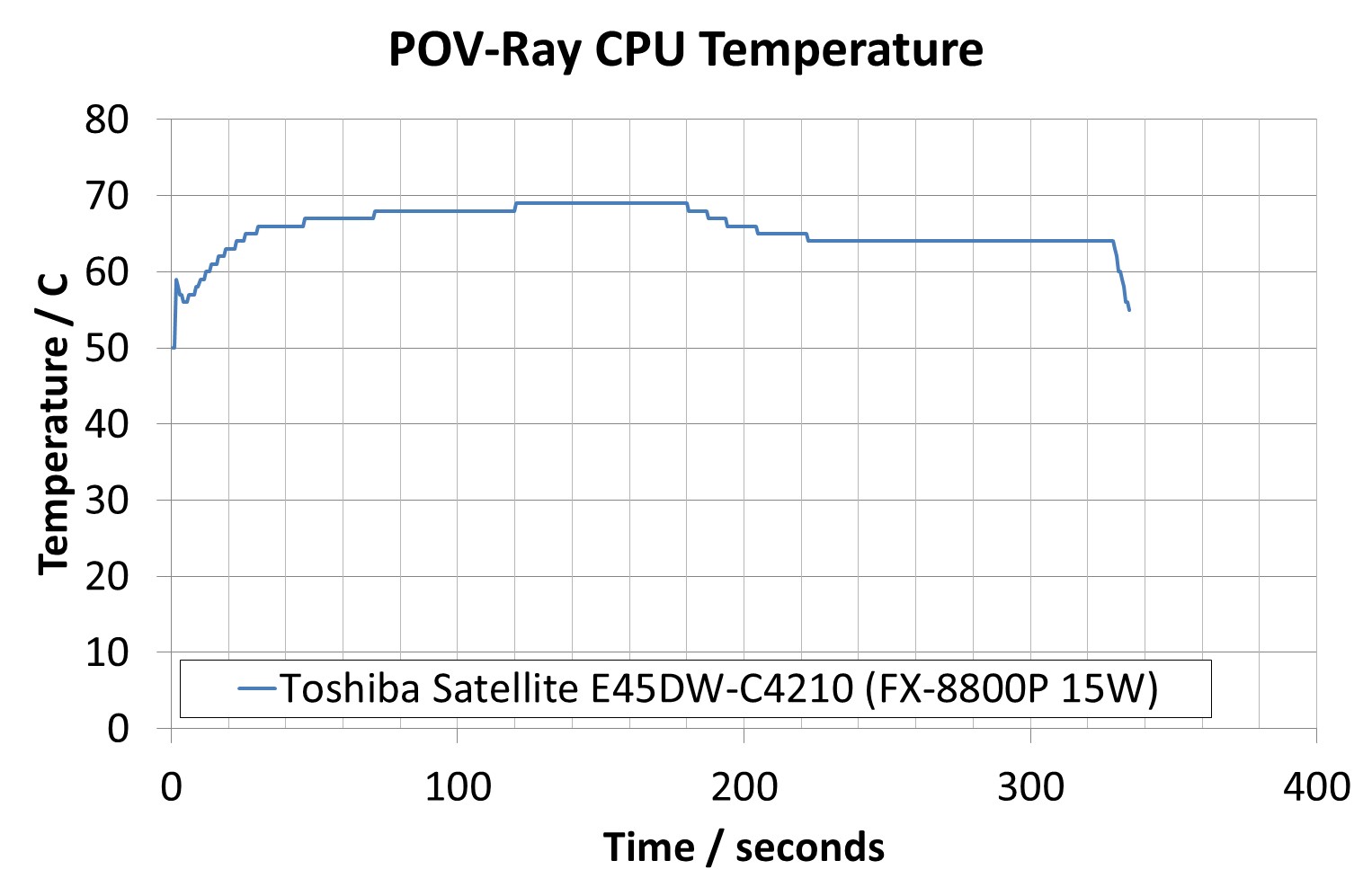 The Toshiba system also hits a temperature limit, but the barrier is way up at 70C, causing the system to knock back to 64C. The CPU frequency difference between the two does not look that different despite the +25% score in favor of the Toshiba, making it slightly deceptive.

HandBrake is a freeware video conversion tool. We use the tool in to process two different videos - first a 'low quality' two hour video at 640x388 resolution to x264, then a 'high quality' ten minute video at 4320x3840. The low quality video scales at lower performance hardware, whereas the buffers required for high-quality can stretch even the biggest processors. At current, this is a CPU only test.

Unfortunately HandBrake also had issues on a couple of systems – the Lenovo and the Toshiba. All the HP systems gave results, where the HP Pavilion came out on top:

If we compare CPU use, the HP Pavilion is much better at using all of its threads than the Elitebook 745 G3: 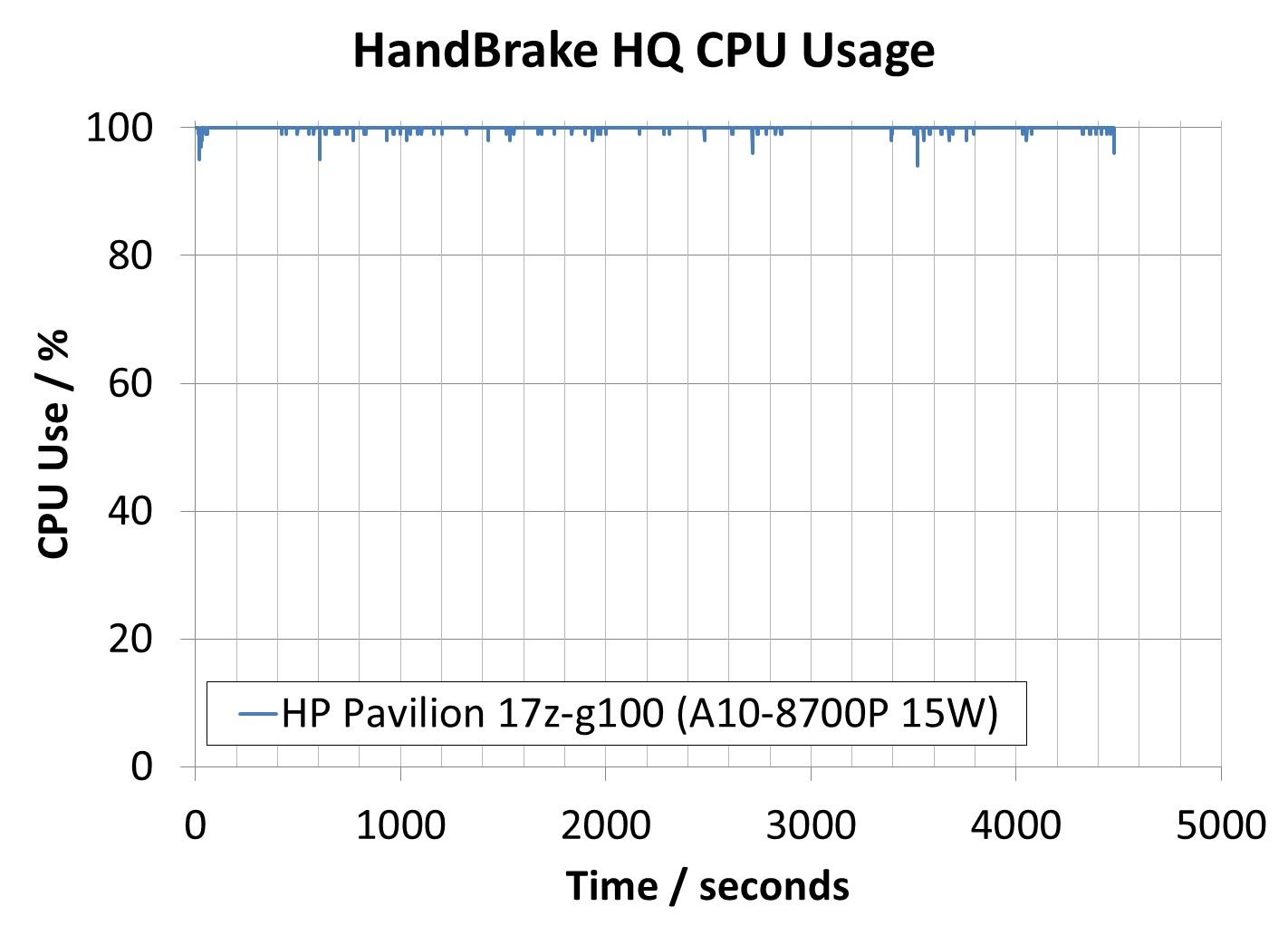 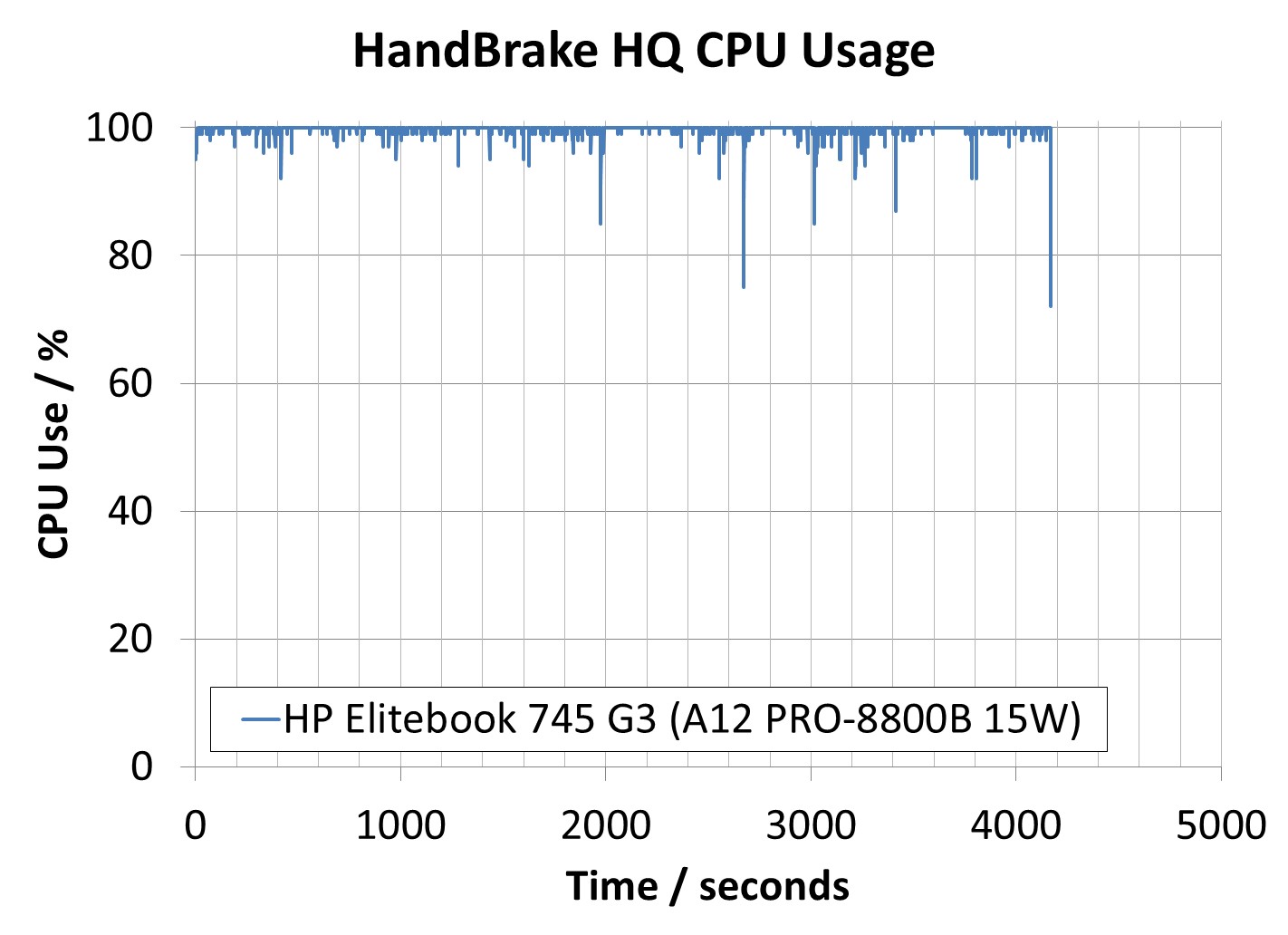 7-Zip is a freeware compression/decompression tool that is widely deployed across the world. We run the included benchmark tool using a 50MB library and take the average of a set of fixed-time results.

Despite being a purely in-memory benchmark, the G2 shows some inefficiency compared to the Carrizo systems. The slight discrepancy between the 8800 and 8700 shows again, and the Y700 can stretch its legs. Interestingly, the Y700 was able to keep its full CPU frequency on all the time: 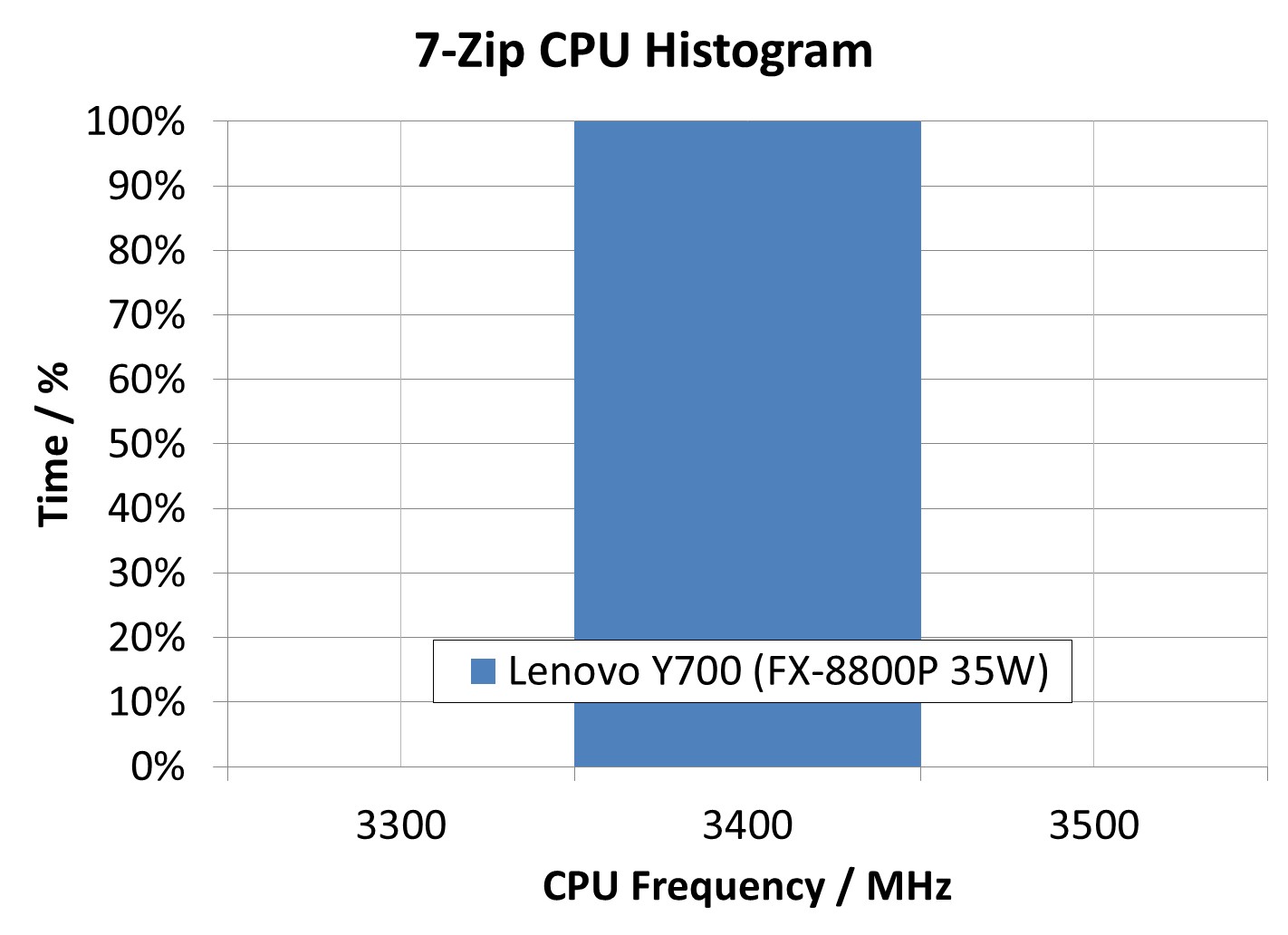 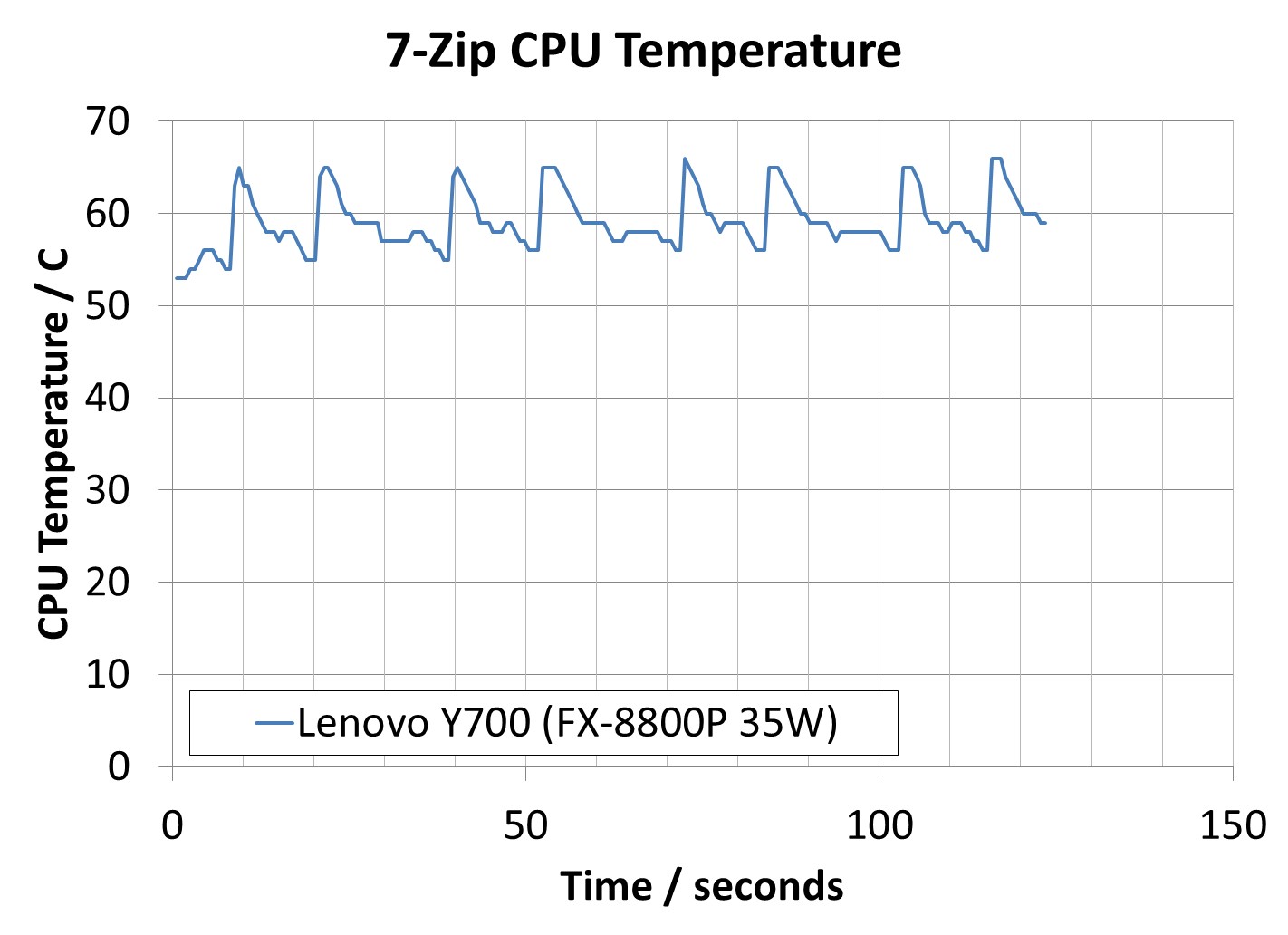 Despite the temperature of the CPU moving between 55C and 65C, the system never once reduced its frequency.