The Cherry MX Board 6.0 Keyboard

A glance at the Cherry MX Board 6.0 reveals a tall, aesthetically simple but very elegant keyboard. The upper body of the keyboard is solid aluminum, a quadrilateral hexahedron with rounded edges. It has a flat top, except from a slight incline where the arrow keys are. There is only one Windows key, to the left side of the Space Bar key. The Windows key to the right side of the Space Bar has been replaced with the FN key, which can be used in conjunction with some of the top row Function keys to initiate special commands, such as sound volume and backlight brightness adjustments. It is interesting to note that the backlighting can be adjusted from 0% to 100% in 1% increments, which is quite a bit overkill in our opinion. 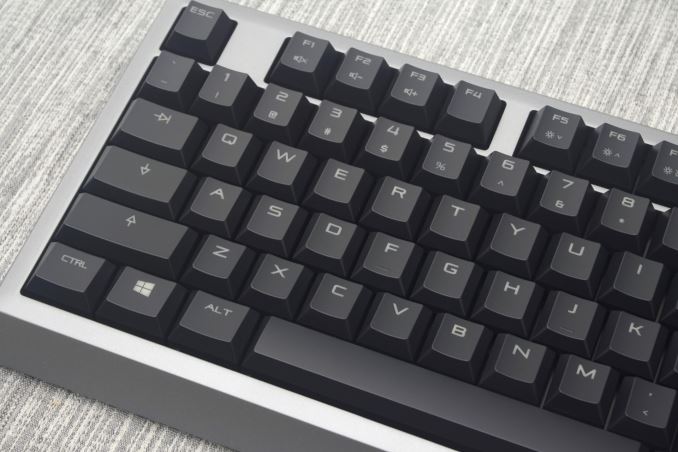 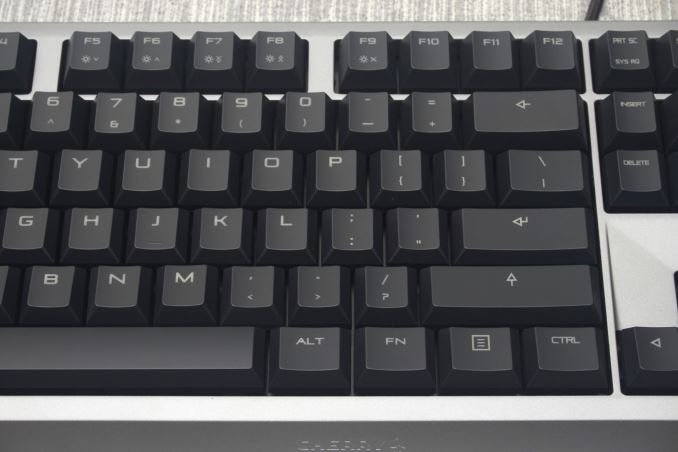 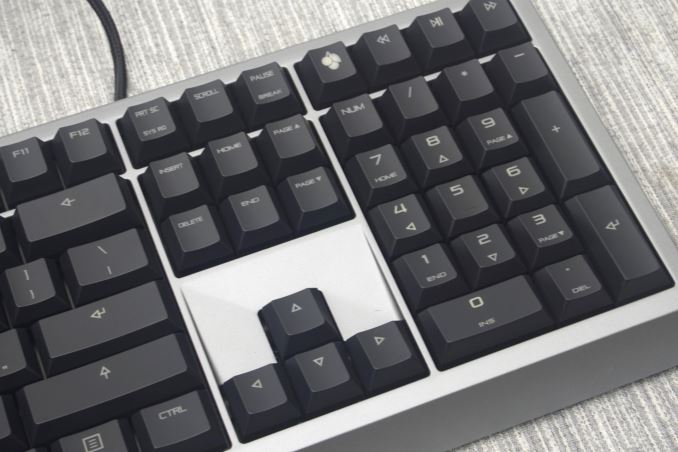 Besides the (mostly) standard 104 keys, there are only four extra keys on the Cherry MX Board 6.0, right above the numpad. One of them is the "Cherry" key that initiates other special functions and the other three are the basic media keys (Play/Pause, Back & Forward). The Cherry key can be used to deactivate the Windows key and certain key combinations (ALT + F4, ALT + TAB, CTRL + ALT + DEL). Once pressed, the backlighting of the Windows key turns blue, indicating that the Windows key and the aforementioned key combinations have been disabled. 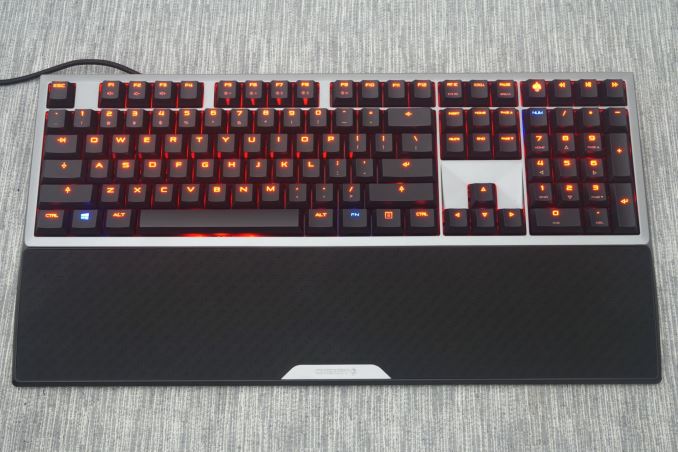 There are no clips or supports for the large wrist rest that comes with the keyboard. The wrist rest is magnetic, making its attachment and removal a breeze. This is particularly useful for users that do not really like the very large size of the wrist rest but do occasionally need one when they need to use the keyboard for a long period of time. The wrist rest is made of corona treated plastic and has a "rubbery" surface that is very soft to the touch, with the "MX" logo patterned across it. The softness and high grip of the surface, alongside the myriads of concavities that the logo pattern creates, make the wrist rest a real grime magnet. Thankfully, it is easily removable and cleanable. 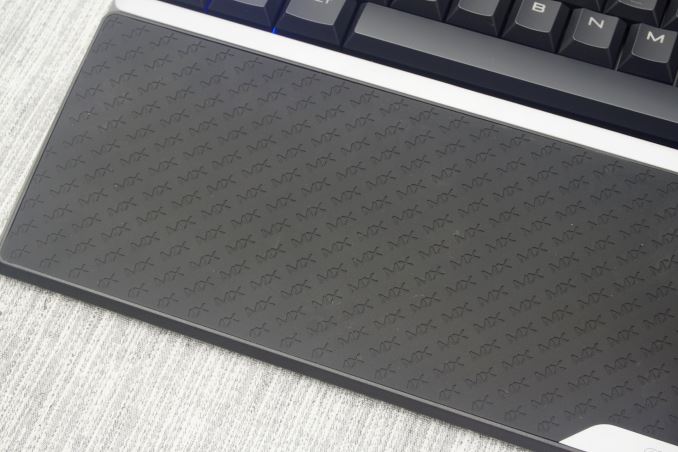 Cherry is using half-height keycaps, with the bottom rows beveled upwards for increased typing comfort. The keycaps are cylindrical, with large main characters and small secondary characters/functions printed on them using a sharp, futuristic font. 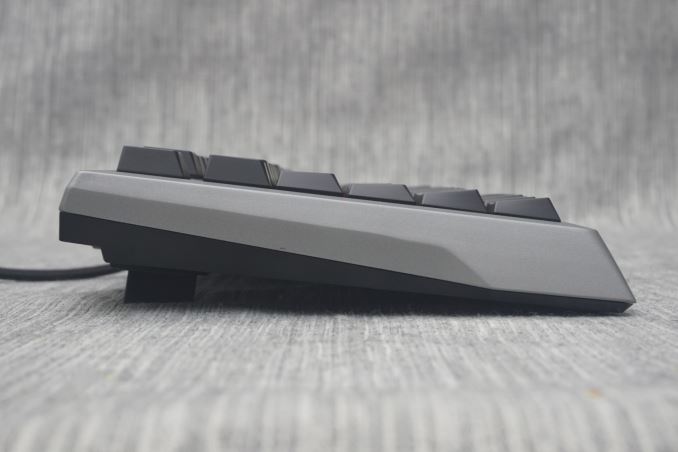 Beneath the keycaps, we of course found Cherry's own switches. Our sample came with the soft and linear Cherry MX Red switches and these are the only switches this keyboard is available with, at least for the time being. 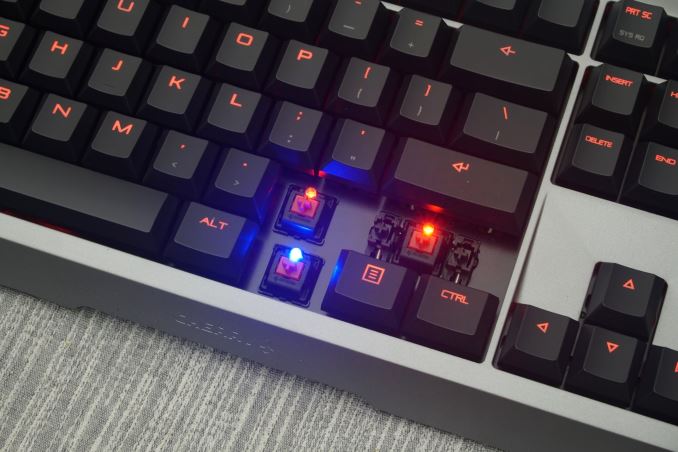 The backlighting of the MX Board 6.0 is exceptionally bright. At its maximum setting, the backlighting is clearly visible even in a sunlit room. It would be intolerable to have the backlighting at maximum inside a dark room or during night time, but it can be easily adjusted with outstanding precision down to the setting a user prefers. Note however that only the main character of keys with secondary functions/characters is being clearly illuminated, as the secondary character is at the bottom of the keycap and the key's axle is blocking the LED's light. All of the keys have only red LEDs, with the exception of five keys (FN, Caps Lock, Num Lock, Scroll Lock & Windows Key) that have a dual blue/red LED. When the three Lock and the FN keys are activated, the backlighting simply turns blue. For the Windows, the blue backlighting oppositely means that it is deactivated.

As we mentioned before, the top cover of the Cherry MX Board 6.0 is made of aluminum. It is very thick, with a minimum thickness of 2.3 mm across the support between the function keys and the main keys. The mechanical strength of the aluminum frame is startling, as it would not bend or twist the slightest bit, even with tens of kg force. It may very wel take the full strength of an average adult to cause any damage to it. 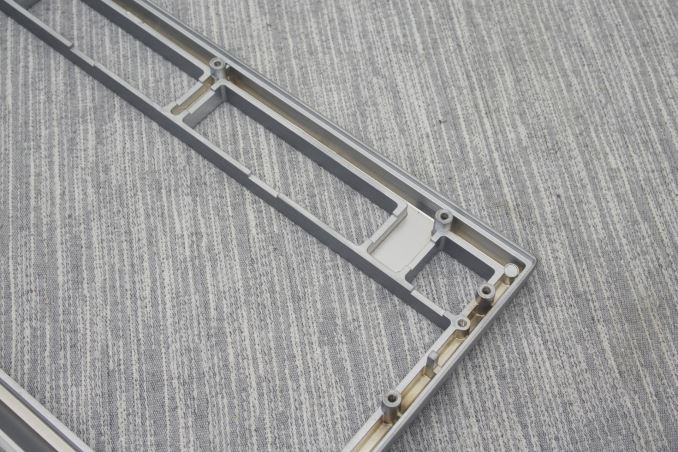 Beneath the aluminum frame, we found a standard keyboard PCB, with the mechanical keys mounted on a steel support frame and soldered directly onto the board. There is nothing special about this, as this is the standard setup inside the vast majority of mechanical keyboards available today.  We could not identify the controller of the keyboard as it is on the other side of the PCB and it would take a fair time of de-soldering to get to it, but it does not really matter in this case, as the Board MX 6.0 keyboard has very few extra functions and it is not reprogrammable.