Usage of the Compute Stick as an entertainment platform is promoted by Intel as one of the use-cases. It is a bit surprising (given the form factor) that the Compute Stick has a fan. In this aspect, the Cherry Trail unit is no different from the Bay Trail unit. Subjectively, I was not comfortable with the acoustics in a 'office scenario' with the Compute Stick at the base of the monitor (connected via the HDMI extender cable) and myself seated around 70 cms. from it. The small diameter of the fan makes for a whining high-pitched noise, and it is compounded by the fact that it starts and stops depending on the SoC load.

Objectively speaking, Intel provided an acoustics rating of 28 dB at 1m distance for the noisiest mode. If the Compute Stick were to be hidden behind the TV, it is unlikely that users can hear such low noise at typical television viewing distances. It is not ideal, but Intel indicated that the performance of the device needs proper thermals. In order to to balance the very small size along with overall cost and performance, they decided to retain a small fan as the optimal thermal solution. Now that we have got the acoustics out of the way, let us move on to the other HTPC aspects.

Starting with Haswell, Intel, AMD and NVIDIA have been on par with respect to display refresh rate accuracy. The most important refresh rate for videophiles is obviously 23.976 Hz (the 23 Hz setting). As expected, the Intel PPSTK1AW32SC has no trouble with refreshing the display appropriately in this setting. It actually performs better than the Bay Trail unit in this respect. 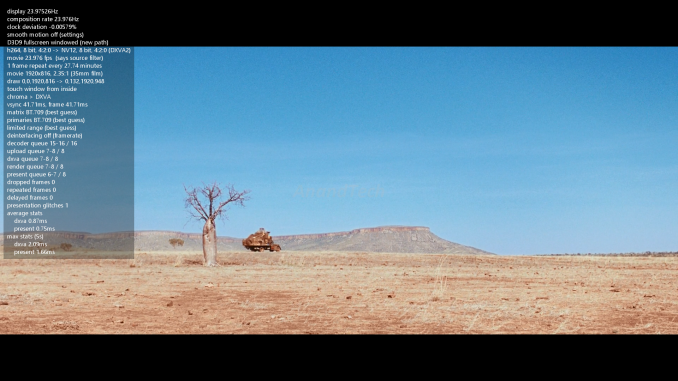 Evaluation of OTT playback efficiency was done by playing back our standard YouTube test stream and five minutes from our standard Netflix test title. Using HTML5, the YouTube stream plays back a 720p encoding. Since YouTube now defaults to HTML5 for video playback, we have stopped evaluating Adobe Flash acceleration. Note that only NVIDIA exposes GPU and VPU loads separately. Both Intel and AMD bundle the decoder load along with the GPU load. The following two graphs show the power consumption at the wall for playback of the HTML5 stream in Mozilla Firefox (v 43.0.4). 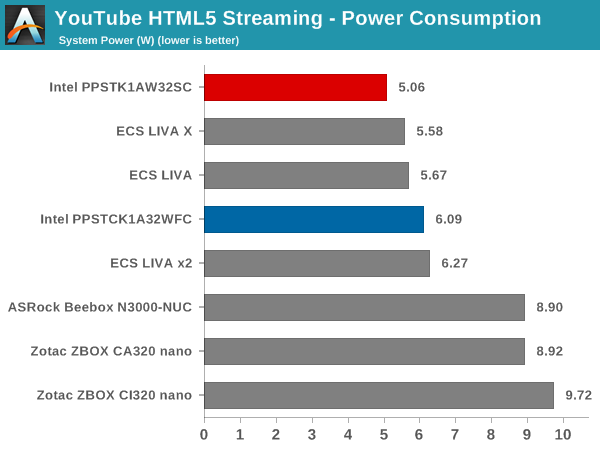 GPU load was around 37.44% for the YouTube HTML5 stream and 11.14% for the steady state 6 Mbps Netflix streaming case.

Netflix streaming evaluation was done using the Windows 10 Netflix app. Manual stream selection is available (Ctrl-Alt-Shift-S) and debug information / statistics can also be viewed (Ctrl-Alt-Shift-D). Statistics collected for the YouTube streaming experiment were also collected here. While YouTube was more power efficient on the Cherry Trail Compute Stick, the Netflix case is the other way round. However, the numbers taken standalone do point to the Compute Stick units being a very power efficient platform for OTT streaming. 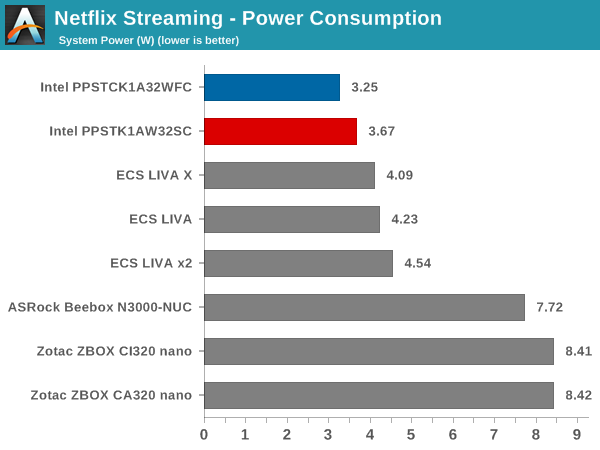 The form factor of the Compute Stick and the internal components make it clear that consumers are not going to play back videos using the madVR renderer. Instead, it is highly likely that Kodi will be used as the interface for media playback. We evaluated performance under MPC-HC + EVR-CP and Kodi 16.0 (Beta 5) for our test suite. Prior to those results, let us take a look at the codecs that are hardware-accelerated by the Cherry Trail SoC. 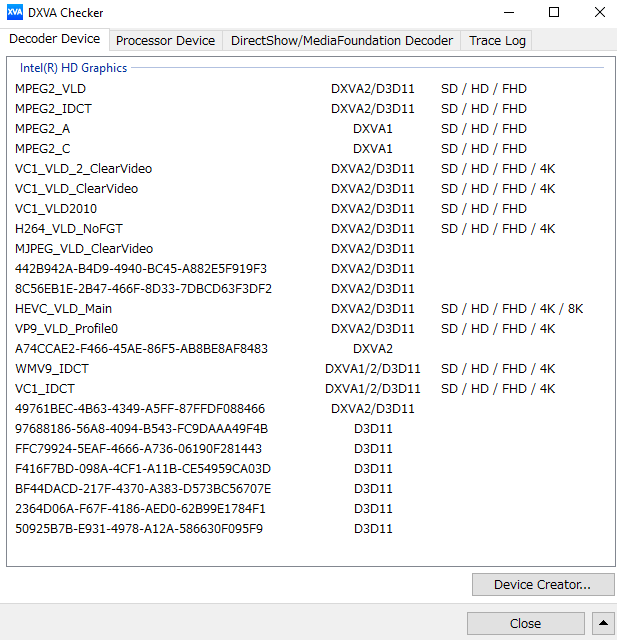 As expected, we have acceleration for MPEG-2, VC1, WMV9 and H.264. Interestingly, we also have support for HEVC (8-bit) and VP9 hardware-accelerated decoding in the upgraded GPU.

Frame drops are evident whenever the GPU load consistently stays above the 85 - 90% mark. In addition to tracking that aspect in the graphs below, we also get an idea of the system's power efficiency for decode and playback of some common codecs. 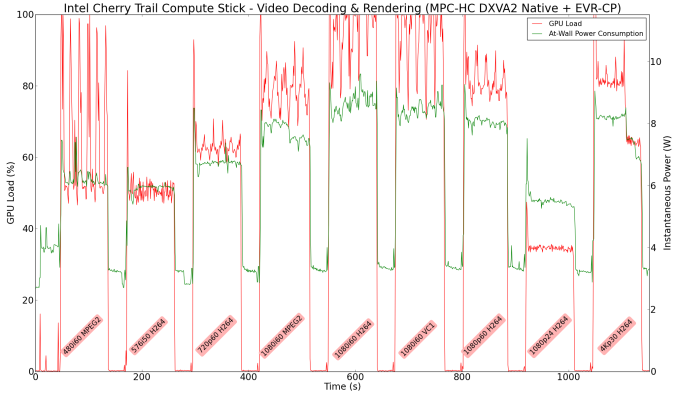 The above graph suggests that the Compute Stick is likely to drop frames when deinterlacing of high frame rate content is required. It is possible that EVR, the native renderer, will perform better than EVR-CP. 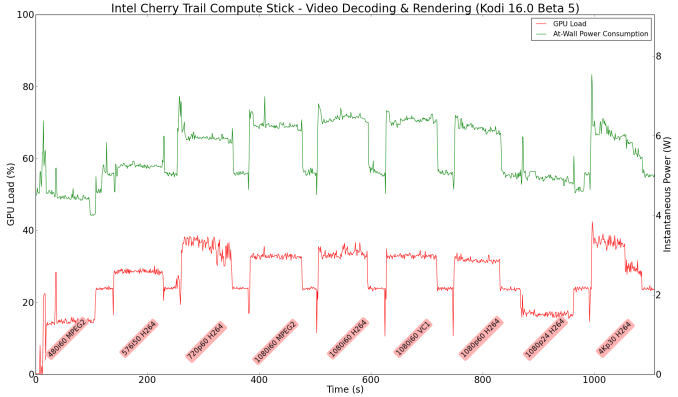 Kodi doesn't deinterlace content by default - so, the GPU load never goes unreasonably high. In the Bay Trail Compute Stick, Kodi struggled with the 1080i60 streams. Another aspect to observe with Kodi is that 'idling' at the XBMC interface consumes around 25% of the GPU resources and the power penalty is around 5 W. Depending on the codec and frame rate, the GPU load and power consumption might be lower or higher than the 'idle' state. For example, 480i60 and 1080p24 videos play back within the 5 W power envelop.

As of January 2016, the Intel graphics drivers for Cherry Trail (32-bit) have support only for bitstreaming of DTS, Dolby Digital and Dolby Digital Plus. This means that Netflix and other similar OTT sites are in the clear. However, users hoping to take advantage of lossless HD audio in Blu-ray backups are going to be disappointed. However, given the other limitations of the form factor and the system, it is unlikely that the absence of HD audio bitstreaming will bother too many consumers.