Continuing to the battery life benchmarks we should expect the Mate 8 to perform very well, thanks to the high efficiency of the Kirin 950, an LCD screen as well as the 4000mAh / 15.2Wh large battery. 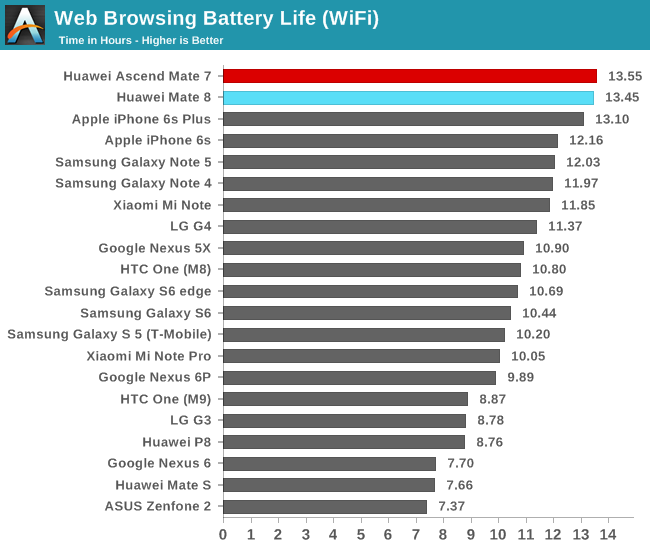 Starting off with our WiFi web-browsing test we see the Mate 8 just get short of 13.5h of battery life. The interesting comparison is here to last year’s Mate 7 as it seems the actually last just as much. This may point out that the screen efficiency measured in our display power testing was maybe correct and the Mate 8 is less efficient. Another aspect is that the Mate 8’s overall platform power consumption hasn’t seen much improvement and thus still represents a large barrier for battery life. 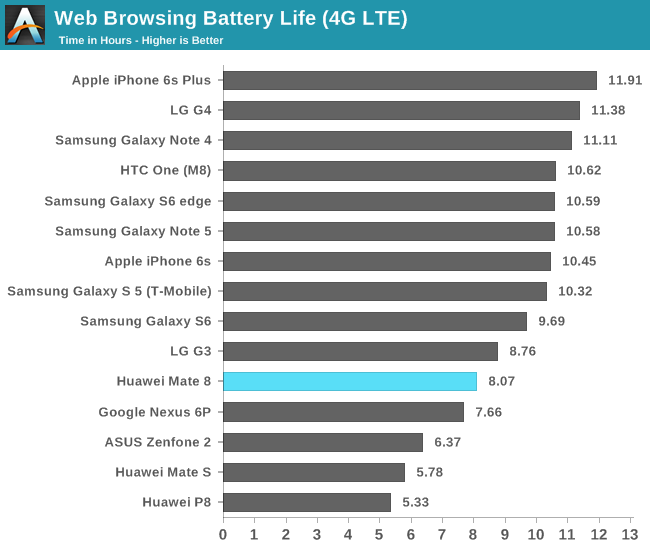 On the 4G LTE test we see that the Mate 8 loses out its advantage over the competition. Again I’m testing under rather mediocre signal conditions so it’s not a valid apples-to-apples comparison to devices reviewed by Joshua or Brandon, however when comparing it against for example such as the Nexus 6P which was tested under the same conditions we see that the Mate 8 faces a much larger battery life degradation going from the WiFi to the LTE test. The reason for this can only be that the Kirin 950’s modem and RF back-end just aren’t as efficient as Qualcomm or even Samsung’s. 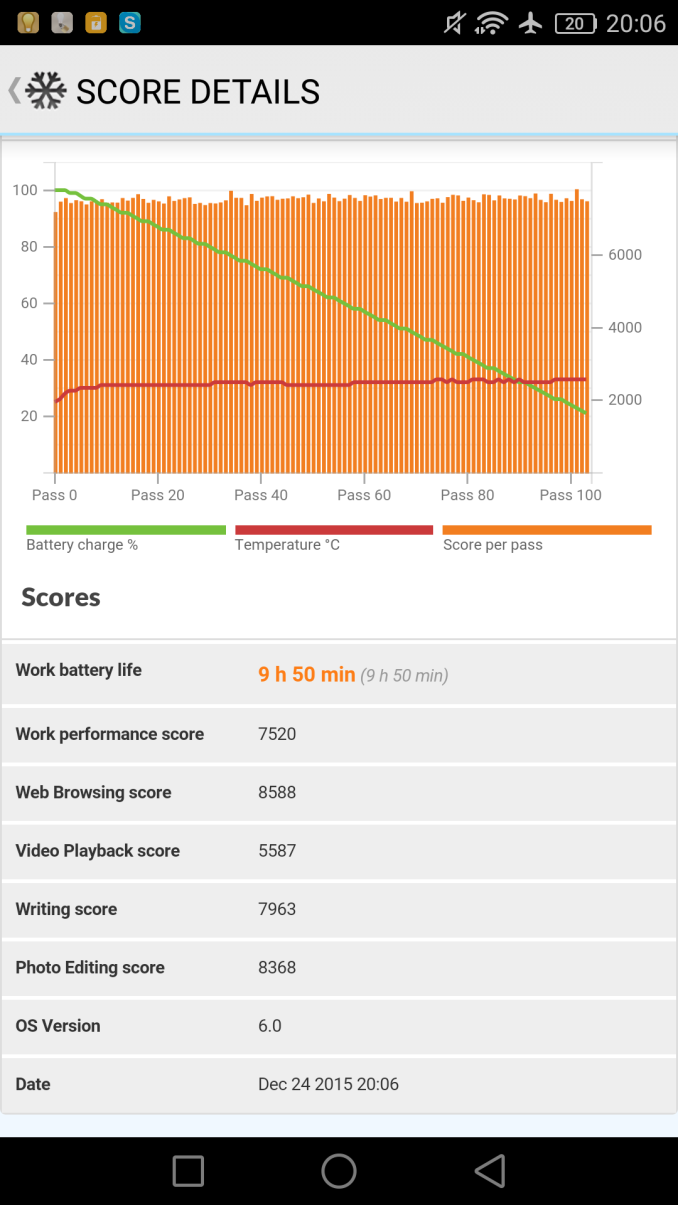 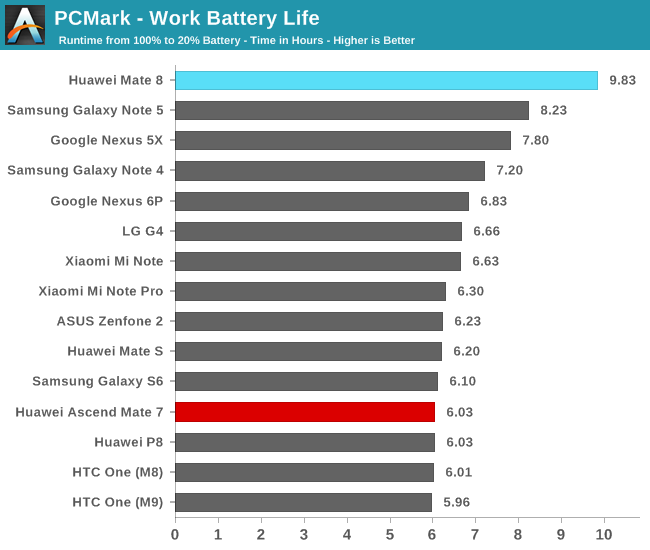 While the web-browsing tests didn’t represent a large improvement for the Mate 8, we see PCMark put the phablet as the current undisputed leader among high-performance devices. Here the difference to the Mate 7 is almost 4 hours, or around a 65% increase in battery life. The increase is most certainly linked to the new SoC’s power efficiency. 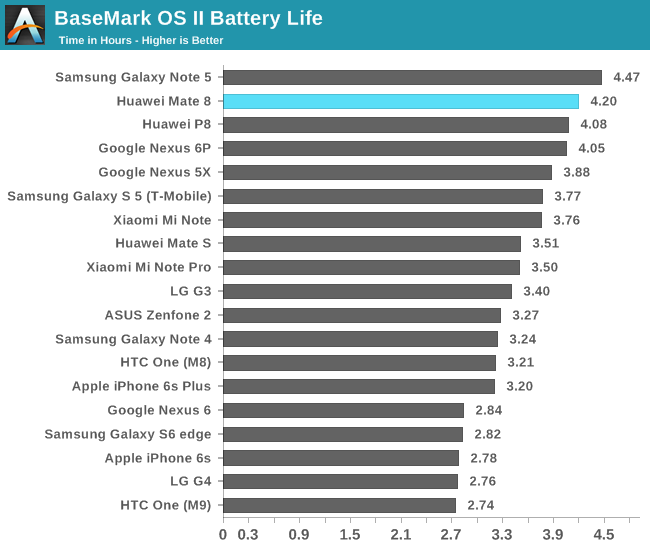 BaseMark OS II’s battery test is more of a maximum load type test that depends on the allowed maximum TDP of the phone. With a 15.2Wh battery and a runtime of 4.2h we see an average consumption of 3.6W, roughly the same amount of power that I saw that the device was able to sustain in our CPU thermal test. 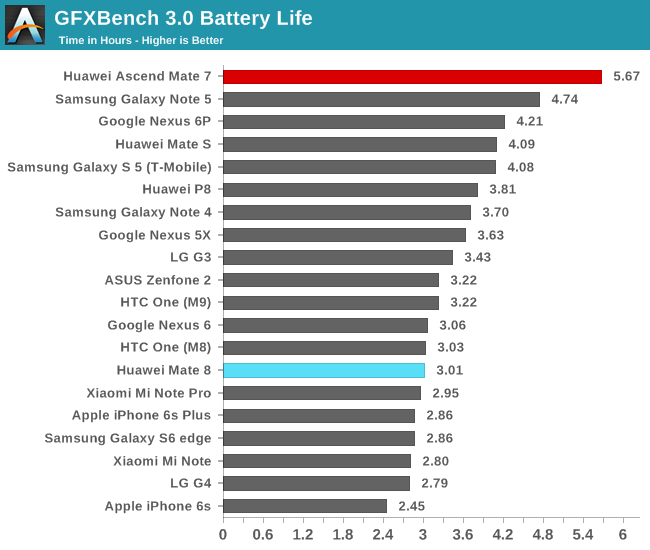 At 200 nits the Mate 8 averages an idle power consumption of 989mW and we saw that system load power for the T-Rex test is 3.64W. 3 hours battery runtime averages 5W of power, near the 4.6W we theorized. The small difference may be due to the overhead of actually running the on-screen test and thus also not able to show the DDIC’s savings thanks to PSR due to continuously changing screen content.

Overall I’ve been extremely impressed by the Mate 8’s battery life. In everyday usage this is the longest-lasting device I’ve had the opportunity to use. The Kirin 950’s efficiency is outstanding and is truly able to earn its place among the top for this generation. It seems the Mate 8’s limiting factors are related to the screen and general platform base power consumption, something that Huawei may be able to improve in future devices and thus get even better value out of the Kirin 950.

All being said, if you’re looking for a long-lasting device, you can’t go wrong with the Mate 8.

The Mate 8 advertises fast charging out of the box so that even considering it having a large 4000mAh battery, it should still be fast to fill up when in need. The stock charger is a 9V/2A (18W) unit. I’m not sure if the charging enumeration protocol is based on Quick Charge or Adaptive Fast Charging, but it was able to enable fast-charging on Samsung phones while the Mate 8 didn’t fast-charge on Samsung’s charger, meaning the Huawei charger is likely a Quick Charge unit and the Mate 8’s PMIC and voltage negotiation IC seems to only accept Quick Charge. 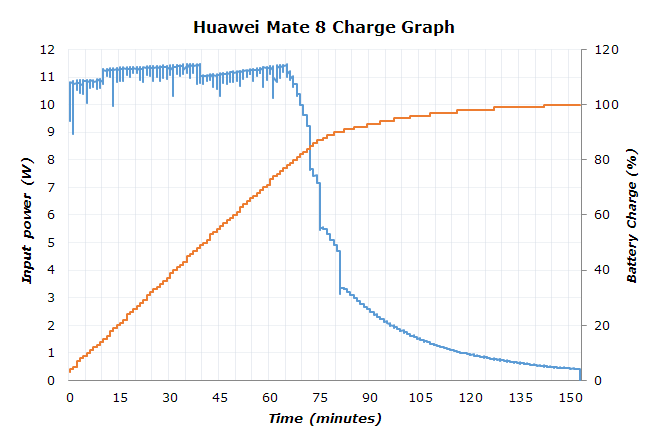 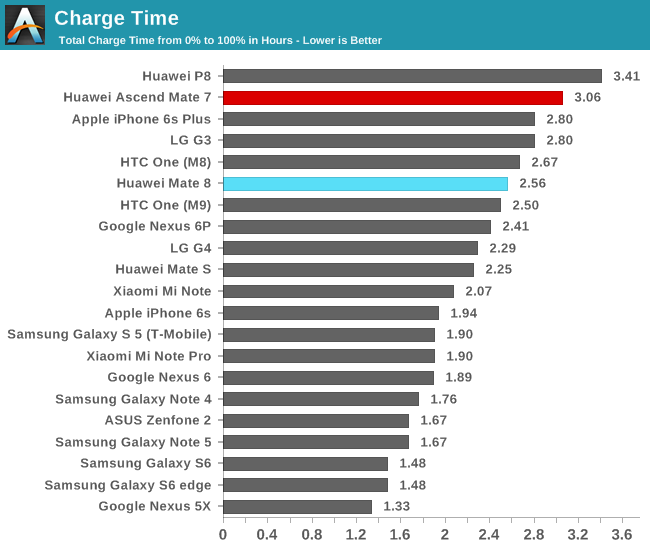 As we see in the charge graph, the Mate 8’s battery cell gets charged at up to 11.5W during the fast-charging phase, being able to reach 80% in 68 minutes around little under 40% charge for each half hour of charging. The last 20% takes up to another 70 minutes as the device switches over to trickle-charging.

While the Mate 8 ends up with total charge time of 2.56 hours, what counts is that the initial 80% of battery capacity can be charged very fast so the Mate 8 is no slouch in this metric.