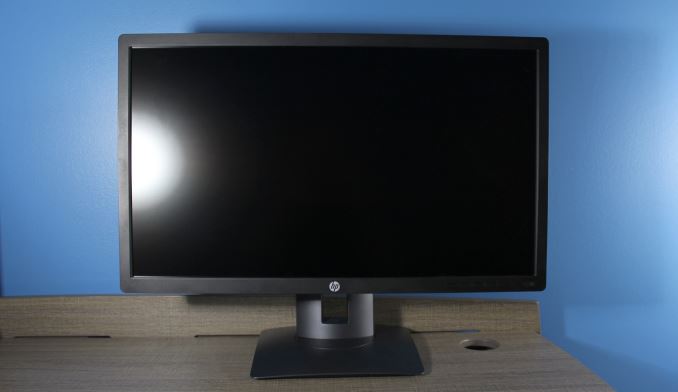 Almost a year ago, we reviewed the HP Z27x monitor, which was a 27-inch display capable of covering a very wide gamut. It had a reasonable 2560x1440 resolution, which was pretty common for this size of display. But at CES 2015, HP announced the HP Z27q monitor, which takes a step back on gamut and manageability, but takes two steps forward with resolution. The HP Z27q is a '5K’ display, which means it has an impressive 5120x2880 resolution. This easily passes the UHD or '4K' levels which are becoming more popular. The HP Z27q is one of a handful of 5K displays on the market now, and HP came in with a pretty low launch price of $1300. When I say pretty low, it’s of course relative to the other 5K displays in the market, but it undercuts the Dell UP2715K by several hundred dollars, even today. 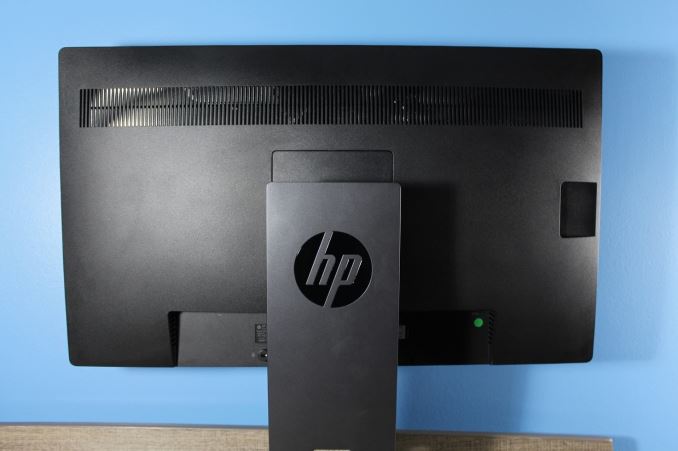 The Z27q lacks some of the management capabilities of it’s Z27x brethren, but it still packs in some powerful features. This is a full 10-bit panel, so it can display 1.07 billion colors. It features a 14-bit 3D Look-Up Table (LUT), and it has settings for both the standard sRGB color space and the wider AdobeRGB color space. It does drop the wide-gamut of the Z27x, which had support for Rec. 2020 (although it can’t reach the full gamut), and there is no option for DCI either. There is an option for BT.709 though, if you need it.

Due to the high resolution, there is no option for HDMI or DVI input. The only inputs are the two DisplayPort connectors required to drive this monitor. As a refresher, DisplayPort 1.2, which is the current standard, has enough bandwidth to run UHD, or 3840x2160 content at 60Hz. In order to drive 5K, or 5120x2800, which is 14.7 million pixels, two DisplayPort 1.2 outputs are tied together to form a single display. 4K and 5K sound awfully similar, but 5K has 78% more pixels than 4K. It takes a lot of bandwidth to drive this. HP does offer a USB hub built in, and it is USB 3.0. The hub has two USB ports on the back of the display, and another two on the left side.

HP uses a pretty decent on-screen display which can be set to either icons or text. I prefer the text mode, but regardless of how you use it, it offers an easy way to set up the color space, adjust the brightness, and set the individual color channels as needed. Since there are no extra inputs, the menu itself is pretty simple.

Pressing any of the buttons opens up the On-Screen Display, and once opened, the bottom of the OSD shows what each button will do. You can set the device to automatically power off and on at certain times of the day, as well as set the target color range. Brightness is of course one of the quick adjustments. You can also check out the input to ensure that you are running at the correct resolution. There are a lot less options here than some monitors, only because there is really only the one input, where as most lower resolution panels may offer selection of any of the inputs and adjustments for each.

All in all, the OSD design is good enough to get the job done. Once configured, you likely won't be in there much.

The design of the HP Z27q is fairly pedestrian, with the monitor built out of flat black plastic. The HP logo is unobtrusive in the centre, and the on-screen menu options are on the right side. If you were wondering how HP was able to undercut the competition, this is one of the areas where they have saved some money. 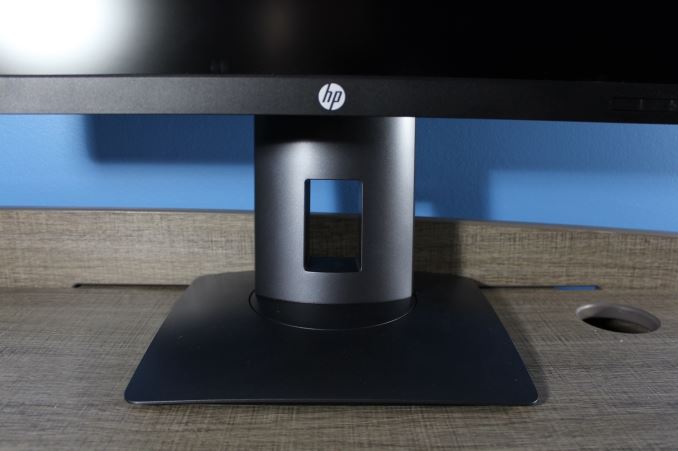 The stand easily blends into the background - it is made out of the same plastic material, but it is a fully featured stand. There is tilt, swivel, and height adjustments available. Cable management is a bit sparse, with just a single rectangular slot at the bottom of the stand to route the cables through. If you use the display at maximum height, all of the cables are going to be exposed here, so some more cable management options would be nice, but in the end it’s functional.

The bottom of the display houses the two DisplayPort inputs, as well as a USB 3.0 input, which then branches off to two USB 3.0 ports on the bottom, and two on the left side.

Although the Z27q is just a plain black monitor, the design is very functional, with plenty of adjustments available to suit pretty much any workspace. If the stand is not of your liking, you can of course mount it using a standard VESA mount as well.