Wrapping things up, after Qualcomm’s experiences with the Snapdragon 810 (and to a lesser extent the 808), the company has a lot to do if they wish to recapture their grip on the high-end SoC market, and less time than they’d like to do it. What has happened with the 810 is now in the past, but to recover Qualcomm needs to show they can correct their mistakes and produce a new generation of chips as well designed as the 800/801. And they need to do so at a particularly sensitive time when customer/competitor/supplier Samsung has fully ramped up their own SoC CPU design team, which presents yet more of a challenge to Qualcomm.

As is always the case with these MDP previews, it’s critical to note that we’re looking at an early device with unoptimized software. And at the same time that we’re looking at a device and scenario where Qualcomm is looking to show off their new SoC in the best light possible. Which is to say that between now and retail devices there’s room for performance to grow and performance to shrink depending on what happens with software, thermal management, and more. However at least in the case of the Snapdragon 820 MDP/S preview, I am hopeful that our experiences here will more closely mirror retail devices since we’re looking at a phablet form factor device and not a full-size tablet has was the case in the past couple of generations. 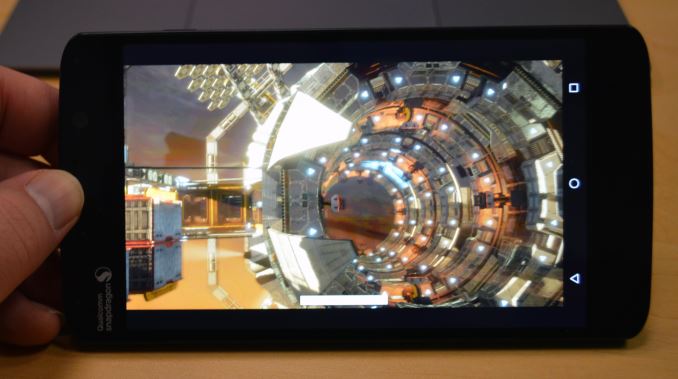 To that end, then, Snapdragon 820 looks like Qualcomm has regained their orientation. Performance is improved over 810 – usually greatly so – at both the CPU and GPU level. And for what it’s worth, while we don’t have extensive temperature/clockspeed logs from the MDP/S, at no point did the device get hot to the touch or leave us with the impression that it was heavily throttling to avoid getting hot to the touch. Power consumption and especially efficiency (Performance/W) is clearly going to be important consideration on 820 after everyone’s experiences with 810, and while we’ll have to see what the retail devices are like, after what Samsung was able to do in their own transition from 20nm to 14nm FinFET, I feel it bodes well for Qualcomm as well.

Meanwhile more broadly speaking, our initial data doesn’t paint Snapdragon 820 as the SoC that is going to dethrone Apple’s commanding lead in ARM CPU performance. Even if retail devices improve performance, Apple A9/Twister’s performance lead in CPU-bound scenarios is extensive (particularly in lightly-threaded scenarios), more so than I’d expect any kind of software refinements to close. What seems to be rather concerning is the performance of existing software that isn't yet optimized for the new architecture, well have to see how targeted compilers for Kryo will be able to improve scores in that regard. The Adreno 530 on the other hand looks to to perform very well for a smartphone SoC, besting Apple's latest, and I think there’s a good chance for retail devices to hold their edge here.

Otherwise within the Android SoC space, the big wildcards right now are ARM’s Cortex-A72 and Samsung’s forthcoming M1 CPU. Initial performance estimates of the A72 don't put it very far from Kryo, and given that we'll be seeing some very high clocked SoCs such as the Kirin 950 at 2.3GHz or MediaTek's X20 at 2.5GHz, Qualcomm will seem to have some competition in terms of CPU performance. With the former ARM is striving for performance gains rather similar to what we’ve seen with Snapdragon 820, and Samsung's CPU is still a complete mystery at the moment. Even with their significant gains over the Snapdragon 810, if Kryo is to beat A72 and M1, then I don’t expect it will be an easy win for Qualcomm.