Although the Skylake U-series processors were announced a while ago, until now we’ve yet to get our hands on any devices that are actually shipping with it. Much like the Surface 3, Microsoft is one of the first out of the gate with a new processor from Intel which I think is a good sign for the future. If you want to check out all of the details of Skylake-U, check out the architecture analysis here.

The Surface Pro 4 model that I was sampled has the middle-tier processor which I think is going to be the most popular one with customers. The i5-6300U is a dual-core processor with Hyperthreading, and it has a 2.4 GHz base frequency with turbo up to 3 GHz. Being a U-series processor, it has a TDP of 15 Watts.

The Surface Pro 4 was run through our standard notebook workloads and we can compare some of the scores to tablets as well. Ultimately there just are not enough good cross platform Windows and Android/iOS benchmarks to get a great feel for general system performance versus tablets not running Windows, but we will show what we can.

To compare the Surface 4 to other tablets' CPU performance we have the various web based browser tests. These are not always the greatest because JavaScript performance is heavily dependent on the browser used, but they none-the-less represent a collection of common functions that browsers excute from phone to desktop and everything in between. We’ve generally used the latest version of Google Chrome for our web tests since Internet Explorer has very poor JavaScript performance, but with the release of Windows 10 I’ve moved over to Microsoft Edge. It generally performs as well or better than Chrome with the exception of the WebXPRT test where it is a bit behind. 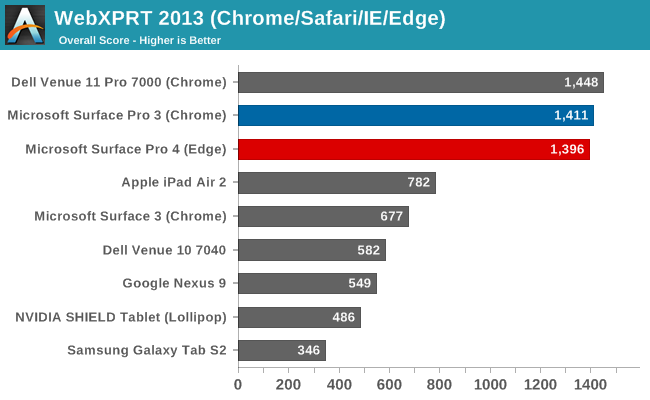 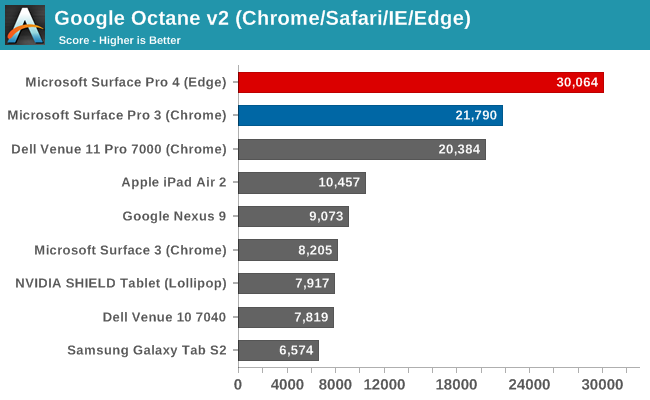 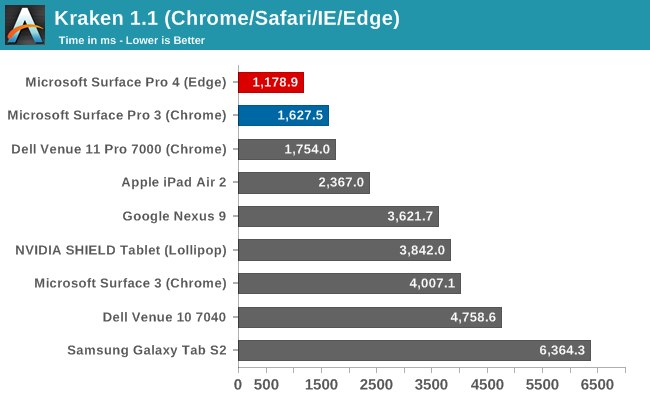 As far as tablets go, there is really nothing that comes close to the performance of Surface Pro 4. A full 15 Watt CPU (even in such a small package) affords quite a bit more performance than anything based on lower TDP ARM chips. Skylake shows some great numbers here.

Next up are the notebook workloads. Since the Surface Pro 4 is clearly aimed at Ultrabooks it has to be tested against them as well. Luckily on Windows there are plenty of options for testing performance and it is a true comparison since we don’t have to deal with comparing across platforms. 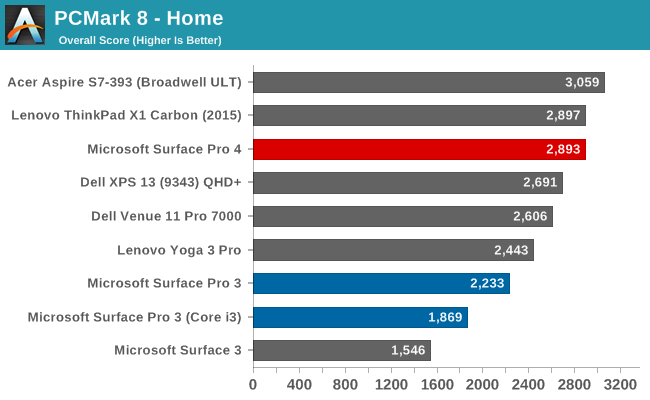 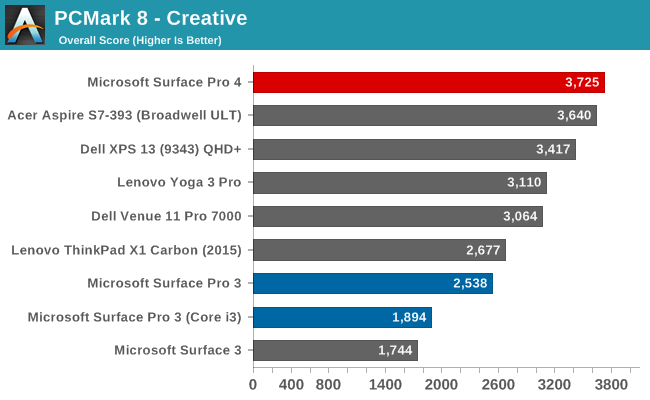 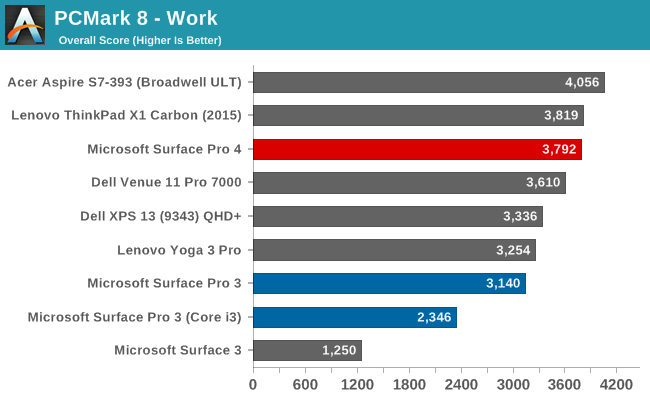 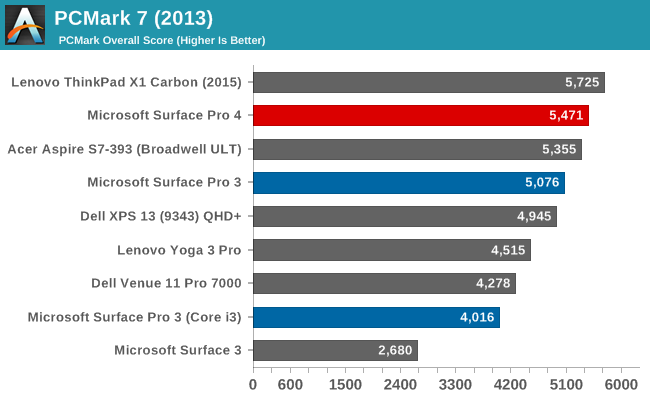 PCMark is a nice comprehensive benchmark which attempts to simulate real world workloads. Some of the tests require burst performance, some require sustained performance, and other factors like the GPU and even the display resolution come into play. The Surface Pro 4 does very well in these tests with the i5 version having as good or better performance than some of the i7 Broadwell Ultrabooks. The high resolution can hurt the scores but they are still very good. 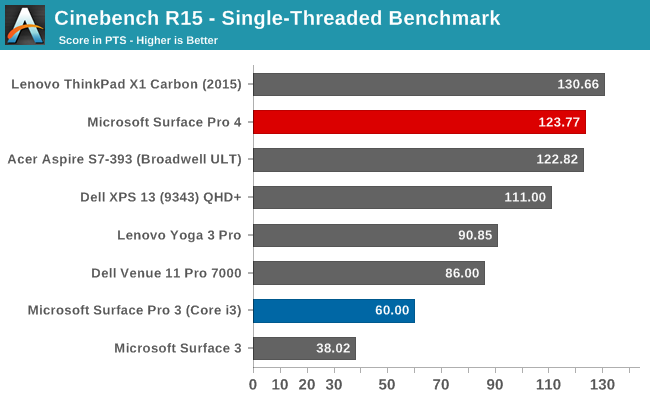 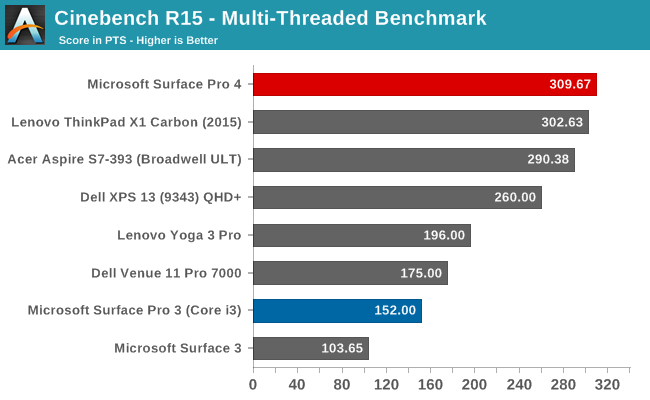 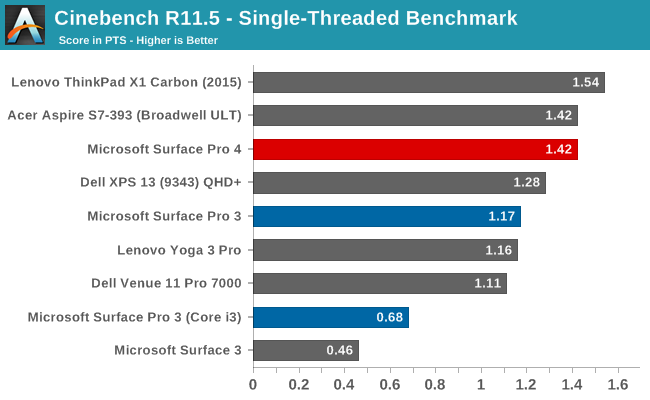 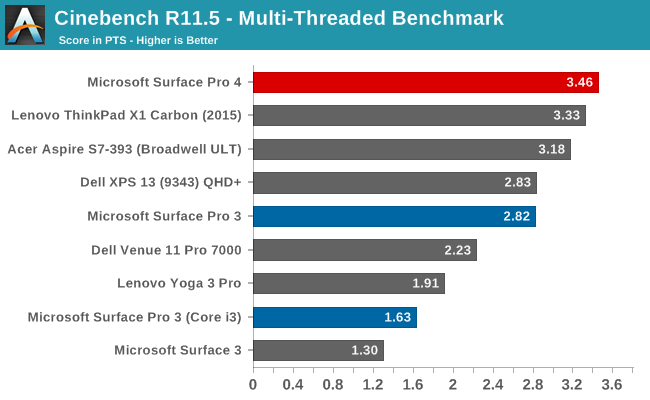 Cinebench does rendering on the CPU and loads the CPU to 100% for the duration. Higher frequencies and more cores can make a significant difference especially on the multi-threaded run of this test. Here we can see Skylake gets a fairly modest increase in performance over the Broadwell including the i7-5600U in the X1 Carbon. Multi-threaded workloads have gained the most. Compared to Surface Pro 3 which has an i5-4300U Haswell chip, the multi-threaded increase is 22.7% and the single-core score is increased 21.4%. A 20% gain over the previous model is a pretty nice amount. 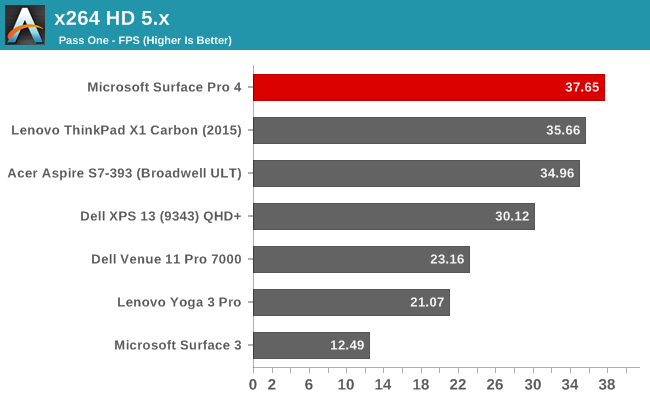 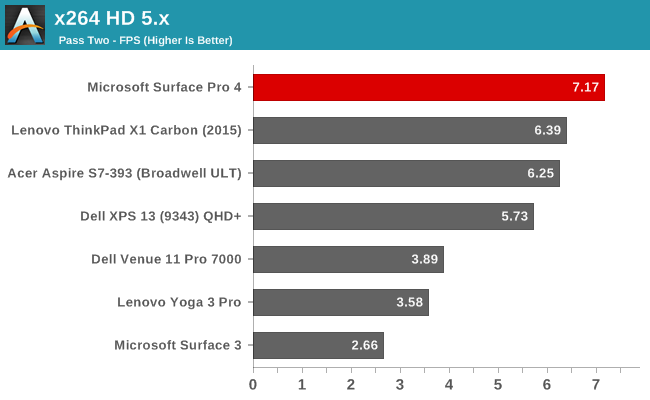 Once again this test is very much based on CPU performance. More cores and faster frequencies can make a big difference on this test, and Skylake shows another nice boost over Broadwell. It’s quicker than the i7-5600U in this test as well. Skylake didn’t get a big boost in IPC, but the efficiencies built in allow it to turbo better and longer. Not too shabby.

Once again we can take a look at browser benchmarks, but this time comparing the scores amongst other notebooks. The tests on the Surface Pro 4 were done with Edge as the browser, and most of the others with the exception of the Acer S7 were done with Google Chrome. 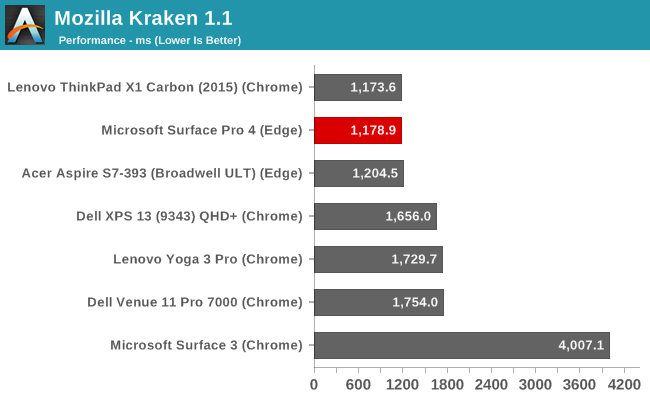 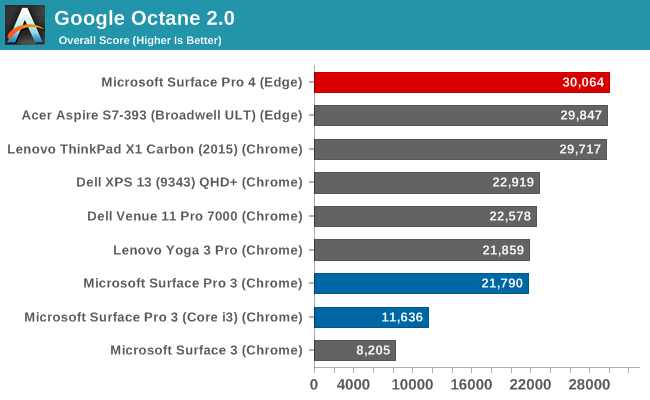 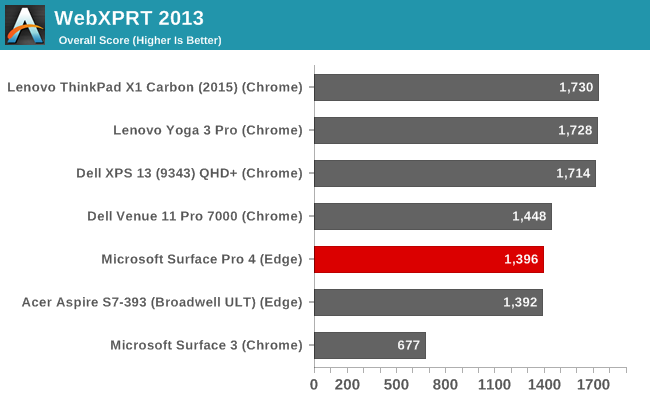 Once again the i5-6300U shows great performance in the web benchmarks. WebXPRT is the one test that Chrome shows a gain over, but since Edge is the browser that ships with the device, that is the one I want to use now that it has competitive scripting performance.

Overall, the change to Skylake has made a pretty nice jump in performance with the Surface Pro 4. The Intel Core i5-6300U manages to pretty much outperform the Broadwell Core i7-5600U in multi-threaded tests, and single-threaded workloads come in pretty close to the higher clocked Broadwell i7. The performance difference from Surface Pro 3’s Haswell Core i5-4300U is even larger.