In pretty much any smartphone, displays are going to be one of the most important aspects of the user experience. If a display is dim or has a highly reflective display it will be unreadable outdoors. If the contrast is low, the display can become difficult to read and not particularly appealing to the eye. Other issues like lack of color stability and contrast stability with changes in viewing angles will be much more noticeable than on something like a laptop or desktop where the monitor is usually kept at a constant position in space relative to the eye. In order to evaluate these factors we use both relative comparisons and absolute measurements. Although the human eye is sufficient for relative comparison, for absolute measurements we use X-Rite’s i1Pro2 spectrophotometer for precise color and luminance measurements, along with X-Rite’s i1Display Pro colorimeter for accurate contrast figures. Hardware alone is insufficient for collecting and presenting data, so we also use SpectraCal’s CalMAN 5 with a custom workflow, which allows for collecting and presenting data in a readable manner. 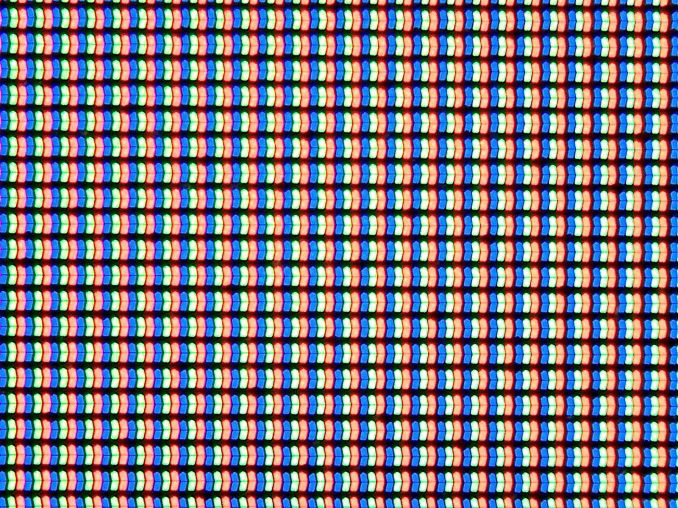 As with the iPhone 6, both the iPhone 6s and 6s Plus use dual domain pixels, which make the subpixels look more like chevrons under a microscope. This improves viewing angles by reducing the amount of color shifting that occurs when the display viewing angle is changed. As far as I can tell, Apple continues to be one of the few OEMs that pulls this off effectively. Although contrast and luminance aren’t perfectly consistent with changes in viewing angles, it basically looks like the display is painted underneath the glass. The iPhone 6s Plus does a better job at pulling off this illusion as the higher pixel density helps to eliminate some of the fuzziness or pixilation that might otherwise occur. Samsung gets close here, but for whatever reason ambient light causes noticeable interference effects and in general there’s noticeable color shift when moving the display around. Weirdly enough, the OEM that seems to be doing the best job here continues to be HTC with the One M9+. 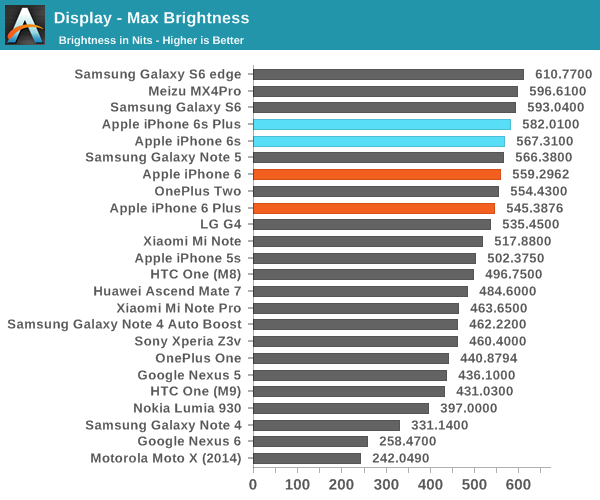 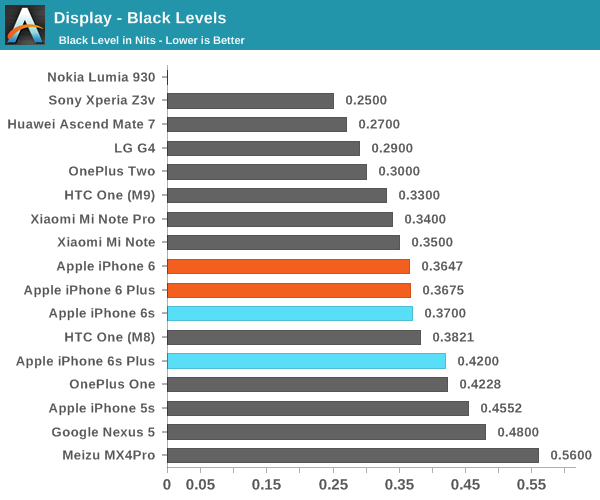 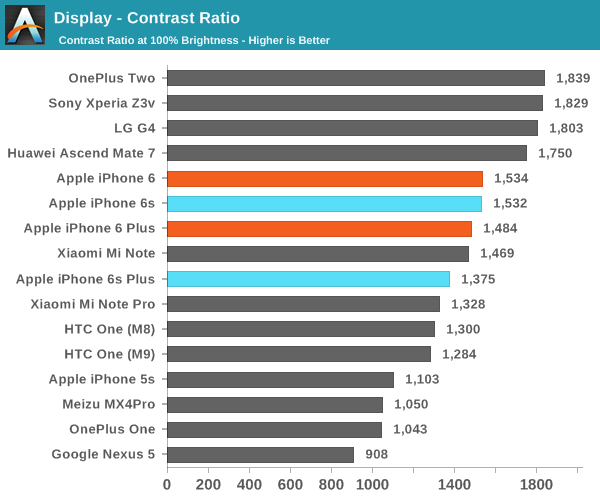 Moving on to our usual brightness and contrast testing, it looks like Apple has improved the maximum brightness of their displays with the use of the new LED backlight driver, but it’s important to note that in the case of the iPhone 6s, the maximum brightness isn’t constant. The behavior is relatively subtle, but with iOS 9 at maximum brightness the display brightness steadily lowers over the course of an hour by about 10 nits maximum. It looks like this effect tails off in both the rate of luminance decrease and overall luminance decrease as peak brightness approaches 500 nits, where the effect appears to be non-existent. It’s likely that this behavior is designed to reduce the battery impact of keeping the display at maximum brightness in all situations. Either way, peak luminance is high enough that it isn’t a struggle to read the display outdoors and contrast in low-light conditions also remains high due to the use of photo-alignment in the liquid crystal layer which helps to make the liquid crystals stay in the right shape. 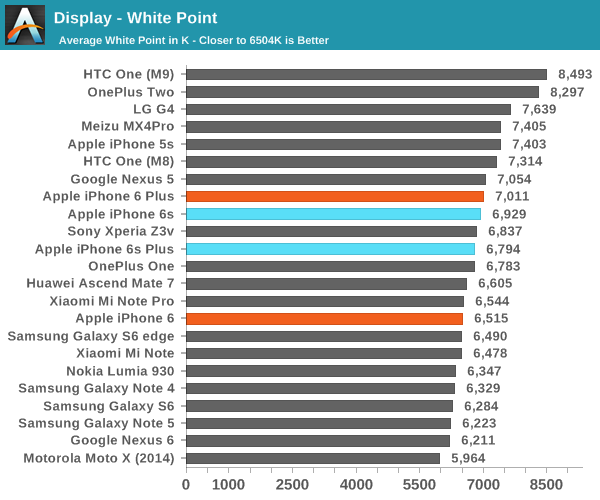 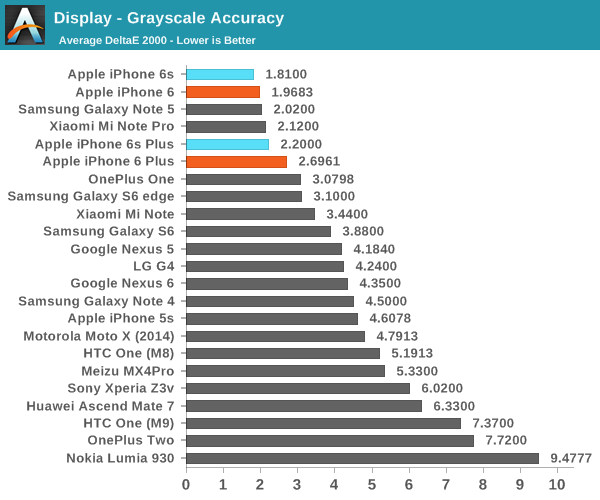 In grayscale, we don’t quite see the near-perfect white balance we saw last year but gamma remains almost impeccable when compared to the industry standard power 2.2 gamma. I suspect that the units we received this time are closer to the mean for white balance compared to last year, as in general due to the blue LED backlights used in most LCDs a colder color balance will generally require less power to display than a warmer one. 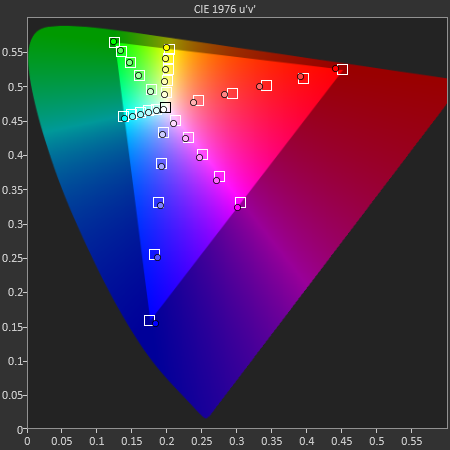 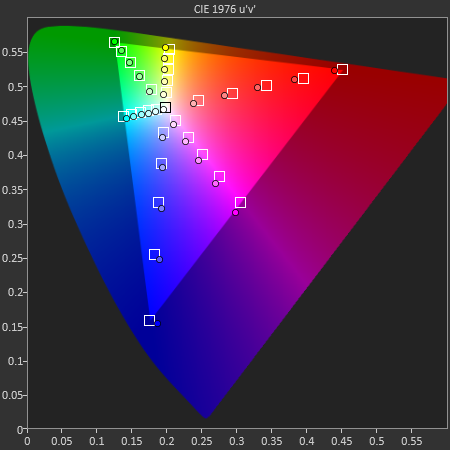 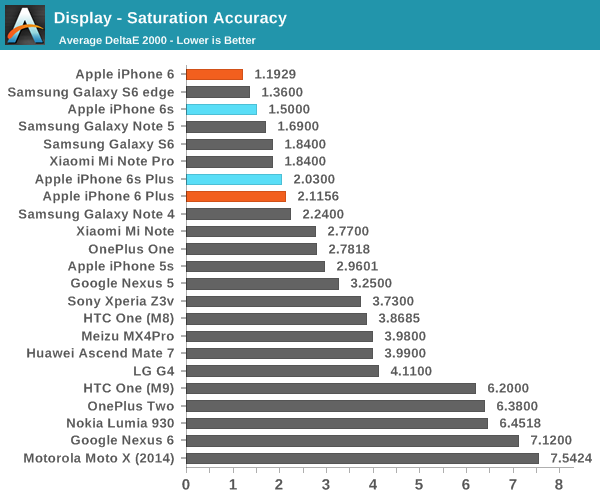 In our saturation sweep testing, the iPhone 6s and 6s Plus both continue to track closely to expected values for sRGB, which is the current industry standard color gamut. I don’t really have any criticism here. The previous iPhone’s displays were of similar caliber, so this is pretty much par for the course if you’re used to iPhone displays. 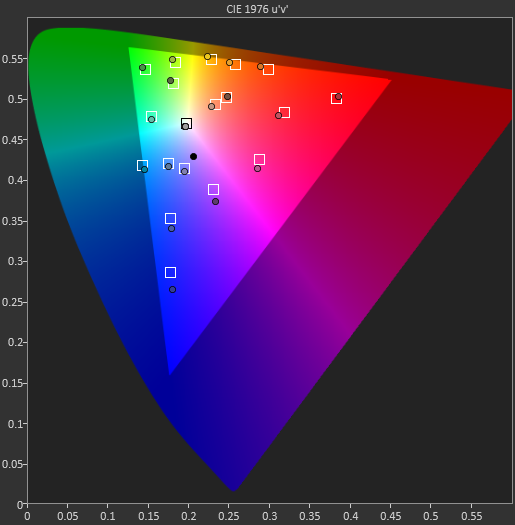 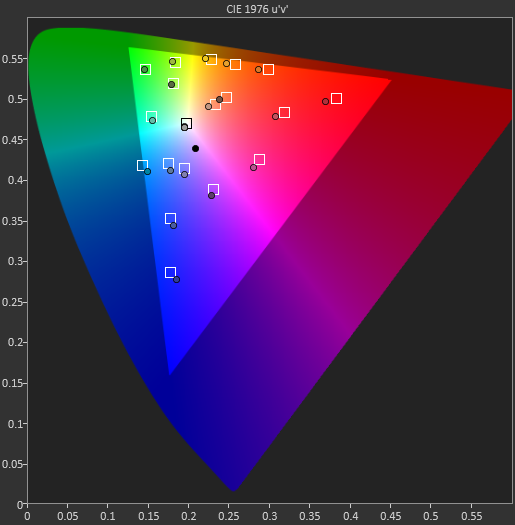 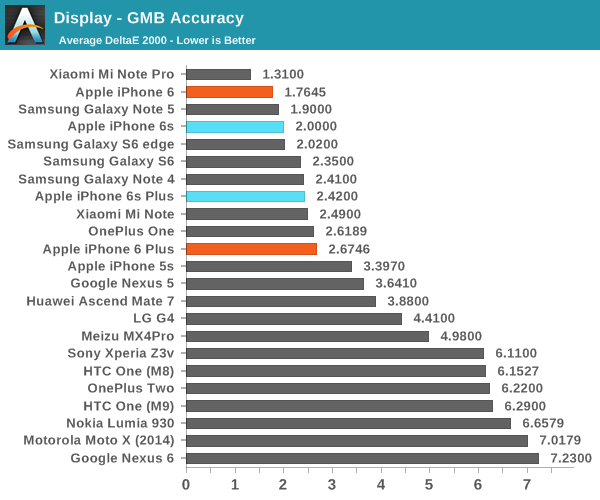 Similarly in the GMB ColorChecker, the iPhone 6s and 6s Plus both pass with flying colors. If you’re using an iPhone 6s or 6s Plus for any remotely color-critical work like viewing and/or editing photos and videos, it’s a pretty fair bet that you’ll be able to rely on these phones to provide an accurate color reproduction in pretty much any condition. Samsung does provide better contrast and the possibility of extra color saturation with their Galaxy S6 and Note 5, but this comes at the cost of potential for burn-in, increased power consumption in certain scenarios, and increased distortion with changes in viewing angles. I think this means that it basically comes out to a wash, but depending upon personal taste one may prove to be better than another.