Internet Explorer has been the one browser from Microsoft for around twenty years. Just think about that for a moment. Twenty years ago, there was just the beginnings of what we all now take for granted, that being the internet. Over the years, it has evolved from version 1 to 11, with some sticking points along the way, such as IE 6 which came standard with Windows XP back in 2002. Over time, it has evolved like all software does, but Microsoft had to balance the needs of the web with the needs of its clients, and they did not always get this balance right.

Internet Explorer certainly has some good features, but it has been dragged down by the backwards compatibility built in to ensure that business customers who built line-of-business apps on Internet Explorer would be able to have a platform that worked for them.

To this end, the decision was made to stop developing Internet Explorer, and with Windows 10 we get a new browser called Microsoft Edge. It is still based on the same rendering engine and scripting engine as IE 11, but hundreds of thousands of lines of code related to backwards compatibility have been removed in an effort to streamline development, increase performance, and reduce the attack surface. All of the traditional IE features have been deprecated, such as ActiveX controls, plug-ins, and more. 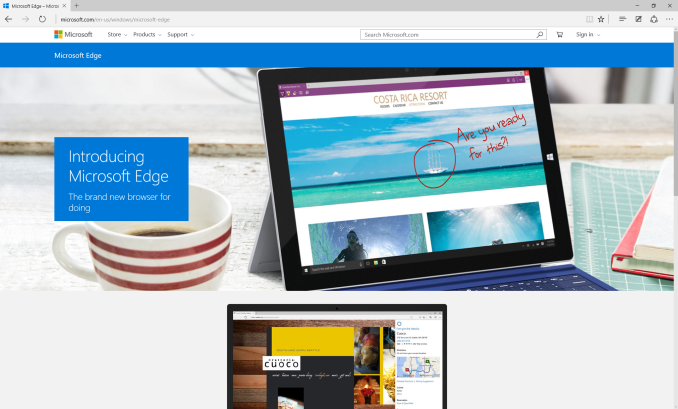 What that leaves is a much leaner browser, and Microsoft has committed to better web standards support, which should lead to more compatibility with the modern web. Edge with experimental support is currently supporting more of the ECMAScript 6 feature set than any other browser. That is a big step up from IE which has lagged behind most other browsers on support of these features.

Another thing that IE lacked was performance, and Edge has made tremendous gains here. As seen in our tests of several common web benchmarks, Edge now has performance very close, or even above, other desktop browsers. Websites these days are heavily scripted, and having strong performance is important for how the device feels, but it can also help out with battery life, since you will spend less time working. The gains have been large, and hopefully Microsoft won’t rest on its laurels here and allow this performance to fall back as it did with Internet Explorer.

Edge also brings some new features to the table. Cortana is likely the biggest and most likely to be used. We’ll cover Cortana some more later, but being able to search within a page for contextual results is a fantastic feature. Cortana also lives in the address bar, and is available to serve up answers to questions as you type them. You can check the weather, or stocks, or other things right from the address bar.

Another feature that Microsoft has been touting on Edge since it was first announced as Project Spartan is support for annotation of websites using a keyboard, mouse, touch, or stylus. You can markup pages, and then share them with your thoughts to anyone. It’s certainly a neat feature, and I’m sure some people will love it, but when you get to what’s missing from Edge, as I will in a moment, you have to wonder if the time spent developing this might not have been more useful somewhere else. 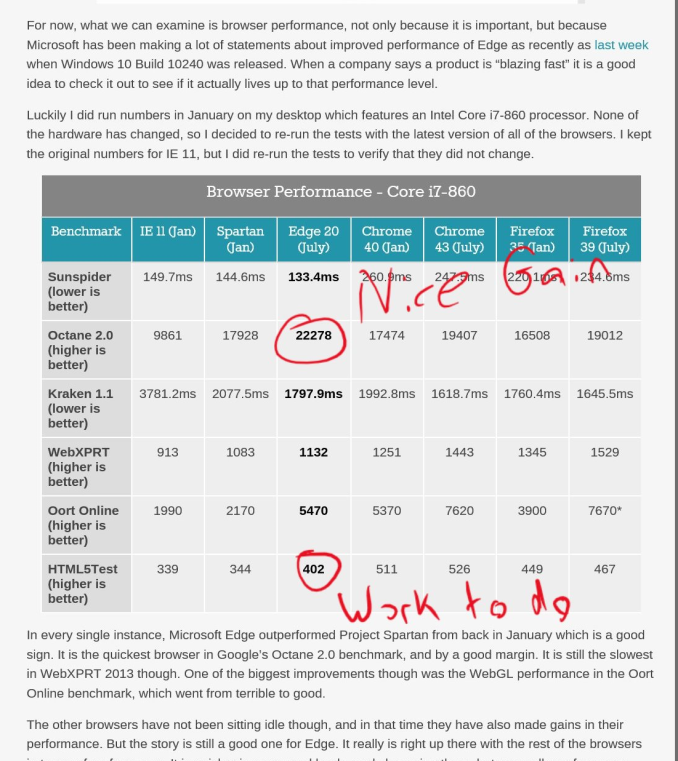 Edge also has built in support for a reading list, so you can mark pages that you want to check out later. Favorites are of course still available, and if you are so inclined you can enable the favorites bar to be always available, rather than tucked away into a menu.

So the new browser is faster, smarter, has new features, and is, at least in my opinion, a nice clean look. So we should all use Edge right? Well, maybe, but Edge is clearly still a work in progress.

While Edge performs well on our browser benchmarks, it can still stumble on certain pages. Twitter is the most obvious example for me, and at times Twitter can almost grind to a halt in Edge. It can really start to chew into CPU and memory depending on the sites that are left open. However I’m told that they know about Twitter and are trying to get to the bottom of it.

Another huge issue for me is the lack of extension support. As of today, Edge has no support for any extensions, although it does have Adobe Flash built in (and that can be disabled) which is unfortunately still a necessity on the web. I’m a big user of password managers and other tools, and not having them available is difficult. This, at least, is a temporary situation. Edge is going to get extension support, likely within a couple of months, and the extension model will be very similar to Google’s Chrome browser which should let developers easily add support for Edge. Extensions will also be available in the store to provide an easy way to add them in without (hopefully) breaking the security model.

But that’s not all. Edge is also missing obvious things like being able to choose where to download a file. And even downloading is not always an option. If you click on certain file links, it will automatically download to the Downloads folder (which there is no option in Edge to change at the moment) but other files, such as .mp3 files, don’t download and instead start to play. There is no Save As option in the right click menu, so if the file is something that Edge can open, it will open it, and not give you the option to save. This is pretty basic functionality that does not yet exist.

Edge also has only partial support for cloud sync between devices for history, passwords, or anything else. I have to think that this is coming later, but reviewing the product today means that this is also missing. What would be very nice is if the Reading List would sync, so you could easily add from one device for later viewing on another. Hopefully this gets some high priority after extensions.

So with all of this missing functionality that we have taken for granted, even in Internet Explorer, using Edge can sometimes feel like a step backwards. These are certainly early days for the product, and it shows its rough edges a bit more than some of the other parts of Windows 10. But, I still use Edge as my default browser in Windows 10, despite its flaws. Yes, I have to use other browsers sometimes in order to do certain tasks, but Edge has some other nice features that I have come to like. 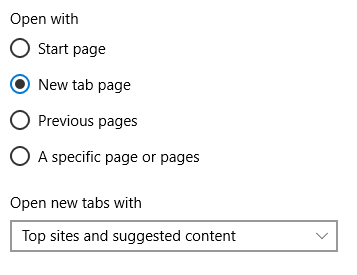 When you start Edge, you can set it to open a home page, blank page, start page, new tabs, or previous pages. The new tabs page can also be set to offer a blank page, top sites, or top sites and suggested content. The suggested content is news, sports, and finance information from the MSN portal, presented in a grid. Although I thought this might be a bit much, I have found that I do find a lot of the content interesting, and it keeps me abreast of what is going on. There is weather, sports scores, and more. It certainly is not going to be for everyone, but I’ve found I really like having this new content always available.

I also find that Edge has much better text rendering that Google Chrome, which is my number two browser. Fonts are a lot more defined and easier to read. Here’s a screenshot of text from both browsers.

Edge, like all of the built-in apps, is one that can scale across different device types, and the touch support is very good. Using Edge on a tablet with touch is no problem at all, even though I kind of preferred the address bar being on the bottom of the page as it was in the touch version of IE, and you can no longer go back by swiping the page to the right, instead relying on the back button.

Still, looking at Edge today shows that it is a mixed bag. Performance is good, the looks and feel of the browser is easy to get adjusted to, and the new features like built-in Cortana support can be excellent. However with the lack of extensions, and some of the missing functionality that you may have taken for granted with other browsers might make it a problem for you to use at the moment. My advice is to give it a shot, but if you can’t live without certain features then Edge will not be the browser for you until such time as it gets them. The good news is that Microsoft has promised much quicker updates with Edge, and that will be helped since it can now be updated through the Windows Store.